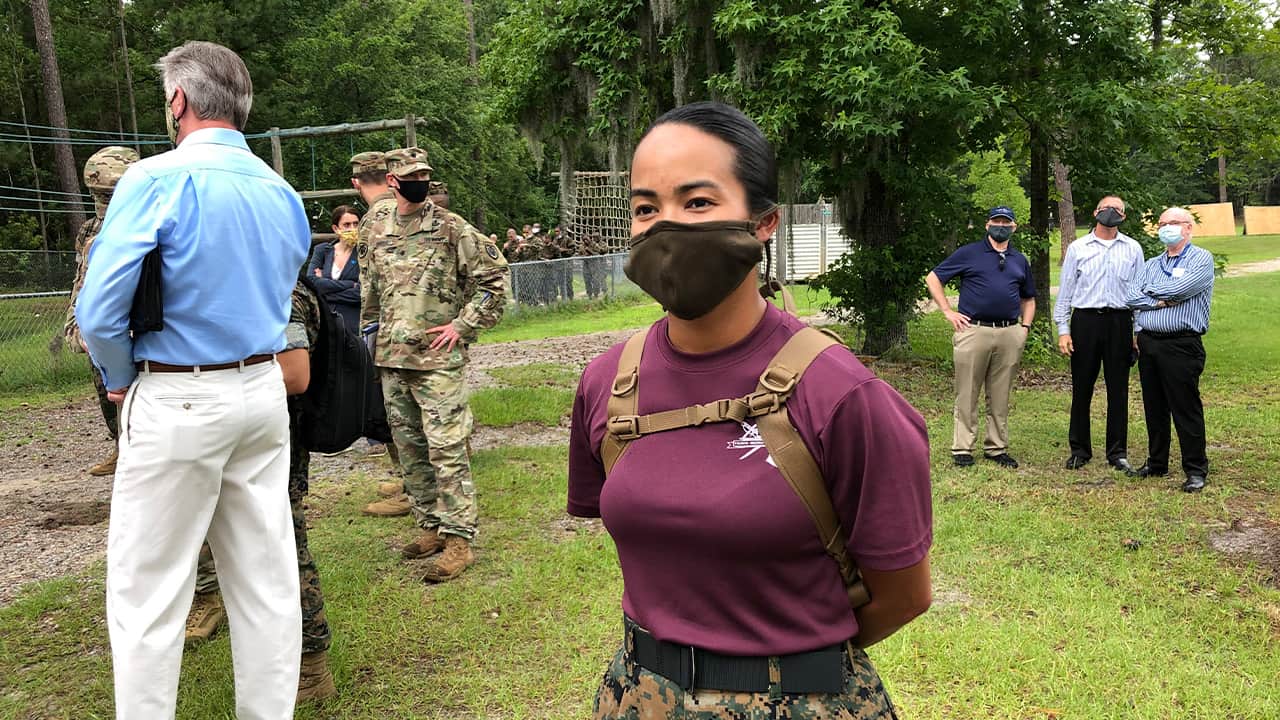 PARRIS ISLAND, S.C. — The booming shouts of the rain-soaked Marine recruits echo across Leatherneck Square training field, barely muffled by their masks. And as they jog by, belting out responses to drill instructors in a rhythmic cadence, the white fabric across their faces is the only telltale sign of the coronavirus’ effects on their quest to become Marines.

“They are singularly focused on two weeks of mental and emotional prep for what you guys are seeing today. I think it’s pretty evident it’s making a difference. They’re mentally focused and have reconciled why they’re here.” — Defense Secretary Mark Esper

But in ways big and small, the virus is impacting training at the Marine Corps’ Parris Island Recruit Depot and across the military. And defense leaders say some of the adjustments are proving beneficial and could become permanent.

“They are singularly focused on two weeks of mental and emotional prep for what you guys are seeing today,” he said during a visit Wednesday by Defense Secretary Mark Esper. “I think it’s pretty evident it’s making a difference. They’re mentally focused and have reconciled why they’re here.”

Until this week, recruits spent the two-week quarantine in a complex of large white tents and bathroom and shower trailers that was quickly built on the base to allow health monitoring and keep them isolated. But now recruits are spending the two weeks in dorms at the Citadel, the Marine college in Charleston, about a two-hour drive north.

Esper, who toured the tent area with Glynn, said the new precautions — including masks, social distancing and the quarantine — have greatly lowered the amount of other respiratory illnesses recruits traditionally get.

“They’ve seen a much lower sick call right across the board when it comes to infection, so they’re going to keep that. And we’re going to keep some other practices,” said Esper, adding that by breaking the recruits into smaller groups, “they’ve seen a higher level of unity and esprit. And they bonded much more quickly.”

As Esper walked around the soggy field, recruits were going through what Marines call the “confidence course.” They were clambering over large log obstacles, climbing towers, shimmying across rope lines strung over a net, and swinging over streams of water. In other sections, recruits were paired off to battle with pugil sticks, which replicates rifle and bayonet combat.

Staff Sgt. Katheryn Hunter, a drill instructor for three years at Parris Island, said the main difference she sees due to the virus is that the number of female recruits she has in 4th Battalion, Oscar Company, has dropped to 70. And she has 35 recruits in squad bays that usually hold up to 64.

During the initial portion of training, women, who have their own battalion, are largely separated from men. Marine Corps leaders staunchly defend the segregation, saying it helps build confidence, but some members of Congress have demanded change.

The course, Hunter said, is critical.

In the larger formations, the recruits wore masks, but during some physical tests — even those where teamwork was required and social distancing impossible — the masks came off. Most of the drill instructors wore theirs at all times, as did Esper and his entourage.

Commanders noted that the recruits had finished their two-week quarantine and were on day 14 of their actual training — so they had been largely isolated for about a month. Marine recruits go to either Parris Island or to Camp Pendleton in southern California, for 13 weeks of training.

Another change, Esper said, is that military recruits often get to go home for two weeks after graduation. That leave has been suspended because of the virus. Instead, the Marines are getting three or four days of little or no duty before reporting to their next schooling or station.

The Army has made similar changes in its recruit training, which is a longer, 22-week course for infantry and armor soldiers. But instead of separating the incoming recruits at a distant location for the two-week quarantine, Army leaders changed the course schedule.

Glynn said the plan to use the Citadel for quarantine was inspired by his mother-in-law, who sent him an article about how colleges and the military worked together during the Spanish flu pandemic. But while the college, with its two-person rooms, is working out well, Glynn said he’ll need another solution when classes resume. He said they are reviewing several options, including some nearer Parris Island, but have not made a decision.

The Army has made similar changes in its recruit training, which is a longer, 22-week course for infantry and armor soldiers. But instead of separating the incoming recruits at a distant location for the two-week quarantine, Army leaders changed the course schedule.

The new plan shifted classroom learning to the first two weeks, with many classes done virtually or outside, with little physical interaction, spaced chairs and social distancing. The recruits then move into what Army officials described as a training bubble, where they begin their more traditional physical and combat instruction.

Both the Marine Corps and the Army screen recruits for the virus when they arrive at processing stations, and again when they get to the training base. Army recruits go to one of the four training centers at Fort Benning, Georgia; Fort Jackson, South Carolina; Fort Leonard Wood, Missouri; and Fort Sill, Oklahoma.

Defense leaders said they have been intrigued to see some good come from the virus precautions.

“I mean, it’s funny,” said Esper, as he flew home from Parris Island, “Even once coronavirus fades or we have a vaccine, you may come out with a boot camp that produces a better product because of things learned.”