Police Across US Speak out Against Minneapolis Custody Death 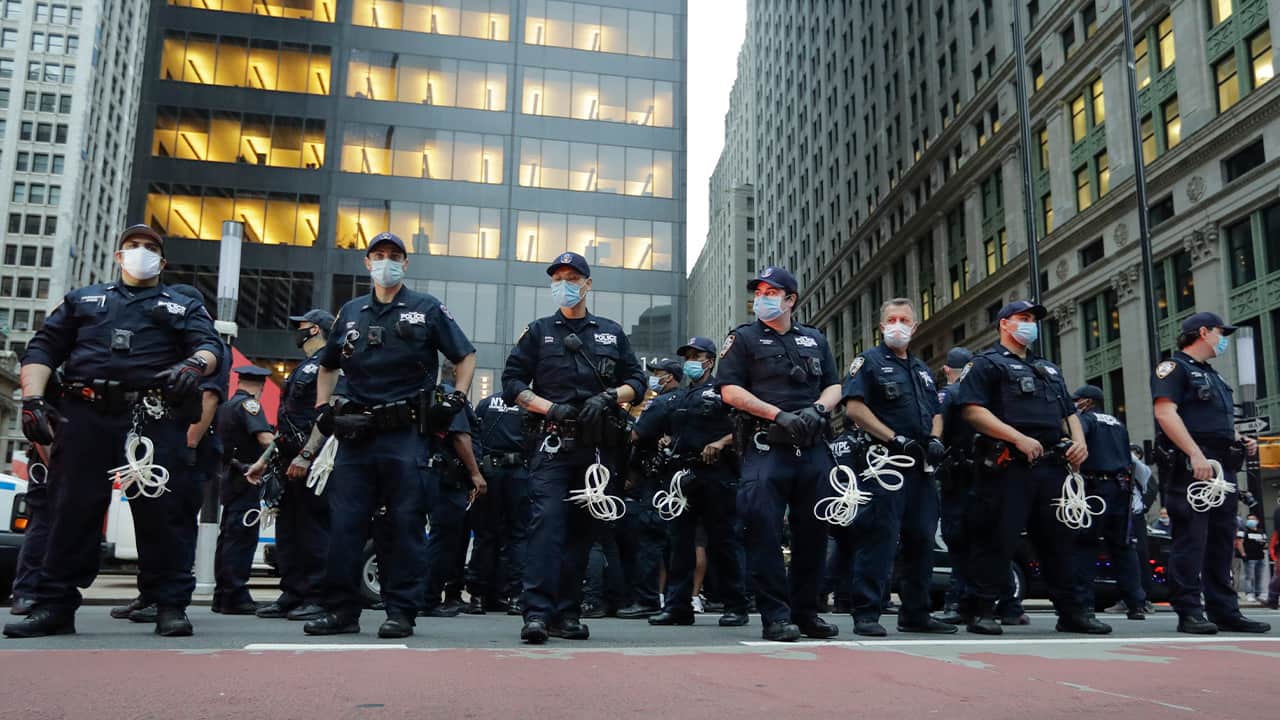 LOS ANGELES — Murder. Brutality. Reprehensible. Indefensible. Police nationwide, in unequivocal and unprecedented language, have condemned the actions of Minneapolis police in the custody death of a handcuffed black man who cried for help as an officer knelt on his neck, pinning him to the pavement for at least eight minutes. 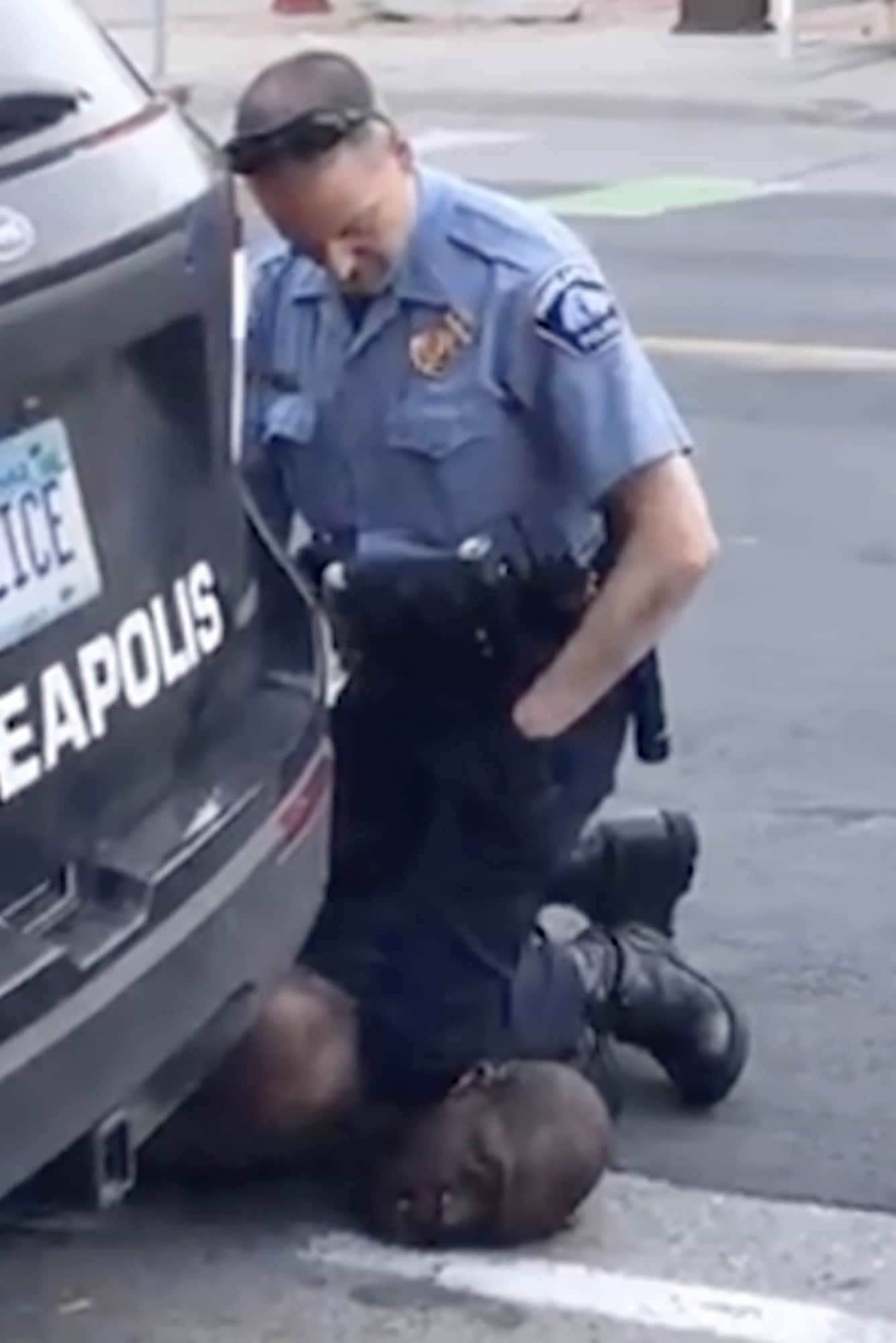 In this Monday, May 25, 2020, frame from video provided by Darnella Frazier, a Minneapolis officer kneels on the neck of a handcuffed man who was pleading that he could not breathe in Minneapolis. (Darnella Frazier via AP)

But some civil rights advocates say their denunciations are empty words without meaningful reform behind them.

Authorities say George Floyd was detained Monday because he matched the description of someone who tried to pay with a counterfeit bill at a convenience store, and the 46-year-old resisted arrest. A bystander’s disturbing video shows Officer Derek Chauvin, who is white, kneeling on Floyd’s neck, even as Floyd begs for air and slowly stops talking and moving.

“There is no need to see more video,” Chattanooga, Tennessee, Police Chief David Roddy tweeted Wednesday. “There no need to wait to see how ‘it plays out’. There is no need to put a knee on someone’s neck for NINE minutes. There IS a need to DO something. If you wear a badge and you don’t have an issue with this … turn it in.”

The reaction from some law enforcement stands in stark contrast to their muted response or support for police after other in-custody fatalities. Sheriffs and police chiefs have strongly criticized the Minneapolis officer on social media and praised the city’s police chief for his quick dismissal of four officers at the scene. Some even called for them to be criminally charged.

“I am deeply disturbed by the video of Mr. Floyd being murdered in the street with other officers there letting it go on,” Polk County, Georgia, Sheriff Johnny Moats wrote on Facebook. “I can assure everyone, me or any of my deputies will never treat anyone like that as long as I’m Sheriff. This kind of brutality is terrible and it needs to stop. All Officers involved need to be arrested and charged immediately. Praying for the family.”

‘Any Minute Progress Is Seen as Miraculous’

Typically, police call for patience and calm in the wake of a use of force. They are reluctant to weigh in on episodes involving another agency, often citing ongoing investigations or due process.

“Not going hide behind ‘not being there,’” tweeted San Jose Police, California, Chief Eddie Garcia. “I’d be one of the first to condemn anyone had I seen similar happen to one of my brother/ sister officers. What I saw happen to George Floyd disturbed me and is not consistent with the goal of our mission. The act of one, impacts us all.”

But Gloria Browne-Marshall, a civil rights attorney and professor at the John Jay College of Criminal Justice, said she wouldn’t be a “cheerleader” for a “handful” of chiefs who harshly decried the officers’ behavior.

“Any minute progress is seen as miraculous because so little has been done for so long,” she said. “It’s nothing close to progress or what outrage would be taking place if it was a white man as the victim of this assault.”

Abdullah said the three other officers who witnessed Chauvin’s actions and did not intervene contributed to a long-standing system of police racism and oppression against people of color.

“We’ve got to remember that it was not just Officer Chauvin who was sitting on George Floyd’s neck,” she said.

Abdullah and hundreds of others protested what she called Floyd’s lynching on Wednesday night. Some blocked lanes of a freeway and shattered windows of California Highway Patrol cruisers. 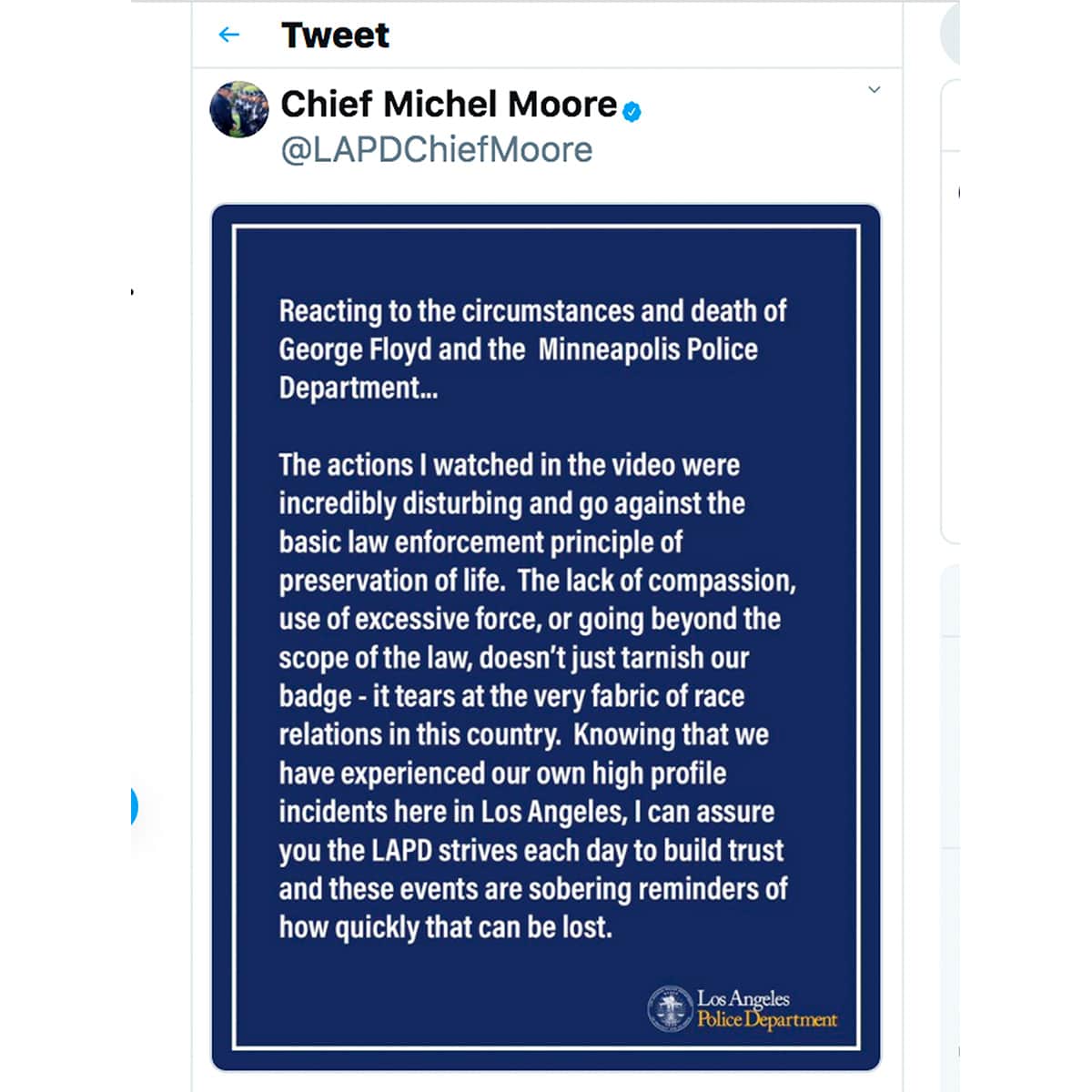 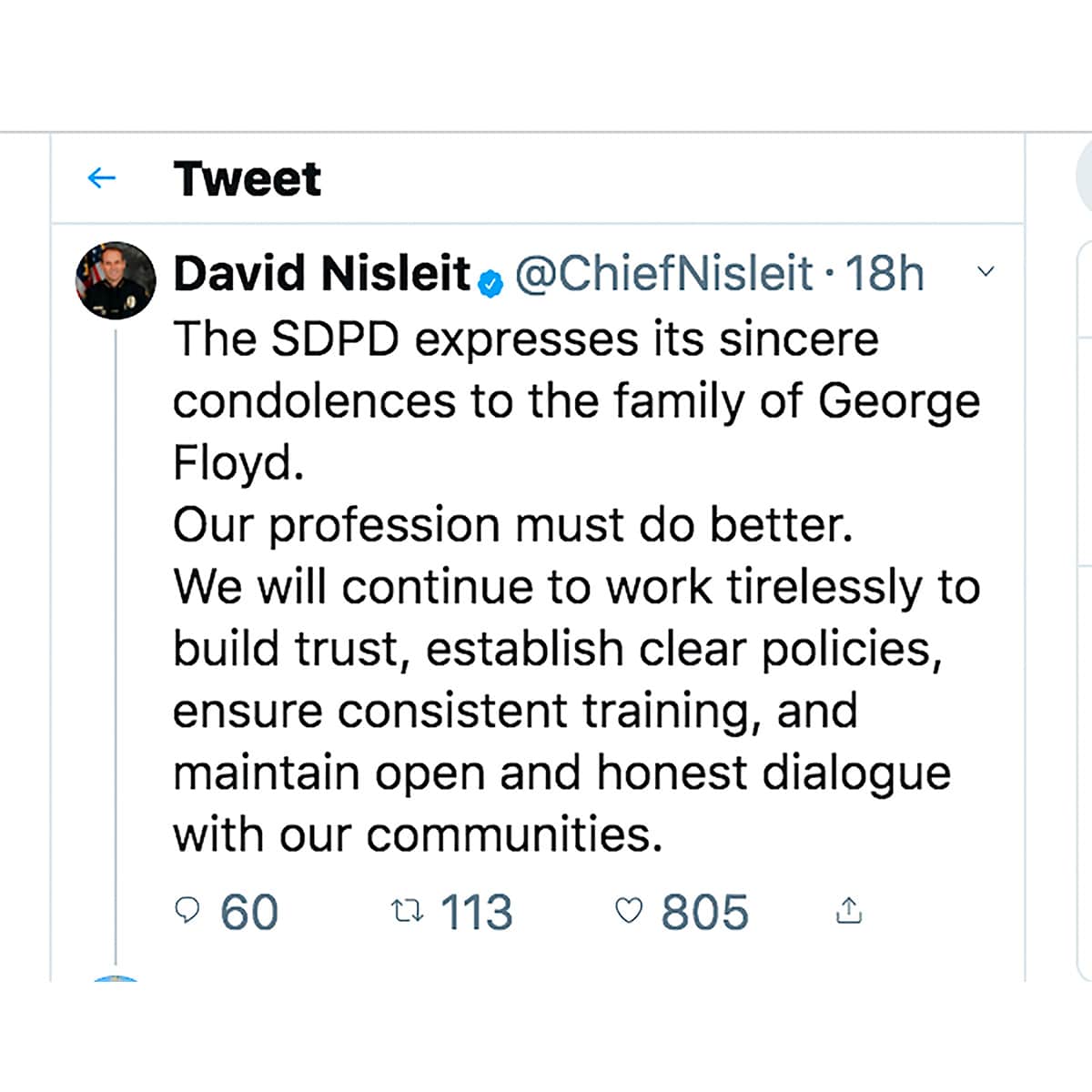 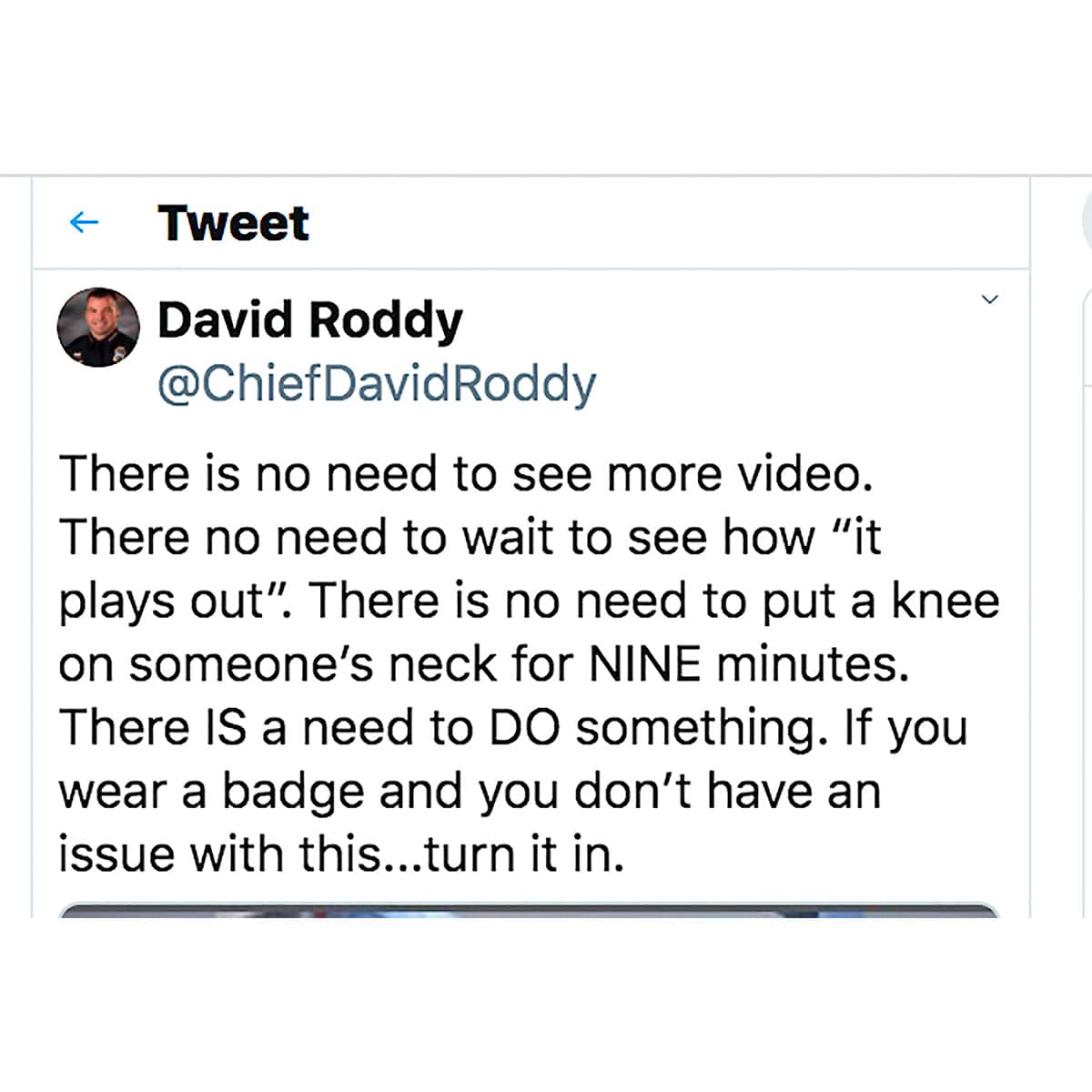 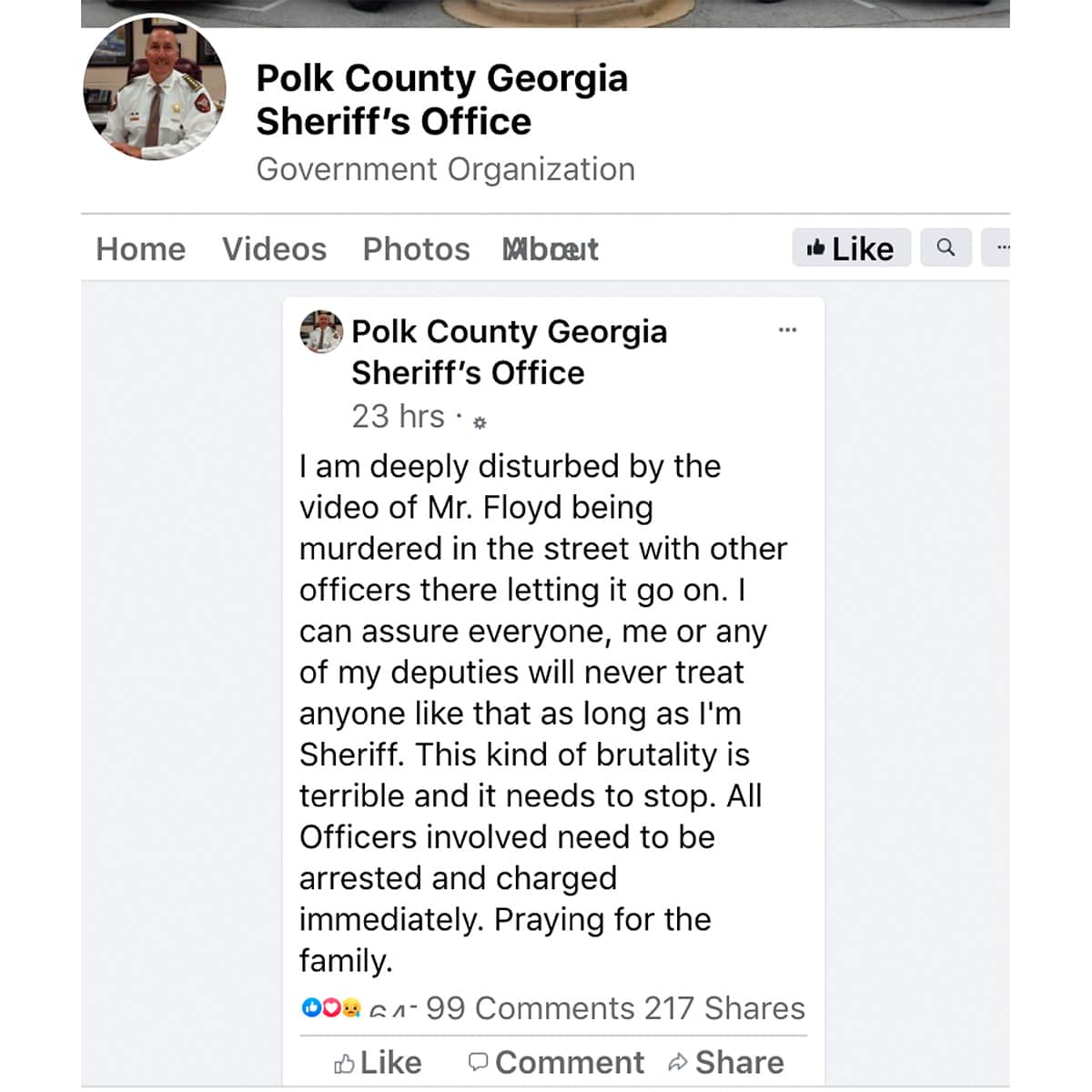 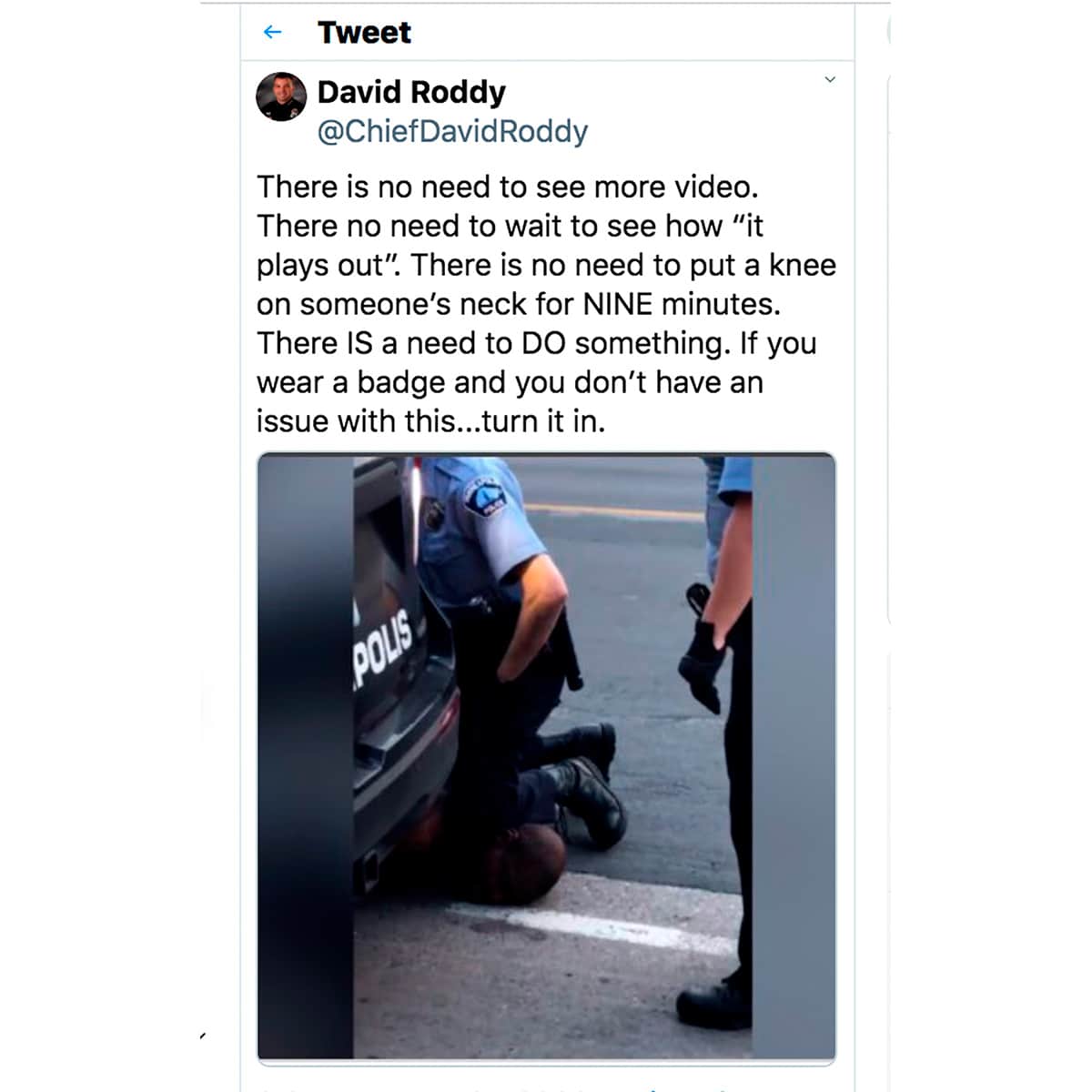 ‘What We Saw in Minnesota Was Deeply Disturbing. It Was Wrong.’

Minneapolis is bracing for more violence after days of civil unrest, with burned buildings, looted stores and angry graffiti demanding justice. The governor on Thursday called in the National Guard. On Thursday night, protesters torched a Minneapolis police station that the department was forced to abandon.

The heads of the Los Angeles and Chicago departments — both of which have been rocked before by police brutality scandals — addressed Floyd’s death and its potential effect on race relations between law enforcement and communities of color.

Even the New York Police Department weighed in. Eric Garner died in the city in 2014 after he was placed in a chokehold by police and uttered the same words Floyd did: “I can’t breathe.”

It took city officials five years to fire the officer, and no criminal or federal charges were brought.

“What we saw in Minnesota was deeply disturbing. It was wrong,” NYPD Commissioner Dermot Shea wrote Thursday. “We must take a stand and address it. We must come together, condemn these actions and reinforce who we are as members of the NYPD. This is not acceptable ANYWHERE.”

Before he was commissioner, Shea spearheaded the NYPD’s shift to community policing that moved away from a more confrontational style favored by other commissioners after Garner’s death.

Harris County, Texas, Sheriff Ed Gonzalez, who also spoke out online, told The Associated Press that law enforcement agencies keep promising reforms in the wake of fatalities, but they are “not delivering it on a consistent basis.”

“When bad things happen in our profession, we need to be able to call it like it is,” he said. “We keep thinking that the last one will be the last one, and then another one surfaces.”