NEW YORK — Minnesota Gov. Tim Walz apologized to CNN, saying he takes total responsibility for the arrest of one of the network’s crews Friday as they reported on violent protests in Minneapolis following the death of George Floyd.

“This is a very public apology to that team,” Walz said at a news conference hours after correspondent Omar Jimenez and two colleagues were taken into custody by the Minnesota State Patrol and later released.

CNN’s @OmarJimenez and his crew have been released from police custody. He recounts getting arrested and what happened while they were in custody. https://t.co/v3kMq77Oro pic.twitter.com/JoqmwlTc5i

Jimenez was handcuffed and led away while reporting live on the air shortly after 5 a.m. Central Time. His colleagues Bill Kirkos and Leonel Mendez were also taken away, with Mendez placing his still-running camera on the ground to record his arrest.

When first approached by officers, Jimenez, who is black, told them, “put us back where you want us. We are getting out of your way.”

The Minnesota State Patrol said on Twitter that the journalists were among four people arrested as troopers were “clearing the streets and restoring order” following the protests. Floyd died on Memorial Day shortly after being taken into custody on suspicion of passing a bad check and a white police officer knelt on his neck.

The patrol said the CNN journalists “were released once they were confirmed to be members of the media.”

Jimenez was holding what appeared to be a laminated ID card before he was handcuffed, and his fellow crew members told police that they were from CNN and showing the scene live on the air. 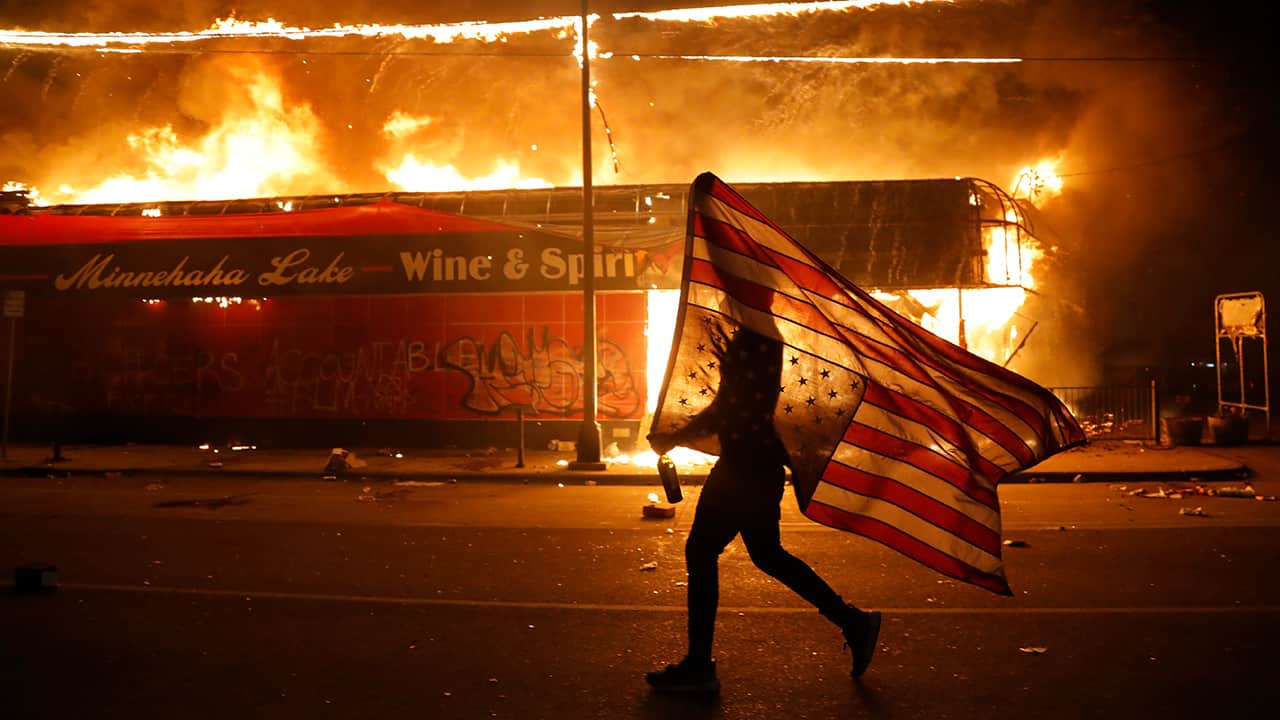 A protester carries a U.S. flag upside, a sign of distress, next to a burning building Thursday, May 28, 2020, in Minneapolis. Protests over the death of George Floyd, a black man who died in police custody Monday, broke out in Minneapolis for a third straight night. (AP Photo/Julio Cortez)

The National Association of Black Journalists Condemned the Arrest of Jimenez

CNN chief executive Jeff Zucker quickly called Walz demanding to know what happened, the governor said. The crew was released within an hour.

After being led out of a police van and released, Jimenez said he was confused about what happened since he had been showing his credentials to authorities while covering the story all week. He said he was glad that his arrest was shown on the air.

“You don’t have to doubt my story,” he said. “It’s not filtered in any way. You saw it for your own eyes. That gave me a little bit of comfort. But it was definitely nerve-wracking.”

The National Association of Black Journalists condemned the arrest of Jimenez.

“We are relieved to see Omar has been released, but we are still disturbed by the apparent violation of First Amendment rights that are the bedrock of journalism,” NABJ tweeted Friday. Similarly, CNN competitors MSNBC, CBS News and Fox News all condemned the arrest.

The Silha Center for the Study of Media Ethics and Law at the University of Minnesota also denounced the arrests.

“The CNN crew, as well as all journalists, have a First Amendment right to cover the protests,” said Jane E. Kirtley, Silha Professor of Media Ethics and Law and director of the Silha Center.

Walz said it was important for all journalists covering the story to know that their safety was a top priority.

“We have got to ensure that there is a safe spot for journalism to tell this story,” he said.