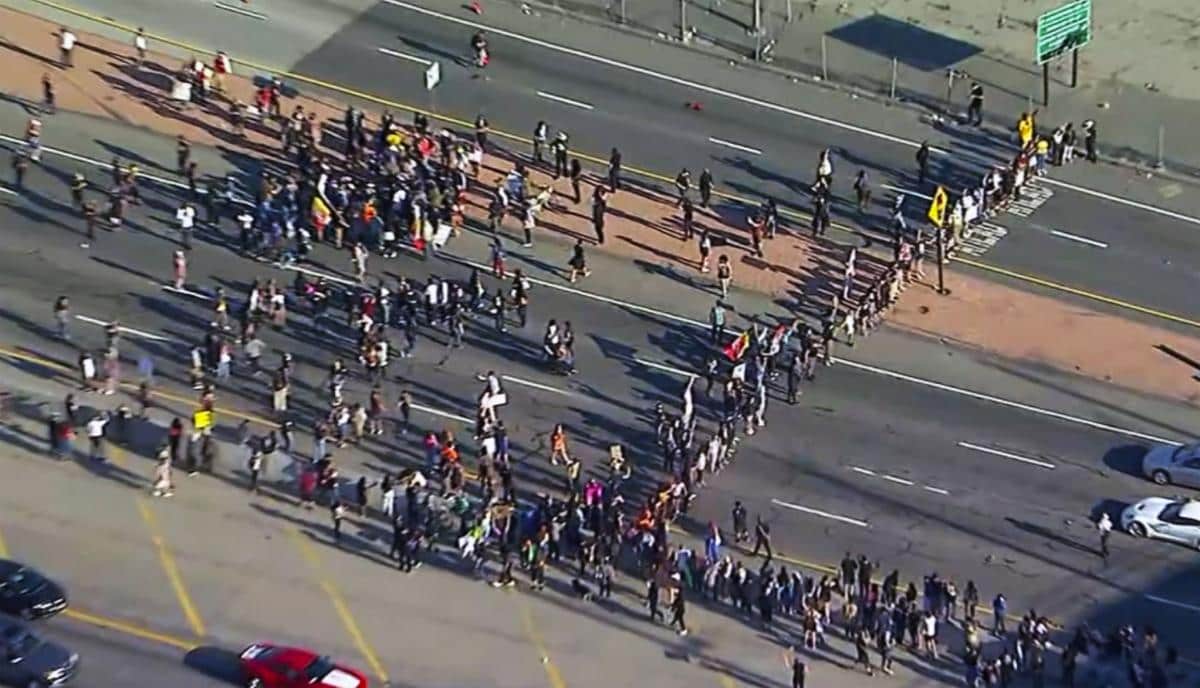 One demonstrator who jumped from another police vehicle was possibly injured in the rally by Black Lives Matter and other protesters. Hundreds of demonstrators gathered in the late afternoon on downtown streets and eventually moved towards U.S. 101. Dozens walked into lanes despite police efforts to keep them away.

When a CHP patrol car arrived, demonstrators surrounded it. The car’s back window was smashed by a skateboard and it jerked forward and moved away with several protesters who had jumped onto the hood. Television news footage showed one man finally hopping or jumping from the side of the moving car and then flopping onto the ground.

A second CHP car arrived and was attacked, with one demonstrator hurling what appeared to be a board through the back window before it moved off.

It wasn’t immediately clear whether the man on the ground was seriously injured but protesters surrounded him and others formed a line across the lanes to prevent traffic from moving forward.

Firefighters then arrived and took the man away on a gurney. He was upright and raised one hand in a salute or protest. He was expected to be evaluated at a hospital.

After about 20 minutes, the crowd then began streaming away from the freeway.

Traffic was blocked but appeared to be lighter than during a normal rush hour because of coronavirus restrictions. Most demonstrators weren’t wearing masks or following social distancing suggestions aimed at preventing the spread of COVID-19.

The protest was organized by the group Black Lives Matter-LA. At its peak, hundreds of people gathered outside the Los Angeles County Hall of Justice.

The demonstration lasted for several hours and was mostly peaceful. No arrests were immediately made, Los Angeles police Officer Mike Lopez said.

The gathering coincides with a large protest in Minneapolis after a white police officer there was seen on video with a knee against the neck of a handcuffed black man who complained that he could not breathe.

Based on the video, Mayor Jacob Frey said officer Derek Chauvin should be charged in the death of George Floyd, who died in police custody.

In a statement, Los Angeles Police Chief Michel Moore said the actions in the video were “incredibly disturbing and go against the basic law enforcement principle of preservation of life.” He said they showed lack of compassion and use of excessive force.

California Senate Plan Would Reject Most of Governor’s Cuts