Thousands Wait to Take Us Citizenship Oath Amid Virus Delays 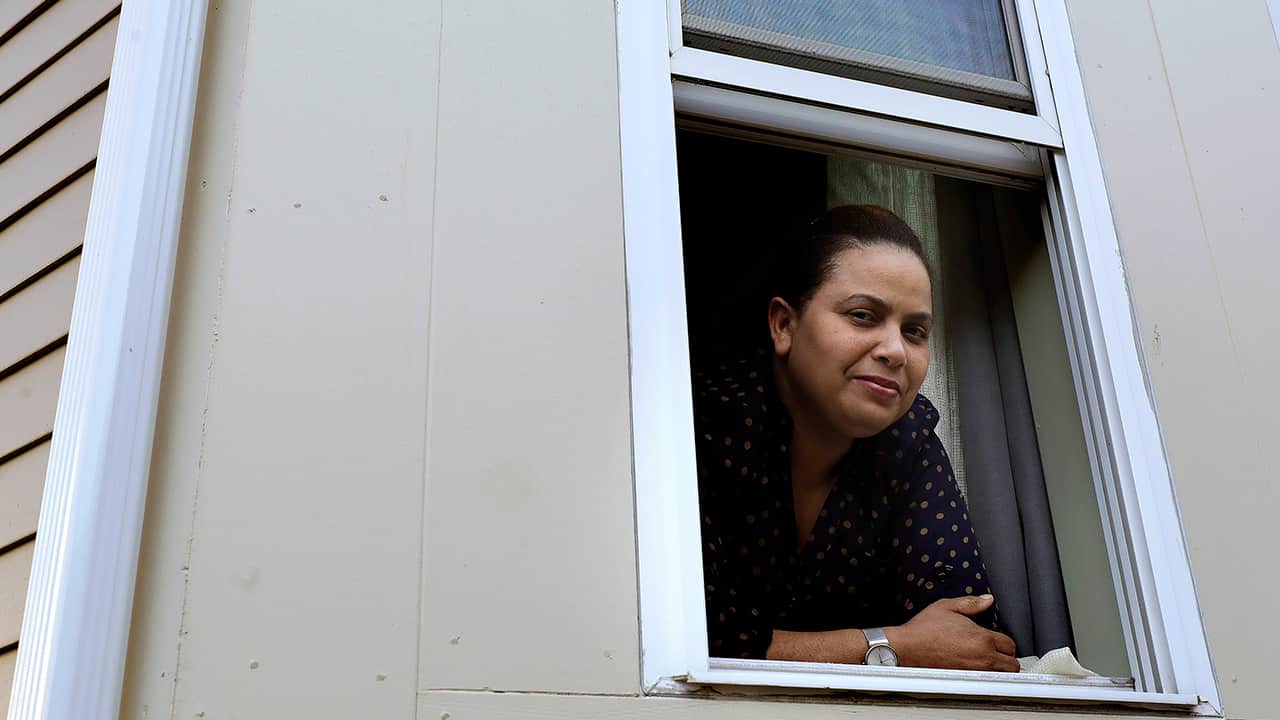 BOSTON — Wendy De Los Santos passed the test to become a U.S. citizen just days before government offices shut down nationwide because of the coronavirus pandemic.

In mid-March, officials said they would tell her in a few weeks when she could publicly recite the oath of allegiance, the final step before becoming an American citizen.

“It is causing some anxiety. It would be nice to finish the process, even if it has to be done virtually. I mean, my daughter is taking classes on Zoom. We’re here. What’s the problem?” — Wendy De Los Santos

“It is causing some anxiety. It would be nice to finish the process, even if it has to be done virtually,” said De Los Santos, a 38-year-old Boston-area medical assistant originally from the Dominican Republic. “I mean, my daughter is taking classes on Zoom. We’re here. What’s the problem?”

While many parts of American life have pivoted online or are beginning to reemerge from weeks of lockdowns, the citizenship process has ground to a halt.

A limited number of small naturalization ceremonies have taken place, but advocates complain that most aspiring citizens haven’t been told when the final step will happen.

Registration deadlines for primaries are approaching in a number of states, and would-be voters must be citizens when they register or risk facing criminal charges or even deportation, they say.

“This is yet another attempt to politicize access to voting,” said Kristen Clarke, president of the Washington, D.C.-based Lawyers’ Committee for Civil Rights Under Law. “The final ceremonial step should not be used as a pretext to deny otherwise citizenship-eligible individuals access to the ballot.”

But he said federal law requires people to take their oath “publicly” and “in person” and that key parts of the ceremony can’t be done virtually, such as collecting permanent resident cards and issuing citizenship certificates. 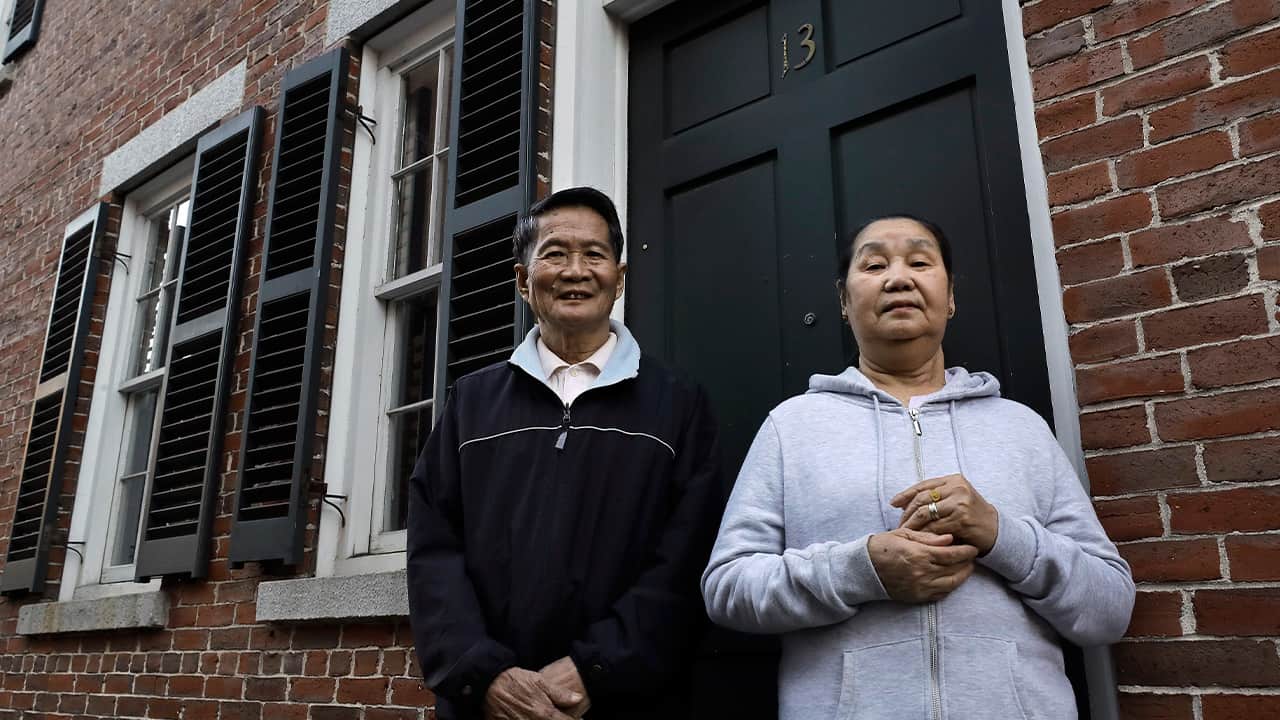 In this Wednesday, May 20, 2020 photo Pay Reh, left, and Poe Meh, right, originally of Burma, also known as Myanmar, stand for a photograph at the entrance to their home, in Lowell, Mass. The elderly couple, who came to Massachusetts as refugees in 2011, were granted a special naturalization oath ceremony in May of 2020 after their lawyer argued that they faced financial hardship if they weren’t naturalized immediately. (AP Photo/Steven Senne)

“Naturalizing new United States citizens is a critical benefit we administer at USCIS and we’re working hard to resume that process,” Edlow said in a statement. “However, we will not ignore federal law, which has clear in-person requirements for naturalization, in the name of convenience or expediency.”

But federal law also requires citizenship ceremonies be conducted “as frequently as necessary” to “minimize unreasonable delays,” said Chiara St. Pierre, an attorney with the International Institute of New England, which is helping De Los Santos and others waiting to take their oath.

President Donald Trump could issue an executive order temporarily easing the in-person requirement or authorizing others to administer the oaths, such as postmasters and notaries public, St. Pierre said.

Trump, however, has used his executive powers to push immigration restrictions during the pandemic, including suspending refugee arrivals, halting some visa processing, largely closing the nation’s borders and turning away asylum-seekers.

“There are a lot of options for getting this done,” St. Pierre said of citizenship ceremonies. “These people have already been approved to become citizens. It’s almost a technicality.”

Complicating matters, USCIS told Congress last week that it needs $1.2 billion in emergency funding and to charge higher fees just to stay afloat. The agency is almost entirely funded by service fees — including the roughly $725 it charges for processing a citizenship application — but that revenue has dried up during the crisis, officials said.

The agency declined to say how many people have participated in ceremonies since the pandemic took hold in the U.S. but said at least 85 have been scheduled through June 4 in a dozen cities, including San Antonio, Salt Lake City, Philadelphia and Anchorage, Alaska.

In Phoenix this week, about 30 people a day took part in small naturalization ceremonies in the USCIS office parking lot. Donning face masks and waving small American flags, the aspiring citizens recited the oath outside their cars.

In York, Pennsylvania, officials last week began administering oaths to about six people at a time on the courthouse steps.

The Agency Approved More Than 200,000 People for Naturalization From April 1 to June 30 of Last Year

USCIS declined to say how many people are waiting, but advocates say it’s easily in the hundreds of thousands.

The agency approved more than 200,000 people for naturalization from April 1 to June 30 of last year. And in Los Angeles alone, some 10,000 people were slated to be naturalized at the city’s convention center on a single March day before the virus scuttled monthly ceremonies through September.

The agency approved more than 200,000 people for naturalization from April 1 to June 30 of last year. And in Los Angeles alone, some 10,000 people were slated to be naturalized at the city’s convention center on a single March day before the virus scuttled monthly ceremonies through September.

The Democratic-led U.S. House has proposed mandating that USCIS conduct naturalization ceremonies remotely as part of its latest, $3 trillion coronavirus relief bill, though leaders in the Republican-controlled Senate have declared the aid package “dead on arrival.”

In the meantime, some advocates are trying to secure emergency oath ceremonies for the neediest families.

“It’s triage, really,” said Jacob Benhabib, an attorney for the Boston-based Project Citizenship. “We don’t know how long it will take for USCIS to get through the backlog or in what order they’ll take people, if left to their own devices.”

Poe Meh and Pay Reh, an elderly couple in Lowell, Massachusetts who arrived as refugees from Myanmar in 2011, were among those granted a special oath ceremony last week with Benhabib’s help.

He argued that the couple faced financial disaster if they weren’t naturalized immediately. The couple’s Supplemental Security Income benefits, which provide a few hundred dollars each month for rent and other living costs, expired late last year, and they couldn’t reapply until they became citizens, Benhabib said.

They recited the oath last Friday outside the USCIS office in Lawrence, with only an agency representative and security guard present, according to son-in-law Mee Reh, who helped with translation.

A day later, with naturalization papers in hand, the couple filed for SSI benefits, their son-in-law said. They’re waiting to hear back.

“This is a big happiness,” Mee Reh said. “We were worried there would be more difficult times ahead.”