The outbreak of the coronavirus has dealt a shock to the global economy with unprecedented speed. Following are developments Wednesday related to the national and global response, the work place and the spread of the virus.

TRAVEL & LEISURE: Viral videos out of places like Lake of the Ozarks over the holiday weekend showed how willing people are to gather, even in a pandemic. Tourist destinations, from countries to theme parks, are laying out plans for operations during, and potentially after, the pandemic fades.

— Nevada’s casinos will reopen next week, including those on the Las Vegas Strip. The casino’s, which power Nevada’s economy, were ordered closed more than 11 weeks ago. They will be allowed to open June 4, right before the weekend.

— Disney World and SeaWorld will reveal their plans for a phased reopening in Florida. If there is such a thing as an amusement park mecca for both companies, it’s Florida. Disney runs four parks at its Walt Disney World Resort in Orlando. The parks attract more than 150 million people annually. Executives will address the Orange County Economic Recovery Task Force before noon Wednesday. Any plan will have to be approved by Gov. Ron DeSantis. Universal and Six Flags outlined new park guidelines earlier this month.

— Cyprus has pledged to cover all costs for anyone testing positive for the coronavirus while on holiday in the east Mediterranean island nation. That includes lodging, food, drink and medication for COVID-19 patients and their families.

A 100-bed hospital will cater exclusively to foreign travelers who test positive. A 500-room “quarantine-hotel” will exclusively host patients’ family members and other close contacts.

— Ford temporarily halted production on the transit side of its Kansas City assembly plant so it can perform a deep cleaning after a worker tested positive for COVID-19. In addition to disinfecting the employees’ work area and the paths taken while at the plant, Ford is notifying people known to have been in close contact with the person and asking them to self-quarantine for 14 days.

— Google is giving a $1,000 allowance to each worker to expense necessary equipment and office furniture. The company will also start reopening more offices in more cities beginning July 6.

CEO Sundar Pichai said employees will return on a rotating basis, at about 10% building occupancy. The company hopes to ramp up that rotation in September, eventually reaching 30% occupancy. Those who can work remotely will be allowed to due so through 2020. 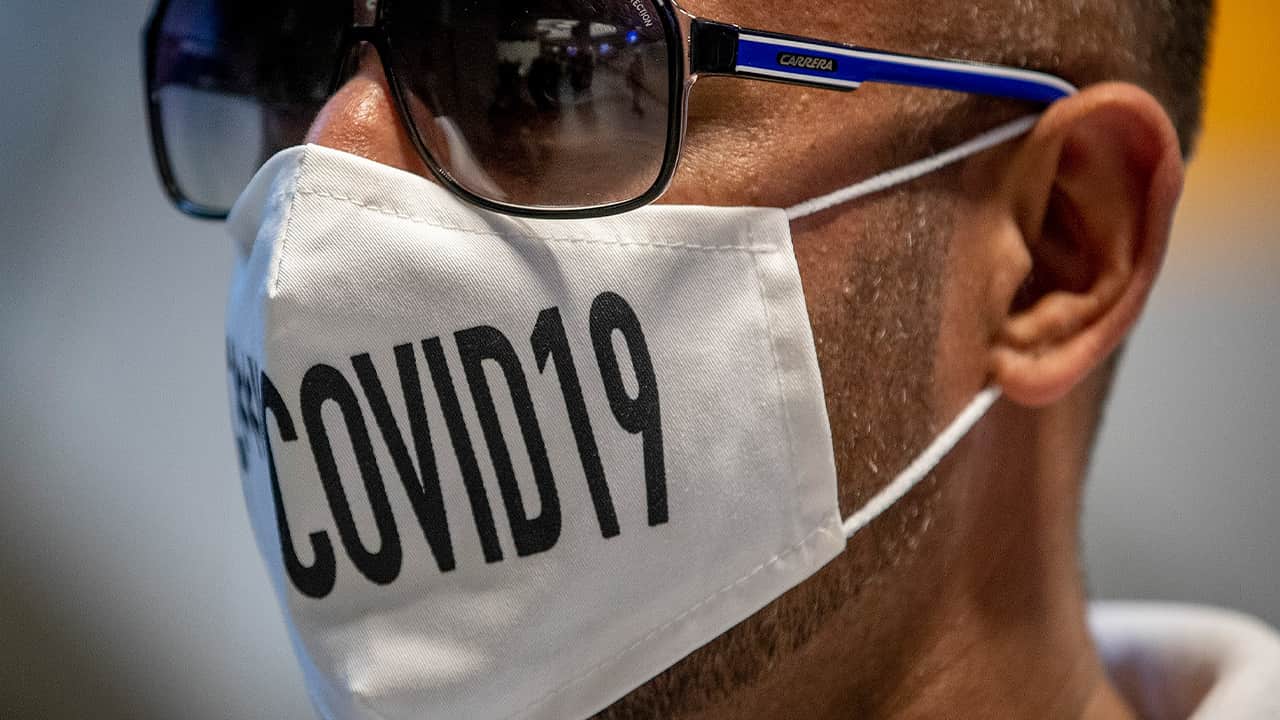 A man with a face mask reading “COVID 19” waits at the airport in Frankfurt, Germany, Wednesday, May 27, 2020. (AP Photo/Michael Probst)

GOVERNMENTS & CENTRAL BANKS: Countries continue to roll out new funding measures to support hospitals, businesses and citizens. The push to reopen national economies continues even though the dangers of doing so is becoming clear.

— Japan approved its largest-ever draft extra budget of 32 trillion-yen ($297 billion) to fund stimulus projects aimed at softening the economic damage from the pandemic. The second round of funding announced this month will partially finance projects worth about 117 trillion yen ($1.1 trillion), including support for small businesses, funding to strengthen medical systems and for medical workers, as well as subsidies for local governments to step up regional coronavirus measures.

— Poland is lifting most of its lockdown restrictions starting Saturday. Prime Minister Mateusz Morawiecki said Wednesday the number of people allowed in shops, restaurants and hair salons is being loosened. starting June 6 cinemas, theaters and concert halls will be allowed to open, but only at 50% capacity, and masks will be mandatory.

ROUND NUMBERS: Americans are devouring pizza in lockdown. In the eight weeks starting March 23, Domino’s comparable-store sales jumped 16%. That trend accelerated the longer people were shut in. In the final three weeks of that period, sales spiked 22%, the company said Wednesday. It was the same story at Papa John’s, where same-store sales rocketed 27% between March 30 and April 26, and 33.5% through the end of May.