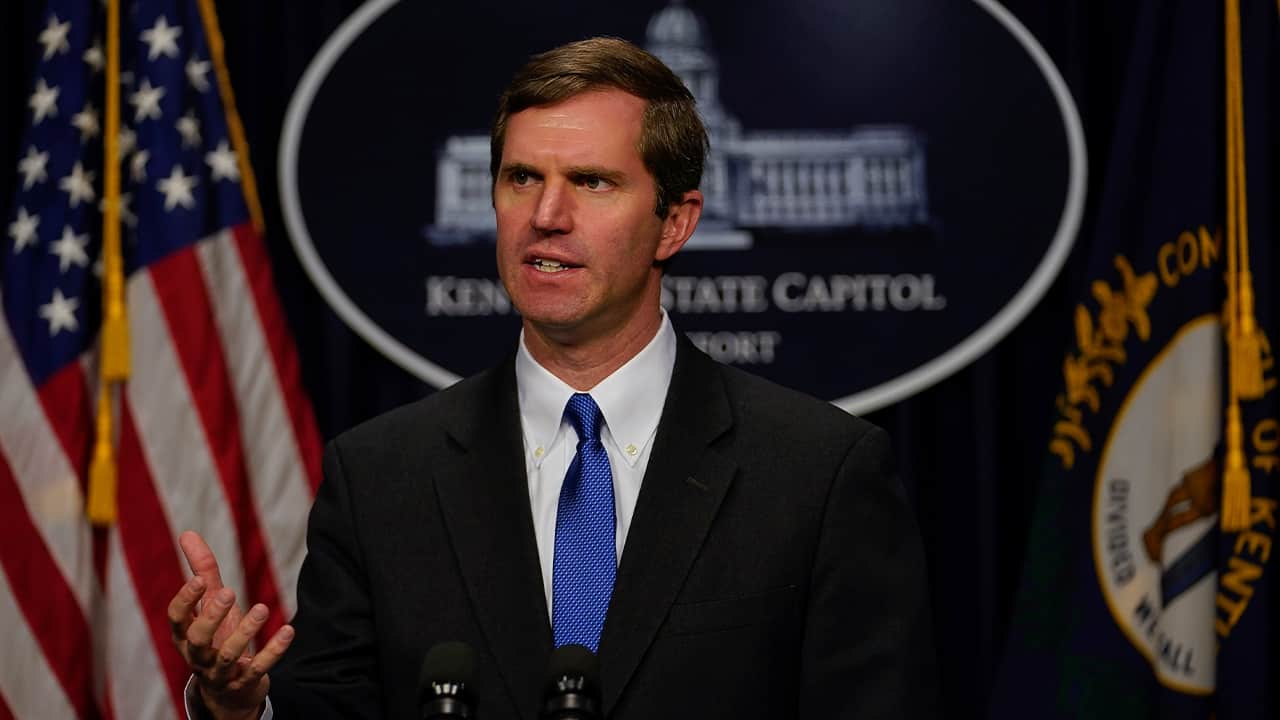 FRANKFORT, Ky. — Vowing not to back down after armed protesters gathered near his home and hung him in effigy, the governor of Kentucky on Tuesday condemned their use of “fear and terror” in a demonstration fueled by coronavirus restrictions.

Gov. Andy Beshear referred to the protesters as a mob in sharply condemning the weekend rally that spread to the Governor’s Mansion, where his children play. And the Democratic governor bluntly accused some Kentucky politicians of culpability for attending a previous rally.

“Let’s start by calling it what it was and what it is — actions aimed at creating fear and terror,” Beshear said of Sunday’s rally. “Crossing over barriers, standing on the other side of the glass from where I raise my kids and hanging me in an effigy, that’s an action intended to use fear to get their way.”

Beshear said he would not be deterred by the demonstration. He has stressed the need to reopen the state safely, phasing in business restarts amid the health crisis. Non-essential retail stores and restaurant dining rooms have been among the reopenings, though with restrictions meant to adhere to social distancing. Beshear also has strongly urged the wearing of masks.

The effigy was hung in a tree near the State Capitol during what was billed as a protest rally in defense of constitutional rights, including the right to bear arms. The rally turned into a protest against coronavirus restrictions and Beshear’s administration, according to media reports, with protesters chanting outside the Governor’s Mansion for him to come outside.

Beshear said Tuesday that the protesters have been “embraced and emboldened” by some elected leaders. A handful of Republican lawmakers had attended a previous rally.

Without naming anyone, the governor urged elected officials to no longer “cater” to such groups, saying: “You cannot fan the flames and then condemn the fire.”

“You can’t wait until something nasty and horrible happens to then claim it’s wrong while you’ve catered the support of certain groups for votes or other reasons,” he added.

Beshear said he doesn’t regret moving his wife and their two children to the Governor’s Mansion, located across the street from the statehouse grounds, but said security measures will be reviewed.

He wondered aloud how the protesters would react “if someone else who is armed walked up on their patio?””

“They walked up and stood on the front porch, and there, just a window pane away from where my kids play, the mob chanted and heckled,” Beshear said. “Thankfully, my kids weren’t there that day. But I want to remind you they are 9 and 10 years old.”

Kentucky State Police had little to say Tuesday about the protest.

“The Kentucky State Police does not comment on the level of security provided to protect the governor, nor any inquiries that we receive regarding these efforts,” said Sgt. Josh Lawson, commander of the agency’s public affairs branch, speaking with the Lexington Herald-Leader.

Beshear, the son of a former Kentucky governor, is known for his disciplined, even-keeled style. But he let his emotions show when pressed by reporters about the incident.

“I’m not going to let a bunch of jerks change the way that we’re living our life,” he said.

Beshear made another statement about the protest during his briefing. Each day, he takes time to learn a few more words of sign language from a sign language interpreter. On Tuesday, the lesson he signed was: Love, not hate.

Related Topics:coronavirusGov. Andy Beshear
Up Next

SpaceX on Cusp of Launching Astronauts, Back on Home Turf