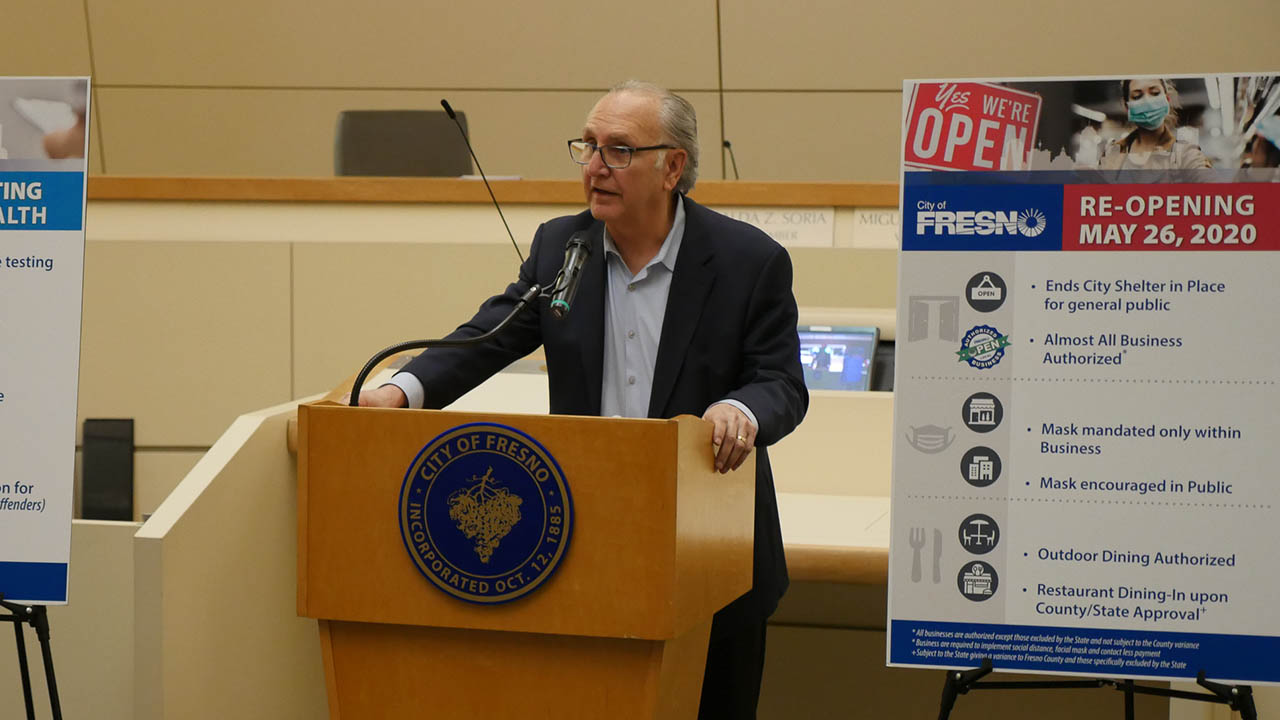 As soon as the Memorial Day weekend ends, Fresno residents will be free of the city’s shelter-in-place order.

Mayor Lee Brand announced the rollback — effective 12:01 a.m. on Tuesday, May 26 — at a noontime news conference Thursday at City Hall.

However, dine-in restaurants will be allowed to open immediately after completing a form on the Fresno County Health Department website, city officials said Thursday evening. 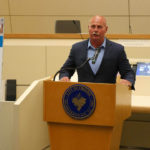 “Now, it’s time for Fresno to get back to work.” — Mayor-elect Jerry Dyer

“We are offering hope. And hope is a powerful word that guides us through the darkest nights to the light of day,” Brand said.

The end of the shelter order, in place since March 19, will allow all retail businesses to open to the public. Restrictions, such as one person per 500 square feet for some businesses, will be lifted.

Other limitations remain, such as physical distancing practices of 6 feet and wearing masks while shopping or in a government building.

“Now, it’s time for Fresno to get back to work,” Fresno Mayor-elect Jerry Dyer said. 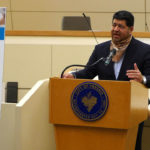 “If you don’t want to take these precautions for yourself, please take them for your grandparents, for your uncle that has a heart condition, your aunt that has diabetes, or your daughter that has asthma. This is about protecting the vulnerable.” — councilman Luis Chavez

The order replaces the previous 16 emergency orders Brand’s administration put in place since the initial proclamation of an emergency on March 16.

“We’ve had one of the toughest eight weeks in our city’s history. This pandemic has bent our faith, disrupted our way of life or livelihood, but it has sure as hell not broken our will,” Chavez said.

The plan also includes $5 million each for COVID-19 testing and contact tracing. Chavez hopes that will result in Fresno County meeting the state guideline of 1,500 tests per day.

Restaurants OK, Others Businesses Need to Wait for Stage 3

With the state approving Fresno County’s variance request Thursday, restaurants will be allowed to reopen with dine-in customers. Brand and Dyer said there wouldn’t be a customer cap set for restaurants, but they would have to allow for physical distancing.

Higher risk business sectors — such as gyms, hair/nail salons, and live sports/entertainment venues — will remain closed until the county gets the green light to proceed to Stage 3 of the state’s roadmap for reopening the economy.

In-person religious services are still not allowed under the state order. Dyer said “much of this is still up in the air,” but councilman Mike Karbassi wants to allow churches to conduct indoor services.

Council President Miguel Arias addressed critics of the way the council and Brand have handled the pandemic crisis. 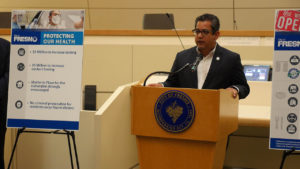 He also talked indirectly about a group of protesters at Arias’ residence on May 12. Arias is seen in a video shoving three men as they lingered on his condominium stairwell. Arias had asked them to leave.

The protesters enacted a citizens arrest for battery for the incident last week. Fresno police and the district attorney’s office continue to investigate the case, with a tentative Sept. 9 court date.

“This measured and responsible reopening ensures that nobody is put at unnecessary risk doing this pandemic,” Arias said. “As the largest and most densely populated city that makes up the majority of the county of Fresno, we don’t have the luxury to be reactive, to be extreme. We actually embrace the responsibility of being measured and to protect the public health of everyone that lives in our city.” 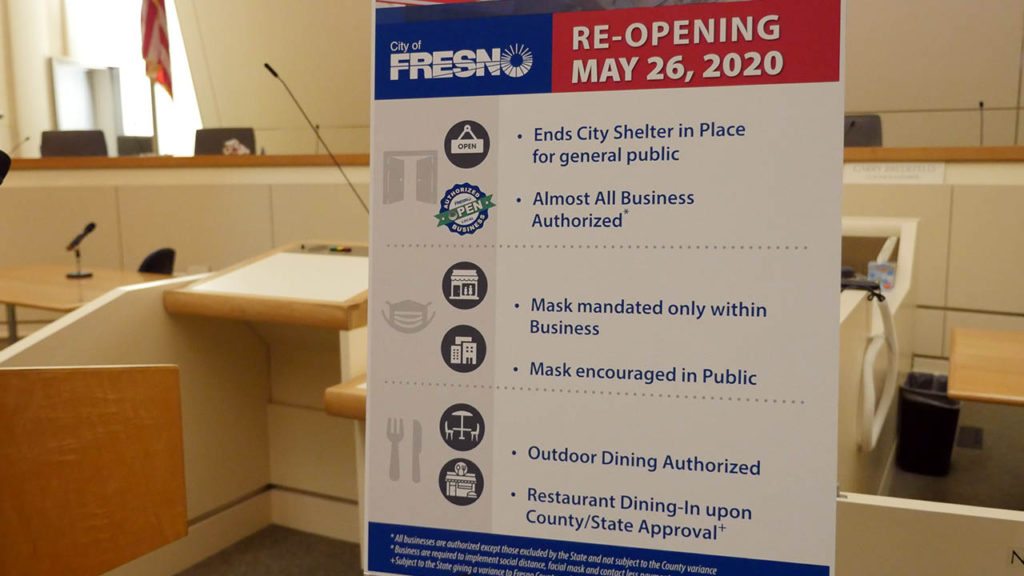 A look at the top items in the city of Fresno’s reopening plan effective Tuesday, May 26. (GV Wire/David Taub)

Councilman Garry Bredefeld offered an alternative proposal at Thursday’s city council meeting. In a procedural move, Arias removed it from the agenda without a hearing. Bredefeld made a motion for his proposal to return to the agenda, but it did not receive a second.

“We still have a small and extreme voice of opposition, but we’re not going to heed those loud screams no matter how loud, how personal, and how threatening they become. Our responsibility is to ensure the public safety of everyone, not just to react to the extreme views of a few,” Arias said.

“Lifting lockdown finally. However, still mandating masks inside every business. No science or data to support this. Will continue to hurt businesses. People shopping in Clovis instead,” Bredefeld said.

There have been 20 deaths countywide, although at least nine of those cases had underlying conditions.

“Those aren’t just numbers. That’s somebody’s father, grandfather, mother, sister, brother. Those are losses that we mourn for every day — people that won’t get an opportunity to celebrate Christmas, Thanksgiving, or another birthday,” Chavez said.

Chavez said Fresnans can’t become complacent. Following physical distancing protocols means the difference between prolonging measures or getting back to normal,” he said.

“If you don’t want to take these precautions for yourself, please take them for your grandparents, for your uncle that has a heart condition, your aunt that has diabetes, or your daughter that has asthma. This is about protecting the vulnerable,” Chavez said.

Brand Planning For Budget Ahead

“We will get through it. We’re not as bad as the other cities.” — Mayor Lee Brand on the upcoming budget

The pandemic will cause an estimated $32 million budget hole for the next fiscal year. Brand is preparing his plan for city spending.

“We know there’s going to be as a major challenge,” Brand said.

He added that Fresno is in better shape than other big cities like Los Angeles and Anaheim.

“There’s still a chance of getting some of the CARES (Act) money applied to revenue shortfalls, but we can’t rely on that. It’s possible there will be another act of Congress. We can’t rely on that. So we’re got to go forward next week based on what we know, what we have right now. We will get through it. We’re not as bad as the other cities,” Brand said.