Seniors, Others at Risk Encouraged to Stay Home Under New Plan To Open Fresno Economy 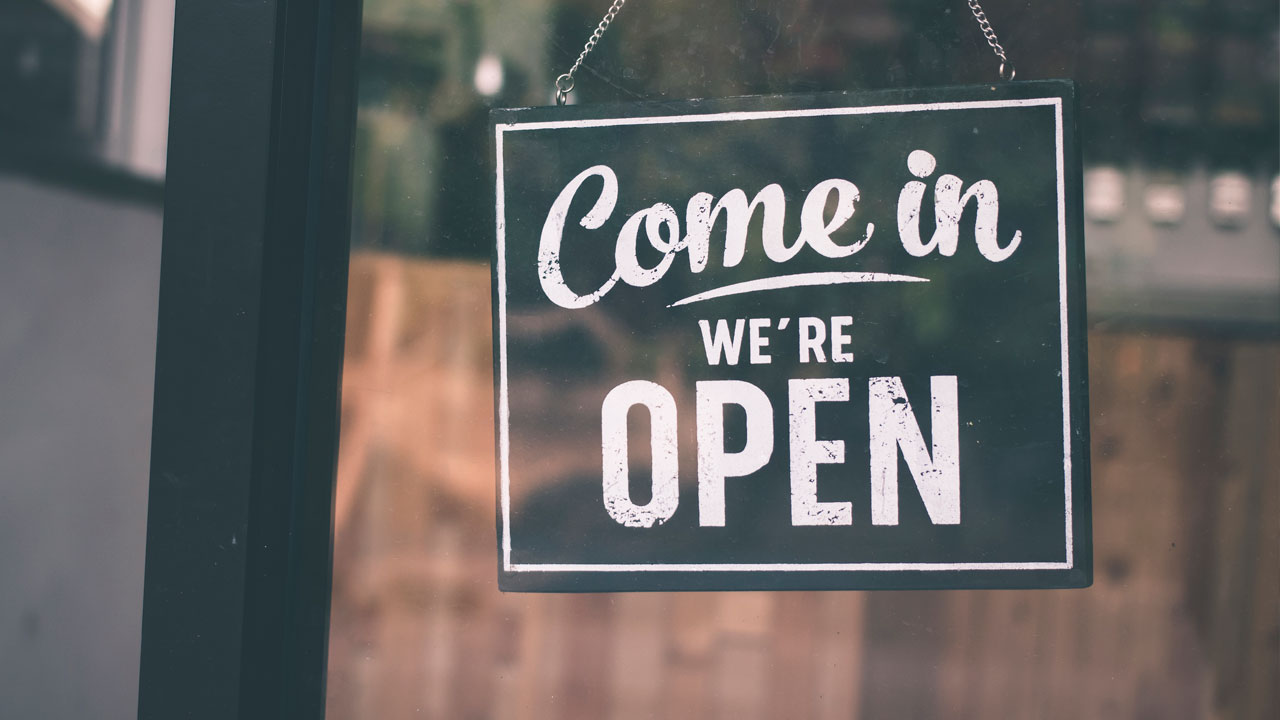 There could be two plans to fully reopen Fresno presented at this week’s city council meeting.

As he promised a week ago, Councilman Garry Bredefeld is proposing a resolution to immediately repeal all 16 emergency orders made during the COVID-19 pandemic.

On Monday, Councilman Luis Chavez released a similar plan to accelerate a return to business as usual in Fresno.

His five-point proposal says “the city is ready for dine-in restaurants,” pending state and county approval. In addition, Chavez wants to modify the city’s shelter-in-place order to “highly encourage” seniors and vulnerable populations to stay home, with others following CDC precautions; remove the $1,000 fine and jail penalty for all but the most egregious violators; provide the county $10 million in financial assistance for testing and contact tracing; and limit mandatory mask-wearing to “closed quarters, stores and common public space areas.” Other outside activities would not require a mask. 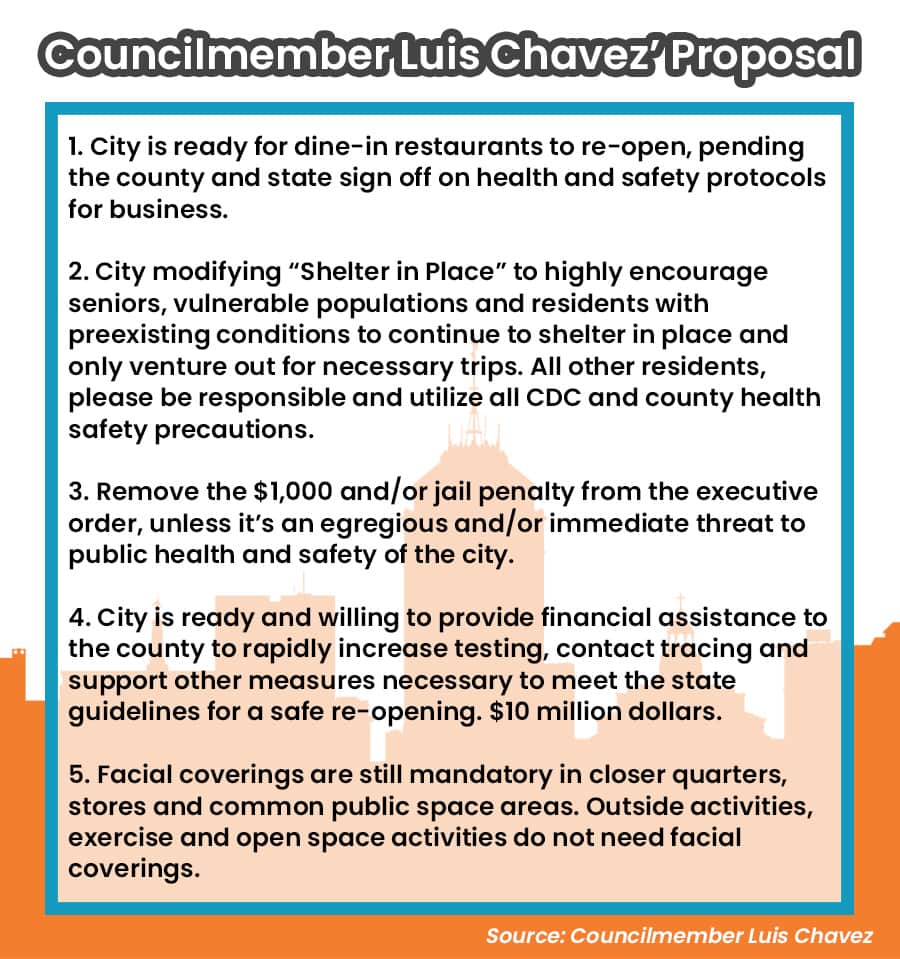 “This is a step in the right direction towards safely reopening small businesses that have been closed for close to eight weeks,” Chavez said.

“I said three weeks ago we would eventually have this conversation about what reopening would look like like. That day has arrived. We should cautiously open businesses, as soon as the county and state sign off,” he said.

Chavez’s plan is not yet on the council’s published agenda, meaning a special meeting would have to be called to consider it — a common occurrence in the COVID-19 era.

“The city is ready and able to work with the county and help them achieve the measurements outlined by the governor. We’ve committed $10 million to help with testing and contact tracing,” Chavez said. “Our hope is the county can secure the variance from the state and move forward.”

Bredefeld’s Re-Open Plan: Will Anyone Second That Motion?

Will Bredefeld even receive a second on his motion from any council colleague, allowing is own resolution to be discussed?

Bredefeld took umbrage to a prediction by GV Wire’s Bill McEwen that such support was unlikely to materialize. McEwen made his comments on KSEE’s “Sunday Morning Matters” program.

“There will be no second. Garry Bredefeld right now is totally irrelevant to any conversation about COVID-19,” McEwen said. “He has done nothing to contribute to positive improvements for business owners.”

On Twitter, Bredefeld shot back, “Where’s McEwen’s editorial or @FresnoBee’s calling for the Council to take a vote? They’re all complicit with the Council hiding from taking a vote and support all these authoritarian orders. Everyone should be on record just as the Board of Sups and other Councils have done.”

Where’s McEwen’s editorial or @FresnoBee’s calling for the Council to take a vote? They’re all complicit with the Council hiding from taking a vote and support all these authoritarian orders. Everyone should be on record just as the Board of Sups and other Councils have done.

Last Thursday, no council member seconded Bredefeld’s motions to take separate votes on a financial aid package for small businesses and renters. Bredefeld’s colleagues were also silent when he asked for a guarantee that rental aid would go only to American citizens.

But Councilman Mike Karbassi said he would consider adding a second to Bredefeld’s motion this week.

“But it will need to be drastically modified, because a simple repeal of all the emergency orders would do damage,” Karbassi said. “I am very concerned about the impacts to local small businesses especially the ones which are low-risk. But I am carefully evaluating all options before deciding how to move forward. This is still a public health crisis and COVID-19 is now the nation’s third greatest killer of Americans.”

The city needs its own facility. A makeshift one-year contract with the Central California SPCA runs out on June 30.

The city and Northstar General have already begun the design process for the proposed 34,500 square foot facility under a separate contract. The shelter is being built on property near the airport, acquired from The Gap. It is expected to open in July of next year.

There is no word on how animal control services will be provided between the expiration of the current CCSPCA contract and when the city’s own facility is ready.

Other Council Items of Interest

A consolidated list of items on Thursday’s council meeting Politics 101 is keeping its eyes on:

— An extension of the consultant agreement between the city and Quad Knopf, Inc. for its work on Fresno’s marijuana business plan through Dec. 31. A staff report says this will happen with “no additional budget increase.” QK prepared a 1,300 page environmental impact report, which is currently under public review.

— A $4 million/five-year contract for the police dept. to purchase 556 Tasers and 556 body-worn cameras — with unlimited video storage — from Axon Enterprise.

— Approve a five-year extension with ASM Global (the corporate successor to SMG) to operate the Fresno Convention Center, with the city paying ASM $145,000 for the first year, with annual 2.5% raises. The city will also chip in $150,000 each year for marketing and promotions.

— Approve a change to city code to allow emergency sleeping cabins of 100 square feet, with up to four people per cabin. The item was on the May 14 agenda, before being tabled. Many housing advocates commented on the plan last week, voicing concerns about health and safety.

As Clovis Councilman Bob Whalen said at last week’s meeting, its an open secret that some city residents are raising laying hens at their homes — even though its against city code.

Whalen said he is amenable to changing city law to allow backyard chickens.

“This particular crisis has opened up people’s eyes to the idea that eggs are hard to come by,” Whalen said.

He asked for council to consider the change at a future meeting.