LOS ANGELES — Mike Garcia grew up a single-minded kid from Southern California: He just wanted to fly fighter jets. His decision to enter national politics wouldn’t come until decades later, after he had seen one California election too many.

A career as a Navy aviator would lead to a decade in the defense industry. But it was the 2018 elections that prompted the Republican to enter public life, as his home state moved deeper into Democratic-dominated government that he faults for job-crushing regulation and climbing taxes.

“I don’t want my country to turn into what my state has become,” says Garcia, who claimed a vacant U.S. House seat Tuesday north of Los Angeles.

The political newcomer’s win over Democrat Christy Smith marked the first time in over two decades that a Republican captured a Democratic-held congressional district in California.

What was supposed to be a tossup election ended up with Garcia holding a comfortable 12-point edge in an incomplete tally Wednesday.

Garcia appeared to benefit from enthusiasm among conservatives who saw a rare opportunity to seize a Democratic-held seat in California, while the electorate that turned out in the unusual May special election skewed toward reliable, older Republican voters, even though the district has a Democratic registration edge.

His Hispanic surname was likely a benefit in a district with a significant Latino population. His military service would play well in a district known as popular with veterans and Los Angeles police officers.

The son of a Mexican immigrant father, Garcia will go to Congress as a fresh face who campaigned as a supporter of President Donald Trump and railed against “socialist-style” policies coming from the Sacramento statehouse.

Smith delivered her congratulations but said she expected their roles to be reversed in November, when the two meet in a rematch for the full, two-year House term that begins in January. 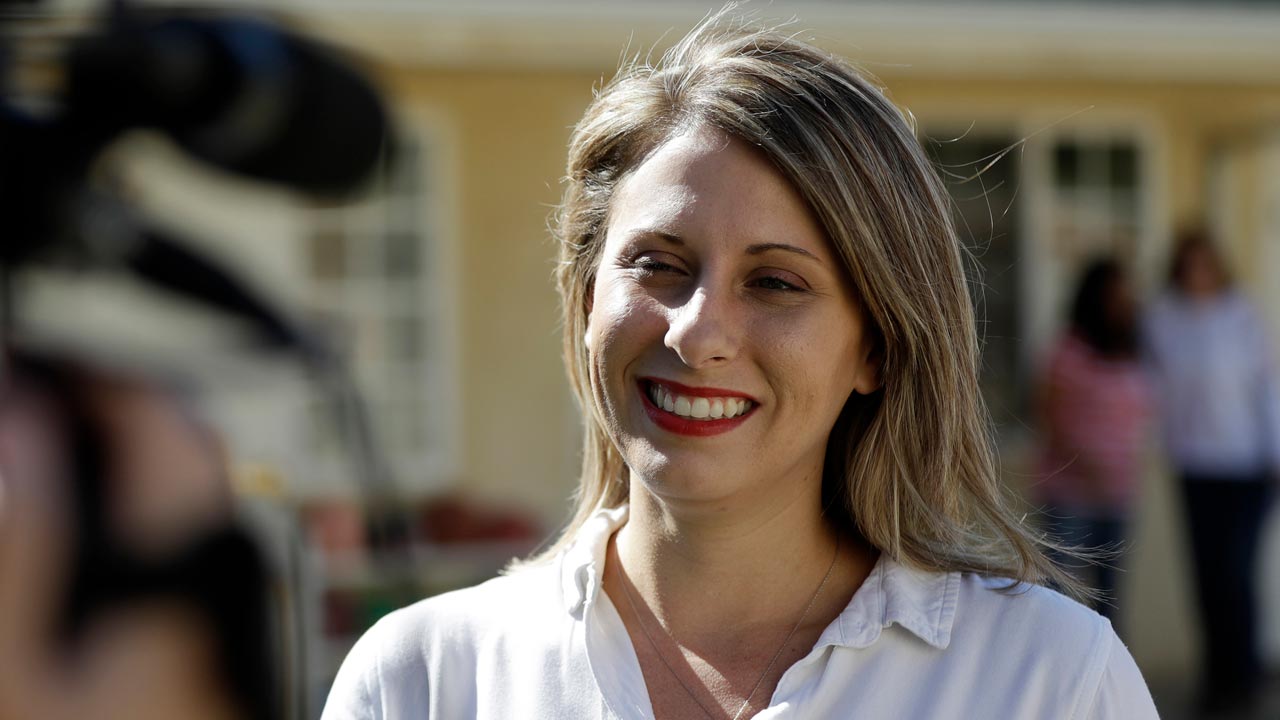 Democratic Congresswoman Katie Hill (D-Santa Clarita) FILE – In this Nov. 6, 2018, file photo, Katie Hill speaks during an interview after voting in Agua Dulce, Calif. Hill announced her resignation over the weekend following the publication of explicit photos that outed the relationship. She describes the photos as “revenge porn” and is vowing to fight the problem so that women and girls don’t shy away from politics in the future. Hill’s resignation in a sex scandal she blamed on an abusive husband has observers wondering if women are held to higher standards in public life and what the future holds for politicians coming of age in the iPhone era. (AP Photo/Marcio Jose Sanchez, File)

“This is only one step in the process,” she said in a statement.

The race in the 25th District was being watched nationally as a proxy vote on Trump’s leadership during the coronavirus crisis, as well as for hints about the political climate heading toward the November elections.

Coupled with another GOP special election victory Tuesday in a heavily Republican Wisconsin district, Garcia’s win would leave Democrats with a 233-198 House majority, plus an independent and three vacancies.

Republicans said Garcia’s victory showed the GOP can win in suburban districts, where moderate voters deserted the party in droves in 2018. Republicans lost 40 seats that year, enough for Democrats to take hold of the chamber. Seven of those seats were in California, including the 25th District.

But Democrats said there would be a different result when Garcia and Smith face off again in November, when far more Democratic voters will be drawn to the polls with Trump’s name on the ballot.

Garcia, a 44-year-old father of two boys whose wife is an interior designer, grew up in the same area he will represent, a district that cuts through suburbs and small ranches in northern Los Angeles and eastern Ventura counties.

“I didn’t grow up wanting to be a politician,” he told supporters at a Simi Valley tavern in January, before statewide stay-at-home orders took effect. “I literally just saw the last elections and I said, ’Hey, if I’m not going to do it, who is going to do it?’”

A top graduate at the United States Naval Academy, he went on to fly over 30 combat missions in Operation Iraqi Freedom. After 20 years in the military, he would spend a decade at defense contractor Raytheon.

Garcia and Smith each raised over $2 million, a rare instance in a year when Democrats in key races have usually far outgunned Republicans in contributions. Outside Democratic and GOP political organizations also poured more than $2 million apiece into the contest.

The seat became vacant last year after then Rep. Katie Hill acknowledged an affair with a campaign worker and the House opened an ethics probe into an allegation that she was involved with a member of her congressional staff, which Hill denied.

Smith and Garcia topped a crowded field of candidates in the March 3 primary.

Not long ago the district was reliable conservative terrain. but like much of California it has grown gradually more Democratic. Hillary Clinton carried the district by nearly 7 points in the 2016 presidential election, and two years later Hill claimed what was the last Republican-held House seat anchored in Los Angeles County with a 9-point win.

The election took place under unusual circumstances, which might make it difficult to draw broad lessons from the contest. Most residents are under stay-at-home orders, traditional campaigning was halted in March and mail-in ballots were sent to every voter.