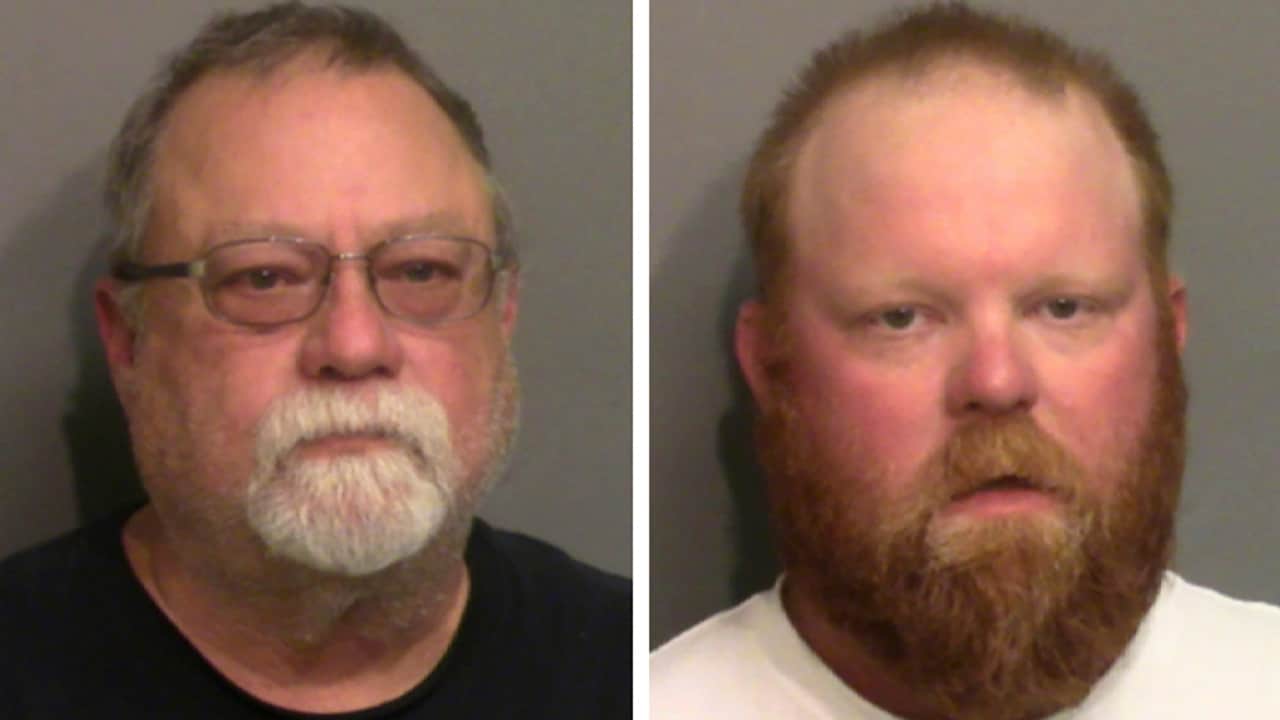 SAVANNAH, Ga. — Outrage is spreading over a shooting of a black man that led to murder charges more than two months later against a white father and son, but “all that matters is what the facts tell us,” Georgia Bureau of Investigation Director Vic Reynolds said Friday.

And once the GBI was brought into the case, “we came up fairly quickly with the solid belief that there’s sufficient cause to charge them with felony murder and aggravated assault,” Reynolds said at a news conference.

The investigation continues now that Gregory and Travis McMichael have been booked into the Glynn County Jail in the Feb. 23 shooting of Ahmaud Arbery, and Reynolds said “every stone will be uncovered.”

The investigation continues now that Gregory and Travis McMichael have been booked into the Glynn County Jail in the Feb. 23 shooting of Ahmaud Arbery, and Reynolds said “every stone will be uncovered.”

But in response to a question about racial intent in the shooting, Reynolds said “there is no hate crime in Georgia. There isn’t. It is one of four or five states that doesn’t have one.”

The McMichaels told police they pursued Arbery, with another person recording them on video, after spotting him running in their neighborhood. The father and son said they thought he matched the appearance of a burglary suspect recorded on a surveillance camera.

Arbery’s mother, Wanda Cooper Jones, has said she thinks her son, a former football player, was just jogging in the Satilla Shores neighborhood before he was killed on a Sunday afternoon.

National outrage over the case swelled this week after the cellphone video was leaked and shared on social media.

Those close to Arbery celebrated the news but also expressed frustration at the long wait.

“This should have occurred the day it happened,” said Akeem Baker, one of Arbery’s close friends in Brunswick. “There’s no way without the video this would have occurred. I’m just glad the light’s shining very bright on this situation.” 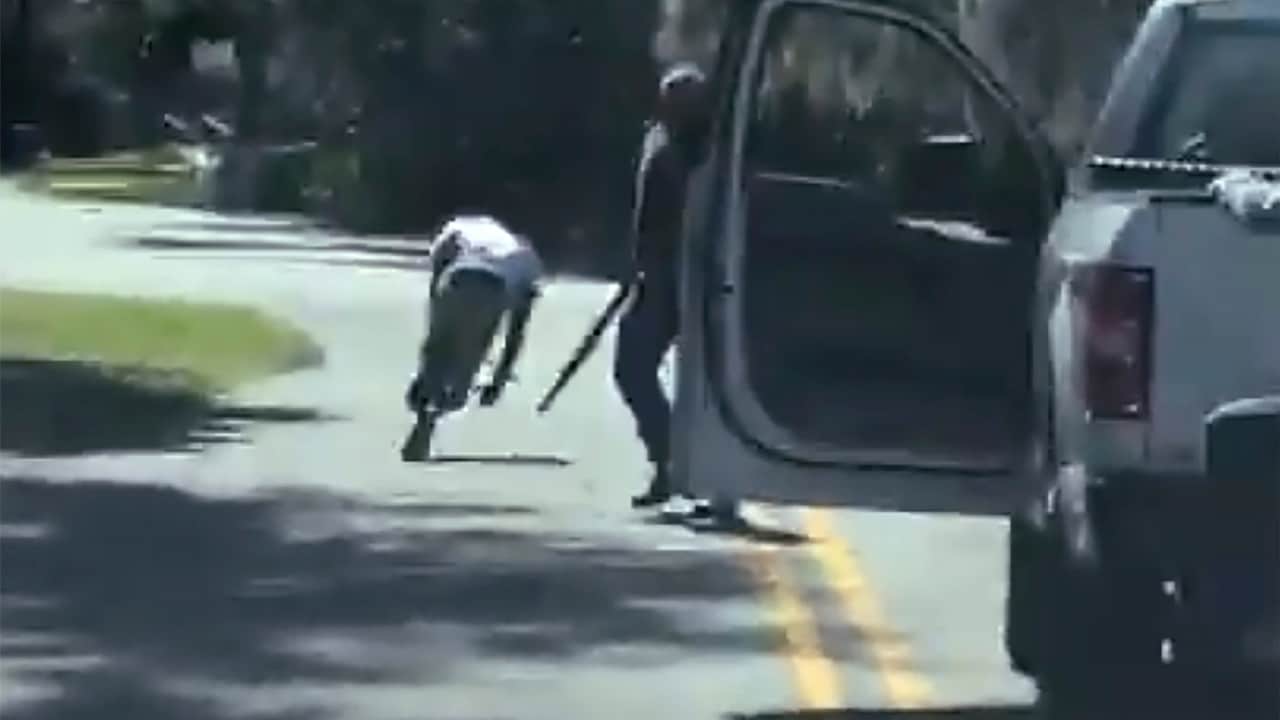 This image from video posted on Twitter Tuesday, May 5, 2020, purports to show Ahmaud Arbery stumbling and falling to the ground after being shot as Travis McMichael stands by holding a shotgun in a neighborhood outside Brunswick, Ga., on Feb. 23, 2020. The AP has not been able to verify the source of the video. (Twitter via AP)

“This is the first step to justice,” Crump said in a statement. “This murderous father and son duo took the law into their own hands. It’s a travesty of justice that they enjoyed their freedom for 74 days after taking the life of a young black man who was simply jogging.”

The GBI announced the arrests the day after it began its own investigation at the request of an outside prosecutor. The felony murder charges against Gregory McMichael, 64, and Travis McMichael, 34, mean that a victim was killed during the commission of an underlying felony, in this case aggravated assault. The charge doesn’t require intent to kill.

Reynolds said he didn’t know whether the McMichaels had an attorney who could comment.

Gregory McMichael retired last year as an investigator for Glynn County District Attorney Jackie Johnson; the connection caused Johnson to recuse herself. Waycross D.A. George E. Barnhill then got the case before recusing himself under pressure from Arbery’s family because his son works in Johnson’s office.

The outside prosecutor now overseeing the case, Tom Durden, said Monday that he wanted a grand jury to decide whether charges are warranted, but Georgia courts are still largely closed because of the coronavirus. Durden said Friday that he won’t bow to public pressure from one side or another.

Brunswick defense attorney Alan Tucker identified himself Thursday as the person who shared the video with the radio station. He did not say how he obtained it. In a statement, Tucker said he wasn’t representing anyone involved. He said he shared the video “because my community was being ripped apart by erroneous accusations and assumptions.”

The Outcry Over the Killing Reached the White House

The video shows a black man running at a jogging pace. The truck is stopped in the road ahead of him, with one of the white men standing in the pickup’s bed and the other beside the open driver’s side door.

The runner attempts to pass the pickup on the passenger side, moving just beyond the truck, briefly outside the camera’s view. A gunshot sounds, and the video shows the runner grappling with a man over what appears to be a shotgun or rifle. A second shot can be heard, and the runner can be seen punching the man. A third shot is fired at point-blank range. The runner staggers a few feet and falls face down.

The outcry over the killing reached the White House, where President Donald Trump offered condolences to Arbery’s family.

“It’s a heartbreak. … very rough, rough stuff,” Trump added. “Justice getting done is what solves that problem. It’s in the hands of the governor and I’m sure he’ll do the right thing.”

Republican Gov. Brian Kemp told reporters before the charges were announced that he’s confident state investigators will “find the truth.”