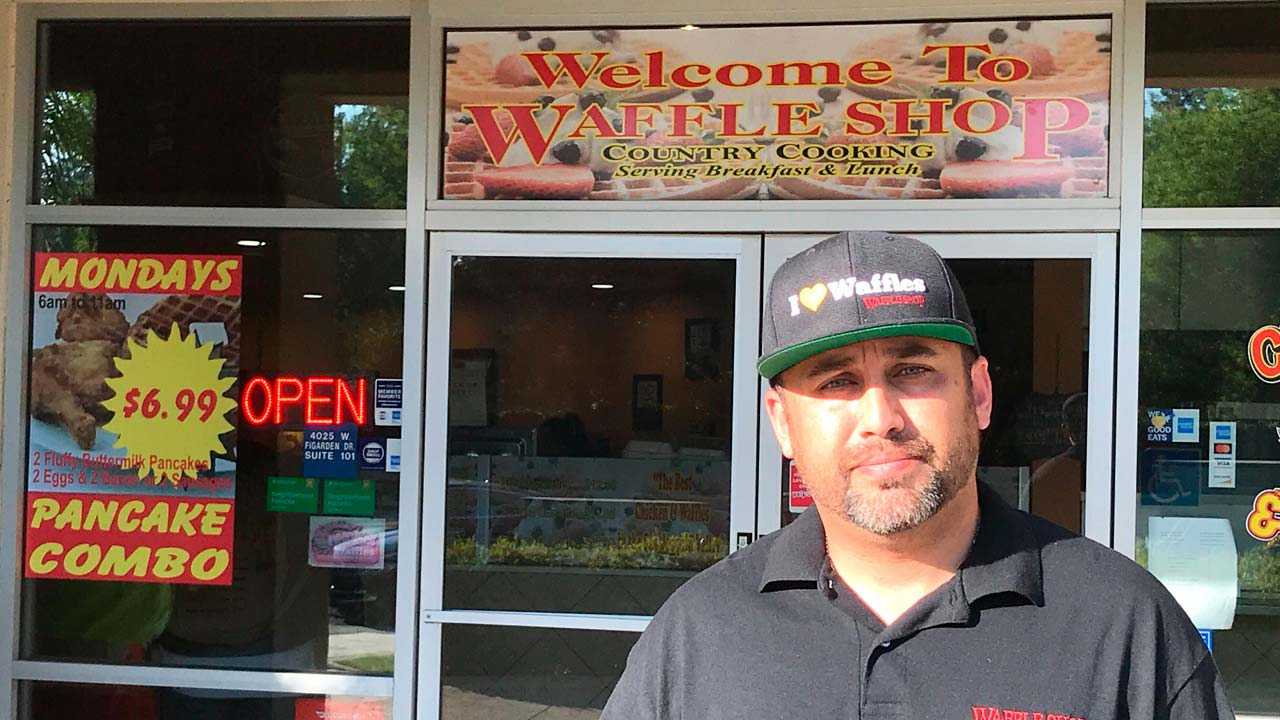 Bacon sizzled. Eggs were cracked. Customers filled up the parking lot and tables of a northwest Fresno restaurant Friday morning.

The ‘Waffle Shop‘ is back open for breakfast.

The customers’ cacophony was a throwback to before the pandemic began sweeping across the globe. But there were still reminders of the phantom menace. Staff and cooks all had on face masks. Customers were spaced out with empty tables turned into social distancing barriers.

“Everybody’s on the page where they want to go back to work. Just let us unlock our doors and support ourselves. We’ll take care of ourselves and our staff.” — ‘Waffle Shop’ owner Ammar Ibrahim

Owner Ammar Ibrahim took a few minutes away from his cooking duties to speak with GV Wire about why he’s open despite state and city orders. He said he received inspiration from the ‘Freedom Rally‘ held at Fresno City Hall earlier this week.

“Everybody’s on the page where they want to go back to work. Just let us unlock our doors and support ourselves. We’ll take care of ourselves and our staff,” says Ibrahim.

A city code enforcement officer came by mid-morning and issued a fine for disobeying the closure order. Ibrahim tells GV Wire his customers immediately came up with the $1,000 in cash to pay the fine before the officer could even finish writing the citation.

Ibrahim says he’s had to lay off almost his entire crew. His restaurant usually has 14 employees but dwindled down to 3 as the closure dragged on for weeks through March and April. 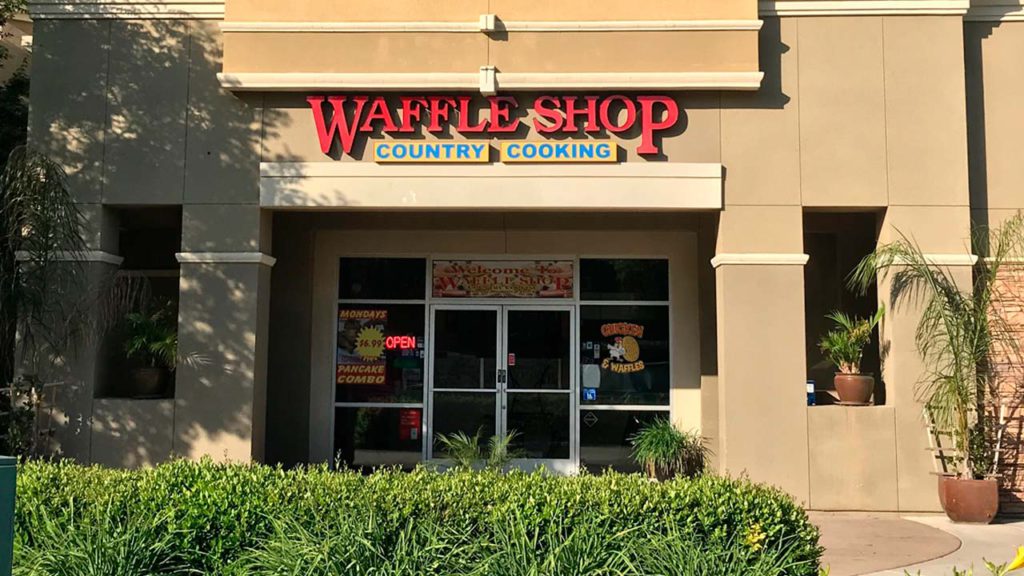 The owner of the ‘Waffle Shop’ at Figarden and Brawley reopened for dine in service this week despite local and statewide closure orders. (GV Wire/Jim Jakobs)

The money he’s lost is difficult for him to speak about. “60 days, well over $500,000 in sales,” Ibrahim said, as his voice cracked a bit. “That’s not including out of pocket expenses between rent and utilities and equipment failure that’s just from it not being used.”

He announced the end of his restaurant’s pandemic-induced closure in a Facebook post to his customers on Thursday.

“As long as I am a free man.” Ibrahim said, he plans to remain open.

Ibrahim wants people to understand his motivation. “I’m doing this, not for the money. I’m doing it as a statement that we do need to open back up not today not yesterday but as of now. We won’t have a city left. We won’t have restaurants left if we keep on waiting.” 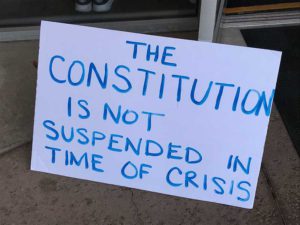 A sign greets customers at the door. (GV Wire/Jim Jakobs)

City of Fresno inspectors paid him a visit Thursday to advise him on the about local shelter-in-place regulations, but did not issue a citation or demand he close, Ibrahim said.

As Ibrahim described the Thursday visit, “They gave me some papers saying what the current ordinances is to be followed and so forth. But they didn’t verbally say if it was a warning, or if a fine is going to follow or anything within that nature.”

The city took more forceful action Friday morning. “We understand their frustration, but we can’t ignore their actions. The fines will pile up if the owner chooses to stay open in the days ahead,” said city spokesman Mark Standriff.

“We understand their frustration, but we can’t ignore their actions. The fines will pile up if the owner chooses to stay open in the days ahead.” — city of Fresno spokesman Mark Standriff.

“I know this person’s frustration,” Karbassi said. “We have to be a society of law and order. We are doing everything we can, and really it’s on the governor to create those protocols so we can open up our restaurants and our hair salons as fast as possible.”

Karbassi’s message to the business community is that he understands their frustration. “I ask folks, please, I know it’s tough. Be patient with us because if we start opening and we’re out of control, the governor’s going to drag his heels and say you know what, no you can’t open because Fresno can’t handle it.”

Karbassi met with owner Ibrahim today and emerged from the restaurant saying it was a productive meeting, and he and the owner understand each sides point of view. They agreed to keep the conversation going.

Ibrahim says, “We’ve been patient. That’s the reality of it.” He says he’s prepared to pay fines if necessary. But he acknowledges he may not be able to sustain that position for long, given his his limited profit margins.

City Council Member Garry Bredefeld decided to have lunch there today in a show of support for the owner. “This is about freedom. This is about Constitutional rights, it’s about liberty. We’ve got a thing called the Constitution, it didn’t get suspended because Newsom or Brand wanted it suspended, or there was a virus,” said Bredefeld. 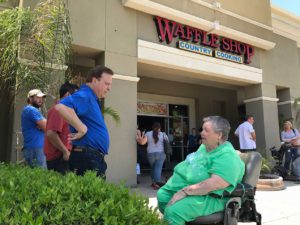 City Council Member Garry Bredefeld speaks with a customer of the ‘Waffle Shop’ during day two of their reopening. (GV Wire/Jim Jakobs)

GV Wire spoke with a couple of ‘Waffle Shop’ customers this morning.

Steve Lee said he had no concerns going inside. “Do you know anyone affected? Do you personally know anybody? I’m here to support the guy, come on.”

Alfred Burke joined his friend for breakfast. “It’s nice to get out of the house. I’m a lousy breakfast cook. I get to come out and support a local business and keep everybody going,” says Burke. “I’m on the side that says if you’re fearful stay home, if you’re not fearful go out.”

Gov. Gavin Newsom on Thursday loosened some aspects of his stay-at-home order, but the resumption of dine-in restaurant service is not included in the state’s updated rules at the present time.

Newsom said individual counties could loosen restrictions further and faster than the state if they are able to meet stringent requirements relating to COVID-19 containment. Among them: No virus deaths and no more than one active case per every 10,000 residents within the previous 14 days, a minimum of 1.5 tests administered per 1,000 residents and a minimum of 15 contact tracers per 100,000 residents.

Some rural counties, including Modoc, Yuba and Sutter have seen a low number of cases and deaths and have already allowed restaurants to reopen in defiance of the state order. Modoc is among about a dozen rural counties reporting no deaths from COVID-19.

Masks to Become Part of Life in California, but Rules Vary