As COVID Outbreak Wanes, Carrier Roosevelt Prepares to Head Back to Sea 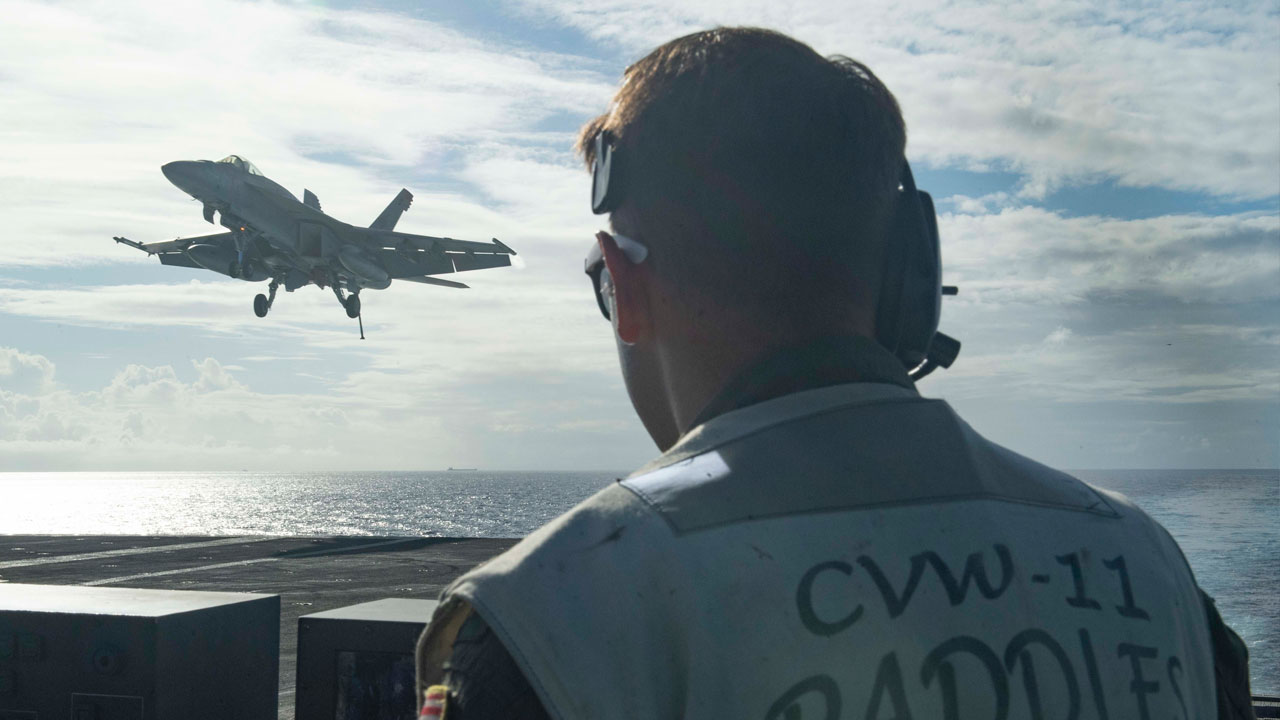 It’s time to get back to work for the crew aboard the USS Theodore Roosevelt. That includes close to 800 sailors from the Valley’s Navy jet base at Lemoore.

On board the coronavirus-stricken carrier, work is underway to get the aircraft carrier ready to head back out to sea. For the ship’s commander, Capt. Carlos Sardiello, the road to recovery has been a challenge. For the crew sidelined in Guam for more than a month, it’s been an emotional roller coaster.

More than 4,000 crew members went ashore last month. While more than 2,000 are back on board, at least 1,000 are still testing positive for the virus and remain on land. And the close to 700 crew members who had been protecting and running the Roosevelt and systems aboard have now moved into hotels and other facilities on the island for their quarantine.

Sardiello was a former Roosevelt captain when he abruptly returned to the ship in early April to take command after Capt. Brett Crozier was fired for urging faster action to stem the virus outbreak onboard. In an Associated Press interview from the ship late Monday night, Sardiello said he had a simple message to the crew when he came aboard: “We have an unprecedented mission that we have never faced before. We’re gonna face it together.”

More than 4,000 crew members went ashore last month. While more than 2,000 are back on board, at least 1,000 are still testing positive for the virus and remain on land. And the close to 700 crew members who had been protecting and running the Roosevelt and systems aboard have now moved into hotels and other facilities on the island for their quarantine.

When it’s time to return to the ship, boarding takes place in slow, meticulous waves. Wearing gloves and masks, the crew members climb onto sterile buses only after they’ve had two negative tests for the virus. They are screened and checked when they get on the bus and again before they board the ship. And even a simple sniffle can get them turned back.

Those who had stayed on the ship did deep cleaning four times a day. And as they left the ship to go onto Guam for their own quarantine period, the turnover to the clean crew was a bit of a dance. According to Sardiello, those leaving the ship backed out like painters, cleaning as they stepped out of their workspaces. And as they left by one door, the virus-free crew came in another, cleaning as they moved aboard.

The mechanics of the turnover was only one hurdle. 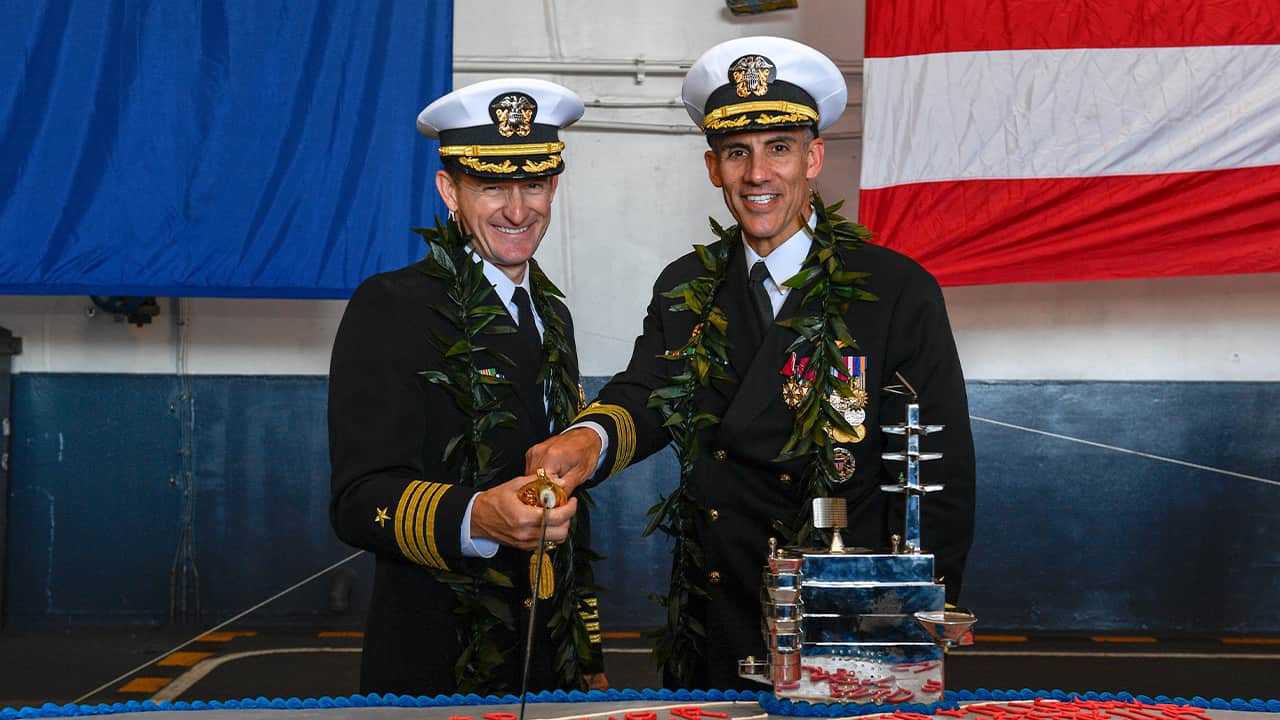 In this Nov. 19, 2019, photo provided by the U.S. Navy, Capt. Brett Crozier, left, then the new commanding officer of the aircraft carrier USS Theodore Roosevelt (CVN 71), and outgoing Capt. Carlos Sardiello cut a cake in the ship’s hangar bay during a change of command ceremony reception. Crozier relieved Sardiello to become the 16th commanding officer of Theodore Roosevelt. Sardiello was called on to step in as commander of the Roosevelt after Crozier was fired for sending an email pleading with commander to act more quickly to address the growing outbreak on the ship. (Seaman Apprentice Olympia O. McCoy/U.S Navy via AP)

The Hardest Part for the Crew Was Having Crozier Pulled Out

When Sardiello got the call to go to Guam and take over, he contacted a couple of mentors for advice and then used the flight from Norfolk, Virginia, to formulate the message he would give to the crew. Just days before he left for Guam, thousands of Roosevelt sailors had moved off the ship into quarantine. And those still on board had watched as their beloved captain strode off the ship, fired for trying to speak up for their well-being. Videos of sailors chanting Crozier’s name as he left went viral online.

The hardest part for the crew, said Air Traffic Controller 1st Class Daniel Wright, was having Crozier pulled out, particularly when the crew believed he was fighting for them.

“It was definitely a bit of a roller coaster with morale and emotions. There was a lot of uncertainty in the beginning. when we were trying to figure out what the plan of action would be,” Wright said. “I think everyone’s kind of recovering. I know everyone’s goal is to keep everyone motivated.”

Sardiello, who had been captain of the Roosevelt until last November, knew the morale problem and mapped out his message on the plane. When he took the microphone on the ship, he said, he told them that “they knew me from before. I had their back then, and I have their back now. And we’re going to move out.”

Wright, who’s been in the Navy for 10 years, did three weeks of quarantine at a hotel on Guam, watching a lot of Netflix and Amazon Prime programs, and talking to his family in California. He said information about Crozier and the ship was getting to the news media “faster than we could get in contact with our families,” so it was a relief to let them know the sailors were all safe.

Wright said it was also fortunate that Sardiello was able to come back and take charge of a ship that he was familiar with “and get us back on track.”

Sardiello said the crew just needed to know there was a plan.

Still, Uncertainty Hangs Over the Crew

“You’ve just got to give them direction and give them the tools that they need,” he said. “Then, whatever you put in front of them — they’re going to knock it out of the park.”

The Roosevelt is expected to head out to sea in a couple of weeks to do training, check the systems and re-certify the air crews.

Wright said Crozier still has the support of the crew. Asked what his message to Crozier would be, he said: “Captain Crozier, I would just like to say thank you. Thank you for everything you’ve done for us.”

The sailors still in quarantine will be left behind in Guam, Sardiello said, but the ship will return and pick them up after the training. Everything will be done methodically, he said, based on the conditions on the ship.

On the ship, there is a new normal.

“We’re not bunching up like little kids’ soccer. We’re wearing masks. We look like we’re going off to surgery,” said Sardiello, who did 16 days of quarantine in his quarters after he got on the ship. “And we’re mindful of cleaning at a very high level.”

He said chairs in the dining halls are further apart, and they serve meals almost continuously so that smaller numbers of sailors can eat in shifts.

And, still, uncertainty hangs over the crew.

Adm. Mike Gilday, the Navy’s top officer, recommended late last month that Crozier be reinstated as ship captain. But after presenting that plan to Defense Secretary Mark Esper, the Navy decided to conduct a broader investigation into how the virus spread onto the carrier, how commanders in the region communicated about the crisis and how quickly they reacted.

The added review is supposed to be done by the end of the month, and it effectively delays a decision on Crozier’s reinstatement.

Wright said Crozier still has the support of the crew. Asked what his message to Crozier would be, he said: “Captain Crozier, I would just like to say thank you. Thank you for everything you’ve done for us.”

Wright added, “He started with us and we’re looking forward to meeting up with him in the future.”

Related Topics:coronavirusUSS Theodore Roosevelt
Up Next

Nearly $1 Million Dumped on Side of Road in Merced County