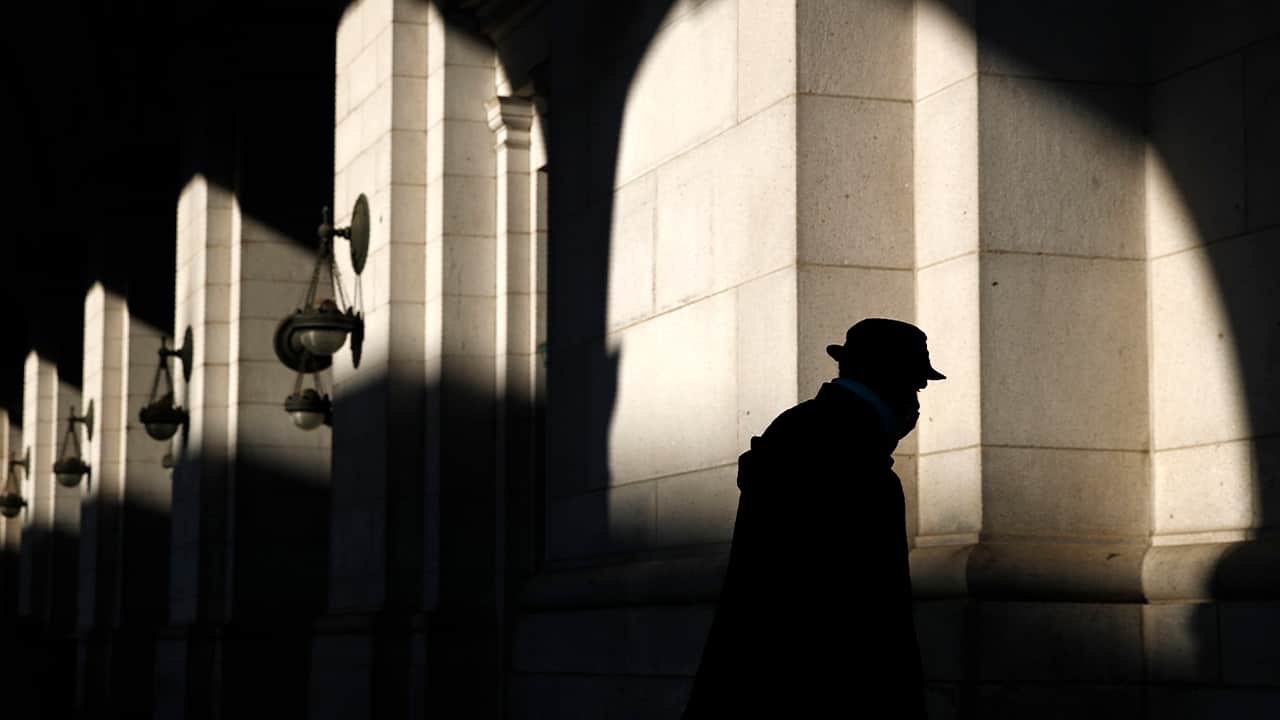 WASHINGTON — One out of every four American adults say someone in their household has lost a job to the coronavirus pandemic, but the vast majority expect those former jobs will return once the crisis passes, according to a new poll from The Associated Press-NORC Center for Public Affairs Research.

The economic devastation writ by COVID-19 is clear: 26.4 million people have lost their job in the past five weeks, millions of homeowners are delaying mortgage payments and food banks are seeing lines of cars that stretch for miles. Forty-six percent of all Americans say their household has experienced some form of income loss from layoffs, reduced hours, unpaid leave or salary reductions.

And yet, the survey finds a majority of Americans still feel positive about their personal finances. One possible reason: Among those whose households have experienced a layoff, 78% believe those former jobs will definitely or probably return. Another positive sign: The percentage of workers who say their household has lost a source of income is not significantly different from a few weeks ago.

Seventy-one percent of Americans now describe the national economy as poor, up from 60% three weeks ago and 33% in January. At the same time, 64% call their personal financial situation good — a number that remains largely unchanged since before the virus outbreak began.

Some of the resiliency can likely be traced to the nearly $2 trillion rescue package enacted by Congress that expanded jobless benefits, extended forgivable loans to small businesses and provided a government check to most Americans — money that has helped stabilize some families’ finances. 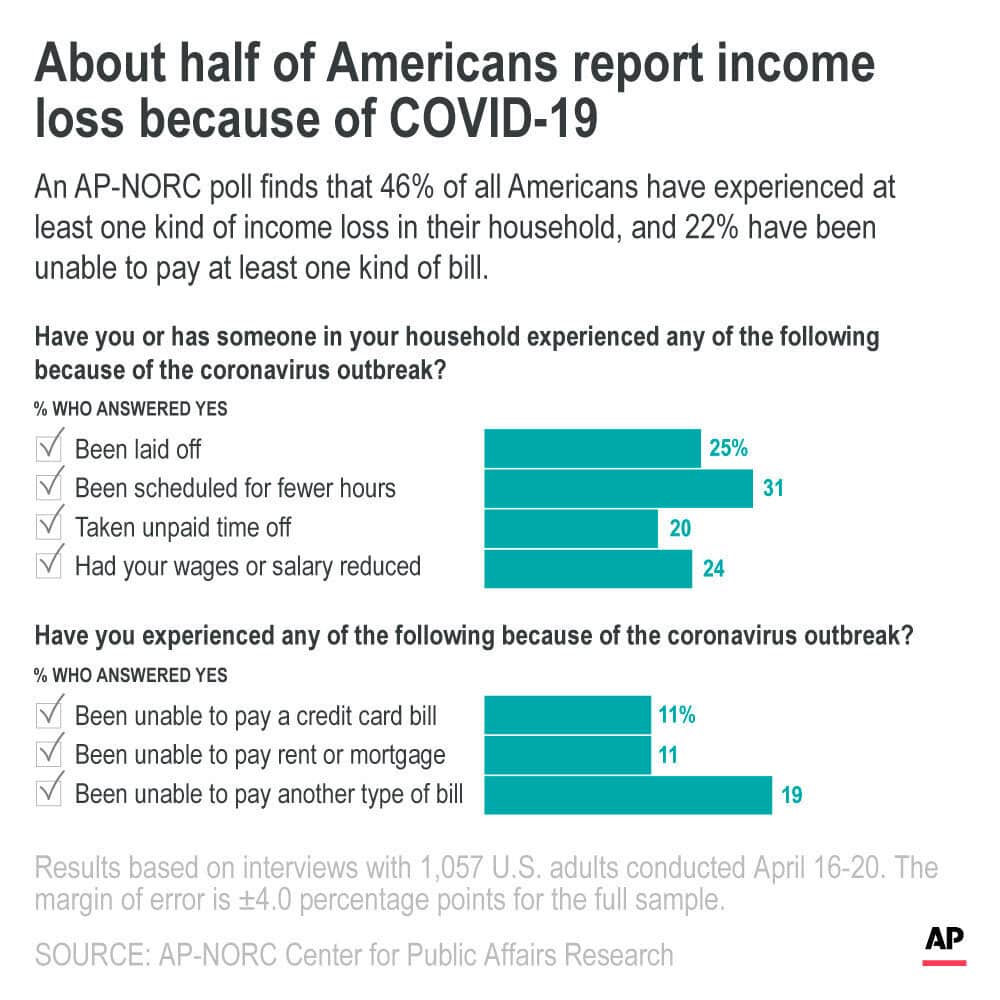 Skylar Banks, 24, used her 2019 tax refund and a separate government check for $3,000 to prepay six months of rent on her house. Her plan: to ensure her family’s housing is secure in case coronavirus infections spike in a second wave later this year and the nation’s economy gets worse.

“We’re not sure how many people actually have COVID-19,” said Banks, who lives in Dyersville, Tennessee, and works at Walmart. “If they open everything back up, we have no clue what is going to happen.”

Indeed, the country is split on whether the economy will rebound over the next year. Forty-five percent expect it will improve, while 37% say it will worsen. Just 17% expect it to stay the same.

The survey found Americans overwhelmingly support stay-at-home orders and other efforts to slow the spread of the coronavirus — 61% described efforts in their area as about right, while 26% said they didn’t go far enough — even as those actions have forced an untold number of businesses to close.

Lower income households and those with less education appear especially hard hit by job losses – 29% of those whose families earn less than $50,000 a year said their household experienced a job loss, compared with 22% of those who make more. Similarly, 28% of those without a college degree experienced a household layoff, while just 19% with a degree said the same. 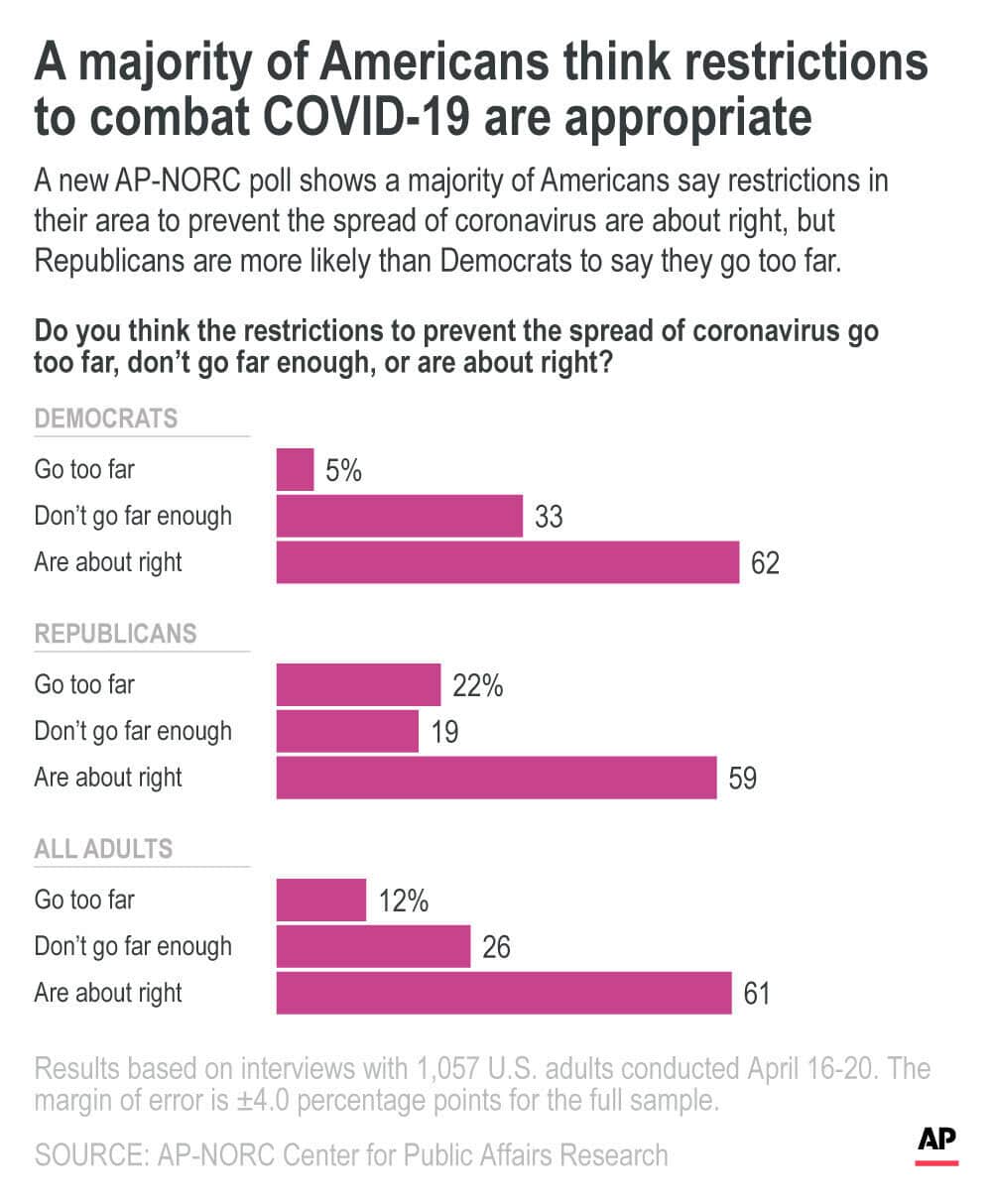 More than half of Americans, 58%, think the government has not done enough to help small businesses, while 53% say the same of aid to individuals. Meanwhile, about 4 in 10 think too much assistance has been offered to larger corporations. The poll was conducted before Congress passed a new bill worth nearly $500 billion aimed at helping small businesses and hospitals.

Brandon Reynolds, 45, resells vintage toys, jewelry and artwork online. The Houston resident’s earnings have been solid enough to cover the monthly rent of his roommate, a barber who cannot work because of stay-at-home orders. But Reynolds has only three months of inventory, and he might not be able to restock if the pandemic keeps thrift stores and flea markets closed. 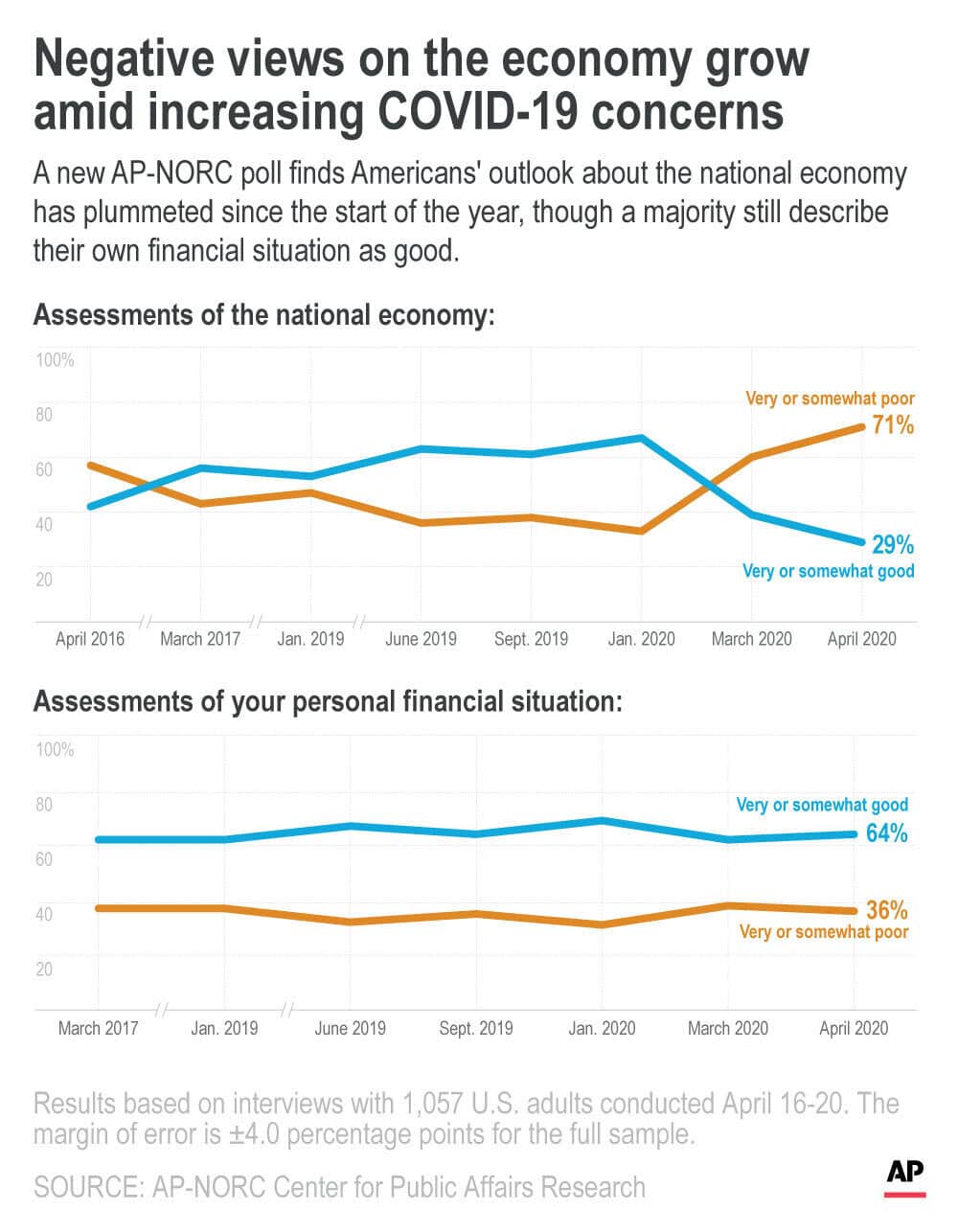 “I’m definitely not ready to be running around in the streets with a lot of people,” he said. “Not enough people are taking this seriously.”

Overall, 52% of Americans say they approve of how President Donald Trump is handling the economy. Trump’s overall approval rating stands at 42%. Even though 53% of Republicans said national economic conditions were poor, 88% of them approve of Trump’s economic stewardship. Twenty-three percent of Democrats approve, even as 90% call the economy poor.

Monique Hewan, a nursing student in Cold Spring, Kentucky, said the outbreak only appears to have intensified political tensions as some Republican governors make plans to allow some businesses to reopen and to ease other restrictions aimed at slowing the spread of the virus.

“It all depends on whether you’re red and blue as to how you think about it,” she said. “The calls for older people to die for the sake of the economy — it’s just insanity.” 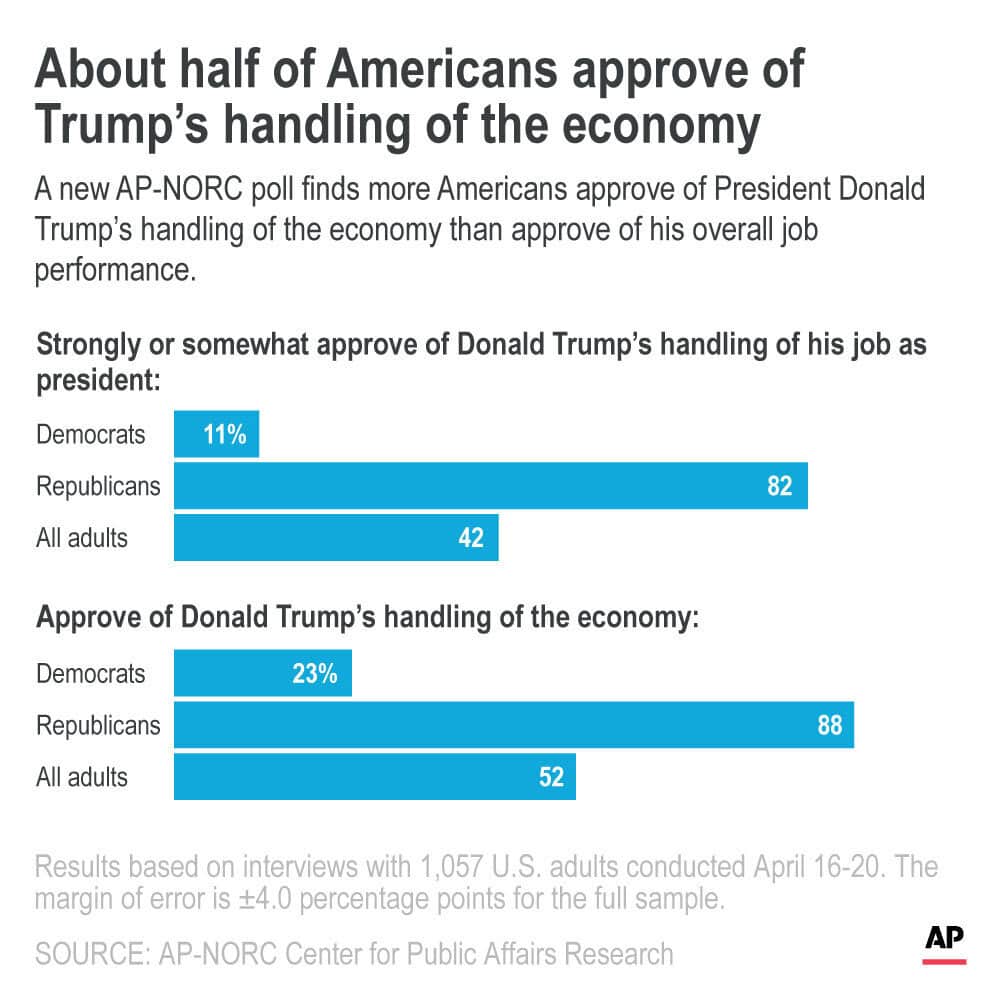 The AP-NORC poll of 1,057 adults was conducted April 16-20 using a sample drawn from NORC’s probability-based AmeriSpeak Panel, which is designed to be representative of the U.S. population. The margin of sampling error for all respondents is plus or minus 4 percentage points. Respondents were first selected randomly using address-based sampling methods and later were interviewed online or by phone.

Taxpayers Will Pay Restaurants to Feed Seniors in California

Trump: Postal Service Must Charge Amazon More, or No Loan