NEW YORK — Unemployment in the U.S. is swelling to levels last seen during the Great Depression of the 1930s, with 1 in 6 American workers thrown out of a job by the coronavirus, according to new data released Thursday. In response to the deepening economic crisis, the House passed a nearly $500 billion spending package to help buckled businesses and hospitals.

More than 4.4 million laid-off Americans applied for unemployment benefits last week, the government reported. In all, roughly 26 million people — the population of the 10 biggest U.S. cities combined — have now filed for jobless aid in five weeks, an epic collapse that has raised the stakes in the debate over how and when to ease the shutdowns of factories and other businesses.

More than 4.4 million laid-off Americans applied for unemployment benefits last week, the government reported. In all, roughly 26 million people — the population of the 10 biggest U.S. cities combined — have now filed for jobless aid in five weeks, an epic collapse that has raised the stakes in the debate over how and when to ease the shutdowns of factories and other businesses.

In the hardest-hit corner of the U.S., evidence emerged that perhaps 2.7 million New York state residents have been infected by the virus — 10 times the number confirmed by lab tests.

A small, preliminary statewide survey of around 3,000 people found that nearly 14% had antibodies showing they had been infected, Gov. Andrew Cuomo said. Just in New York City, with a population of 8.6 million, Health Commissioner Oxiris Barbot said as many as 1 million may have been infected.

In Washington, many House lawmakers wore face masks and bandannas — and some sat in the otherwise vacant visitors gallery to stay away from others — as they debated the latest spending package. A near-unanimous vote sent it to President Donald Trump in the evening.

Anchoring the bill is the administration’s $250 billion request to replenish a fund to help small- and medium-size businesses with payroll, rent and other expenses. Trump said the bill “will help small businesses to keep millions of workers on the payroll.” 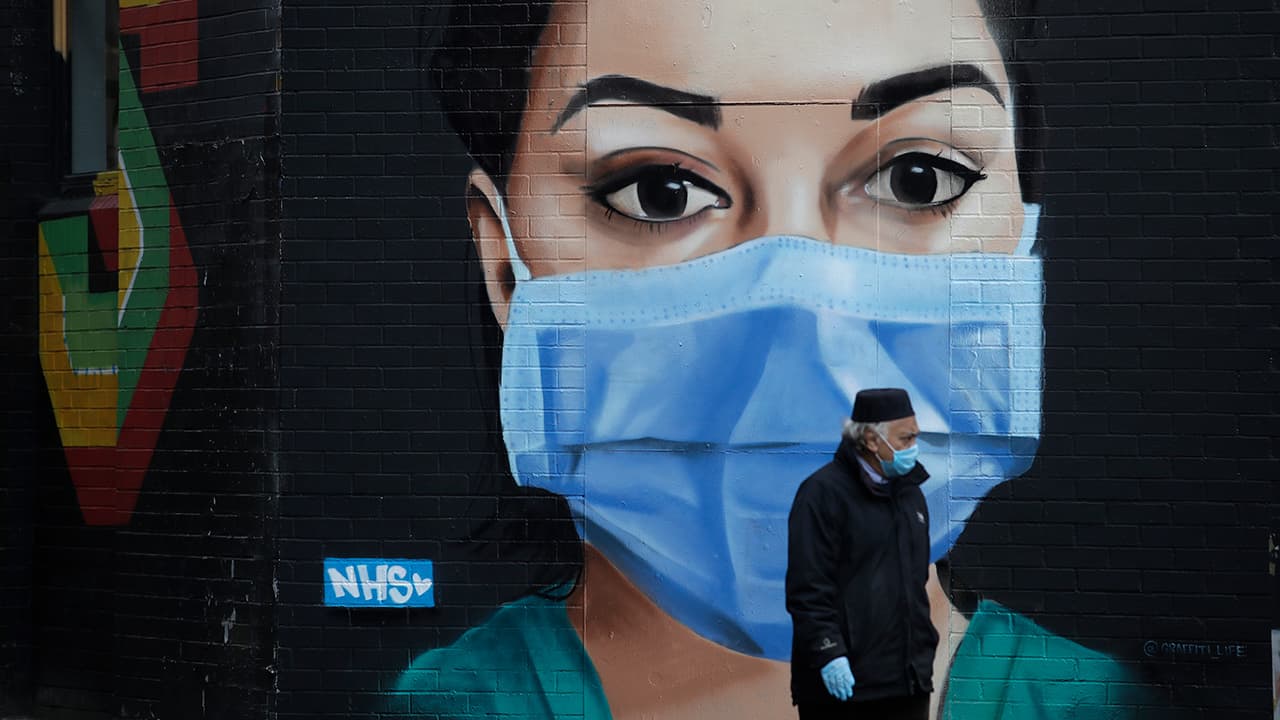 A man wearing a face mask and gloves to protect from coronavirus walks past a recently painted mural by professional street artist David Speed and the Graffiti Life collective to show appreciation for the people who work in the NHS (National Health Service), in east London, Thursday, April 23, 2020. The highly contagious COVID-19 coronavirus has impacted on nations around the globe, many imposing self isolation and exercising social distancing when people move from their homes. (AP Photo/Matt Dunham)

Abroad, there was mixed news about the epidemic. Some countries, including Greece, Bangladesh and Malaysia, announced extensions of their lockdowns. Vietnam, New Zealand and Croatia were among those moving to end or ease such measures.

In Africa, COVID-19 cases surged 43% in the past week to 26,000, according to John Nkengasong, director of the Africa Centers for Disease Control and Prevention. The figures underscored a recent warning from the World Health Organization that the virus could kill more than 300,000 people in Africa and push 30 million into desperate poverty.

Brazil’s health ministry confirmed 407 deaths due to the outbreak in the last 24 hours, a daily high for the country.

Huge lines have formed at food banks from El Paso, Texas, to the Paris suburbs, and food shortages are hitting Africa especially hard.

At a virtual summit, European Union leaders agreed to set up a massive recovery fund to help rebuild the 27-nation bloc’s ravaged economies. While no figure was put on the plan, officials said 1-1.5 trillion euros ($1.1-1.6 trillion) would be needed.

The coronavirus has killed nearly 190,000 people worldwide, including more than 100,000 in Europe and about 47,000 in the United States, according to a tally compiled by John Hopkins University from official government figures. The true numbers are almost certainly far higher.

In the U.S., the economic consequences of the shutdowns have sparked angry rallies in state capitals by protesters demanding that businesses reopen, and Trump has expressed impatience over the restrictions.

Some governors have begun easing up despite warnings from health authorities that it may be too soon to do so without sparking a second wave of infections. In Georgia, gyms, hair salons and bowling alleys can reopen Friday. Texas has reopened its state parks. 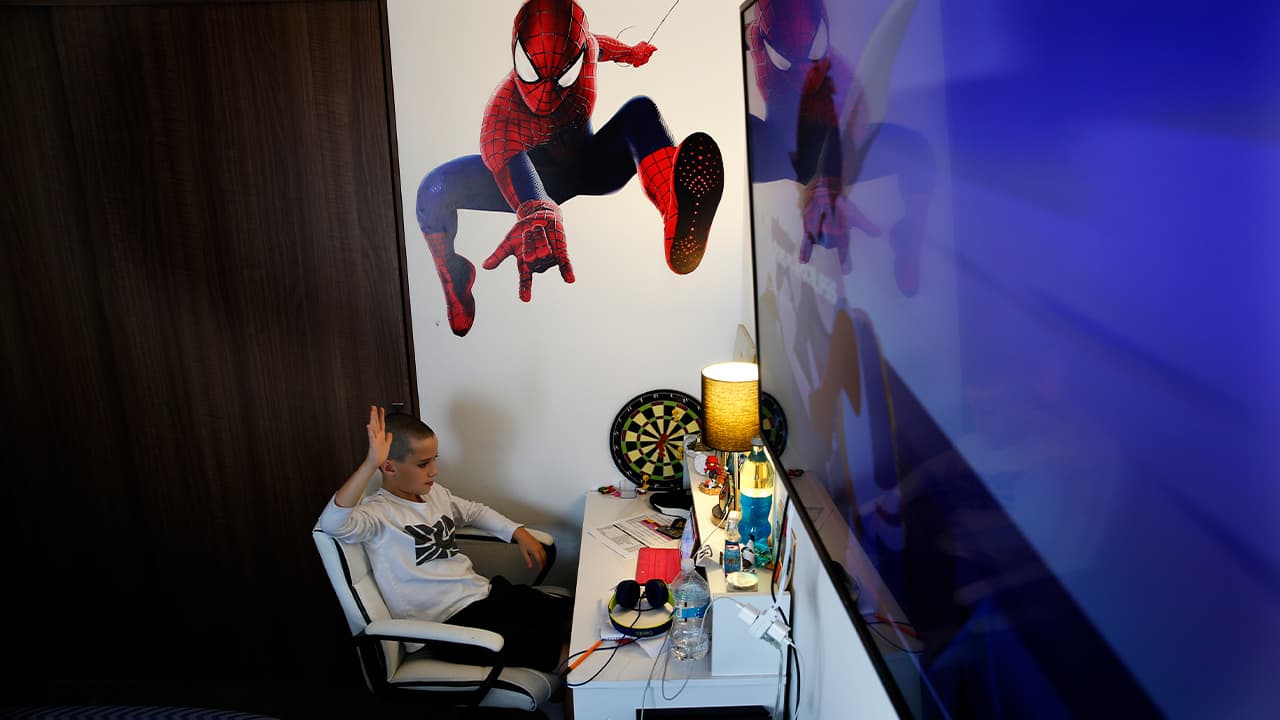 Andres Rodriguez, 8, attends virtual classes from his room in an apartment in Mexico City, Thursday, April 23, 2020. Andres along with his sister Raquel, father Bernardo Rodriquez and mother Patricia Fernandez have self-quarantined for the last three weeks to protect themselves against the spread of the new coronavirus. (AP Photo/Marco Ugarte)

In Places Like Italy, Spain and France, Experts Say It Is Far From Over

Few Americans count on Trump as a reliable source of information on the outbreak, according to a survey from The Associated Press-NORC Center for Public Affairs Research. About 23% said they have high levels of trust in what he tells the public, while 21% said they trust him a moderate amount.

On the economic front, few experts foresee a downturn as severe as the Depression, when unemployment remained above 14% from 1931 to 1940, peaking at 25%. But unemployment is considered likely to remain elevated well into next year and probably beyond, and will surely top the 10% peak of the 2008-09 recession.

On the economic front, few experts foresee a downturn as severe as the Depression, when unemployment remained above 14% from 1931 to 1940, peaking at 25%. But unemployment is considered likely to remain elevated well into next year and probably beyond, and will surely top the 10% peak of the 2008-09 recession.

Janet Simon, laid off as a waitress at an IHOP restaurant in Miami, said she has just $200 in her name and is getting panic attacks because of uncertainty over how she will care for her three children. Simon, 33, filed for unemployment a month ago, and her application is still listed as “pending.”

“I’m doing everything to keep my family safe, my children safe, but everything else around me is falling apart,” Simon said. “But they see it, no matter how much I try to hide my despair.”

Corey Williams, 31, was laid off from his warehouse job in Michigan a month ago and saw his rent, insurance and other bills pile up while he anxiously awaited his unemployment benefits. That finally happened on Wednesday, and he quickly paid $1,700 in bills.

While the health crisis has eased in places like Italy, Spain and France, experts say it is far from over, and the threat of new outbreaks looms large. 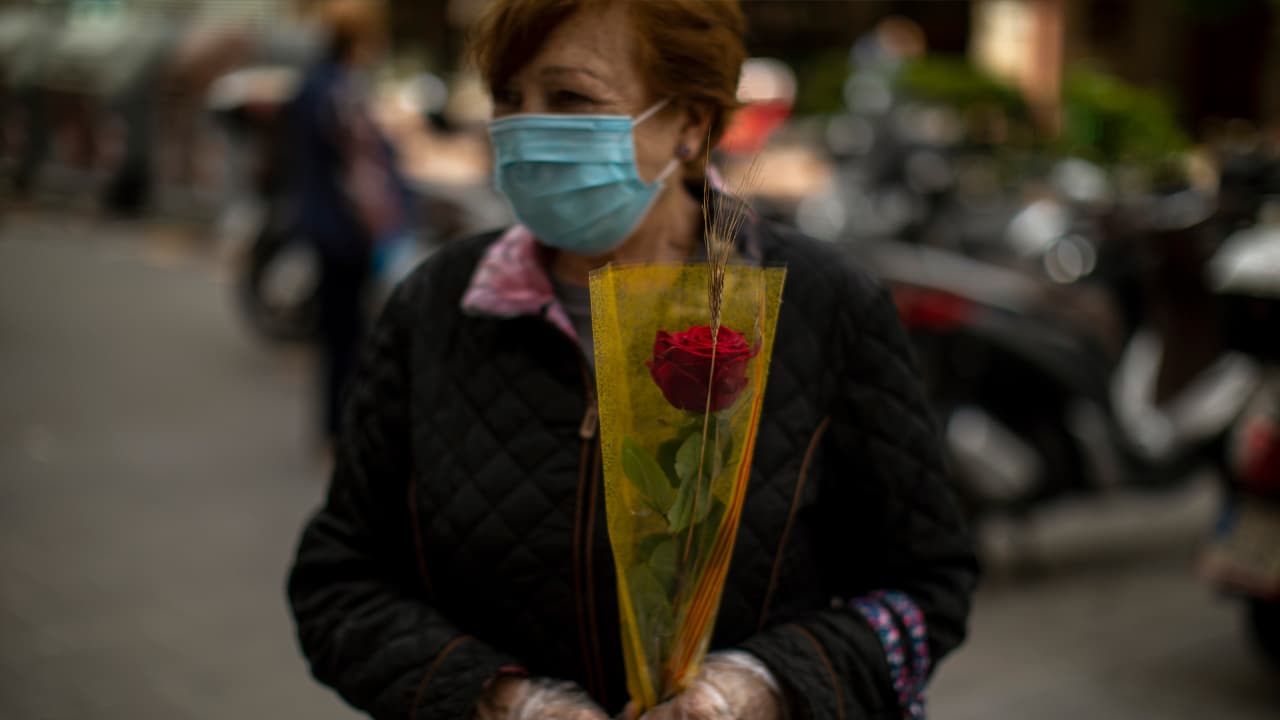 Maria, wearing a face mask and gloves, holds a rose as she queues to enter in a shop during Saint Jordi day, in Barcelona, Spain, Thursday, April 23, 2020 as the lockdown to combat the spread of coronavirus continues. (AP Photo/Emilio Morenatti)

Governments Are Bearing Risk in Mind With the Onset of Ramadan

“The question is not whether there will be a second wave,” said Dr. Hans Kluge, the head of the WHO’s Europe office. “The question is whether we will take into account the biggest lessons so far.”

German Chancellor Angela Merkel criticized some German states for moving too briskly in trying to reopen their economies. Germany has been praised for its approach to the pandemic and has a much lower reported death toll than other large European countries.

“We’re not living in the final phase of the pandemic, but still at the beginning,” Merkel warned. “It would be a shame if premature hope ultimately punishes us all.”

Governments are bearing that risk in mind with the onset of Ramadan, the holy month of daytime fasting, overnight festivities and communal prayer that begins for the world’s 1.8 billion Muslims with this week’s new moon. Many Muslim leaders have closed mosques or banned collective evening prayer to ward off infections.

Authorities in the capital of Indonesia, the most populous Muslim-majority nation, extended restrictions to cover all of Ramadan. Turkey banned communal eating during the holiday.

Pakistani Prime Minister Imran Khan bowed to the country’s clerics, refusing to close mosques despite doctors’ warnings that such gatherings could further spread the virus in a country with a fragile health care system.