The coronavirus numbers are fake, some of the social media videos claim. “Social distancing is the new way to control you, your family and your behavior,” another commenter warns. Others say the pandemic is an overblown hoax.

The coronavirus numbers are fake, some of the social media videos claim. “Social distancing is the new way to control you, your family and your behavior,” another commenter warns. Others say the pandemic is an overblown hoax.

The loose network of Facebook groups spurring protests of stay-at-home orders across the country have fast become a hotbed of misinformation, conspiracy theories and skepticism around the coronavirus pandemic. Launched in recent weeks by pro-gun advocacy groups and conservative activists, the pages are repositories of Americans’ suspicion and anxiety — often fueled by notions floated by television personalities or President Donald Trump himself and amplified by social media accounts.

In a matter of days, the Facebook pages have mobilized protests at state capitols and collectively gained an audience of nearly 1 million followers on Facebook, according to The Associated Press’ analysis of the groups.

There’s little basis in reality for many of the claims on the sites. The coronavirus has infected millions of people worldwide, and the U.S. has recorded more deaths — 43,000 — than anywhere else in the world, according to a Johns Hopkins University count. Stay-at-home orders have been used by governments across the world — and the political spectrum — to try to contain the spread, as recommended by the world’s top health officials.

But the power of suspicion is apparent in the Facebook groups. A private group was key in enlisting people for a “Liberate Minnesota” march outside Democratic Gov. Tim Walz’s home Friday, despite his order limiting large gatherings. Trump backed the protesters on Twitter, calling to “LIBERATE MINNESOTA” right before the protest kicked off.

“We recruited some trusted friends, threw it up on Facebook Sunday night,” said conservative activist Michele Even, who oversees two Facebook groups in Wisconsin and Minnesota with a collective following of 100,000. “By Friday, we had over a thousand shares for the event.”

Under pressure after a spate of nationwide protests organized on its site, Facebook said Monday that it would ban events that don’t follow social distancing rules.

“Events that defy government’s guidance on social distancing aren’t allowed on Facebook,” the company said in a brief statement that did not explain how it would evaluate whether the events violate local ordinances. Facebook said it removed postings for events in California, New Jersey and Nebraska.

Users on the platform are still promoting future stay-at-home protests in Wisconsin, Virginia and Illinois. One Facebook ad calls for people to “descend on the Capitol building and surrounding streets, either on foot or in vehicles,” this Saturday in Denver. Some Facebook users are promoting a “drive-in” protest called Operation Gridlock to clog roads surrounding state capitols.

The movement is also becoming increasingly partisan online, with prominent conservatives urging their followers to protest Democratic governors, despite stay-at-home orders coming down in nearly every state, including some led by Republican governors.

“Every patriot should go outside, socially distanced and with masks, and protest these Democrat tyrants,” Charlie Kirk wrote last Friday to his 1.7 million Twitter followers. 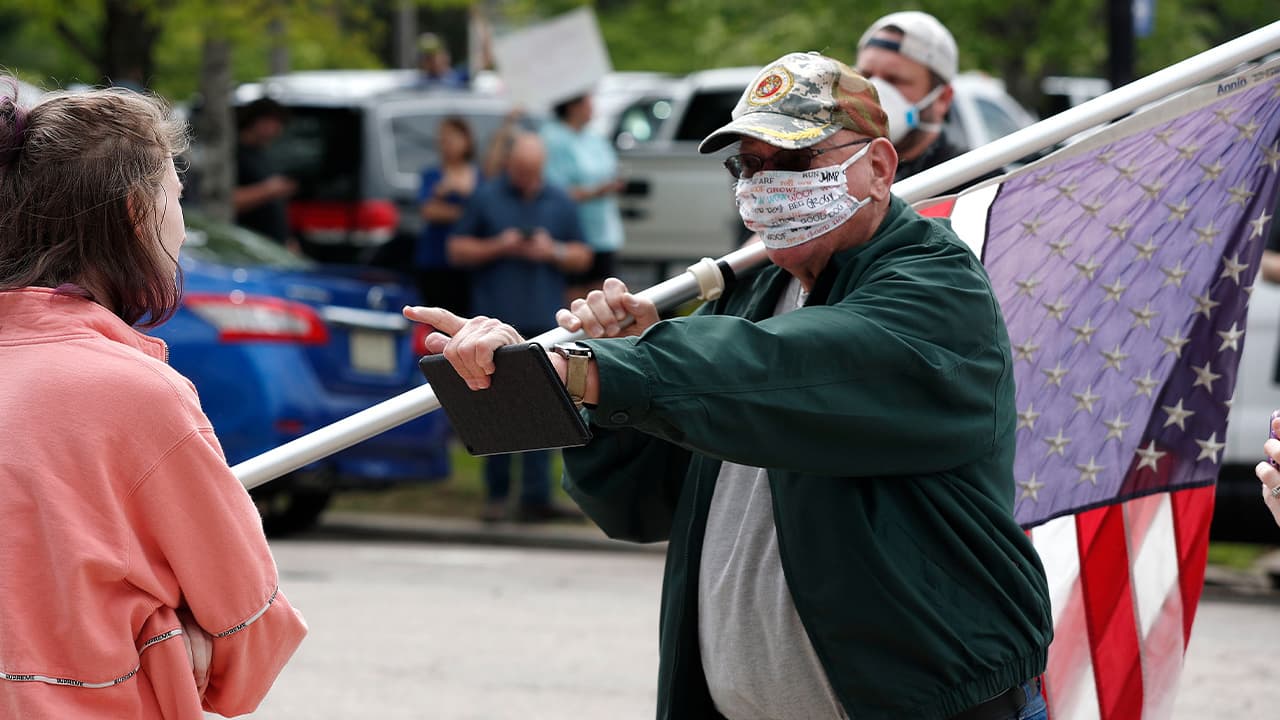 A man holding a flag engages with a counter-protester as people with ReopenNC gather in Raleigh, N.C., to press Gov. Roy Cooper to allow businesses to reopen during the COVID-19 outbreak Tuesday, April 21, 2020. (AP Photo/Gerry Broome)

Nearly Identical Claims Are Also Being Posted Across Multiple Platforms

Twitter users are also pushing YouTube video links that describe the coronavirus as a hoax or promoting farflung theories that it was created in a lab, using the hashtags ReOpen or Gridlock, said Kathleen Carley, a researcher at Carnegie Mellon University’s CyLab Security and Privacy Institute. Trump has also floated the idea that the virus is man-made.

“There are some people in these groups that have legitimate concerns about the economy, but they’re being overwhelmed. There’s a lot of these conspiracy theories, linked right into these reopen groups.” — Kathleen Carley, a researcher at Carnegie Mellon University’s CyLab Security and Privacy Institute

Nearly identical claims are also being posted across multiple platforms — from Twitter to Reddit to the Facebook groups — suggesting that the misinformation is orchestrated on some level, she added.

“There are some people in these groups that have legitimate concerns about the economy, but they’re being overwhelmed,” Carley said. “There’s a lot of these conspiracy theories, linked right into these reopen groups.”

At least some of those Facebook groups are part of a coordinated campaign.

Facebook groups in Ohio, Wisconsin, Minnesota, New York and Pennsylvania were launched by Ben Dorr and his brothers, who run pro-gun groups in several Midwestern states. The brothers have also registered several websites under the “Reopen” name that directs users to their pro-gun lobbying group and invites them to “donate” to the cause.

The Dorr brothers have spent years raising money off conservative causes like anti-abortion rights or gun rights, said Kurt Daudt, Minnesota’s Republican House minority leader. Daudt believes it’s a scam — saying he once watched them take a video outside the statehouse, claiming they were headed inside to lobby, but they left immediately after filming wrapped.

False Information Could Be Driving Some People to Protest

“They really try to take advantage of whatever issue people are passionate about at any given time and try to raise money for themselves,” Daudt said.

Dorr contends his Facebook groups are part of a “grassroots” movement to protest stay-at-home orders.

“We want to reopen these states, save these peoples livelihoods,” Dorr said in a phone interview with the AP.

He wouldn’t say precisely how many pages or websites he and his brothers operate. Calls to brothers Chris and Aaron Dorr were not returned.

Their Facebook groups are peppered with posts that predict the government will force people to get coronavirus vaccinations and videos that say health officials are intentionally inflating coronavirus death numbers.

Even, who helps run the Facebook groups in Minnesota and Wisconsin with the Dorrs, said she believes many people are unintentionally sharing misinformation on the pages.

“A lot of times people are posting because they’re not aware it is fake or false information,” she said.

But that false information could be driving some people to protest the stay-at-home orders, said Nir Hauser, the chief technology officer at VineSight, a company that tracks misinformation.

Hauser identified news articles of protesters who cited popular coronavirus conspiracy theories in interviews. One woman told a North Carolina TV station that “nobody is sick with COVID.”

“The stuff that we’re seeing online does eventually percolate to real people,” Hauser said. “It got them to leave the house, go out and protest.”