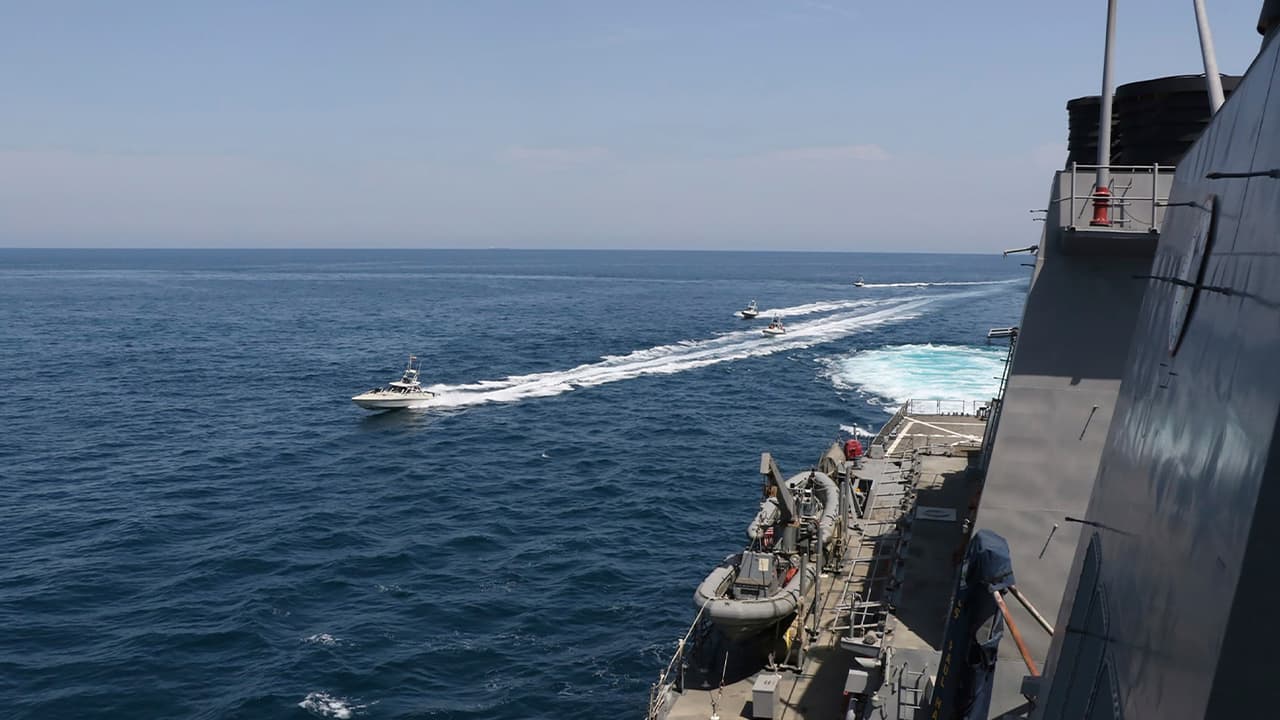 WASHINGTON — President Donald Trump said Wednesday that he has ordered the Navy to “shoot down and destroy” any Iranian gunboats that harass U.S. ships, a directive that comes a week after the Navy reported a group of Iranian boats made “dangerous and harassing approaches” to American vessels in the Persian Gulf.

“The president issued an important warning to the Iranians. What he was emphasizing is, all of our ships retain the right of self defense.” — David Norquist, the deputy secretary of defense, said at a Pentagon news conference when asked about the tweet

Trump did not cite a specific Iranian provocation in his tweet or provide details. Senior Pentagon officials gave no indication that Trump had directed a fundamental change in military policy on Iran.

“The president issued an important warning to the Iranians,” David Norquist, the deputy secretary of defense, said at a Pentagon news conference when asked about the tweet. “What he was emphasizing is, all of our ships retain the right of self defense.” He called the tweet “a very useful thing.”

Air Force Gen. John Hyten, vice chairman of the Joint Chiefs of Staff, said he thinks the Iranians understand what Trump meant. He said the Navy also understands that if an Iranian on a gunboat “has a gun and you point it at me,” that can be interpreted as an expression of hostile intent that may be answered with U.S. force.

In the tweet, Trump said: “I have instructed the United States Navy to shoot down and destroy any and all Iranian gunboats if they harass our ships at sea.”

Asked whether the tweet means a repeat of last week’s incident in the Gulf would require a lethal U.S. response, Hyten said, “I would have to be the captain of the ship in order to make that determination.” Hyten said the nature of the response “depends on the situation and what the captain sees.”

Last Wednesday, the U.S. Navy said Revolutionary Guard vessels repeatedly crossed the bows and sterns of several American ships at close range and high speed in the northern Gulf. The American vessels included the USS Paul Hamilton, a Navy destroyer and the USS Lewis B. Puller, a ship that serves as an afloat landing base. The ships were operating with U.S. Army Apache attack helicopters in international waters, the statement said.

Gen. Abolfazl Shekarchi, a spokesman for Iran’s armed forces, accused Trump of “bullying” and said the American president should focus on taking care of U.S service members infected with the coronavirus. The U.S. military had more than 2,600 confirmed cases of coronavirus as of last week, and at least two service members have succumbed to COVID-19, the disease the virus causes.

“Today, Americans must do their best to save those troops who are infected with coronavirus instead of bullying others,” Shekarchi said, according to Iran’s semi-official news agency ISNA.

Shortly before Trump’s tweet, Iran’s Revolutionary Guard said it had put the Islamic Republic’s first military satellite into orbit, dramatically unveiling what experts described as a secret space program. That launch raised concerns among experts about whether the technology could be used to help Iran develop intercontinental ballistic missiles. Iran currently has short- and intermediate-range missiles.

Hyten told reporters the lranian payload “went a very long way.” He said it was too early to say whether the launch had successfully placed a satellite in orbit. “This is just another example of Iranian malign behavior,” Hyten said.

U.S. Navy ships and Iranian Guard naval vessels occasionally have encounters in the Gulf that the U.S. calls unprofessional, but they rarely escalate or include an exchange of gunfire. Tehran views the heavy presence of American forces there as a security threat.

Iran Claimed the US Triggered That Episode

During last Wednesday’s incident in the Gulf, the U.S. Navy said the 11 Iranian gunboats’ “dangerous and provocative actions increased the risk of miscalculation and collision … and were not in accordance with the obligation under international law to act with due regard for the safety of other vessels in the area.”

According to the Navy, the Americans issued multiple warnings via bridge-to-bridge radio, fired five short blasts from the ships’ horns and long-range acoustic noise maker devices, but received no immediate response, the statement said. After about an hour, the Iranian vessels responded to the bridge-to-bridge radio queries, then maneuvered away.

According to the Navy, the Americans issued multiple warnings via bridge-to-bridge radio, fired five short blasts from the ships’ horns and long-range acoustic noise maker devices, but received no immediate response, the statement said. After about an hour, the Iranian vessels responded to the bridge-to-bridge radio queries, then maneuvered away.

American commanders are trained to make nuanced and careful judgment calls about how to respond to incidents at sea. Rather than immediately resort to the use of deadly force, commanders are expected to act based on the specific circumstances, including the threat to their own crews and adherence to the international laws of warfare. Generally, as in the case of last Wednesday’s incident, warships will issue warnings by a variety of means, including via bridge-to-bridge radio, before taking more direct action.

Tensions between the nations escalated after the Trump administration withdrew from the international nuclear deal between Tehran and world powers in 2018 and reimposed crippling sanctions on Iran. Last May the U.S. sent thousands more troops, including long-range bombers and an aircraft carrier, to the Middle East in response to what it called a growing threat of Iranian attacks on U.S. interests in the region.

The tensions spiked when U.S. forces killed Iran’s most powerful general, Qassem Soleimani, in January. Iran responded with a ballistic missile attack on a base in western Iraq where U.S. troops were present. No Americans were killed but more than 100 suffered mild traumatic brain injuries from the blasts. Also, Iran-backed Shiite militias in Iraq continue to threaten American forces there.