Hate the Trains at Blackstone & McKinley? Good News is Here. 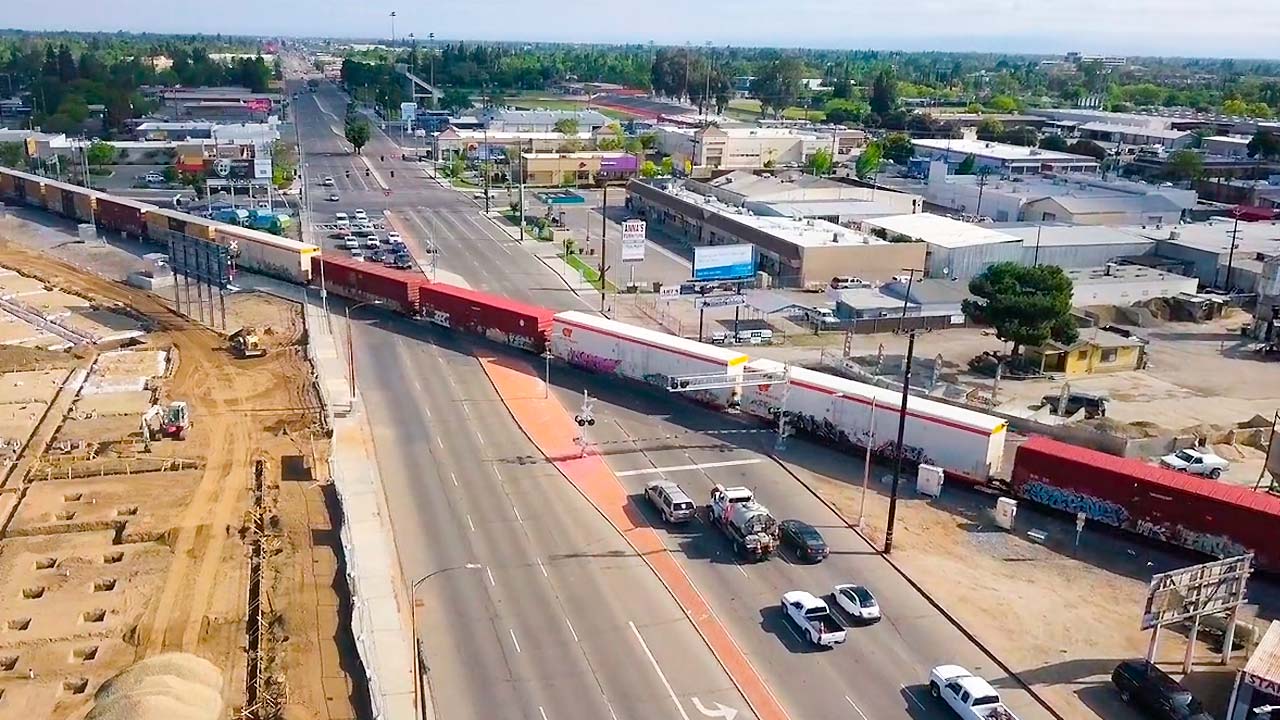 The announcement of funding to improve vehicle and pedestrian traffic at Blackstone and McKinley avenues in central Fresno received cheers from educators, planners, community activists, and elected leaders on Wednesday.

When the project is done, traffic will flow under the Burlington Northern Santa Fe railroad tracks — much as it does on Shaw Avenue east of Marks Avenue.

By making the project “shovel ready,” the city will be well-positioned to attract state and federal funding toward an effort that is expected to cost between $71 million and $80 million.

And, when the project is done, traffic will flow under the Burlington Northern Santa Fe railroad tracks — much as it does on Shaw Avenue near Marks Avenue.

“Generations of students and faculty have had to endure delays as they wait for the trains to pass so they can get to class,” Fresno City College President Carole Goldsmith said in a news release. “This project will help ease the flow of traffic to and from the campus, and it will improve the safety of students who must cross these tracks as they walk, ride, or drive to class.” 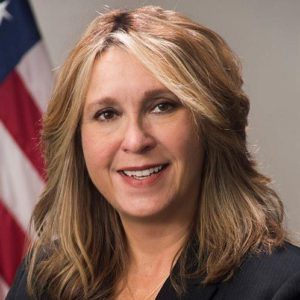 “Generations of students and faculty have had to endure delays as they wait for the trains to pass so they can get to class.” — Fresno City College President Carole Goldsmith

An average of 37 trains per day travel the tracks at Blackstone and McKinley, and the FCTA said that five people have been killed there over the past 10 years. In addition, the expectation is that the project will improve the on-time performance of the city’s express Bus Rapid Transit system.

“I want to thank FCTA for making this their No. 1 one priority for their railroad grade separation funding,” said Fresno Public Works Director Scott Mozier. “We are excited to finally see this project get started. It has long been a high priority for the city of Fresno, but without the FCTA awarding $6 million in Measure C funding today, it is unlikely we would have ever been able to get it built.”

This project complements the city’s “Better Blackstone” initiative which seeks to diversify land use along the corridor, beautify the street, and make it more pedestrian-friendly.

“I am so pleased to see the community, the city of Fresno, and FCTA coming together to provide real quality of life improvements to this historic neighborhood,” said Fresno Metro Ministry Executive Director and former city planner Keith Bergthold. “Together, we are going to build a better Fresno.”

Fresno County Supervisor Steve Brandau recalled his days as a Fresno City College student and being frustrated by the slow-moving trains.

“I was there in the ’90s and was always getting caught,” said Brandau, who is on the FCTA board. “I was probably already running late for class, and I’d be sitting there sweating bullets, waiting for the train, and worrying about finding a place to park.

“I started working on this project while on the City Council and this is a happy day for our community. This project has been needed for decades and decades.” 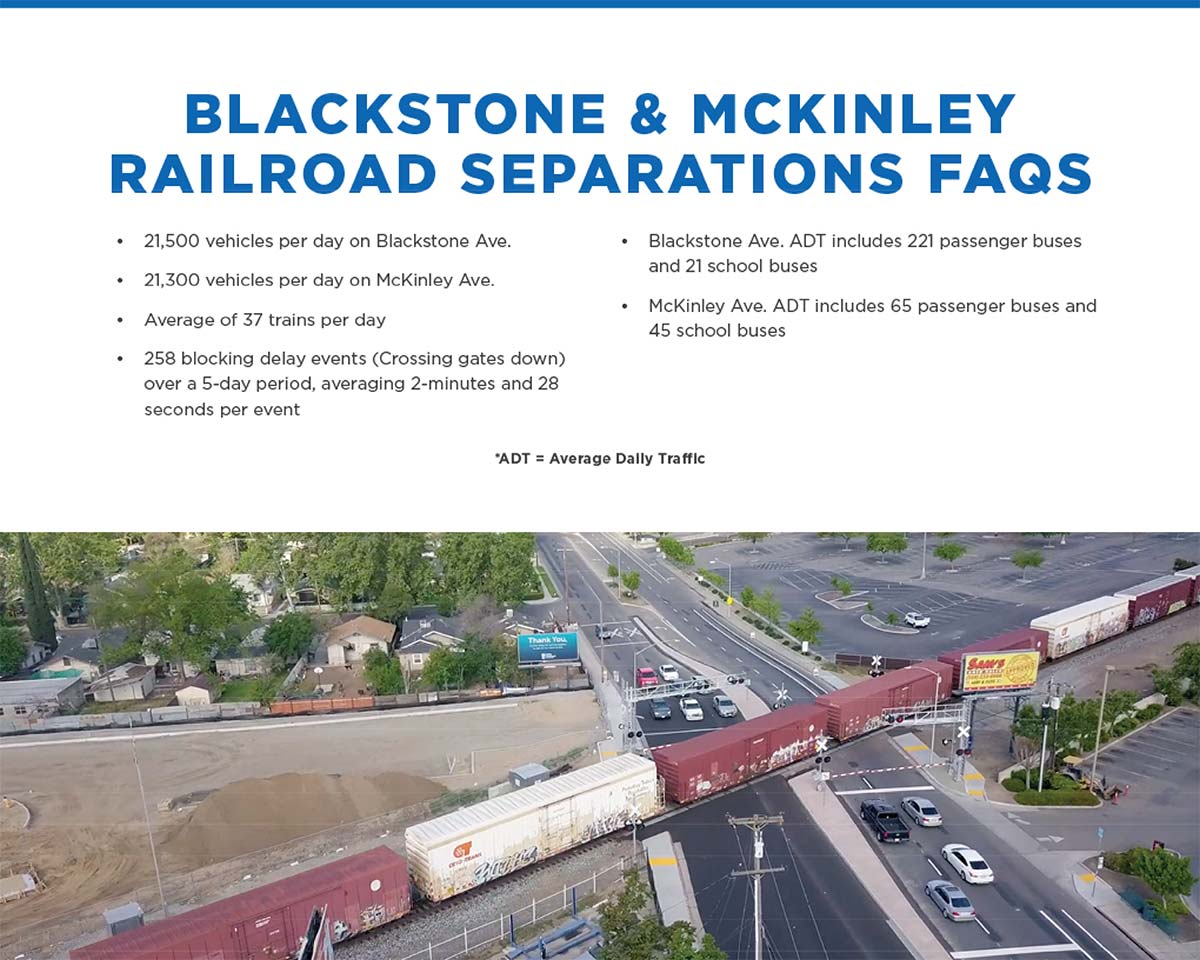 The seed money originally was designated for consolidating the BNSF and Union Pacific tracks, but when it became clear that consolidation wouldn’t happen, the FCTA looked to other projects involving the railroad lines.

“We have many worthy grade-separation projects on the list, but this one clearly rose to the top,” Brandau said.

Fresno County Supervisor Buddy Mendes, who chairs the FCTA, pointed out that the project wouldn’t be possible without Measure C, the countywide half-cent sales tax.

“I want to thank the voters of Fresno County who have twice voted to tax themselves so that we can deliver critically needed transportation projects like this one,” Mendes said.

Said Fresno City Councilwoman Esmeralda Soria: “This is just one more example of counties and cities coming together collectively to reduce air pollution, (and) increase pedestrian and vehicle safety, as well as improving the quality of near-by neighborhoods and schools.”