WASHINGTON — Despite pockets of attention-grabbing protests, a new survey finds Americans remain overwhelmingly in favor of stay-at-home orders and other efforts to slow the spread of the coronavirus. A majority say it won’t be safe to lift such restrictions anytime soon, even as a handful of governors announce plans to ease within days the public health efforts that have upended daily life and roiled the global economy. 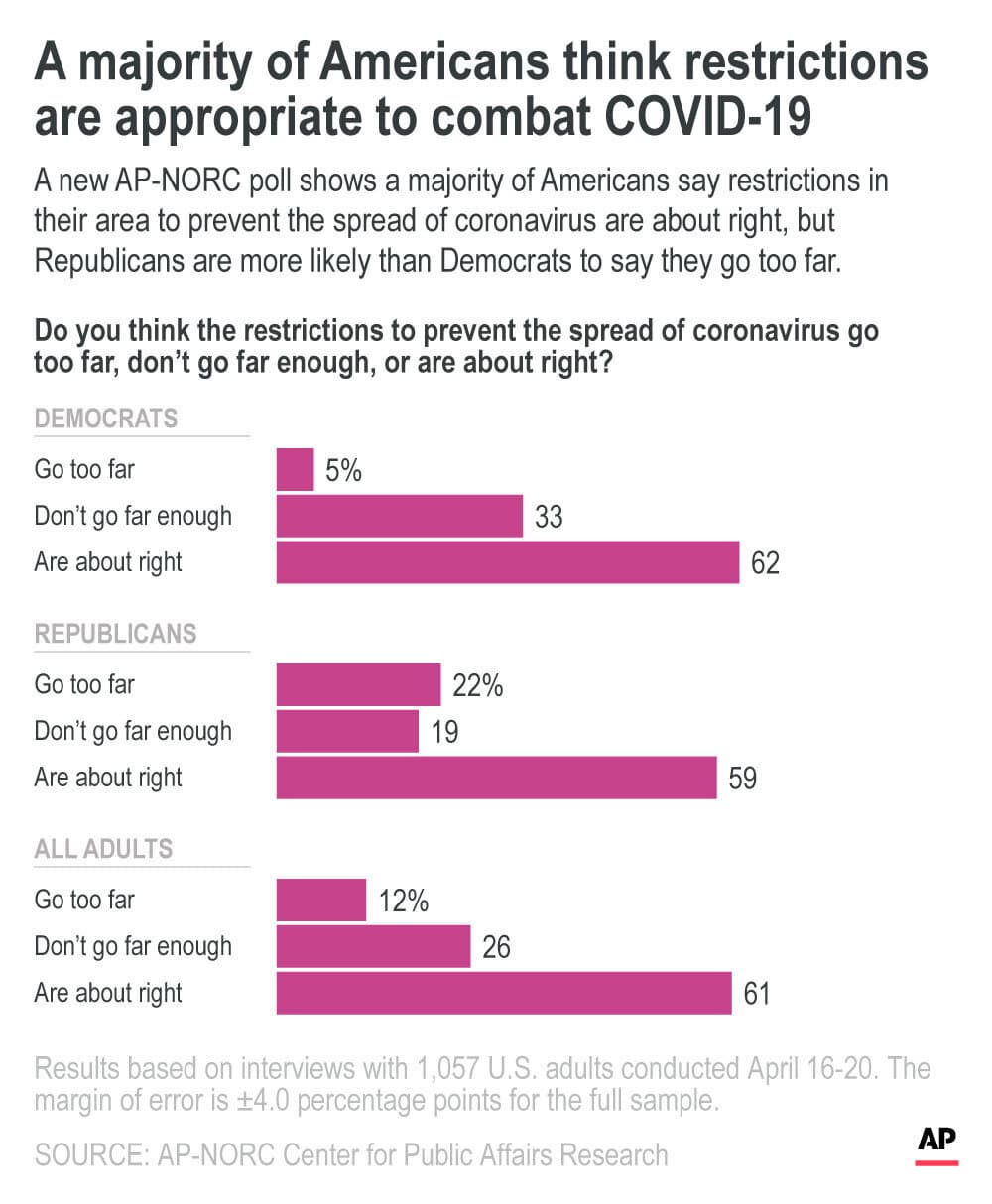 The survey from The Associated Press-NORC Center for Public Affairs Research finds that more than a month after schoolyards fell silent, restaurant tables and bar stools emptied, and waves from a safe distance replaced hugs and handshakes, the country largely believes restrictions on social interaction to curb the spread of the virus are appropriate.

Only 12% of Americans say the measures where they live go too far. About twice as many people, 26%, believe the limits don’t go far enough. The majority of Americans — 61% — feel the steps taken by government officials to prevent infections of COVID-19 in their area are about right.

About 8 in 10 Americans say they support measures that include requiring Americans to stay in their homes and limiting gatherings to 10 people or fewer — numbers that have largely held steady over the past few weeks. 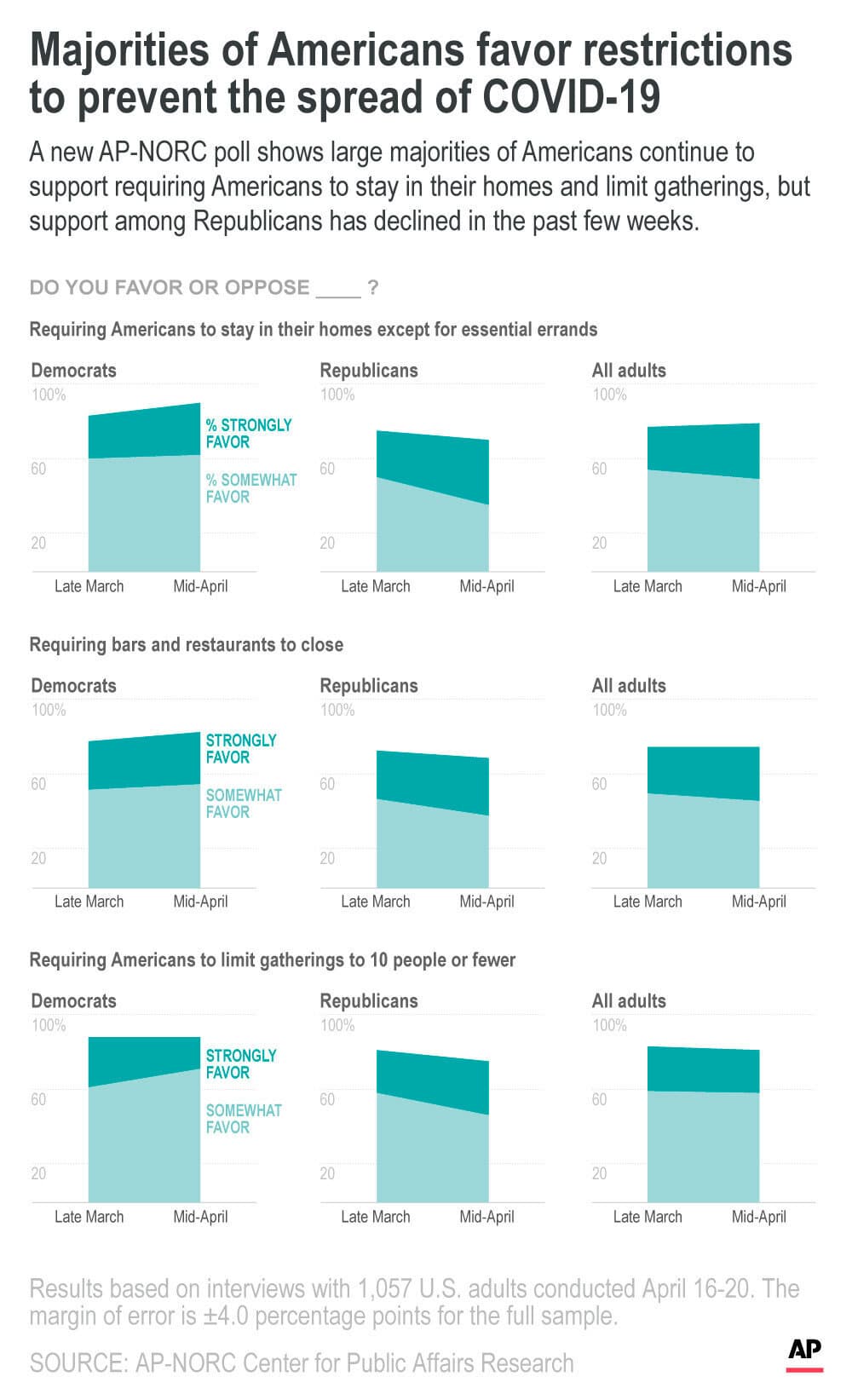 While the poll reveals that the feelings behind the protests that materialized in the past week or so in battleground states such as Michigan, Ohio, Pennsylvania and Wisconsin are held by only a small fraction of Americans, it does find signs that Republicans are, like President Donald Trump, becoming more bullish on reopening aspects of public life.

Just 36% of Republicans now say they strongly favor requiring Americans to stay home during the outbreak, compared with 51% who said so in late March. While majorities of Democrats and Republicans think current restrictions where they live are about right, Republicans are roughly four times as likely as Democrats to think restrictions in place go too far — 22% to 5%.

“They’ll be lifted, but there are still going to be sick people running around,” said 66-year-old Lynn Sanchez, a Democrat and retired convenience store manager from Jacksonville, Texas, where Gov. Greg Abbott has reopened state parks and plans to announce further relaxations next week. “And we’re going to have another pandemic.”

More than 45,000 people in the United States have died from COVID-19, while 22 million have applied for unemployment benefits since March. It’s that economic cost that has led some governors to follow Trump’s lead and start talking about allowing some shuttered businesses to reopen, including in Georgia, where many businesses — including gyms, bowling alleys and tattoo parlors — can do so starting Friday. Restaurants there can resume dine-in service next week. 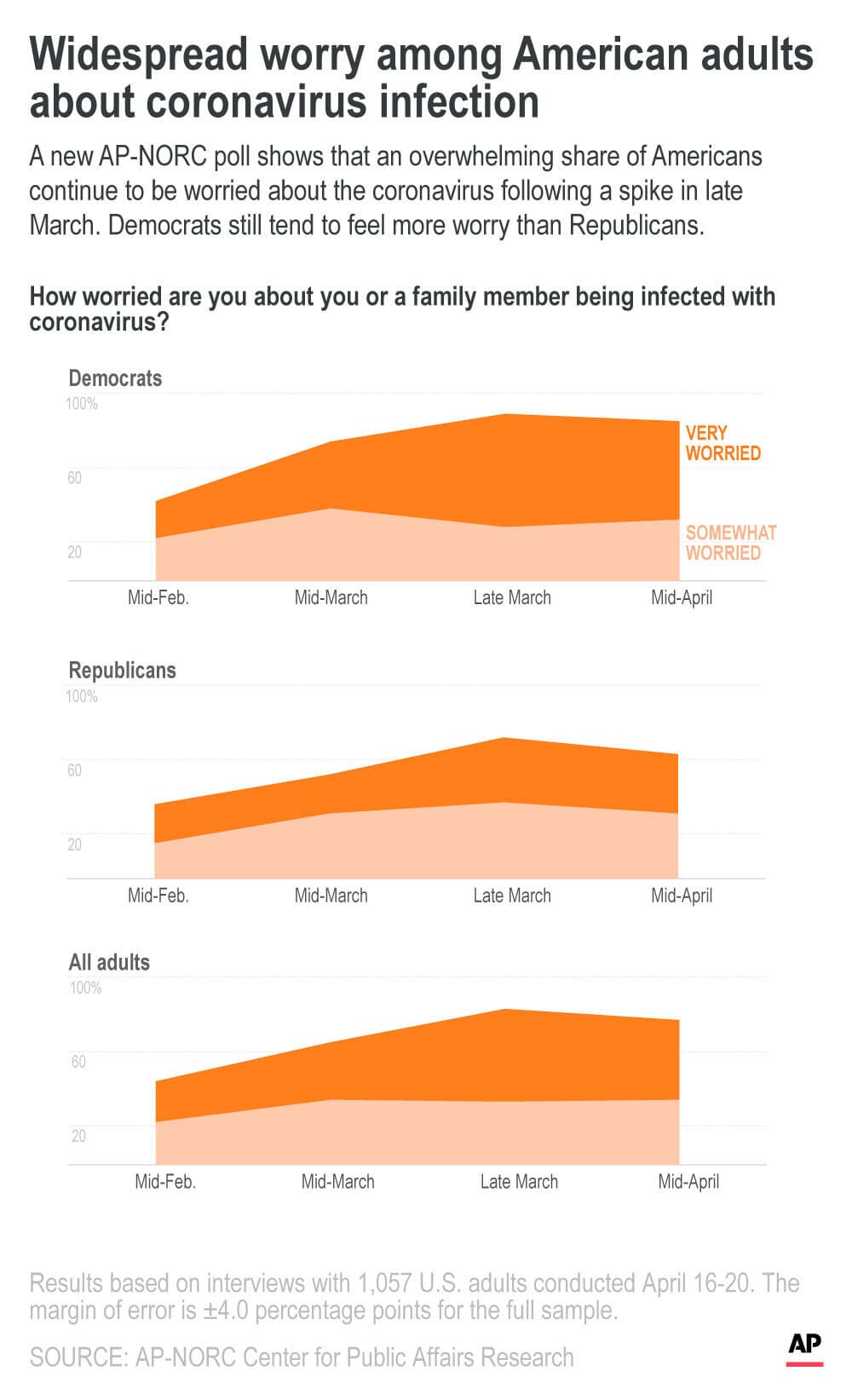 “If we try too hard to restart the economy prematurely, there will be waves of reinfection,” said 70-year-old retired medical equipment salesman Goble Floyd, of Bonita Springs, Florida. “I don’t think the economy or life will get back to normal until there’s a vaccine. It just seems this is so seriously contagious.”

The partisan differences are apparent. Georgia Gov. Brian Kemp is a Republican and unwavering Trump supporter. GOP lawmakers in Wisconsin filed suit Tuesday against the state’s Democratic governor after he ordered most nonessential businesses to remain closed until May 26.

The poll finds 59% of Republicans say it’s at least somewhat likely that their areas will be safe enough for reopening in just a few weeks, compared with 71% of Democrats who say it is unlikely. Still, even among Republicans, just 27% say that’s very likely.

“I haven’t met one person at the protests that disagrees with the fact that we need to self-quarantine until April 30,” said Matt Seely, a spokesman for the Michigan Conservative Coalition, which sponsored an automobile-based protest at the state’s capitol in Lansing last week. “Nobody wants to do the wrong thing. But the solution is not to stay in your home until the last case of COVID is gone.”