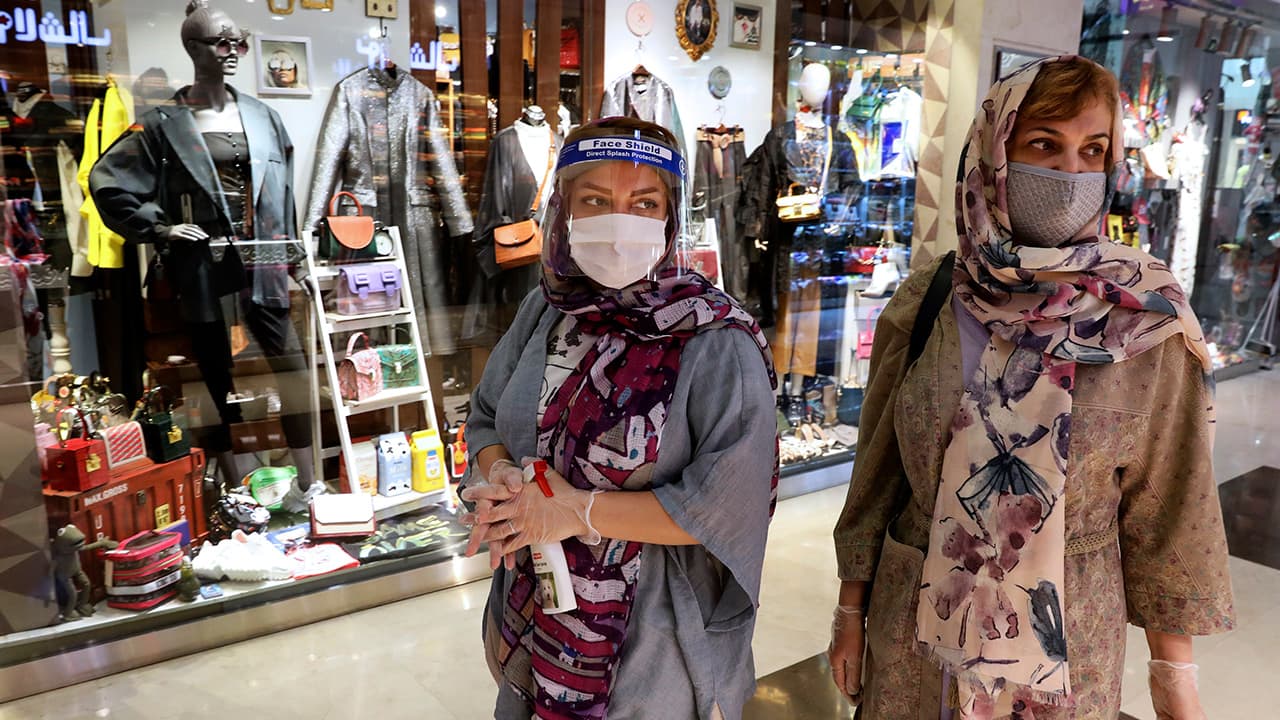 TEHRAN, Iran — Iran on Monday began opening intercity highways and major shopping centers to stimulate its sanctions-choked economy, gambling that it has brought under control its coronavirus outbreak — one of the worst in the world — even as some fear it could lead to a second wave of infections.

Stores from high-end malls to the meandering alleyways of Tehran’s historic Grand Bazaar opened doors, though the government limited their working hours until 6 p.m. Restaurants, gyms and other locations remain closed.

There are still lingering questions over Iran’s outbreak and the safety of those returning to work. Taxi drivers partitioned their seats from the customers with plastic shields and wore masks, having seen colleagues sickened and killed by the virus and the COVID-19 illness it causes.

“We, the taxi drivers, are at higher risk than anybody else because we are constantly in touch with people,” cab driver Nemat Hassanzadeh said. “We have no choice but to work because we cannot afford to sleep at home and not to work with these high prices.”

Iran is the region’s epicenter of the pandemic, though even Iran’s parliament suggests the death toll is nearly double that and overall cases remain vastly underreported. Iranian state TV quoted Health Ministry spokesman Kinoush Jahanpour as saying Monday that another 91 people died of the virus, bringing the country’s death toll to 5,209 amid over 83,500 confirmed cases.

Iran downplayed the crisis for weeks, even as top officials found themselves sick with the virus. The country’s civilian government, led by President Hassan Rouhani, has declined to implement the 24-hour lockdowns seen in other Mideast nations.

Iran’s Economy Suffered From Over 20% Unemployment Among Its Youth

Authorities have defended their response by outpointing the harsh economic impact such a lockdown would have. Iran already struggles under severe U.S. sanctions blocking the sale of its crude oil abroad, measures imposed after President Donald Trump unilaterally withdrew America from Tehran’s nuclear deal with world powers in 2018. That has led to a monthslong period of increasing tensions that have persisted through the pandemic.

The state-owned polling center ISPA found the virus has hurt the income of 50% of those surveyed, with 42% saying their businesses closed as a result. Of those polled this month, 13.5% said the outbreak left them jobless. The survey interviewed 1,563 people and offered no margin of error.

Iran’s economy suffered from over 20% unemployment among its youth and over 40% inflation even before the outbreak.

“I only pick passengers with masks. I cannot put my health at risk,” said Ali Qomi, who uses his personal car as a gypsy cab, like many other unemployed Iranians. “We poor people have no way except working to afford the increasing prices of our daily needs.”

That need has put drivers at risk. In Tehran, taxi officials say over a dozen cab drivers died from the virus and more than 300 contracted it. But distancing and government decisions have seen more people drive themselves, taking away from the cabbies’ possible fares. Meanwhile, some worry the plastic guard shield they put up may not be enough protection. 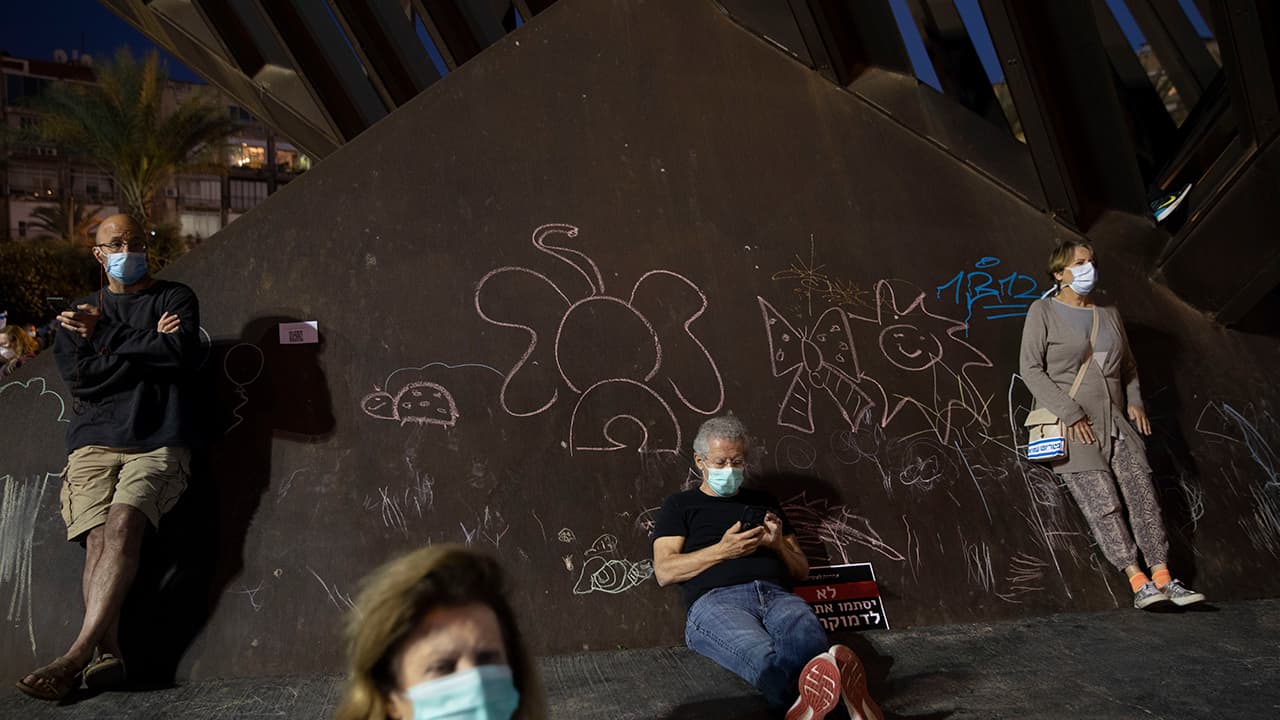 People wearing protective face masks amid concerns over the country’s coronavirus outbreak, take part in a protest against Prime Minister Benjamin Netanyahu in Tel Aviv, Israel, Sunday, April 19, 2020. More than 2,000 people took to the streets on Sunday, demonstrating against Prime Minister Benjamin Netanyahu’s attempts to form an “emergency” government with his chief rival and accusing him of using the coronavirus crisis to escape prosecution on corruption charges. (AP Photo/Oded Balilty)

Rouhani Said Some Sites Will Likely Open May 4

Ali Reza Zali, who is leading the campaign against the outbreak in Tehran, warned that re-opening of businesses may spread the infection, Iranian media reported.

“The significant point is that more commuting, especially through public transportation, adds to the possibility of contracting” the virus, he said.

Mosques and shrines remain closed after earlier being suspected of being a transmission source for the virus. That’s even as the holy Muslim fasting month of Ramadan is due to begin later this week.

Rouhani said some sites will likely open May 4, around 10 days into Ramadan. But Iran’s Supreme Leader Ayatollah Ali Khamenei, who has final say on all state matters, has already suggested that mass gatherings may be barred throughout Ramadan.

In Saudi Arabia, home to the holiest sites in Islam and ruled by the Sunni Al Saud family, a top council of clerics has called on people in the kingdom to pray at home throughout Ramadan. The council advised Muslims to conduct nightly prayers at home “in order to preserve the lives of people and grow closer to the Almighty God.”

Clerics in the United Arab Emirates issued a similar order, or fatwa, saying Ramadan evening prayers can be performed individually outside of mosques. They also said Eid prayers, which take place at the end of the holy month, could be performed from home if the current situation continues.

Related Story: Must Muslims Fast for Ramadan During COVID-19?

Shtayyeh said that factories could begin to work again, small businesses could reopen in areas without infections, and restaurants selling sweets and food for Ramadan could open for take-away orders. Shtayyeh also said that Palestinian laborers were banned from entering Israel or Israeli settlements to work.

The Palestinians have reported 314 cases of the coronavirus in the West Bank, with two deaths. Many of the cases have been traced to Palestinians who worked inside Israel, which is coping with a much larger outbreak.

Israel also announced Monday that the country’s septuagenarian Health Minister Yaakov Litzman has recovered after contracting the virus earlier this month. His infection forced top Israeli officials, including the prime minister, into quarantine.

Meanwhile in Afghanistan, at least 20 employees at the presidential palace have tested positive for COVID-19, according to a senior government official who spoke on condition of anonymity as he was not authorized to talk to journalists.

It wasn’t clear whether President Ashraf Ghani had been in contact with any of the employees or whether he had been tested himself. The presidential palace refused to comment.

Ghani reportedly has been self-isolating, although he still meets daily with some senior officials. A 70-year-old cancer survivor, Ghani is considered in the higher risk category. Afghanistan has reported over 1,000 cases of coronavirus and 36 deaths.