Many people hadn’t even heard the word until about a month ago. Now, “hydroxychloroquine” rolls off the tongue like a sharp-toothed barb to some and a possible “game-changer” to others.

“We are approaching this in a scientific way. We are randomizing patients early on to receive either (a) placebo or hydroxychloroquine. This is probably the only way that we will be able to tell, hopefully, whether it’s effective or not.” — Dr. Eyad Almasri, UCSF-Fresno

The scientific community is searching for a definitive answer to the following question: Will it work against COVID-19?

And the Fresno medical community is jumping into a trial next week.

The politics that Almasri wants to keep his social distance from are well known.

President Donald Trump and his administration are promoting the anti-malarial drug hydroxychloroquine and it’s not officially approved for fighting the new coronavirus. Scientists say more testing is needed before it’s proven safe and effective against COVID-19.

UCSF-Fresno was cleared to participate in a national randomized double-blind, placebo-controlled study to look at the efficacy and safety of hydroxychloroquine. It is funded by the National Institutes of Health. 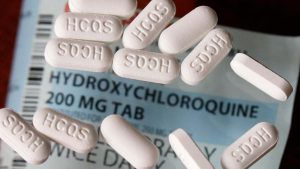 “We are approaching this in a scientific way. We are randomizing patients early on to receive either (a) placebo or hydroxychloroquine,” Almasri said.

Not even the doctors will know who is getting the drug versus those only receiving a placebo.

“This is probably the only way that we will be able to tell, hopefully, whether it’s effective or not,” Almasri said.

Medical officials warn that it’s dangerous to be hawking unproven remedies, and even Trump’s own experts have cautioned against it.

The American Medical Association’s president, Dr. Patrice Harris, said she personally would not prescribe the drug for a coronavirus patient. She believes the risks of severe side effects are “great and too significant to downplay” without large studies showing the drug is safe and effective for such use.

The Drug and Side Effects

Hydroxychloroquine is officially approved for treating malaria, rheumatoid arthritis, and lupus. Small, preliminary studies have suggested it might help prevent the new coronavirus from entering cells and possibly help patients clear the virus sooner. But those studies have shown mixed results.

The drug has major potential side effects, especially for the heart, and National Institutes of Health infectious disease expert Dr. Anthony Fauci has said more testing is needed before it’s clear that the drug works against the virus and is safe for such use.

Some limited studies have been conducted on the use of hydroxychloroquine and antibiotic azithromycin in concert to treat COVID-19, but they have not included critical control groups that scientists use to validate the conclusions.

UCSF-Fresno is part of what’s called the California Consortium based in San Francisco. Stanford, UCSF’s main campus, UC Davis, UCLA, and UCSF-Fresno comprise the consortium. The group’s universities and hospitals are all conducting the same hydroxychloroquine trial.