WASHINGTON — President Donald Trump gave governors a road map Thursday for recovering from the economic pain of the coronavirus pandemic, laying out “a phased and deliberate approach” to restoring normal activity in places that have strong testing and are seeing a decrease in COVID-19 cases.

“You’re going to call your own shots. We’re going to be standing alongside of you.” — President Donald Trump

He added, “This is a gradual process.”

The new guidelines are aimed at easing restrictions in areas with low transmission of the coronavirus, while holding the line in harder-hit locations. They make clear that the return to normalcy will be a far longer process than Trump initially envisioned, with federal officials warning that some social distancing measures may need to remain in place through the end of the year to prevent a new outbreak. And they largely reinforce plans already in the works by governors, who have primary responsibility for public health in their states.

“You’re going to call your own shots,” Trump told the governors Thursday afternoon in a conference call, according to an audio recording obtained by The Associated Press. “We’re going to be standing alongside of you.”

Places with declining infections and strong testing would begin a three-phase gradual reopening of businesses and schools.

In phase one, for instance, the plan recommends strict social distancing for all people in public. Gatherings larger than 10 people are to be avoided and nonessential travel is discouraged.

In phase two, people are encouraged to maximize social distancing and limit gatherings to no more than 50 people unless precautionary measures are taken. Travel could resume.

Phase three envisions a return to normalcy for most Americans, with a focus on identification and isolation of any new infections. 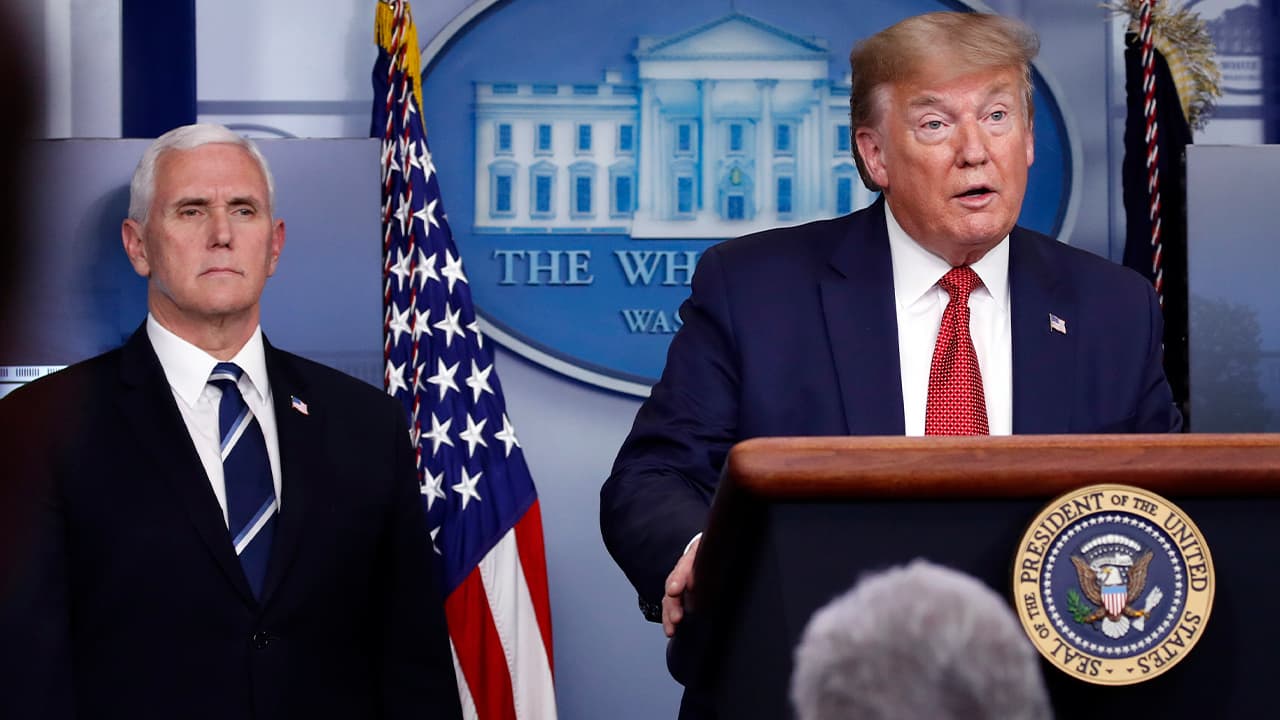 Trump said recent trends in some states were so positive that they could almost immediately begin taking the steps laid out in phase one.

“They will be able to go literally tomorrow,” Trump said.

The guidelines recommend that states pass checkpoints that look at new cases, testing and surveillance data over the prior 14 days before advancing from one phase to another.

Governors of both parties made clear they will move at their own pace.

“We’re days, maybe weeks away from the starting line and then you have to have 14 days of declining cases, of declining symptoms and hospital capacity that exists in case you have a rebound,” he said.

West Virginia Gov. Jim Justice, a Trump ally, cautiously floated the idea of reopening parts of the state, but said testing capacity and contact tracing would need to be considerably ramped up before restrictions could be safely lifted.

“All would be forgotten very quickly if we moved into a stage quicker than we should, and then we got into a situation where we had people dying like flies,” Justice told reporters.

At the earliest, the guidelines suggest, some parts of the country could see a resumption in normal commerce and social gatherings after a month of evaluating whether easing up on restrictions has led to a resurgence in virus cases. In other parts of the country, or if virus cases pick up, it could be substantially longer.

In briefing governors on the plan, Trump said they were going to be responsible for deciding when it is safe to lift restrictions in their states. Just days before, he had drawn swift pushback for claiming he had absolute authority to determine how and when states reopen.

The Federal Government Envisions a Gradual Recovery From the Virus

“We have a very large number of states that want to get going and they’re in very good shape,” Trump said. “That’s good with us, frankly.”

The guidelines also include general recommendations to businesses as they plan for potential reopenings, suggesting temperature-taking, rapid COVID-19 testing and widespread disinfection efforts in workplaces.

Two in three Americans expressed concerns that restrictions meant to slow the spread of the virus would be eased too quickly, according to a Pew Research Center survey released Thursday. More than 30,000 people in the United States have died from the virus.

Those most susceptible to the respiratory disease are advised to remain sheltered in place until their area enters the final phase — and even then are encouraged to take precautions to avoid close contact with other people.

Governors, for their part, have been moving ahead with their own plans for how to safely revive normal activity. Seven Midwestern governors announced Thursday they will coordinate on reopening their economies. Similar pacts were announced earlier in the week in the West and Northeast.

Two in three Americans expressed concerns that restrictions meant to slow the spread of the virus would be eased too quickly, according to a Pew Research Center survey released Thursday. More than 30,000 people in the United States have died from the virus.

Trump also held conference calls Thursday with lawmakers he named to a new congressional advisory task force on reviving the economy. The economic costs were clear in new federal data showing that at least 22 million Americans have been thrown out of work in the last month. But the legislators repeatedly urged the president not to sacrifice public health by moving too quickly.

“My highest priority on this task force will be to ensure the federal government’s efforts to reopen our economy are bipartisan, data-driven, and based on the expertise of public health professionals,” said Democratic Sen. Mark Warner of Virginia.

The federal government envisions a gradual recovery from the virus, in which disruptive mitigation measures may be needed in some places at least until a vaccine is available — a milestone unlikely to be reached until sometime next year.

“It’s not going to immediately be a situation where we have stadiums full of people,” said Housing and Urban Development Secretary Ben Carson on Thursday. “We’re Americans. We will adapt,” he added. 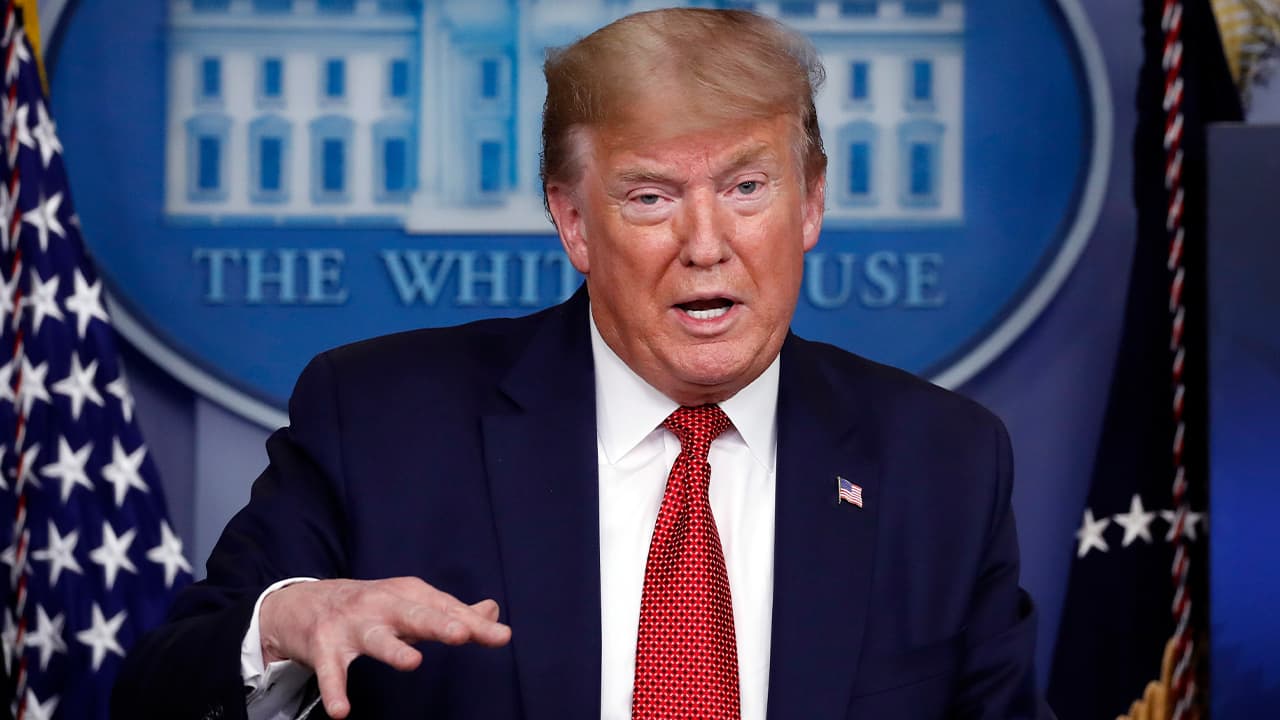 Trump on Thursday claimed the U.S. has “built the most advanced and robust testing anywhere in the world.” But even people close to him warned more would be necessary.

“We are struggling with testing at a large scale,” South Carolina Sen. Lindsey Graham told ABC’s “The View.” “You really can’t go back to work until we have more tests.”

“We’re not going to be able to really make significant changes in the three phases the president’s talking about until we’re able to test much more broadly,” Biden said on CNN.

There was also concern that the White House was taking too rosy a view on trends in the U.S.

“I would not declare a peak almost anywhere in the U.S. yet,” said Marc Lipsitch, a Harvard epidemiology professor who is director of the university’s Center for Communicable Disease Dynamics. He recommended “working to enhance surveillance and testing so if we do hit a peak, it will be possible to identify it with greater certainty.”

But some of Trump’s conservative allies, like economist Stephen Moore, have encouraged him to act swiftly, warning of “a mini Great Depression if we keep the economy shut down.”

“That is a catastrophic outcome for our country. Period,” Moore said he advised the president.

A big testing ground for Trump’s road map could be Texas, where Republican Gov. Greg Abbott, who has stuck close to federal guidance throughout the crisis, will lay out his reopening plan Friday. Abbott has said the process will be gradual, but he is facing pressure from conservative lawmakers to get Texas back to work.

The White House proposal presented Thursday is different from what the Centers for Disease Control and Prevention recommended last week, according to a draft of the recommendation obtained by The Associated Press. The CDC talked about using more specific criteria and in many cases looking for improvement over longer periods of time before easing restrictions in high-transmission areas. Examples include wanting to see sustained reductions over 30 days in positive tests for coronavirus, and sustained reductions over 15 days in numbers of coronavirus deaths.