The Kern County Sheriff’s Office arrested one of its own in connection with an alleged criminal conspiracy at the Lerdo pre-trial jail.

The office announced the April 9 arrest of sheriff’s aide Erik Belmontes, 26, on Tuesday.

Belmontes faces multiple charges. They include bringing illegal drugs and a cellphone into the jail, drug possession for the purpose of sales, conspiracy to commit a felony, and participation in a criminal street gang.

Belmontes was placed on administrative leave and his bail set at $110,000.

Deputies also arrested 13 inmates after finding contraband, including drugs, in the jail as part of an investigation that began March 9, the sheriff’s office said. 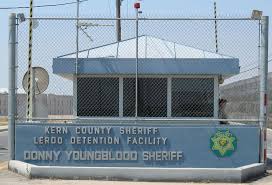 Inmates Gary Pierson, 39, and Deshaun Nicholson, 30, are suspected to be co-conspirators, according to Kern County authorities.

As the investigation is ongoing, anyone with information is asked to call the sheriff’s office, 661 861-3110.

The Lerdo Detention Facility is north of Bakersfield and can hold more than 1,200 inmates.