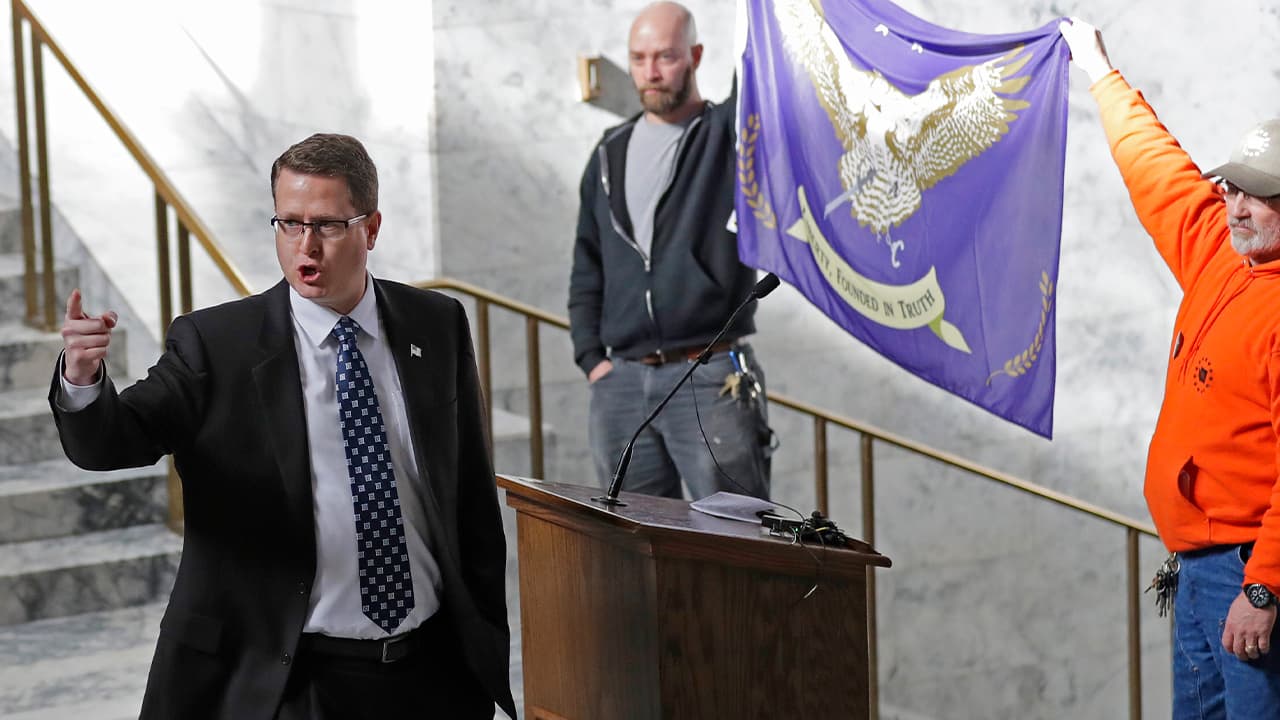 SPOKANE, Wash. — In deeply conservative eastern Washington state, a prominent state lawmaker kicked out of his Republican Party caucus labels the coronavirus as a foreign bio-weapon, accuses Marxists of using the pandemic to advance totalitarianism and rails against lockdown restrictions imposed by the Democratic governor.

A California teleconference last week to consider sport fishing limits in rural areas unprepared to handle influxes of anglers descended into chaos — with callers branding state officials as “fascists” and declaring it was time to “make fishing great again.”

A California teleconference last week to consider sport fishing limits in rural areas unprepared to handle influxes of anglers descended into chaos — with callers branding state officials as “fascists” and declaring it was time to “make fishing great again.”

Across the U.S., elected officials from Pennsylvania to Oklahoma suspicious of big government and outraged with orders to close churches, gun stores and other businesses deemed non-essential insist that the public health response is being used as an excuse to trample constitutional rights.

The shutdowns reinforce long-held beliefs by some that governments would eventually use a national emergency to limit civil liberties and the vitriol is particularly strong across the pine forests of eastern Washington state — where conservative Rep. Matt Shea is a co-founder of the Coalition of Western States, a loose federation of politicians suspicious of big government, plus militia supporters.

Its goal is to “stop unconstitutional actions against United States citizens,″ according to a December report into Shea’s activities paid for by the Washington state House issued just before his own caucus exiled him.

After Washington state Gov. Jay Inslee issued the earliest U.S. mandatory closing of schools and businesses, Shea questioned whether Inslee would use the state’s National Guard to enforce his orders and if he would force inoculation of residents after a coronavirus vaccine becomes available.

”Quarantine is only supposed to be for sick people not mandatory for healthy law abiding people,” Shea wrote on Facebook. “Otherwise constitutionally and legally that starts creeping into martial law territory.”

Joining Shea in the vast expanse of eastern Washington, hundreds of miles and political light years away from ultra liberal Seattle, was Republican gubernatorial candidate Loren Culp, who wants to deny Inslee a third term. Culp is the police chief of the town of Republic and author of the book “American Cop: Upholding the Constitution and Defending Your Right to Bear Arms,” praised by rocker Ted Nugent.

“If I choose to peacefully assemble, go to Church, go to a gun shop, take my family fishing, open my business, enjoy the outdoors, or exercise any of my constitutional rights, I should not be restricted from doing so by a would-be dictator,” Culp told supporters during a recent conference call.

Shea’s efforts were lambasted by the Southern Poverty Law Center, which said in a statement that he was promoting fear mongering and providing “legitimacy for a network of extremists” in western U.S. states “at a time when hundreds of Washingtonians, and thousands more Americans, are dying from coronavirus”

Wheeler’s letter questioned the reliability of World Health Organization coronavirus information and said “now it is time to reinstate our Constitution.”

“You can request those that are sick to stay home, but, at the same time, you must release the rest of us to go on with our normal business,” Wheeler wrote.

She called the governmental response to the virus “a way to chip away at the foundations of our Constitution to push a global, socialistic agenda while in the midst of a national emergency.”

“You were not elected to be our master or dictator but a servant leader in the executive branch,’’ Metcalfe wrote. “You have no authority to imprison any citizen in their home.’’

“Government itself is going to be causing far more damage to America by its reaction to coronavirus than the coronavirus itself,” Becker told the conservative One America News Network.

More than 500 participants jammed the teleconference after a group of conservative politicians, sheriffs and media outlets told social media followers that the administration of Gov. Gavin Newsom, a Democrat, was planning the statewide ban, the Sacramento Bee reported.

Even mostly liberal California saw a rebellious sign last week, when angry anglers disrupted a teleconference with state regulators who had planned to discuss a potential limited ban on freshwater sportfishing in several rural countries. Many callers mistakenly thought a statewide ban might be imposed.

Officials ended up canceling the Fish and Game Commission meeting to decide whether emergency powers should be granted to a governor’s Department of Fish and Wildlife appointee because local officials feared visiting anglers could spread the virus.

More than 500 participants jammed the teleconference after a group of conservative politicians, sheriffs and media outlets told social media followers that the administration of Gov. Gavin Newsom, a Democrat, was planning the statewide ban, the Sacramento Bee reported.

After the teleconference, Republican California U.S. Rep. Doug LaMalfa wrote on Facebook that “using this quarantine period to advance government control that would never sell otherwise is a breach of trust,” the Bee reported.

He accused the politicians of “performative drama and exaggeration that puts their constituents at more risk.”