WASHINGTON — A member of the crew of the coronavirus-infected USS Theodore Roosevelt died Monday of complications related to the disease, the Navy said, just weeks after the aircraft carrier’s captain was fired for pressing his concern that the Navy had done too little to safeguard his crew.

The sailor, whose name and other identifying information were not publicly released pending notification of relatives, had tested positive for coronavirus on March 30 and was taken off the ship and placed in “isolation housing” along with four other sailors at the U.S. Navy base on Guam. On April 9, he was found unresponsive during a medical check and was moved to a local hospital’s intensive care unit.

Over the weekend, four additional Roosevelt crew members were admitted to the hospital for monitoring of coronavirus symptoms, the Navy said. All are in stable condition and none are in intensive care or on ventilators.

The death Monday was the first among the crew of approximately 4,860, of which 585 had tested positive for coronavirus as of Monday. A little over 4,000 crew members have been moved ashore. A number have been kept aboard to attend to the enormous ship’s nuclear reactors and other sensitive systems. 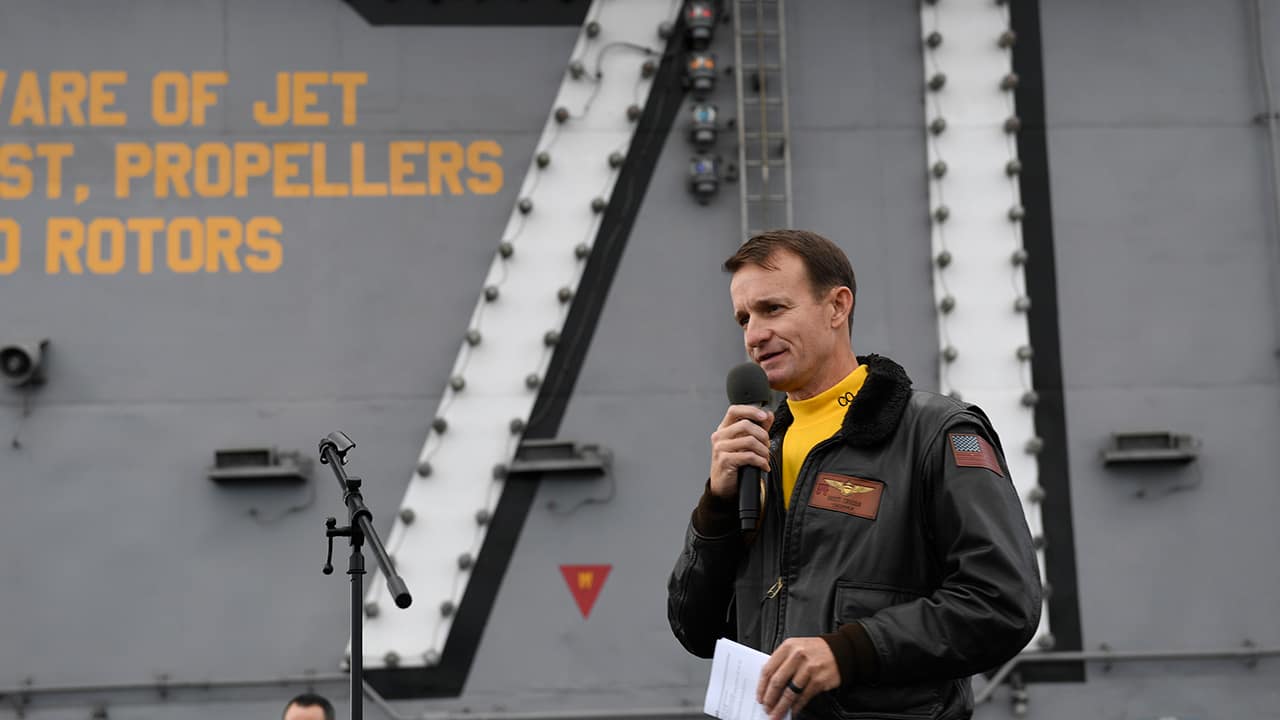 In this Nov. 15, 2029, photo U.S. Navy Capt. Brett Crozier, commanding officer of the aircraft carrier USS Theodore Roosevelt (CVN 71), addresses the crew during an all-hands call on the ship’s flight deck while conducting routine operations in the Eastern Pacific Ocean. U.S. defense leaders are backing the Navy’s decision to fire the ship captain who sought help for his coronavirus-stricken aircraft carrier, even as videos showed his sailors cheering him as he walked off the vessel. Videos went viral on social media Friday, April 3, 2020, showing hundreds of sailors gathered on the ship chanting and applauding Navy Capt. Brett Crozier as he walked down the ramp, turned, saluted, waved and got into a waiting car. (U.S. Navy Photo by Mass Communication Specialist 3rd Class Nicholas Huynh via AP)

The Roosevelt has been in a coronavirus crisis that prompted the Navy’s civilian leader, Thomas Modly, to fire the ship’s captain on April 2. Five days later, after having flown to the ship and delivered a speech in which he insulted the skipper, Capt. Brett E. Crozier, and criticized the crew for supporting Crozier, Modly resigned.

“We are not at war. Sailors do not need to die. If we do not act now, we are failing to properly take care of our most trusted asset – our sailors.” — U.S. Navy Capt. Brett Crozier, commanding officer of the aircraft carrier USS Theodore Roosevelt (CVN 71)

Modly said he felt compelled to remove Crozier from command because he had distributed too widely via email a letter in which he called for more urgent Navy action to prevent a deeper coronavirus crisis aboard his ship. Crozier’s words angered Modly but were seen by others as necessary.

“We are not at war. Sailors do not need to die. If we do not act now, we are failing to properly take care of our most trusted asset – our sailors,” Crozier wrote March 31. The letter appeared a short time later in the San Francisco Chronicle and other news media. Modly said the letter was inappropriate and that Crozier had failed to consult sufficiently with his immediate superior before writing it.

Navy officials have not ruled out the possibility of Crozier being reinstated.

Adm. Robert Burke, the Navy’s second-ranking admiral, has been conducting an investigation of the Roosevelt’s coronavirus outbreak and related events, and the results could be presented as early as this week. 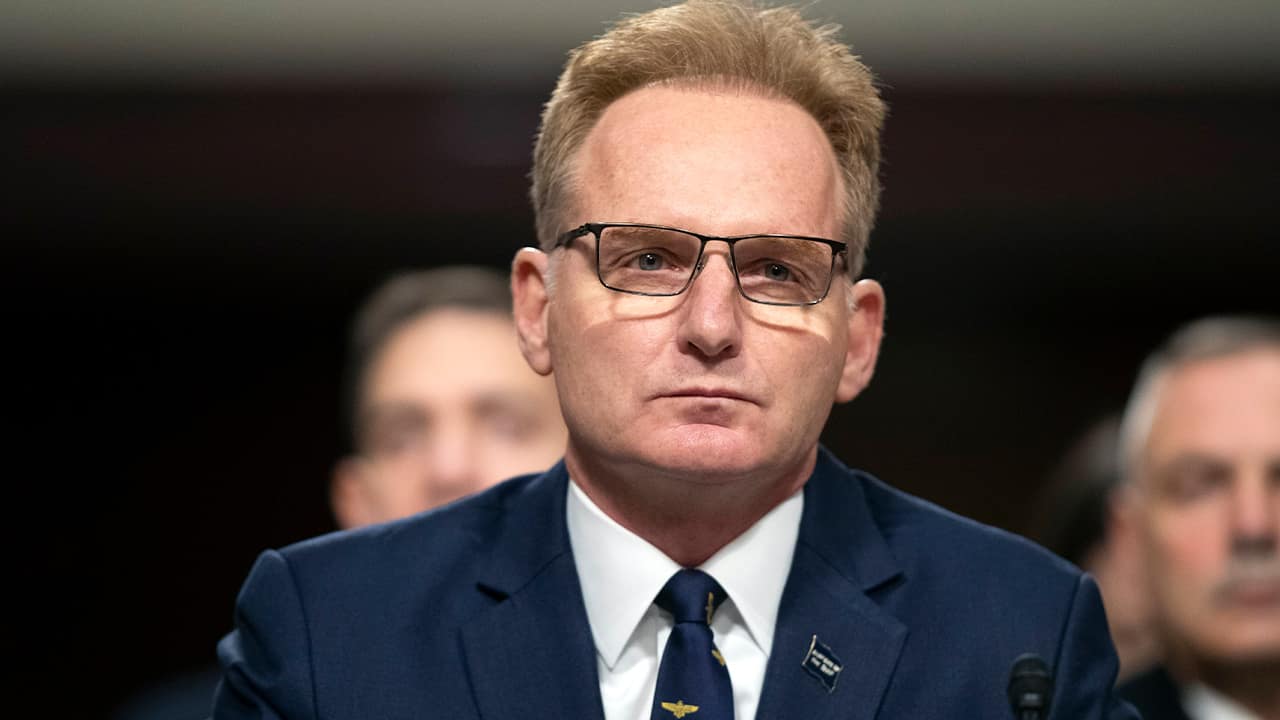 FILE – In this Dec. 3, 2019, file photo, acting Navy Secretary Thomas Modly testifies during a hearing of the Senate Armed Services Committee about about ongoing reports of substandard housing conditions in Washington, on Capitol Hill. Modly says the captain of the COVID-stricken aircraft carrier who was fired last week had betrayed his service and may have been “too naive or too stupid” to be commanding officer of the ship. Officials are confirming that Modly made the comments Sunday, April 5, 2020, to the ship’s crew in Guam. (AP Photo/Alex Brandon, File)

The Biggest Problem Is the Inability to Test Enough People Quickly

Pentagon leaders anticipate that the coronavirus may strike more Navy ships at sea.

Last Thursday, Air Force Gen. John Hyten, vice chairman of the Joint Chiefs of Staff, noted that ships with large numbers of sailors aboard operating in close quarters are vulnerable to an outbreak, although the Roosevelt is the only one so far to have reported coronavirus cases while deployed at sea.

“It’s not a good idea to think that the Teddy Roosevelt is a one-of-a-kind issue,” Hyten told a Pentagon news conference. “We have too many ships at sea. … To think that it will never happen again is not a good way to plan.”

The Navy’s top officer, meanwhile, said last week that the biggest problem is the inability to test enough people quickly, including those aboard the USS Nimitz, the next U.S.-based aircraft carrier due to deploy out to sea.

“The challenge that we have now, is having that type of capability where we can test in volume and at speed,” Adm. Mike Gilday said Thursday. “I really don’t have a good estimate right now on when that testing capability might be available in the kinds of quantities we would like to see.”

He said sailors on the USS Nimitz, which is in port preparing for a deployment, will have all movement restricted for two weeks before the ship leaves.