No Halt to Culture Wars During Coronavirus Outbreak 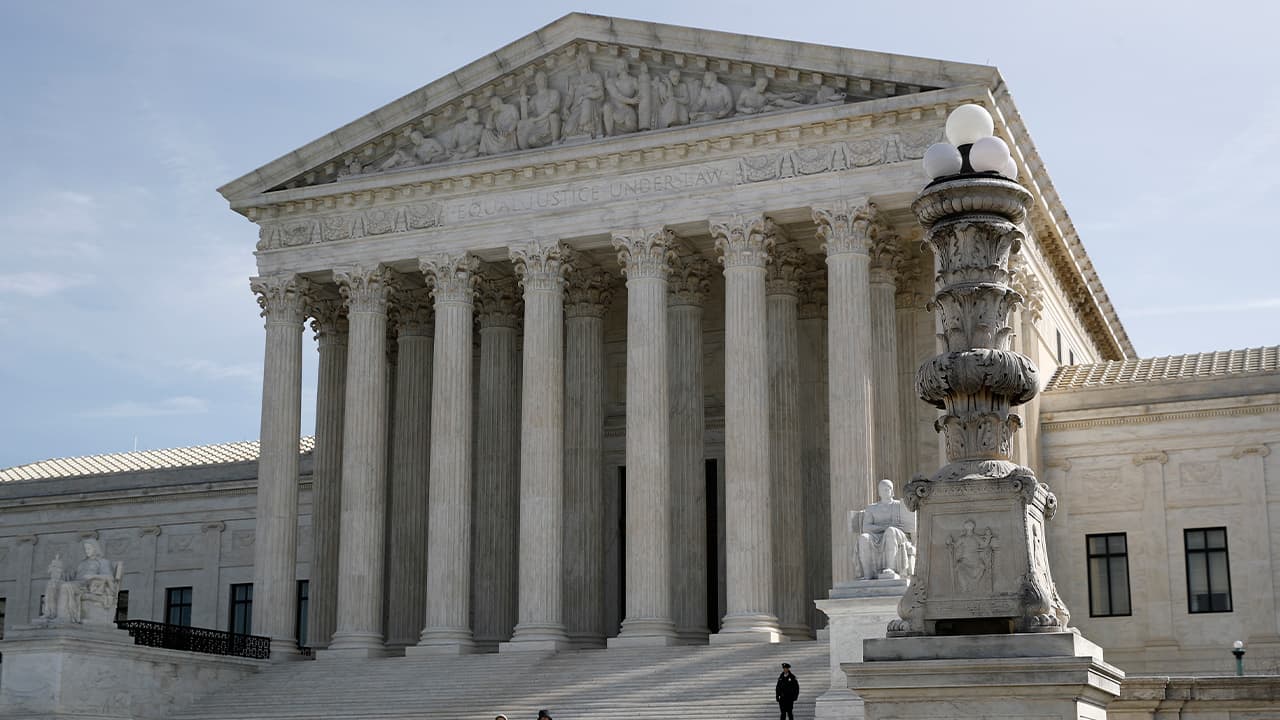 WASHINGTON — A partisan fight over voting in Wisconsin was the first issue linked to the coronavirus to make it to the Supreme Court. Efforts to limit abortion during the pandemic could eventually land in the justices’ hands. Disputes over guns and religious freedom also are popping up around the country.

The virus outbreak has put much of American life on hold, but the combatants in the nation’s culture wars aren’t taking a cease-fire.

And in a country deeply divided over politics, some liberals are accusing conservatives of using this crisis to advance long-held goals, especially in the areas of access to abortion and the ballot box. Conservatives have complained about restrictions on church services and gun shops.

“We see the right as being very opportunistic to advance their agenda,” said Marge Baker, executive vice president of the liberal People for the American Way.

Tim Schmidt, founder and president of the gun-rights U.S. Concealed Carry Association, called restrictions on gun sales “a knee-jerk response to something we don’t quite understand. I hope and pray it doesn’t happen but that’s what I fear,” he said in a recent online forum.

The clash over Tuesday’s election in Wisconsin is just one fight sparked by the coronavirus. Ultimately, conservative majorities on both the high court and Wisconsin Supreme Court broke with more liberal colleagues to reject Democratic efforts to delay the vote and extend absentee balloting. The rulings signal an approaching season of bitter election-related litigation, said University of California at Irvine law professor Richard Hasen. 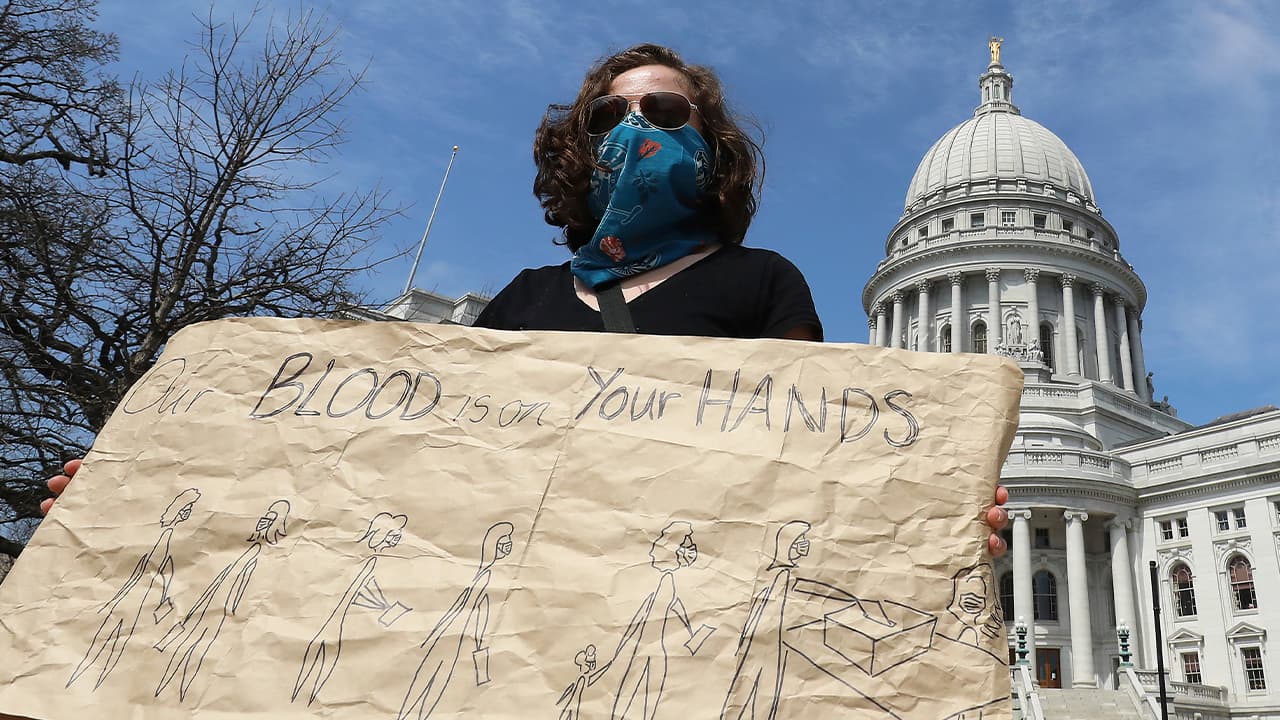 Maya Banks, of Madison, Wis., expresses her opposition to decisions by the state’s legislature and Supreme Court to proceed with a the state’s primary election while holding a sign outside the Wisconsin State Capitol building in Madison, Tuesday, April 7, 2020. (John Hart/Wisconsin State Journal via AP)

More Fights Over Elections May Be Ahead

“It is a very bad sign for November that the Court could not come together and find some form of compromise here in the midst of a global pandemic unlike anything we have seen in our lifetimes,” Hasen wrote about the U.S. Supreme Court justices on his Election Law blog.

“And it does not look like the courts are going to be able to do any better than the politicians in finding common ground on election principles,” he added.

Already, presumptive Democratic presidential nominee Joe Biden has said the country should be looking “to all-mail ballots across the board” because of the pandemic. But President Donald Trump has weighed in strongly against voting by mail, even though he himself casts absentee ballots and Republicans have often favored mail-in ballots especially for older people.

More fights over elections may be ahead, but the pandemic has already led to clashes in multiple states over abortion access. In Republican-led Alabama, Iowa, Ohio, Oklahoma and Texas, governors sought to prohibit almost all abortions by classifying them as elective procedures that should be put off during the virus outbreak.

Those efforts have, so far, been mostly blocked. In Iowa, the American Civil Liberties Union and the state reached an agreement that allows women to obtain “essential” surgical abortions. Federal court rulings have allowed abortions to continue in Alabama, Ohio and Oklahoma.

But not so in Texas, where the 5th U.S. Circuit Court of Appeals in New Orleans held 2-1 Tuesday that the state’s restrictions on abortions could remain in place during the pandemic. U.S. Circuit Judge Kyle Duncan, a Trump appointee, wrote for the court that the epidemic justified “emergency measures that curtail constitutional rights so long as the measures have at least some ‘real or substantial relation’ to the public health crisis.”

The ruling drew a blistering dissent from Judge James Dennis, a Bill Clinton appointee, who said that results in cases involving abortion at the conservative 5th Circuit don’t stem from “the law or facts, but because of the subject matter.”

Abortion rights groups on Wednesday went back to a lower court in an effort to resume abortions, and the case could still eventually reach the Supreme Court. Nancy Northup, president of the Center for Reproductive Rights, said Texas “has been trying to end abortion for decades and they are exploiting this pandemic to achieve that goal.”

Abortion clinics aren’t the only places that states have sought to close during the pandemic. Gun stores, too, have been targeted. Most states have deemed gun sellers essential businesses allowed to remain open during the emergency. But three states — Massachusetts, New Mexico and Washington — forced those businesses to close.

Gun rights groups have gone to court to pressure New Jersey’s Democratic governor, Phil Murphy, and local officials in North Carolina to reverse course on gun restrictions. Other lawsuits are pending in California.

Joe Bartozzi, president and CEO of the National Sports Shooting Foundation, said closing the stores is the wrong answer. “You don’t want to, in a time of crisis, be suspending civil liberties,” Bartozzi said.

Gun-control advocates said the National Rifle Association and allied groups were using the pandemic to advance their cause. “This is part of their playbook for many years which is to foment fear during a time of crisis,” said Shannon Watts, founder of the gun-control group Moms Demand Action.

Some churches also have become embroiled in fights about whether they can stay open. Some states’ stay-at-home orders have specifically exempted some level of religious activity, but that hasn’t necessarily prevented clashes.

“It appears to be out of line and extreme and clearly in violation, a blatant violation, of our fundamental rights,” said state Senate President Susan Wagle of Wichita, an abortion opponent. Wagle questioned why abortion clinics remained open, while churches faced restrictions.

“We believe the government’s power stops at the church doors,” said Jared Woodfill, a lawyer who represents the pastors and said he’s working on three other pandemic-related church lawsuits in Texas, even though Texas Gov. Greg Abbott’s executive order deems religious services essential.

He said it’s ironic that Wisconsin held elections. “You had elections but you can’t have church?” he asked.

Chase Strangio, an American Civil Liberties Union lawyer, took to Twitter to offer a different take on the same set of facts.

For McConnell, Virus Carries Echo of His Boyhood Polio