WASHINGTON — Mitch McConnell’s earliest childhood memory is the day he left the polio treatment center at Warm Springs, Georgia, for the last time.

He was just a toddler in 1944, when his father was deployed to World War II, his mother relocated the family to her sister’s home in rural Alabama and he came down with flu-like symptoms. While he eventually recovered, his left leg did not. It was paralyzed. 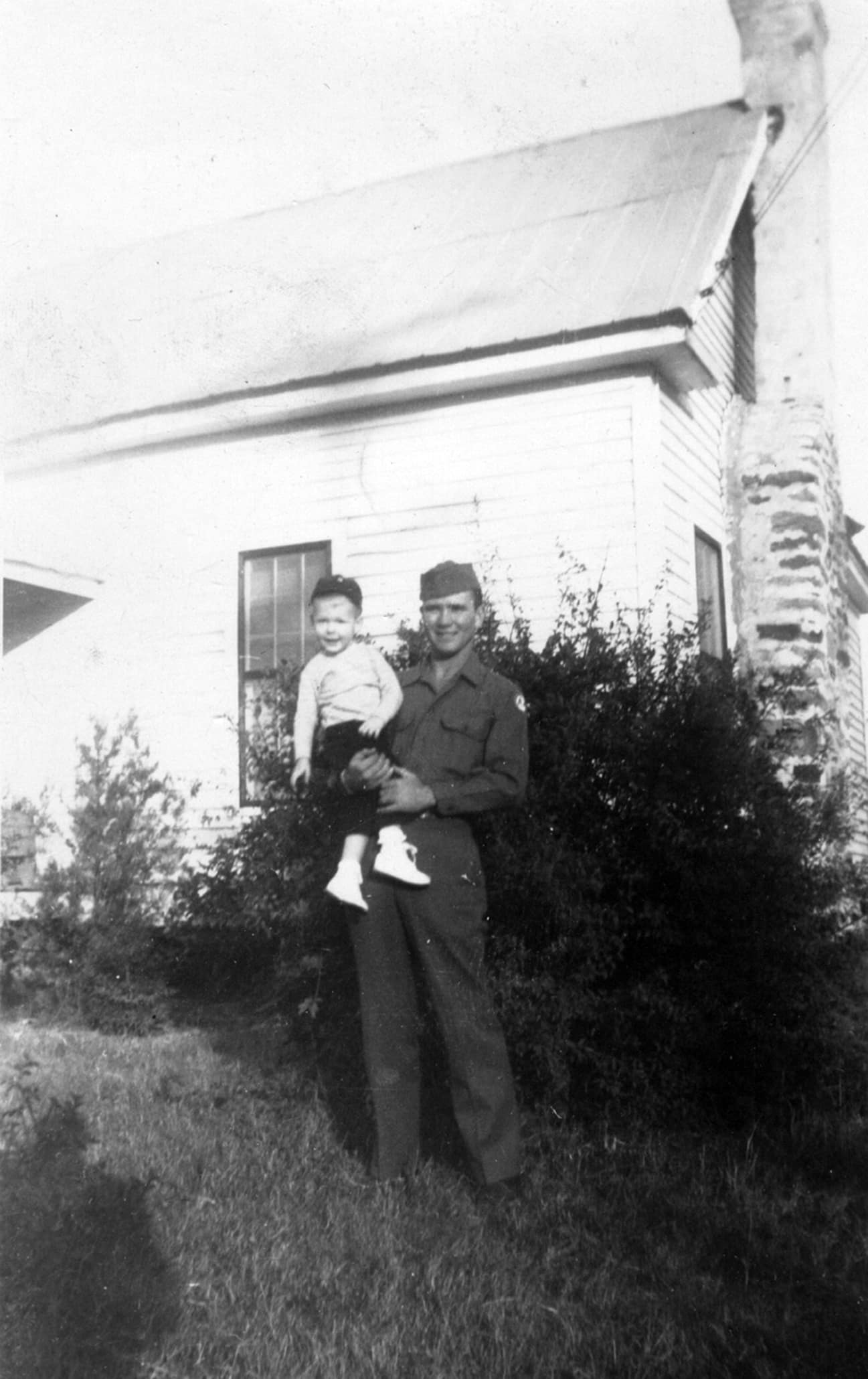 Mitch McConnell is held by his father Addison Mitchell McConnell in front of a relative’s house in Five Points, Ala, in 1944, shortly before he was stricken with polio. (McConnell Center at the University of Louisville via AP)

Two long years later, after shuttling young McConnell to and from the center where then-President Franklin Roosevelt received polio care, his mother was told that day that her young son would be able walk into his life without a leg brace.

She immediately took the 4-year-old shopping for a new pair of shoes.

More than 70 years later, Senate Majority Leader McConnell walked into the U.S. Senate to pass a sweeping coronavirus rescue package — and shutter the chamber for the forseeable future — as another dangerous flu-like virus fills the nation with anxiety, quarantines and unimaginable disruptions to American life.

“Why does this current pandemic remind me of that? I think No. 1 is the fear,” said McConnell in an interview with The Associated Press.

“And the uncertainty you have when there’s no pathway forward on either treatment or a vaccine and that was the situation largely in polio before 1954.”

The two crises now bookend McConnell’s years, making the Kentucky Republican an unexpected voice of personal experience and reflection in what he calls these “eerie” times.

As a Toddler, McConnell Was Taught to Stay Off His Feet

It’s an unusual role for the famously guarded leader, who rarely says more when less will do, and relishes an image as a sly political tactician. But as more than 16,000 people in the U.S. have died from the coronavirus, the echoes are all too familiar. So too is the solution, as he sees it, to care for the nation’s sick and produce treatments, and an eventual vaccine.

“There’s hope that we’re going to get on top of this disease,” he said, “within a year, year and a half.”

Polio ignited a dreadful fear across the U.S. in those years, especially in summertime. The virus particularly struck children, forcing swift closures of schools and playgrounds and, in the sweltering heat, swimming pools. Towns shuttered, families isolated. Thousands died, others were hospitalized and some left permanently paralyzed or with post-polio syndrome. The Salk vaccine was still years away.

“It was a scary virus,” said Stacey D. Stewart, president & CEO of March of Dimes, which started as FDR’s National Foundation for Infantile Paralysis but quickly took on the name that reflected the public service call for Americans to donate their dimes for a polio solution.

“You didn’t understand how you got it,” she said, and because it impacted so many young people, for “so many parents, what’s worse for a parent than having your child get sick?”

As a toddler, McConnell was taught to stay off his feet. His mother understood if he tried to walk too soon after the illness he might require a leg brace for the rest of his life. She began taking him on the hour drive each way to Warm Springs where Roosevelt’s condition was a warning sign to Americans the disease spared no one. Back home, she would would run through the physical therapy with her son “like a drill sergeant,” he said.

He Couldn’t Run as Fast as the Other Kids

McConnell doesn’t remember much from those earliest days. Much of it he knows from his mother’s retelling and his own reading of books of the era.

But he does remember what happened in the years after she bought him those saddle oxfords on their last trip home from Warm Springs. 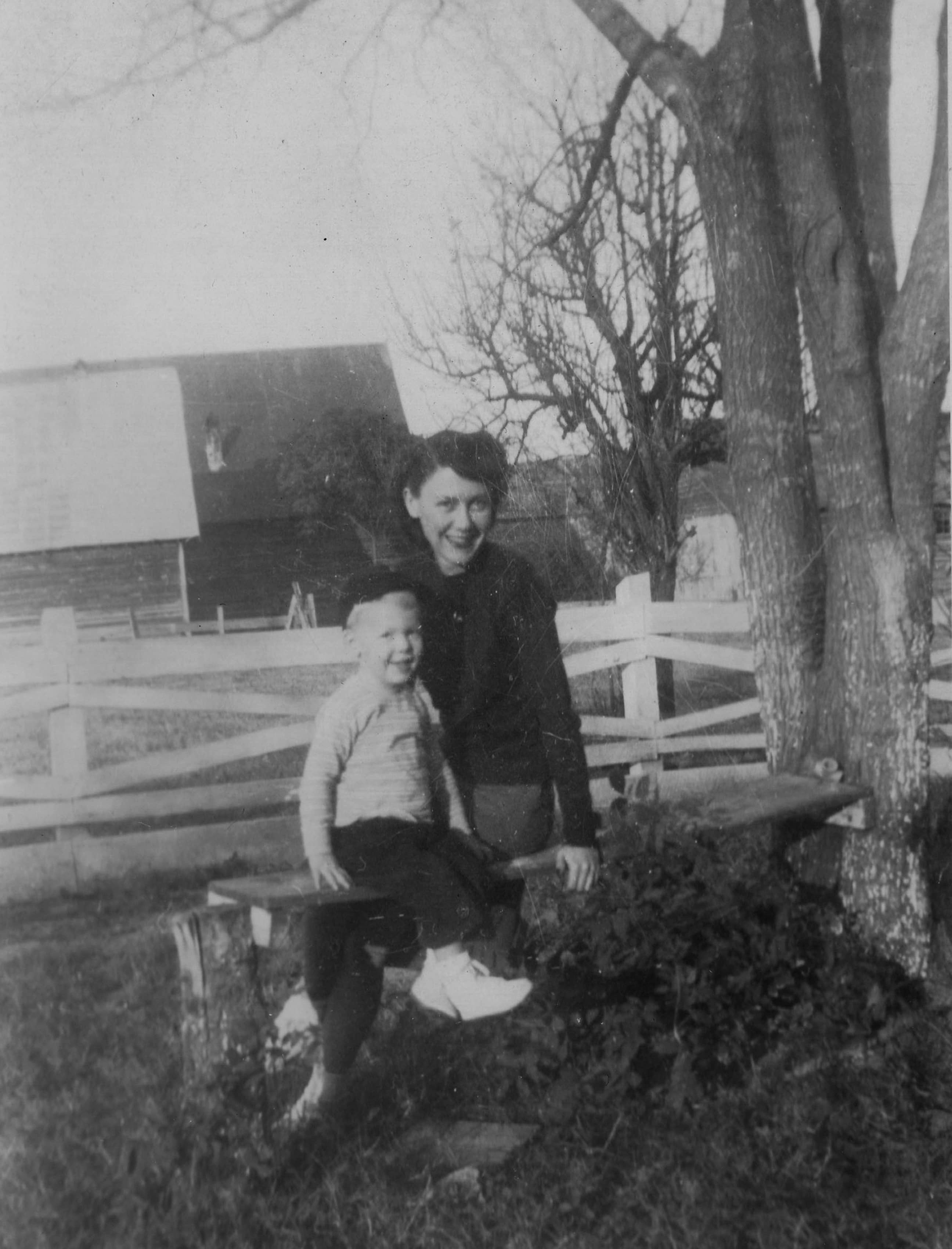 Mitch McConnell sits with his mother Julia “Dean” McConnell on a bench in this image from the mid 1940’s in Five Points, Ala. (McConnell Center at the University of Louisville via AP)

He couldn’t run as fast as the other kids. When he put on a swimsuit, his left leg had a narrower circumference, leaving him embarrassed. Even now, he says he has trouble climbing stairs.

“I was lucky,” he said, choking up as he recalls his mother, “who was determined to see me walk again.”

Of “tenacity, hard work and not giving up,” he said, ”My mother instilled all that in me before I was 4 years old and I think it’s been a guiding principle in how I lead my life.”

One of the first things McConnell did when he was elected to public office in Kentucky, he writes in his memoir, was buy a new pair of shoes.

In the Senate last month, McConnell began linking past to the present “just as soon as it became clear that we were actually endangering each other to be together.”

Senators were self-isolating and one, Rand Paul, announced he tested positive.

With the Capitol all but shuttered, the Senate raced to approve the rescue package. The votes tallied, McConnell adjourned the Senate.

“Let’s continue to pray for one another,” he said. “And for our country.”

Now from a quiet Capitol Hill — he is working from the second floor of his townhouse, his wife Transportation Secretary Elaine Chao on the third — the two suddenly find themselves like other Americans stumbling through the new stay-at-home normal.

“We’re soldiering all through,” he said.

A year ago, he returned to Warm Springs for the first time. At what is now a historic site, he reviewed files about his condition, his visits. He learned he sometimes received treatments when Roosevelt did, including the week the former president died.

Asked how his mom afforded his own medical care, he was stumped. Were there bills? “Honestly, I don’t know the answer to that,” he said. He said he would try to find out.

One memory that does stand clear is the arrival of the polio vaccine, and the relief it brought a weary populace.

As Congress considers the next aid package, he said he wants more money for health care.

“I’ve had a normal life, but I’ve been acutely aware of the disease that I had and the relief that the country had when they found the vaccine,” he said.

“We’re going to get that relief.”