Trump Quietly Shuts Down Asylum at US Borders to Fight Virus 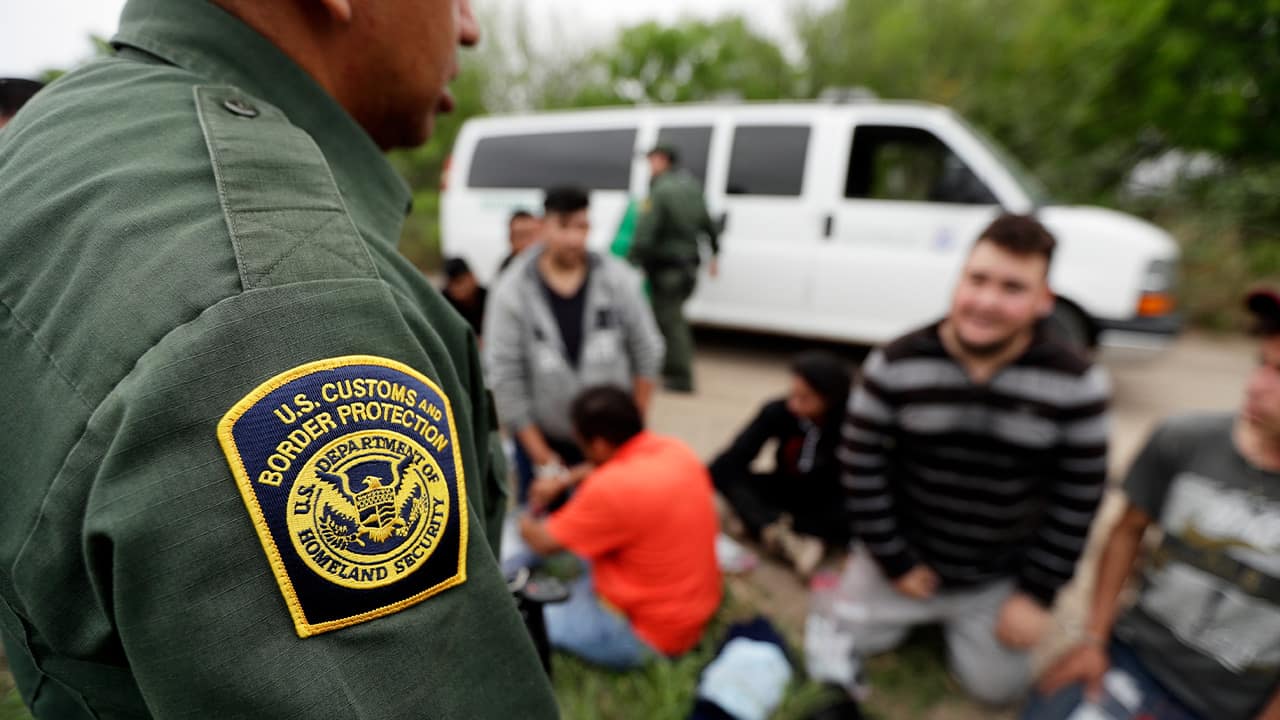 SAN DIEGO — A U.S. Border Patrol agent wouldn’t let Jackeline Reyes explain why she and her 15-year-old daughter needed asylum, pointing to the coronavirus. That confrontation in Texas came just days after the Trump administration quietly shut down the nation’s asylum system for the first time in decades in the name of public health.

Mexico is again providing critical support. It’s accepting not only Mexicans, but people from Guatemala, El Salvador and Honduras who accounted for well over half of all U.S. border arrests last year.

“The agent told us about the virus and that we couldn’t go further, but she didn’t let us speak or anything,” said Reyes, 35, who was shuttled to a crossing March 24 in Reynosa, Mexico, a violent border city.

She tried to get home to crime-ridden Honduras despite learning her brother had been killed there and her mother and 7-year-old daughter had fled to the Nicaraguan border. But she was stuck in Mexico as the virus closed borders in Central America.

The U.S. government used an obscure public health law to justify one of its most aggressive border crackdowns ever. People fleeing violence and poverty to seek refuge in the U.S. are whisked to the nearest border crossing and returned to Mexico without a chance to apply for asylum. It eclipses President Donald Trump’s other policies to curtail immigration — which often rely on help from Mexico — by setting aside decades-old national and international laws.

Mexico is again providing critical support. It’s accepting not only Mexicans, but people from Guatemala, El Salvador and Honduras who accounted for well over half of all U.S. border arrests last year.

The Trump administration has offered little detail on the rules that, unlike its other immigration policies, have yet to be challenged in court. The secrecy means the rules got little attention as they took effect March 20, the same day Trump announced the southern border was closed to nonessential travel.

“The administration is able to do what they always wanted to do,” said Aaron Reichlin-Melnick, policy counsel for the American Immigration Council, which has criticized the administration. “I don’t see this slowing down.”

The administration tapped a law allowing the head of the Centers for Disease Control and Prevention to ban foreigners if their entry would create “a serious danger” to the spread of communicable disease. The U.S. has the most cases in the world by far. CDC director Dr. Robert Redfield issued a 30-day order but said he may extend the rules. 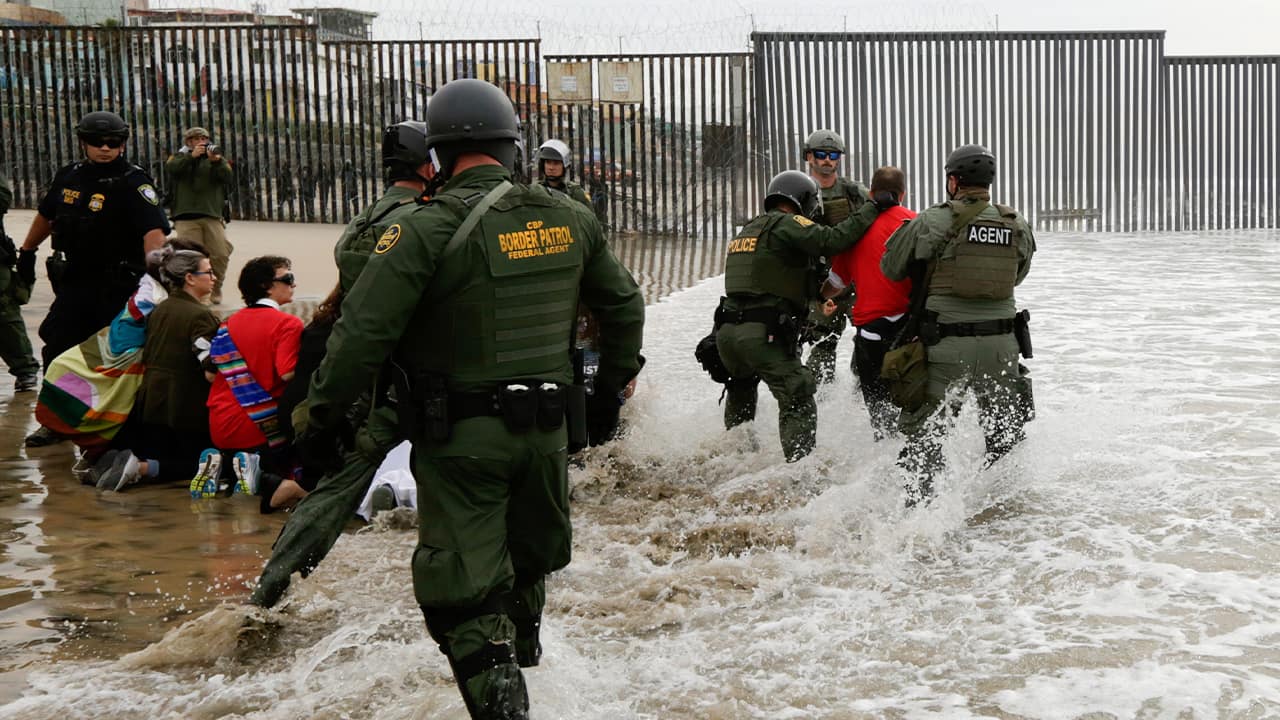 FILE – In this Dec. 10, 2018, file photo, Border Patrol agents, right, detain a man during a protest near the border with Tijuana, Mexico, in San Diego. The Trump administration has quietly shut down the nation’s asylum system for the first time in decades amid coronavirus concerns, largely because holding people in custody is considered too dangerous. (AP Photo/Gregory Bull, File)

Mexico won’t take unaccompanied children and other “vulnerable people,” including people over 65 and those who are pregnant or sick, said Carlos Gonzalez Gutierrez, Mexico’s consul general in San Diego.

The U.S. also is returning Central American children who travel with grandparents, siblings and other relatives, said a congressional aide who was briefed by U.S. Customs and Border Protection officials and spoke on the condition of anonymity because the information was not intended for public release. Previously, children who weren’t with parents or guardians were considered unaccompanied and automatically put into the asylum pipeline.

The health risks of holding migrants in crowded spaces like Border Patrol stations is “the touchstone of this order,” Redfield wrote. He said exceptions to immediately expelling someone can be considered but didn’t elaborate.

An internal Border Patrol memo obtained by ProPublica said an agent who determines that a migrant claims a “reasonably believable” fear of being tortured can be referred for additional screening under the U.N. Convention Against Torture, a lesser form of asylum that’s harder to qualify for.

Under the rules, agents take migrants to the nearest border crossing in specially designated vehicles and avoid stations, minimizing the risk of exposure to the virus.

Matthew Dyman, a spokesman for Customs and Border Protection, the Border Patrol’s parent agency, declined to comment on the internal memo or provide guidance about the new rules.

“Obtaining and posting leaked information is a great way to degrade trust and communication between CBP and the media,” he said.

In less than two weeks, the U.S. has expelled more than 7,000 people, according to the congressional aide who was briefed last week. Those not sent to Mexico are flown to their home countries. CBP had about 300 people in custody last week, down from a peak of more than 19,000 during last year’s surge of border crossers.

March’s border enforcement numbers were expected to be released Thursday and may offer a closer look at the impact of the virus.

Many Mexican Shelters Have Closed Over Virus Concerns, Leaving Many Stranded in Violent Cities

“We want to leave already, but I don’t know who can help us. There is no transportation, no bus, nothing.” — Fanny Jaqueline Ortiz of Honduras

For Reyes and others sent to Mexico, they don’t know what’s next.

Reyes said she joined dozens who entered the Guatemalan mountains illegally in a bid to reach Honduras but was stopped by soldiers and returned to Mexico, where she was quarantined in a migrant shelter. She said Mexican authorities questioned her about her health, but U.S. authorities didn’t.

Four adults and seven children expelled from Texas also crossed into the mountains and are now hiding at a house in Guatemala because of a curfew tied to the virus.

“We want to leave already, but I don’t know who can help us,” said Fanny Jaqueline Ortiz of Honduras, who was with her 12- and 3-year-old daughters. “There is no transportation, no bus, nothing.”

Many Mexican shelters have closed over virus concerns, leaving many stranded in violent cities or reliant on relatives in the U.S. to send money for rent.

Trump’s previous policies have targeted asylum but stopped short of ending it, acknowledging the 1951 U.N. Refugee Convention to provide haven to displaced people and a 1980 U.S. law that established the asylum system.

Under his “Remain in Mexico” policy, more than 60,000 asylum-seekers have been forced to wait across the border for U.S. court hearings. Hearings are temporarily suspended because of the virus.

Related Topics:asylumcoronavirusPresident Donald Trump
Up Next