16.8M Americans Thrown out of Work as Economic Toll Rises 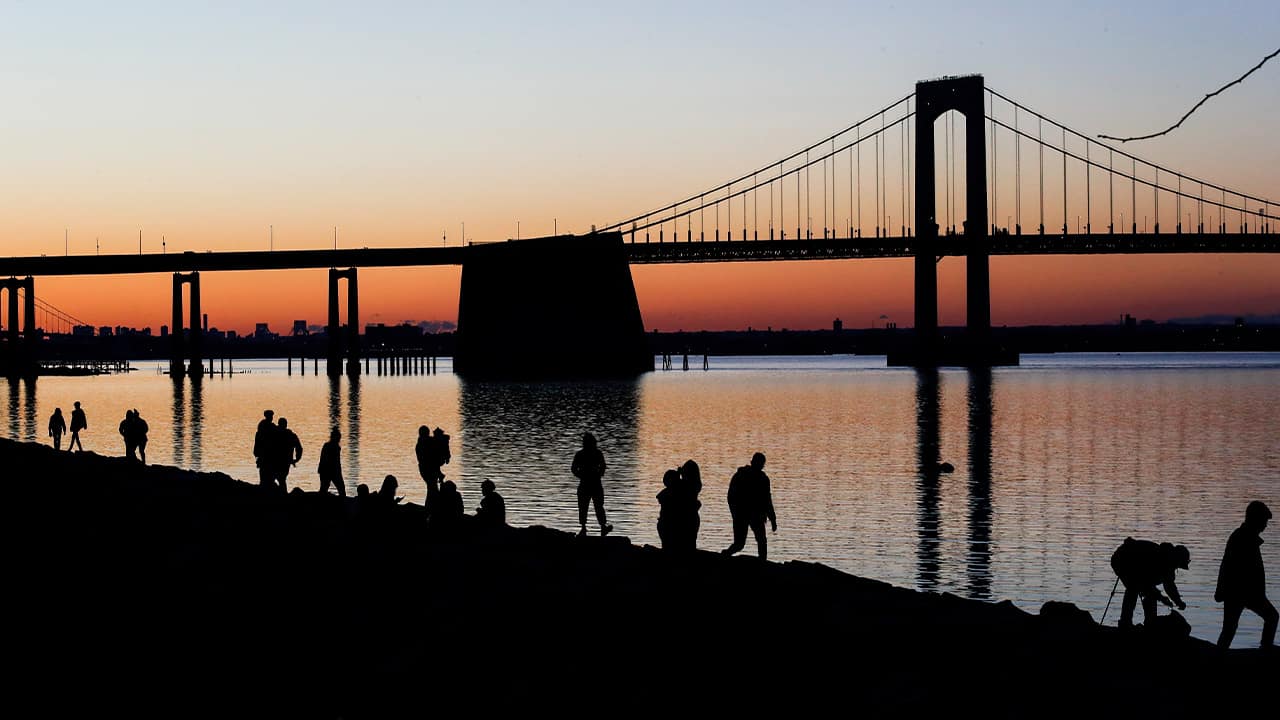 NEW YORK — A staggering 16.8 million Americans have been thrown onto the unemployment rolls in just three weeks, underscoring the terrifying speed with which the coronavirus outbreak has brought world economies to their knees.

Numbers released Thursday by the world’s largest economy showed that 6.6 million American workers applied for unemployment benefits last week, on top of more than 10 million in the two weeks before that.

Meanwhile, world leaders and health officials fervently warned that the hard-won gains against the scourge must not be jeopardized by relaxing social distancing during Easter weekend, one of the busiest travel times of the year on the Continent. Authorities around Europe banned holiday travel and set up roadblocks.

A spike in deaths in Britain and New York and surges of reported new infections in Japan and in India’s congested cities made it clear the battle is far from over.

Numbers released Thursday by the world’s largest economy showed that 6.6 million American workers applied for unemployment benefits last week, on top of more than 10 million in the two weeks before that.

That means more than 1 in 10 U.S. workers have been forced out of a job since the crisis took hold, the biggest, fastest pileup of job losses since record-keeping began in 1948.

The real numbers could be even higher because state unemployment offices around the country have been overwhelmed with claims, and some people have been unable to get through by telephone or website. And still more job cuts are expected. 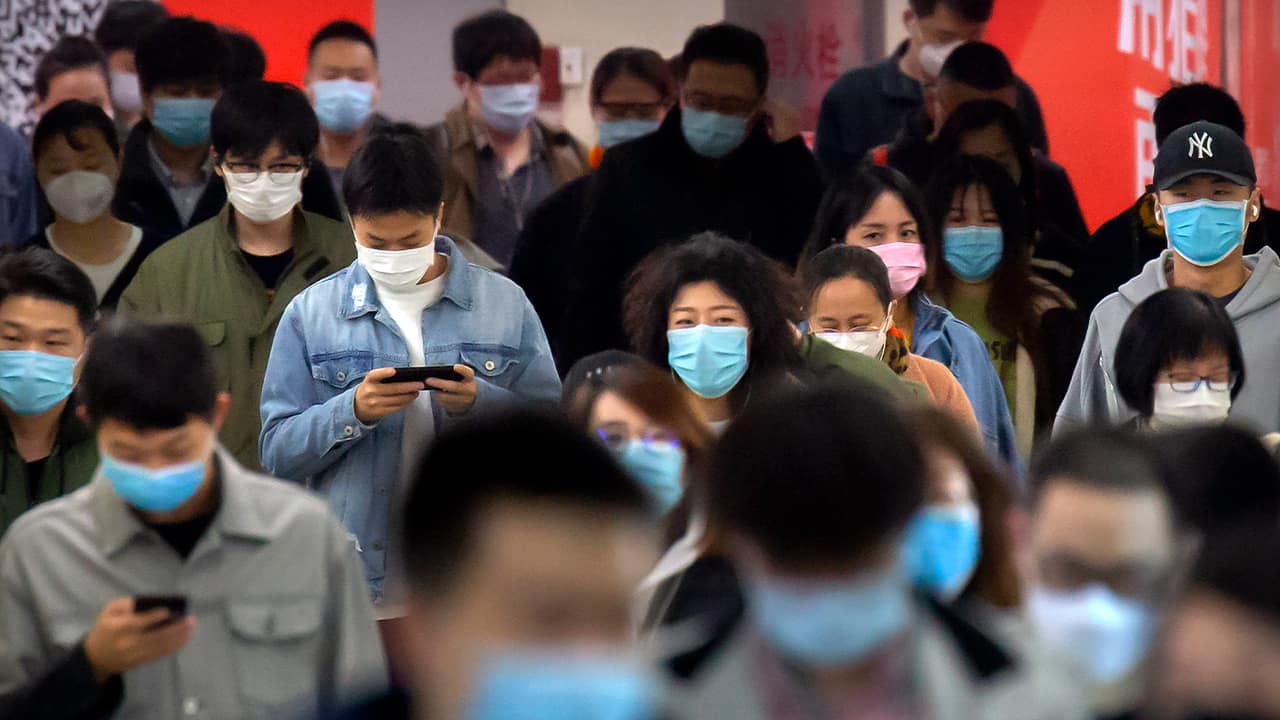 Commuters wear face masks to protect against the spread of new coronavirus as they walk through a subway station in Beijing, Thursday, April 9, 2020. China’s National Health Commission on Thursday reported dozens of new COVID-19 cases, including most of which it says are imported infections in recent arrivals from abroad and two “native” cases in the southern province of Guangdong. (AP Photo/Mark Schiefelbein)

In the U.S., the Federal Reserve Said It Would Provide up to $2.3 Trillion in Loans

The U.S. unemployment rate in April could hit 15% — a number last seen at the tail end of the Depression.

Xian Chang, whose Cafe China and two other New York restaurants normally employ around 150 people, said only about 40 are working. One restaurant is closed, the others are offering takeout only, and workers aren’t coming, in some cases because they are sick or afraid.

“Frankly, we are losing money every day we’re open,” he said.

In the U.S., the Federal Reserve said it would provide up to $2.3 trillion in loans targeted toward both households and businesses. In Europe, finance ministers from the 19-nation euro zone were set to make another attempt Thursday to agree on measures to help the bloc weather the crisis.

In many European countries, where the social safety nets tend to be stronger than in the U.S., government programs that subsidize workers’ pay are keeping millions of people on payrolls in places like Germany and France, though typically with fewer hours and at lower wages. Such workers are not counted in the countries’ unemployment figures.

The United Nations’ labor organization said the equivalent of 195 million full-time jobs could be lost in the second quarter to business shutdowns caused by the outbreak. The aid organization Oxfam International warned of a looming spike in global poverty, estimating half a billion people worldwide could be pushed into poverty if wealthier nations do not take urgent action. 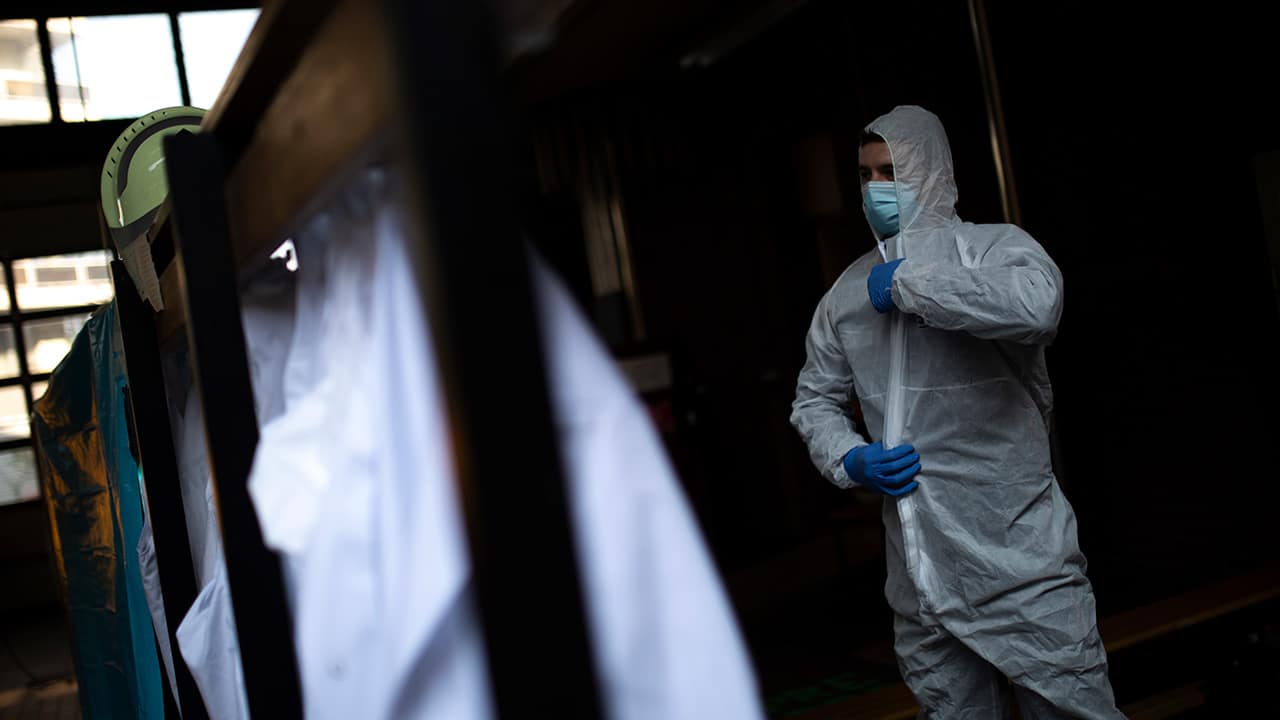 A firefighter puts on his full protective equipment before leaving to pick up a coronavirus patient at the firefighters headquarters in Brussels, Thursday, April 9, 2020. The new coronavirus causes mild or moderate symptoms for most people, but for some, especially older adults and people with existing health problems, it can cause more severe illness or death. (AP Photo/Francisco Seco)

The U.S. has by far the most confirmed infections with over 430,000, three times the number of the next three countries combined. New York state on Wednesday recorded its highest one-day increase in deaths, 779, for an overall death toll of almost 6,300. New York has more than 40% of the U.S. death total of around 15,000.

“One should not assume that we are going to be rescued by a change in the weather. You must assume that the virus will continue to do its thing.” — Dr. Anthony Fauci, the top American infectious-diseases expert

Dr. Anthony Fauci, the top American infectious-diseases expert, shot down hopes that warmer spring weather would bring an end to the crisis.

“One should not assume that we are going to be rescued by a change in the weather,” he said. “You must assume that the virus will continue to do its thing.”

Around the world, authorities warned against travel during the Easter and Ramadan religious holidays. German Chancellor Angela Merkel emphasized that “even short trips inside Germany, to the seaside or the mountains or relatives, can’t happen over Easter this year.” Dutch Prime Minister Mark Rutte said border crossings with Germany and Belgium could be closed over the weekend if there is too much traffic.

New Zealand police warned people not to drive to vacation homes over Easter and risk arrest, while Lithuania moved to lock down major cities. Portugal halted commercial flights and set up checkpoints on major roads.

Iran’s Supreme Leader Ayatollah Ali Khamenei suggested mass gatherings may be barred through the holy Muslim fasting month of Ramadan, which runs from late April through most of May.

Khamenei urged the Shiite faithful to pray at home. Shiites typically pray together and communities often share meals, especially during Ramadan. Iran has reported over 66,000 infections and over 4,100 deaths, although experts suspect those numbers under-report the country’s outbreak.

Indonesia’s president banned civil servants, police officers, military personnel and employees of state-owned companies from returning to their hometowns to celebrate the end of Ramadan. Typically tens of millions Indonesians crisscross the archipelago of 17,000 islands at that time of year.

Japan reported more than 500 new cases for the first time Thursday, a worrisome rise since it has the world’s oldest population and COVID-19 can be especially serious in the elderly.

Prime Minister Shinzo Abe has declared a state of emergency, but not a lockdown, in Tokyo and six other prefectures. Companies in the world’s third-largest economy have been slow to embrace working from home, and many commuters jammed Tokyo’s streets as usual. 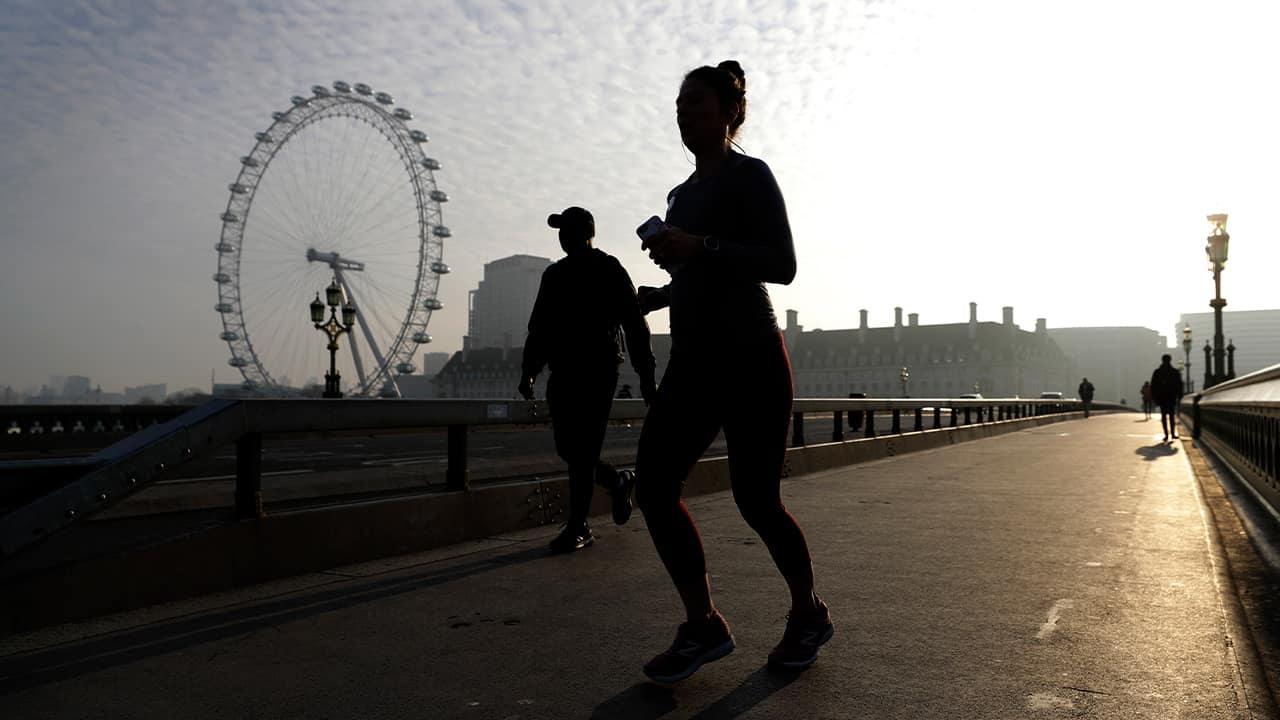 A jogger runs over Westminster Bridge near St Thomas’ hospital where Britain’s Prime Minister Boris Johnson has been admitted receiving treatment for coronavirus, in London, Thursday, April 9, 2020. Johnson has spent his fourth night in the hospital’s intensive care unit. The new coronavirus causes mild or moderate symptoms for most people, but for some, especially older adults and people with existing health problems, it can cause more severe illness or death. (AP Photo/Kirsty Wigglesworth)

Worldwide, the Number of Confirmed COVID-19 Cases Has Climbed to More Than 1.5 Million

New infections, hospitalizations and deaths have been leveling off in hard-hit Italy and Spain, which together have around 33,000 deaths, but the daily tolls are still shocking. Spain reported 683 more deaths Thursday, bringing its total to more than 15,200.

Spanish Prime Minister Pedro Sánchez acknowledged authorities were caught off guard by the crisis and failed to provide hospitals with critical supplies, including virus tests and protective clothing for medical workers.

“Europe reacted late. All of the West reacted late, and Spain is no exception,” Sánchez said.

Worldwide, the number of confirmed COVID-19 cases has climbed to more than 1.5 million, with nearly 90,000 deaths, according to Johns Hopkins University. The true numbers are much higher, because of limited testing, different rules for counting the dead and the efforts of some governments to conceal the extent of their outbreaks.

For most, the virus causes mild to moderate symptoms like fever and cough. But for some, especially older adults and the infirm, it can cause pneumonia.. More than 330,000 people have recovered.