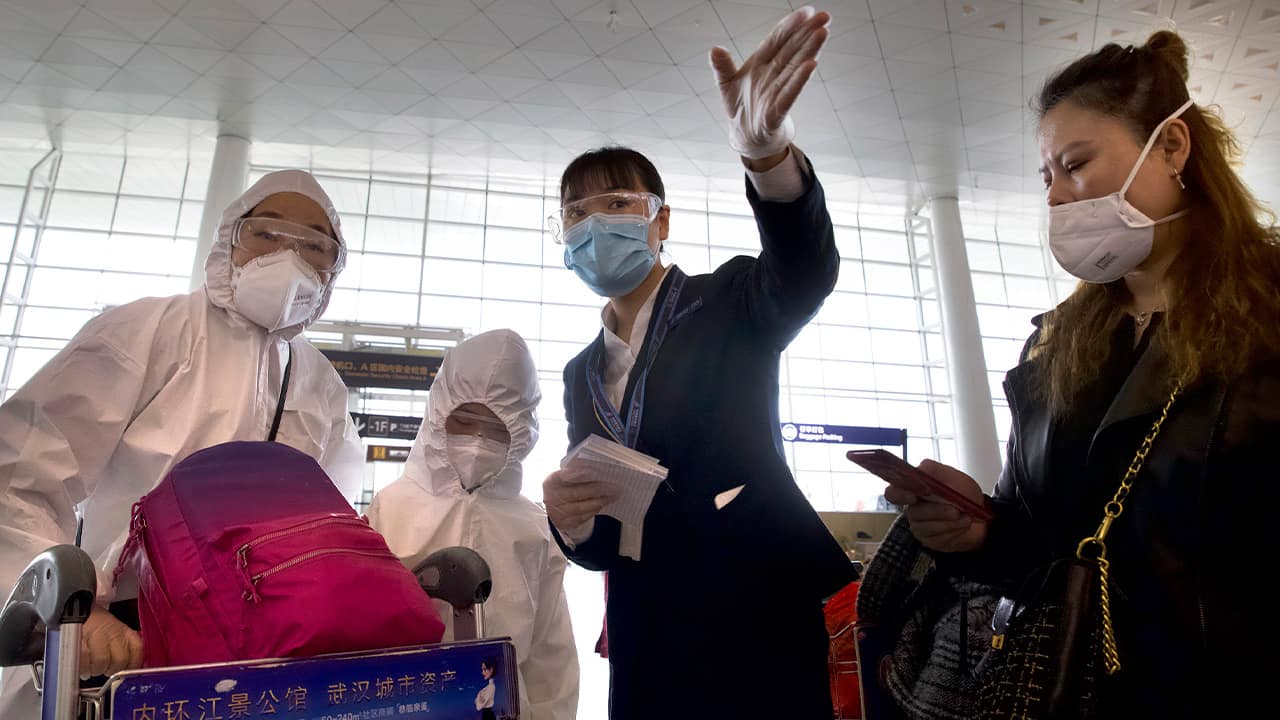 LONDON — After 76 days in lockdown, the Chinese city at the heart of the global pandemic reopened Wednesday, and tens of thousands immediately hopped on trains and planes to leave. Elsewhere, the economic, political and psychological toll of fighting the virus grew increasingly clear and more difficult to bear. 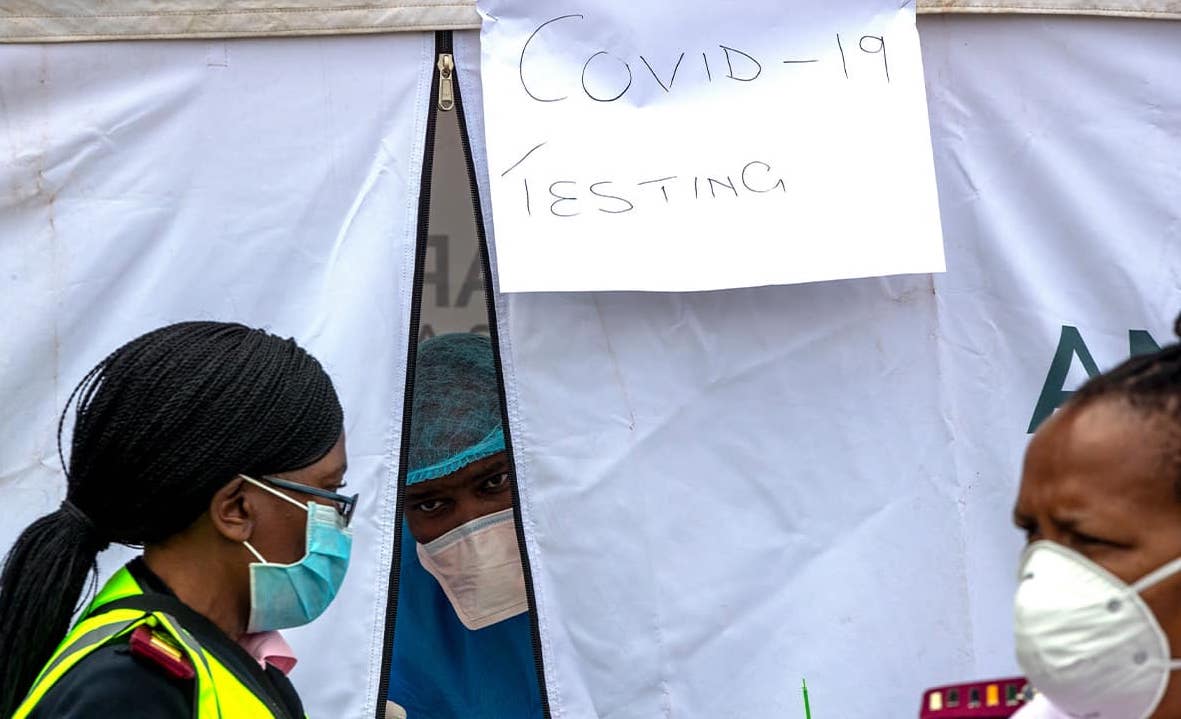 A health worker wearing personal protective gear inside a testing tent, gestures colleagues during the screening and testing for COVID-19, in Lenasia, south of Johannesburg, South Africa. (AP/Themba Hadebe)

British Prime Minister Boris Johnson spent a second night in intensive care with his country in the grips of its biggest crisis since World War II. The 55-year-old Johnson, the first major world leader confirmed to have COVID-19, was stable and responding to treatment, spokesman James Slack said.

Across the Atlantic, New York City endured one of its darkest days yet, with the death toll surging past 4,000, hundreds more than the number killed on 9/11. New York state recorded 731 new coronavirus deaths on Tuesday, its biggest one-day jump yet, for a statewide total of nearly 5,500.

New York’s mayor acknowledged Wednesday that the true death toll is even higher because the city’s count does not include people who died at home without ever being tested for the virus.

Across the U.S., the death toll reached about 13,000, with approximately 400,000 confirmed infections. Some of the deadliest hot spots were Detroit, New Orleans and the New York metropolitan area.

More economic pain was felt. Japan, the world’s third-largest economy, could contract by a record 25% this quarter, the highest since gross domestic product began to be tracked in 1955. The dismal prediction by two economists said exports are expected to dive 60% in the April-June period. 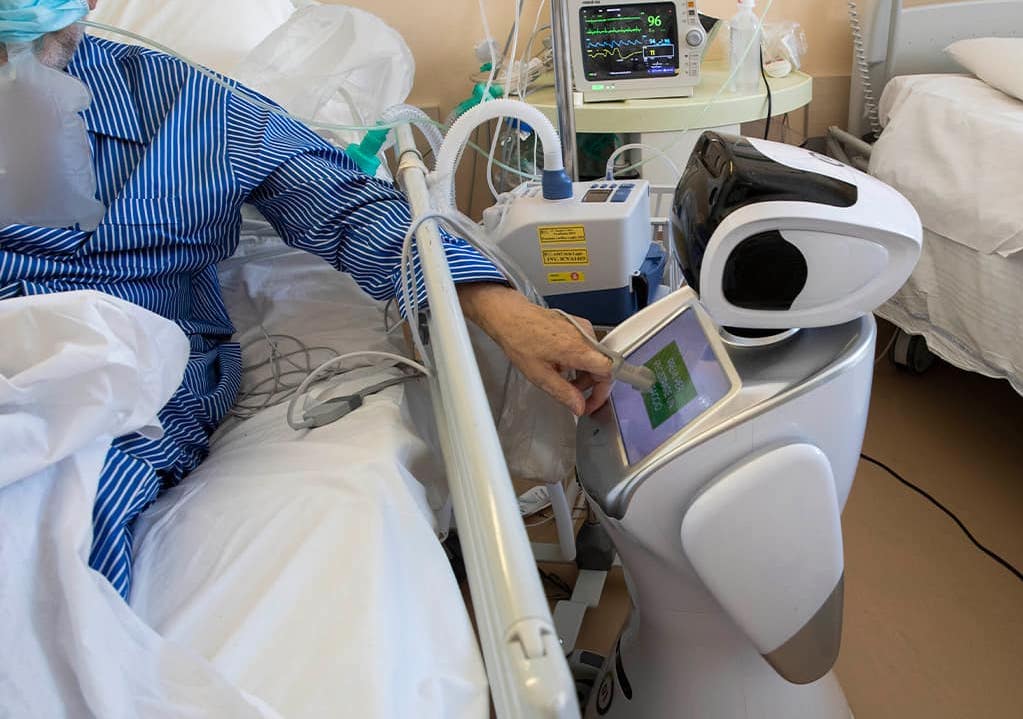 A coronavirus patient under treatment in the intensive care unit uses the touch screen of a robot at ‘Ospedale di Circolo’ hospital, in Varese, Italy. (AP/Luca Bruno)

The Bank of France said the French economy has entered recession, with an estimated 6% drop in the first quarter compared with the previous three months, while Germany, Europe’s economic powerhouse, is also facing a deep recession. Expert said its economy will shrink 4.2% this year.

European governments have been scrambling to put together hundreds of billions of euros to save lives and prevent bankruptcies. The countries worst hit by the virus are among those that can least afford the costs, like Italy and Spain. But they disagree over how to tackle the challenge.

With European health workers toiling round the clock in a desperate bid to save lives, the psychological toll is becoming unbearable.

Weeks into Italy’s outbreak, two nurses have killed themselves and more than 70 doctors and 20 nurses have died from the virus. Hospitals are making therapists available to help staff cope with the effects of seeing so much death. Italy is the hardest-hit country overall, with over 17,000 deaths.

In Spain, nurse Diego Alonso said he and colleagues have been using tranquilizers to cope.

“The psychological stress from this time is going to be difficult to forget. It has just been too much,” he said.

Spain’s Health Ministry on Wednesday reported 757 new deaths, bringing the total to more than 14,500, and 6,180 new infections. Both figures were slightly higher than Tuesday’s, when the first increase in five days was explained by a backlog of test results and unreported weekend fatalities. 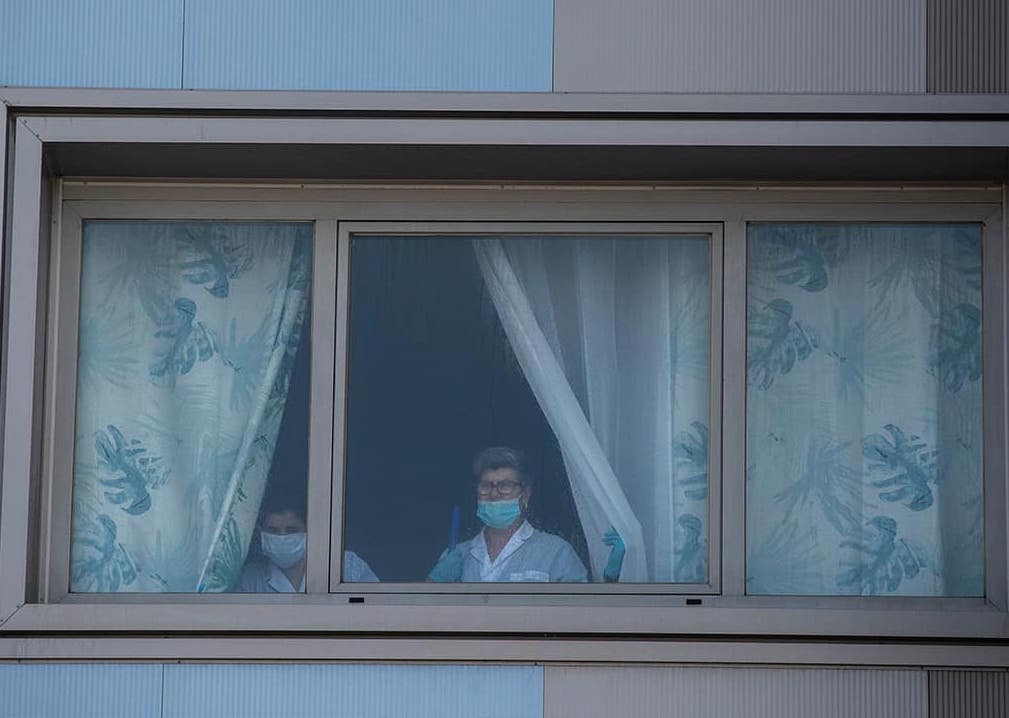 Personal cleaner looks out from a window at the Padre Zurita residence in Alcorcon, Spain. (AP/Manu Fernandez)

Spanish authorities have acknowledged that laboratory bottlenecks and a shortage of testing kits are giving an incomplete picture of the disaster.

In Wuhan, the Chinese city of 11 million where the pandemic began, residents waved flags and the city staged a light show with skyscrapers and bridges radiating images of health workers helping patients.

Restrictions in the city where most of China’s more than 82,000 virus cases and over 3,300 deaths were reported have been gradually eased in recent weeks as new cases declined.

“I haven’t been outside for more than 70 days,” said Tong Zhengkun. “Being indoors for so long drove me crazy.”

In Washington, President Donald Trump threatened to freeze U.S. funding to the World Health Organization, saying the U.N. agency had “missed the call” on the pandemic. He suggested that WHO went along with Beijing’s efforts months ago to minimize the outbreak’s severity.

WHO has praised China for its transparency on the virus despite wide skepticism among experts about the country’s actual number of infections and deaths.

Worldwide, More Than 1.4 Million People Have Been Confirmed Infected and Over 80,000 Have Died

Some African leaders bristled at Trump’s attack on WHO, especially after its head, Tedros Adhanom Ghebreyesus of Ethiopia, spoke up this week against “racist” comments by two French doctors who said a coronavirus vaccine could be tested in Africa. Tedros condemned the French remarks as showing a “colonial mentality.”

“Surprised to learn of a campaign by the U.S. govt against WHO’s global leadership. The African Union fully supports WHO and Dr. Tedros,” AU chief Moussa Faki Mahamat tweeted.

In Europe, Britain and France appeared to be at different stages of the crisis than Italy, where new infections and virus deaths were declining daily. Deaths in Britain reached nearly 6,200 after a one-day increase Tuesday of 786, its highest figure yet, while in France, the number of dead climbed to more than 10,300.

Worldwide, more than 1.4 million people have been confirmed infected and over 80,000 have died, according to Johns Hopkins University. The true numbers are almost certainly much higher, because of limited testing, different rules for counting the dead and deliberate underreporting by some governments.

For most, the virus causes mild to moderate symptoms such as fever and cough. But for some older adults and the infirm, it can cause pneumonia and death. Over 300,000 people have recovered.