'We Are All Flying Blind': Virus Testing Logjam Not Abating in California 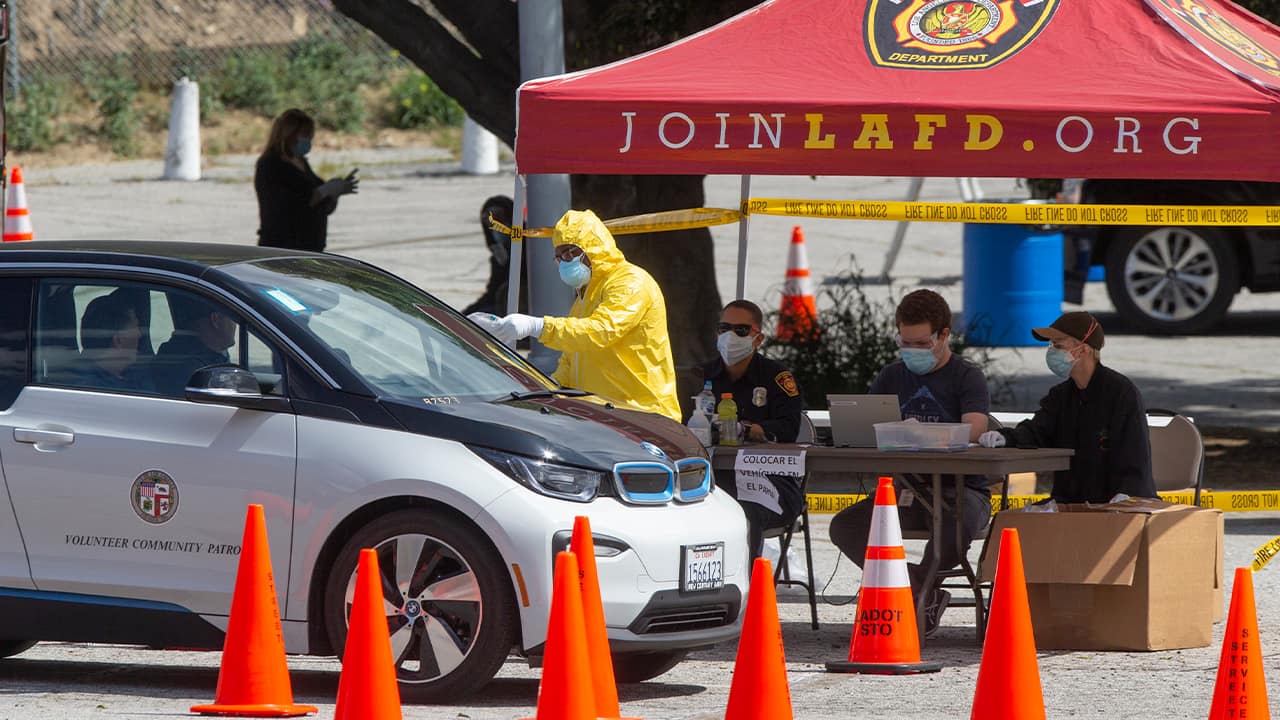 LOS ANGELES — California is ramping up testing for coronavirus even as a backlog of 59,000 pending tests is growing, delaying some people from getting results for up to 12 days and leaving an incomplete picture of how widespread the outbreak is in the state.

“The backlogs are not necessarily getting better, in real time, but we’re hopeful.” — Gov. Gavin Newsom

Testing rolled out slowly in California but is accelerating now. More than 90,000 tests have been administered statewide, but nearly two-thirds of those results were still pending, according to state figures.

“The backlogs are not necessarily getting better, in real time, but we’re hopeful,” Gov. Gavin Newsom said Thursday.

Newsom said it was a national problem — as is the shortage of tests and a lack of the masks, gloves and other protection healthcare workers must wear to administer tests from people who are possibly carrying the highly contagious virus.

The state may be able to fast-track test results as more people receive blood-based tests, Newsom said. Testing that relies on taking nasal swabs, the most prominent initial testing measure, is primarily responsible for delays.

The average wait time in Los Angeles County is five to six days, but some results have taken 10 or 12 days, said Barbara Ferrer, the county health director. The county uses a mix of privately and publicly run labs.

Increasing the number of tests without the capacity to handle the volume at labs “doesn’t really help us as much as it ought to if there are really long waits for people to find out whether they are positive,” Ferrer said. “It’s really important for us to know if they’re positive — both for their medical treatment but also so that we can immediately move those people into isolation, identify their close contacts and have their close contacts quarantining.”

The coronavirus mainly is spread though coughs and sneezes. For most people, it causes mild or moderate symptoms, such as fever and cough, that clear up in two to three weeks. For some, especially older adults and people with existing health problems, it can cause more severe illness, including pneumonia and death. 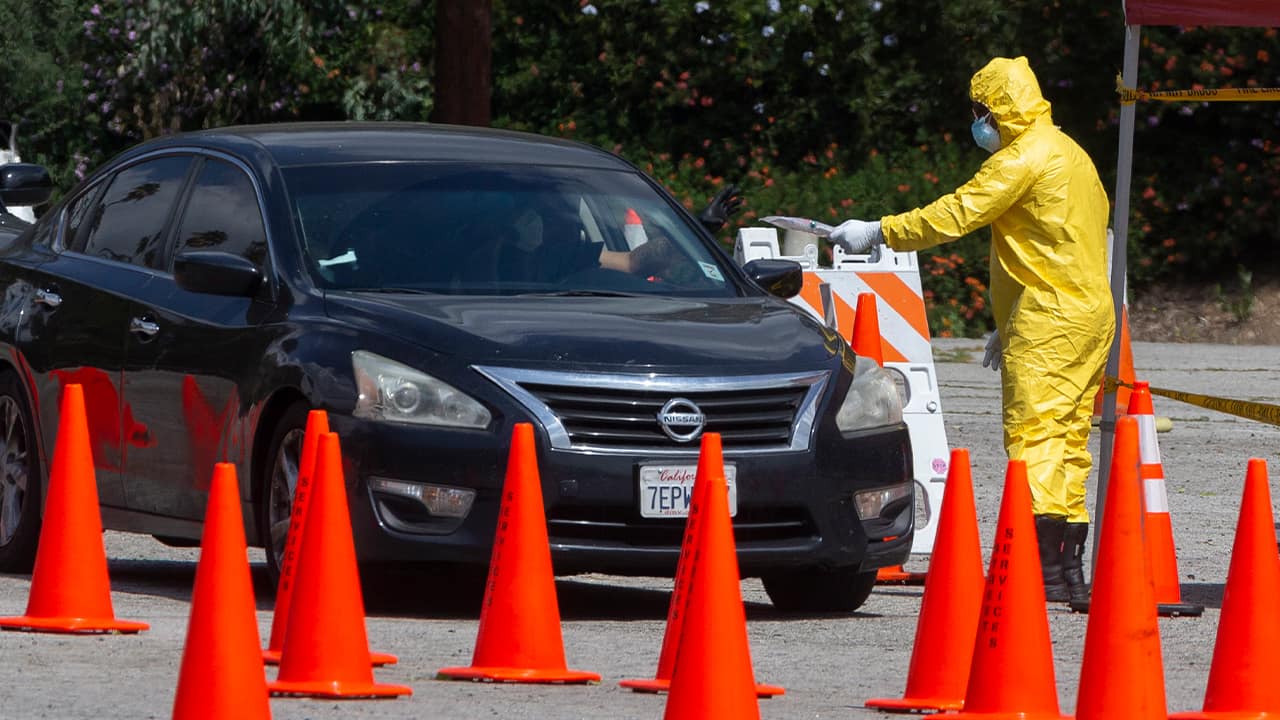 California has surpassed 10,000 cases and 238 deaths, according to a global tally by Johns Hopkins University. State health officials are girding for a peak of cases they expect in mid-May and could fill all the state’s 75,000 hospital beds and 66,000 emergency beds being assembled now in hospitals and other locations.

Newsom has emphasized for weeks that the state needs to flatten the curve of cases so the peak arrives as late as possible and the state has time to prepare for it. Having accurate and up-to-date data from testing is key to tracking that curve.

Newsom said he’s put together a new task force on testing and expects to announce in the coming days an effort to substantially increase California’s testing capacity.

Currently the state has prioritized tests be used on the most symptomatic and vulnerable patients, along with health care workers and some others. That further clouds a picture of an outbreak.

“Testing is uneven, which is to put it kindly,” said Dr. David Eisenman, director of the Center of Public Health and Disasters at the University of California, Los Angeles. “The number of cases identified is not an accurate count of anything because it’s such a select group of people who get the testing done.”

Dr. Shawn Nasseri, a Beverly Hills doctor, said it’s frustrating and disheartening to try to diagnose patients when he has been rationed only a few test kits a week. He was able to administer six tests in a drive-thru line in the alley behind his office a week ago and was still awaiting results Thursday from one of those.

“We’re all flying blind. We’re hoping and praying more testing will become available,” Nasseri said. “We have absolutely no idea how many people are truly infected at this point.”

The wait for a test and the time it takes to get results varies by county and a mix of hospitals and private testing labs.

Marin County, which relies on a state lab for testing, is limited to conducting 50 tests a day, spokeswoman Laine Hendricks said. It takes two to three days for the state to deliver results.

Waiting for test results for those who fear they have coronavirus can be stressful, said Michelle Bertinelli, who got tested in Los Angeles after her mother, whom she had recently seen, found out she was infected after being exposed to the virus at church.

Sonoma County, which reported no backlog, is able to test 100 kits a day at its own lab and get results in 24 hours or less, spokeswoman Jennifer Larocque said.

Orange County’s own lab aims for a two-day turnaround for the 80 to 100 tests it handles a day, but often completes them in 12 to 24 hours, said Megan Crumpler, director of Orange County’s Public Health Laboratory.

“We’re just fortunate that we’re not getting inundated,” Crumpler said.

Riverside County said its own lab takes one to three days to process results, though private labs take five to seven days, said Jose Arballo Jr of of the county public health agency.

Waiting for test results for those who fear they have coronavirus can be stressful, said Michelle Bertinelli, who got tested in Los Angeles after her mother, whom she had recently seen, found out she was infected after being exposed to the virus at church.

Bertinelli waited in her car in line for 2.5 hours at a drive-thru testing site before she was given a swab with instructions to administer it herself. She was told she would have results in three days. But as the days passed, she started to feel like she had a cold from the “stress of not knowing.”

It took a full week to get results that she did not have COVID-19. However, her roommate tested positive, so Bertinelli returned to get tested again Wednesday. The waiting has begun anew, and the stress has worsened because she and the infected roommate share a bathroom.

“I pretty much stay in my room all day, and going to the bathroom feels like a death sentence each time,” she said.

Related Topics:coronavirusLos Angeles
Up Next

Bay Area Limits Housing Construction to 'Affordable' Homes. What About Rest of California?

Fresno Business Is Cleaning Nurse and Doctor Scrubs for Free