MOSCOW — President Vladimir Putin on Thursday ordered most Russians to stay off work until the end of the month as part of a partial economic shutdown to curb the spread of the coronavirus.

Speaking in a televised address to the nation on Thursday, Putin said he was extending the non-working policy he ordered earlier for this week to remain in force throughout April. He emphasized that all employees should continue earning their regular salaries during the period.

Putin said some essential industries will keep operating, and grocery stores and pharmacies will remain open.

He said Russia’s virus-prevention strategies have bought time and helped slow down the outbreak but also warned that the number of cases will continue climbing.

“The threat remains, and experts believe that the epidemic is yet to reach its peak in the world, including our country.” — President Vladimir Putin

Putin said it would be up to regional authorities to decide which companies and organizations could keep working in their areas depending on the situation.

Earlier this week, the Russian parliament empowered the cabinet to introduce the state of emergency allowing it to tighten restrictions — an authority that previously had belonged only to the president.

Some Kremlin critics have assailed Putin for stopping short of declaring a nationwide lockdown, opting instead for the ill-defined non-working order. 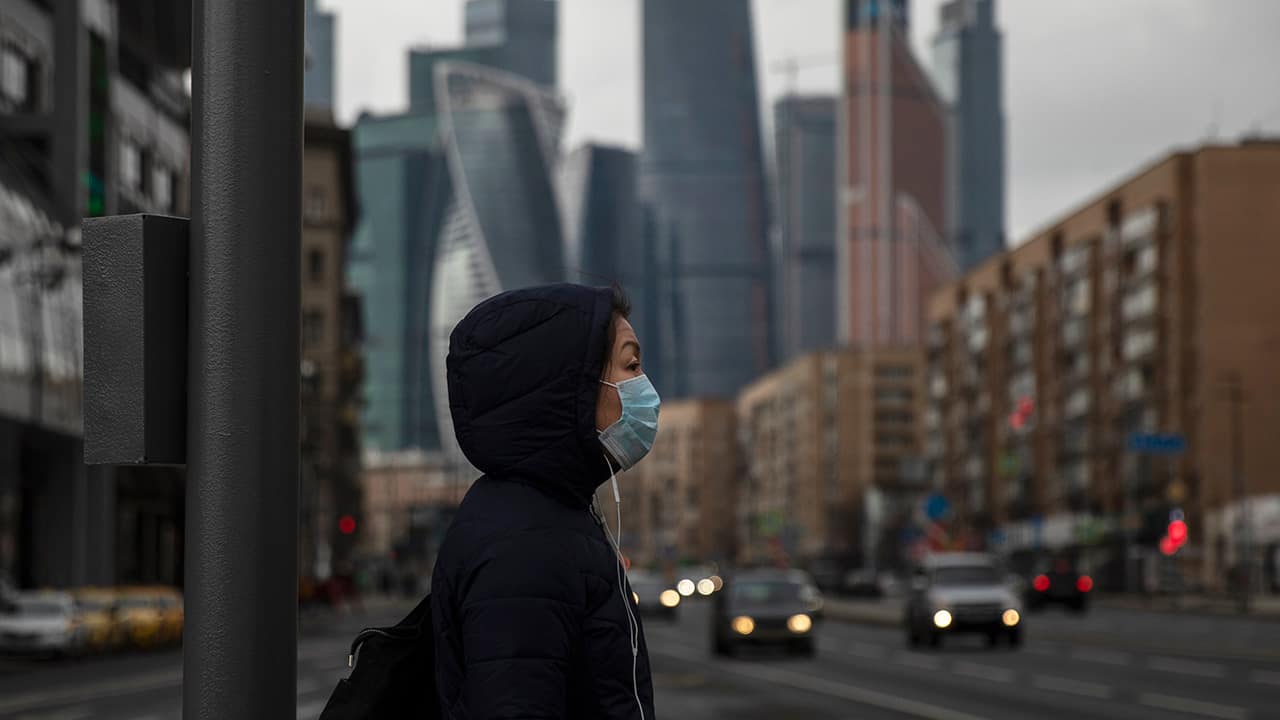 A woman wearing face mask waits to cross a nearly empty road due to residents taking the advice of staying at home to avoid the spread of the coronavirus, with Moscow City skyscrapers in the background, in Moscow, Russia, Thursday, April 2, 2020. Online shopping for food and other supplies has boomed in Moscow after the authorities put most residents on lockdown. The new coronavirus causes mild or moderate symptoms for most people, but for some, especially older adults and people with existing health problems, it can cause more severe illness or death. (AP Photo/Pavel Golovkin)

Russian Officials Registered 771 New Cases on Thursday, a 43% Increase From the Previous Day

Many observers pointed out that Putin’s decision to let the cabinet and regional governors decide on specific steps to counter the outbreak reflected an attempt to avoid being associated with unpopular moves and bear responsibility for the mounting number of cases.

Putin argued that regional authorities must be given a free hand to handle anti-coronavirus measures because the situation varies widely across the vast country.

“Our country is very big, population density differs widely and there are areas where the coronavirus already is posing a serious threat like in Moscow where we haven’t been able yet to change the situation despite the measures being taken,” Putin said.

In Moscow, which has about two-thirds of all known virus cases in Russia, the mayor introduced a strict lockdown that is to be enforced through electronic surveillance.

Most other regions of Russia followed Moscow’s example, but some areas so far unscathed by the epidemic have applied more lax rules.

Russian officials registered 771 new cases on Thursday, a 43% increase from the previous day, bringing the country’s reported total to 3,548 with 30 deaths.

The Russian leader said that along with safeguarding the public’s health, it’s also important to protect people’s incomes and prevent a spike in unemployment. 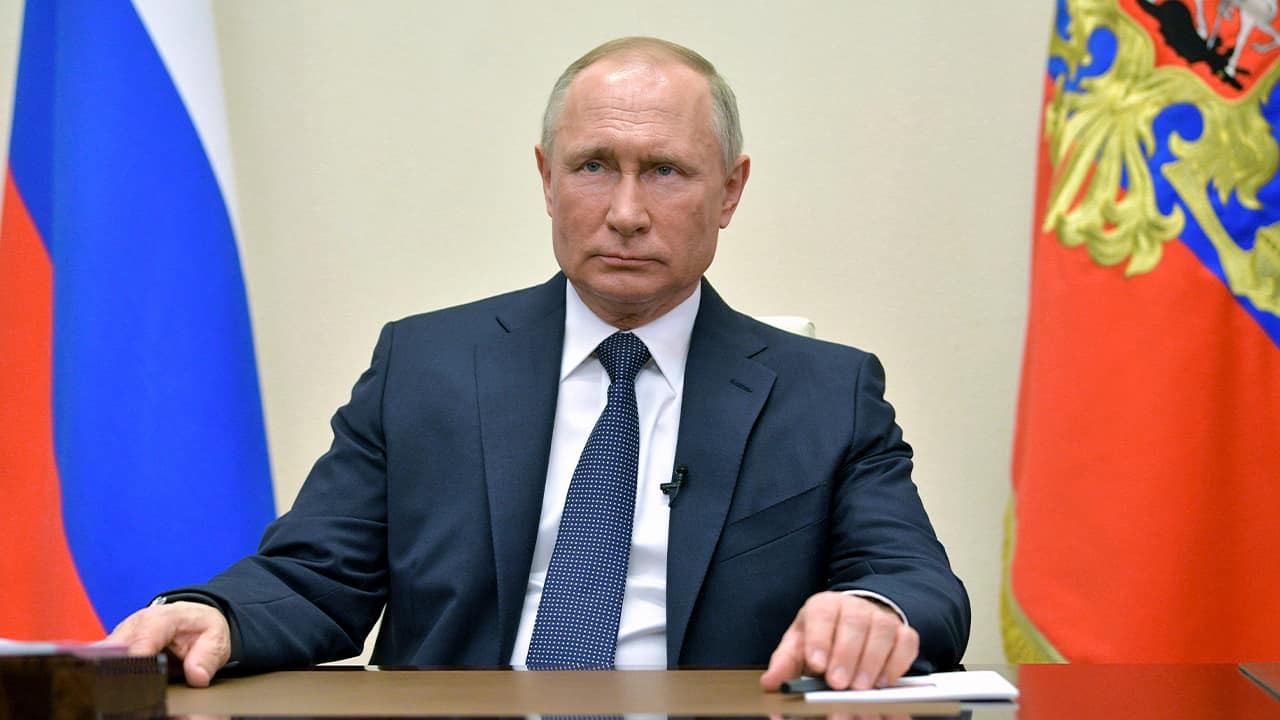 Russian President Vladimir Putin addresses Russian citizens on the State Television channels at the Novo-Ogaryovo residence outside Moscow, Russia, Thursday, April 2, 2020. Putin has ordered most Russians to stay off work until the end of the month to curb the spread of the coronavirus. Speaking in a televised address to the nation on Thursday, Putin said he was extending the non-working policy he ordered earlier for this week to remain in force throughout April. (Alexei Druzhinin, Sputnik, Kremlin Pool Photo via AP)

“An efficient and stable economy is key to solving our tasks, including in the health care system,” he added.

But the opposition said the government has failed to offer a feasible program to support business, warning that Putin’s order would effectively kill most of the nation’s small and medium enterprises and leave many Russians starving.

The government has insisted that the country is well prepared and has all the necessary supplies. Moscow has sent teams of military medics to Italy to help counter the outbreak and on Wednesday delivered a planeload of medical supplies to the United States.

“The people have no money to just sit at home without working, and employers have no cash,” Russia’s top opposition leader Alexei Navalny tweeted.

There have been broad fears that Russia’s underfunded health care system would be hard-pressed to deal with the outbreak. Medical workers across the country have complained about shortages of essential protective gear and other supplies.

The government has insisted that the country is well prepared and has all the necessary supplies. Moscow has sent teams of military medics to Italy to help counter the outbreak and on Wednesday delivered a planeload of medical supplies to the United States.

The flight follows Monday’s phone call between Putin and U.S. President Donald Trump in which they discussed cooperation to fight the outbreak. Trump hailed Russia’s move as “very nice.”

The Russian Foreign Ministry said the U.S. paid for half of the medical supplies while the other half of the cost was sponsored by Russia’s state investment fund.

Russian officials have angrily dismissed claims that the Kremlin was seeking political gains by providing medical aid to Italy and other countries. In February, Russia provided medical aid to China and later dispatched assistance to Iran, North Korea, Venezuela and various ex-Soviet nations.