NEW YORK — The coronavirus outbreak has thrown 10 million Americans out of work in just two weeks, the swiftest, most stunning collapse the U.S. job market has ever witnessed, and economists warn unemployment could reach levels not seen since the Depression, as the economic damage piles up around the world.

The bleak news Thursday — a record-shattering 6.6 million new unemployment claims on top of last week’s unprecedented 3.3 million — came as the competition for scarce ventilators, masks and other protective gear seemed to grow more desperate and deaths mounted with alarming speed in Italy, Spain and New York, the most lethal hot spot in the nation, with nearly 2,400 lives lost.

Worldwide the number of confirmed infections hit another gloomy milestone — 1 million, with more than 50,000 deaths, according to the tally kept by Johns Hopkins University. But the true numbers are believed to be much higher, because of testing shortages, many mild cases that have gone unreported, and suspicions that some countries are covering up the extent of their outbreaks.

The mounting economic fallout almost certainly signals the onset of a global recession, with job losses that are likely to dwarf those of the Great Recession more than a decade ago.

“My anxiety is through the roof right now, not knowing what’s going to happen,” said Laura Wieder, laid off from her job managing a now-closed sports bar in Bellefontaine, Ohio.

About half of all working Americans report some kind of income loss affecting themselves or a member of their household because of the epidemic, and poor people and those without college degrees are especially likely to have lost a job, according to a poll from The Associated Press-NORC Center for Public Affairs Research. Sixty percent of Americans say the national economy is “poor,” an alarmingly swift reversal from the 67% who called it “good” in January.

Formalizing New Guidance to Recommend That Many Americans Wear Masks

With over 220,000 people infected in the U.S. and the death toll topping 5,300, sobering preparations were under way. The Federal Emergency Management Agency asked the Pentagon for 100,000 body bags because of the possibility funeral homes will be overwhelmed, the military said.

The Trump administration was formalizing new guidance to recommend that many Americans, if not almost all, wear coverings such as non-medical masks, T-shirts or bandannas over their mouths and noses when out in public, while reserving medical-grade masks, particularly short-in-supply N95 masks, for those dealing directly with the sick.

The Democratic Party pushed its nominating convention back a month, to mid-August. Federal authorities proposed a $611,000 fine against the Seattle-area nursing home connected to at least 40 coronavirus deaths, accusing it of infractions that included failure to report and rapidly manage the outbreak. And a days-long standoff in Florida was resolved when passengers aboard two cruise ships that have had several coronavirus cases and four deaths won permission to come ashore.

Elsewhere around the world, the number of people applying for welfare benefits in Britain increased nearly tenfold to almost 1 million in the past couple of weeks. At least a million on the Continent are estimated to have lost their jobs over the same period, and the actual number is probably far higher. Spain alone added over 300,000 to its unemployment rolls in March.

But the job losses there appear to be far smaller than in the U.S. because of Europe’s greater social safety nets, including government programs to reduce workers’ hours without laying them off, in the hope of bringing them back quickly once the crisis passes.

With its health care system in dire shape, Spain reported a record one-day number of deaths, 950, bringing its overall toll to about 10,000, despite signs that the infection rate is slowing. 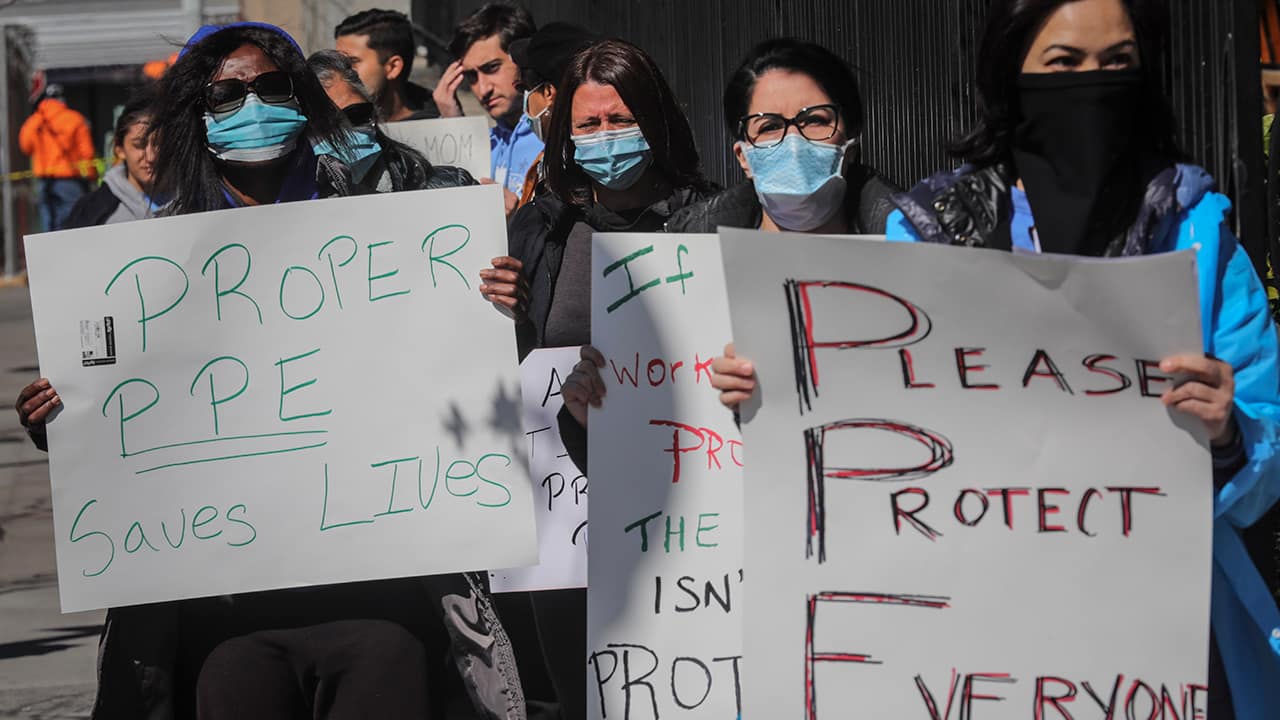 Gov. Andrew Cuomo Warned That the State Is Quickly Running out of Breathing Machines

Italy recorded 760 more deaths, for a total of 13,900, the worst of any country, but new infections continued to level off. More than 10,000 medical personnel in Italy have been infected and 69 doctors have died, authorities said.

France recorded a running total of about 4,500 deaths in hospitals, 471 just in the past day. But officials expect the overall toll to jump significantly because they are only now starting to count deaths in nursing homes and other facilities for older people. More than 880 such deaths have been tallied.

The competition for ventilators, masks and other vital supplies was cutthroat.

In New York, Gov. Andrew Cuomo warned that the state is quickly running out of breathing machines: “At the current burn rate, we have enough ventilators for six days.”

He also said the state will pay a premium to manufacturers — and cover the cost of converting their factories, too — to produce gowns and other badly needed protective gear. “But we need this like now. Not talking about two months, three months, four months,” Cuomo said. “We need these materials now.”

The governor has complained that the 50 states are competing against each other for protective gear and breathing machines, or are being outbid by the federal government, in a competition he likened to being on eBay.

In France, a top health official in the country’s hard-hit eastern region said American officials swooped in at a Chinese airport to spirit away a planeload of masks that France had ordered.

“On the tarmac, the Americans arrive, take out cash and pay three or four times more for our orders, so we really have to fight,” Dr. Jean Rottner, an emergency room doctor in Mulhouse, told RTL radio.

Nine leading European university hospitals warned they will run out of essential medicines for COVID-19 patients in intensive care in less than two weeks.

Over 200,000 People Worldwide Have Recovered

A shipment of nearly 5,900 medical masks that Alabama’s Montgomery County received from the U.S. government stockpile was unusable because of dry rot, the emergency management director said. The masks had a 2010 expiration date, according to the city of Montgomery.

In Louisiana, deaths climbed to at least 310 and confirmed infections spiked 42% to nearly 9,200, in what Gov. John Bel Edwards attributed in part to backlogged test results finally coming back from laboratories.

“We want people focused on what they can do about it. Don’t be despondent. Don’t despair. Don’t throw your hands up,” he said. “We can determine how bad it gets by whether we comply with the social distancing, the stay-at-home order and all the hygiene we’ve been promoting.”

In Virginia’s Henrico County, a nursing home reported that coronavirus deaths there had climbed to 16 and that 92 residents had tested positive.

In New York, where hospitals are getting swamped with patients and the worst of the outbreak is still probably weeks away, more than 85,000 medical volunteers have stepped forward, according to Cuomo, who said about a quarter of them were from out of state. He thanked them profusely.

“I will be the first one in my car to go wherever this nation needs help as soon as we get past this. I will never forget how people across this country came to the aid of New Yorkers when they needed it,” he said.

For most people, the coronavirus causes mild or moderate symptoms, such as fever and cough. But for others, especially older adults and people with health problems, it can cause severe symptoms like pneumonia. Over 200,000 people worldwide have recovered, by Johns Hopkins’ count.

Roughly 90% of the U.S. Population Is Now Under Stay-At-Home Orders

With large portions of America under lockdown, job losses for the world’s biggest economy could double to 20 million and unemployment could spike to as high as 15% by the end of the month, many economists have said. Unemployment in the U.S. hasn’t been that high since the tail end of the Depression, just before the U.S. entered World War II.

“This kind of upending of the labor market in such a short time is unheard of,” said Heidi Shierholz, an economist at the Economic Policy Institute, a think tank.

Roughly 90% of the U.S. population is now under stay-at-home orders, and many factories, restaurants, stores and other businesses are closed or have seen sales shrivel.

Laid-off workers can tap money made available in the $2.2 trillion rescue measure passed by Congress. It adds $600 a week to unemployment benefits, extends eligibility to 39 weeks and for the first time wraps in part-timers and workers in the so-called gig economy, such as Uber drivers.

Kathryn Lickteig, a cook in Kansas City, Missouri, signed up for unemployment compensation last week after the city shut down dine-in restaurants. She is hoping the extra $600 will help her ride out the shutdown instead of having to look for another job.

“It has eased my mind so much,” she said. “I do not have to actively go out and expose myself to the public and possibly get sick. I can stay home now and do my part in social distancing.”

Many recently unemployed workers have reported frustrations with jammed phone lines and overloaded websites as they try to apply for unemployment benefits, however.