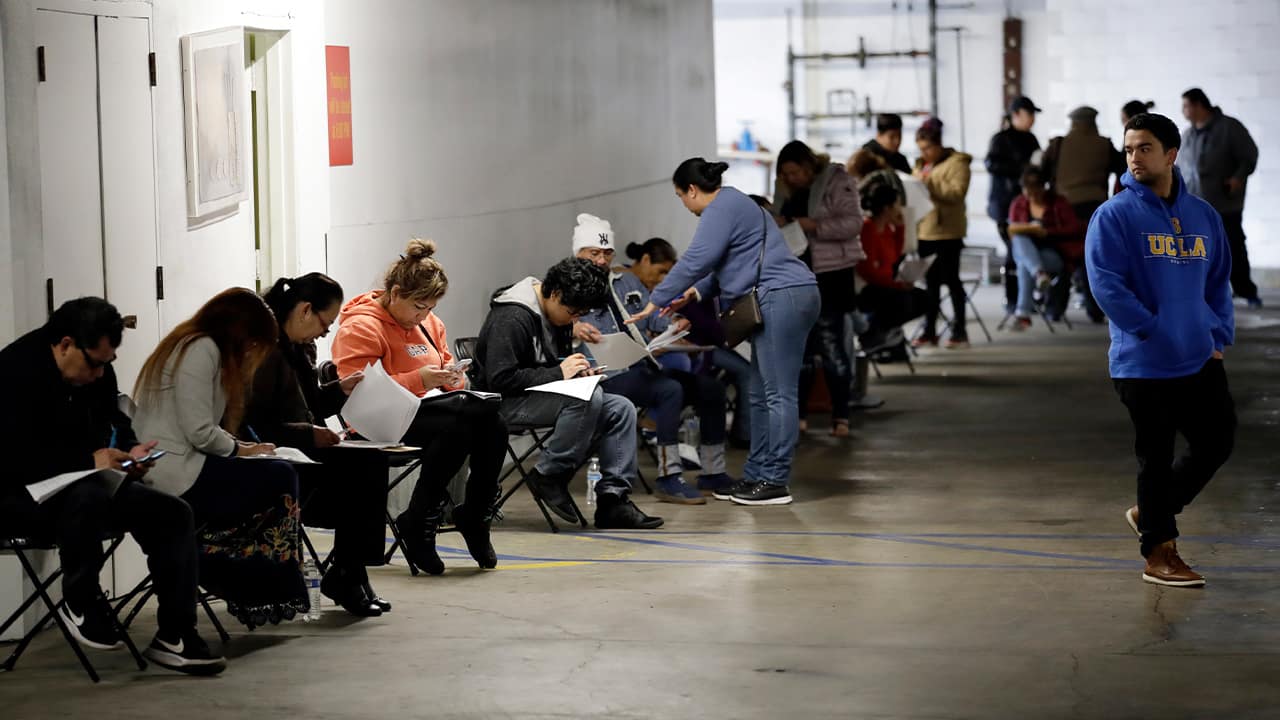 WASHINGTON — More than 6.6 million Americans applied for unemployment benefits last week — doubling a record high set just one week earlier — a sign that layoffs are accelerating in the midst of the coronavirus outbreak.

Combined with last week’s report that 3.3 million people sought unemployment aid two weeks ago, the U.S. economy has now suffered nearly 10 million layoffs in just the past few weeks — far exceeding the figure for any corresponding period on record.

“This kind of upending of the labor market in such a short time is unheard of.” — Heidi Shierholz, an economist at the Economic Policy Institute, a progressive think tank

The stunning report Thursday from the Labor Department showed that job cuts are mounting against the backdrop of economies in the United States and abroad that have almost certainly sunk into a severe recession as businesses have shut down across the world.

“This kind of upending of the labor market in such a short time is unheard of,” said Heidi Shierholz, an economist at the Economic Policy Institute, a progressive think tank.

Further signs of a surging wave of layoffs are likely in the coming weeks. Seth Carpenter, an economist at Swiss bank UBS, estimates that about one-third of last week’s claims had been delayed from the previous week, when state offices that handle unemployment benefits were overwhelmed by a surge of online and telephone claims. Yet many of those offices are still struggling to process all the claims they have received, suggesting more claims will be pushed into the following week.

The magnitude of the layoffs has led many economists to envision as many as 20 million lost jobs by the end of April. That would be more than double the 8.7 million jobs lost during the Great Recession. The unemployment rate could spike to as high as 15% this month, above the previous record of 10.8% set during a deep recession in 1982.

Roughly 90% of the U.S. Population Under Stay-At-Home Orders

Employers are slashing their payrolls to try to stay afloat because their revenue has collapsed, especially at restaurants, hotels, gyms, movie theaters and other venues that depend on face-to-face interaction. Auto sales have sunk, and factories have closed.

Roughly 90% of the U.S. population is now under stay-at-home orders, which have been imposed by most U.S. states. This trend has intensified pressure on businesses, most of which face rent, loans and other bills that must be paid.

The reversal in the job market has been dizzying. Four weeks ago, weekly unemployment claims amounted to only 211,000, near a 50-year low. Since then, they have jumped 30-fold.

“Four years of jobs gains have evaporated in the span of two weeks,” said Daniel Zhao, an economist at the jobs website Glassdoor.

Requests for jobless aid soared in all 50 states last week. In California, nearly 900,000 people sought benefits, almost four times the previous week’s figure, and equivalent to 5% of the state’s workforce.

How long the waves of layoffs last — an unknown — will be a key factor in determining the depth of the recession. Some companies are maintaining ties to laid-off workers, in hopes of rehiring them once the coronavirus outbreak passes. Relatively swift rehirings would help the economy rebound quickly. But if business shutdowns persist into the late summer or fall, many smaller businesses will likely go bankrupt. That would make it harder for workers to find jobs and would prolong the downturn. 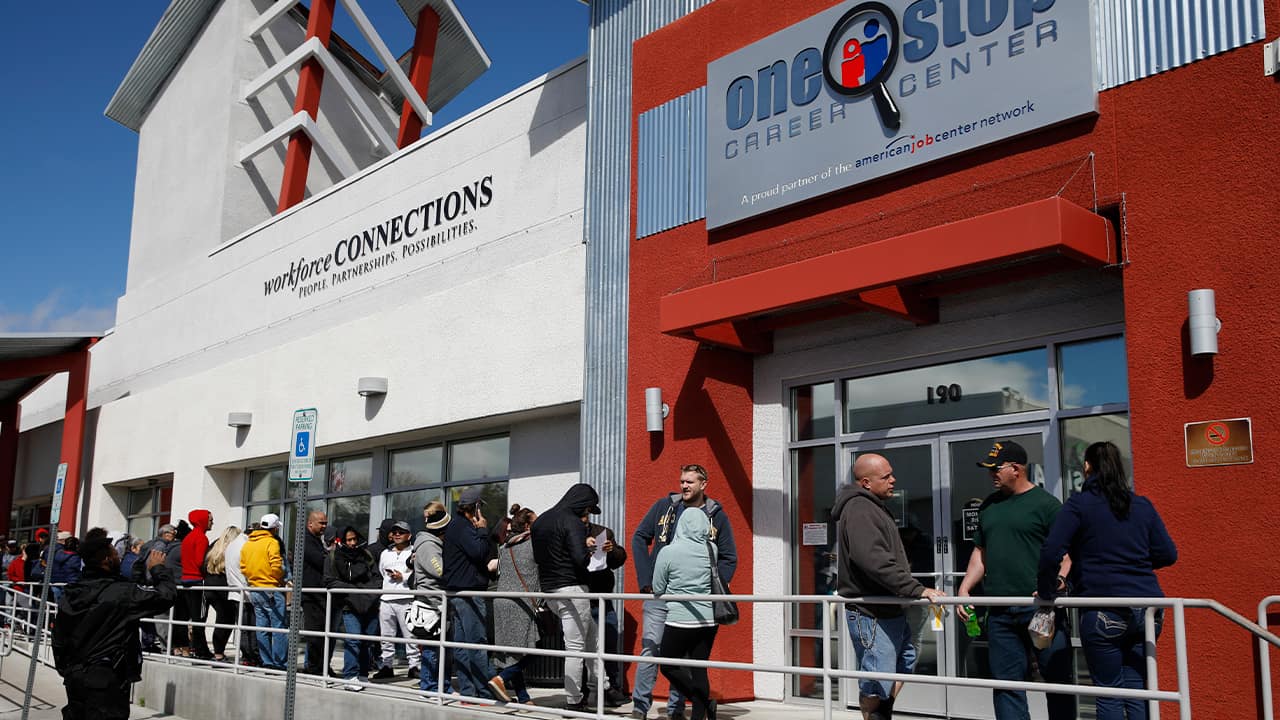 FILE – In this March 17, 2020 file photo, people wait in line for help with unemployment benefits at the One-Stop Career Center in Las Vegas. A record-high number of people applied for unemployment benefits last week as layoffs engulfed the United States in the face of a near-total economic shutdown caused by the coronavirus. The surge in weekly applications for benefits far exceeded the previous record set in 1982. (AP Photo/John Locher, File)

The $2.2 trillion rescue package that was signed into law last week includes $350 billion in small business loans that can be forgiven if the companies use the money to retain or rehire workers. This provision could help limit future layoffs or lead some companies to recall employees back to work.

“The huge volume of new claims suggests that at least some states are being as inclusive and expansive as possible in defining who qualifies. That’s important.” — Rebecca Dixon, executive director of the National Employment Law Project

“The program is unprecedented, generous and ambitious and could be successful,” said Luke Tilley, chief economist at Wilmington Trust. “That said, it is challenging to roll out quickly.”

The economic rescue package also added $600 a week in jobless aid, on top of what recipients receive from their states. This will enable many lower-income workers to manage their expenses and even increase their purchasing power and support the economy.

It also makes many more people eligible for jobless aid, including the self-employed, contractors, and so-called “gig economy” workers such as Uber and Lyft drivers.

Those reforms are crucial at a time when most economic activity has come to a standstill, advocates for low-income workers say.

“The huge volume of new claims suggests that at least some states are being as inclusive and expansive as possible in defining who qualifies,” said Rebecca Dixon, executive director of the National Employment Law Project. “That’s important.”

Kathryn Lickteig, a cook in Kansas City, signed up for unemployment compensation last week after the city shut down dine-in restaurants. She is hopeful that the extra $600 will help her ride out the shutdown instead of having to look for an interim job.

State Unemployment Agencies Struggle to Keep up With Flood of Applications

“It has eased my mind so much,” she said. “I do not have to actively go out and expose myself to the public and possibly get sick. I can stay home now and do my part in social distancing.”

The legislation will also help fund unemployment benefits for workers whose hours have been cut. That would enable these people to replace some of their lost income with unemployment aid even as they keep their jobs.

Typically, people who receive jobless aid are required to actively look for a new job and to document their searches. But Congress has passed other legislation that encourages states to drop that requirement, given that so many businesses are closed, and most Americans have been ordered to stay mostly at home.

On Friday, the government will issue the March jobs report, which economists forecast will show a loss of 145,000 jobs. That report is based on data gathered mostly before the spike in layoffs began two weeks ago. Though relatively small, that loss would still end a record-long 113-month streak of job growth.

Numerous state unemployment agencies have struggled to keep up with the flood of applications for jobless benefits. New York’s Labor Department, for example, asks people to file on different days depending on their last names. Monday, for example, is reserved for those last names that start with A through F.