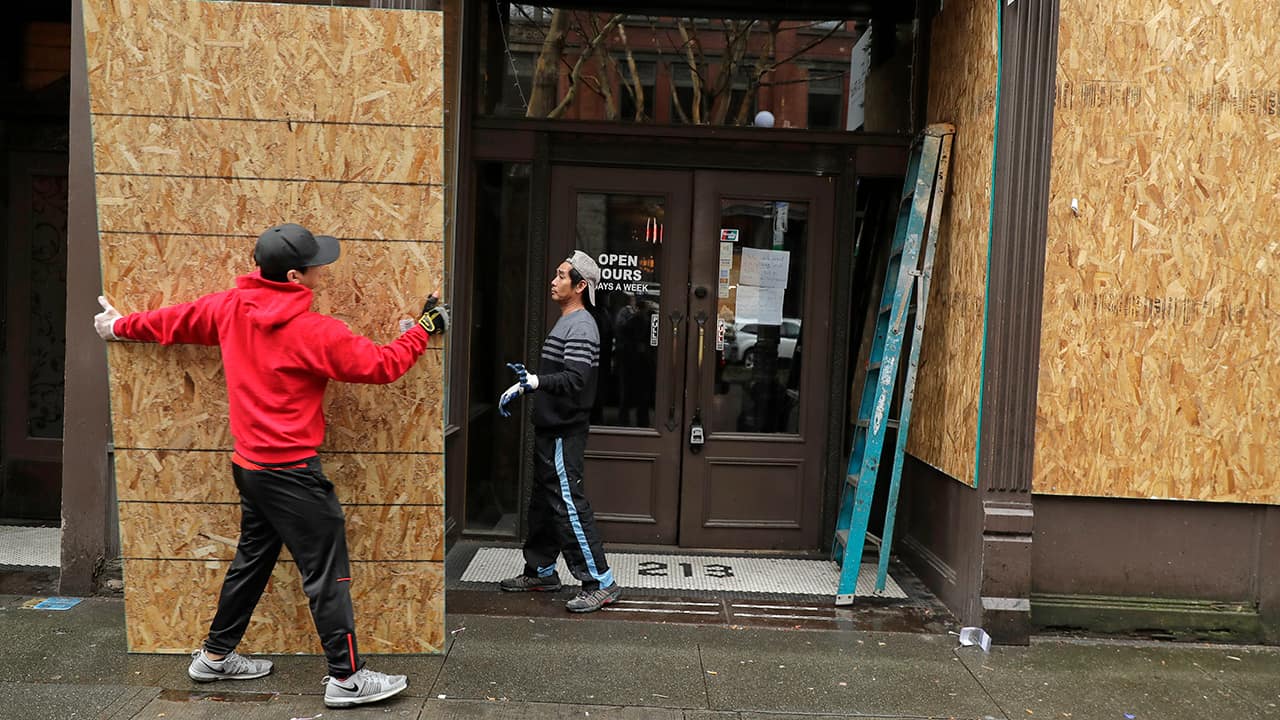 Britain’s health service is asking airline cabin crew who have been laid off to go to work in temporary new hospitals being built to treat COVID-19 patients. The National Health Service says easyJet and Virgin Atlantic are writing to thousands of staff — especially those with first aid training — asking them to work at hospitals being built inside convention centers in London, Birmingham and Manchester. Those who sign up will perform support roles under the supervision of doctors and nurses. In this Thursday, March 26, 2020 photo, A.J. Davidson, who works in the business development department at Blue Delta Jeans, packages face guards made at the jeans manufacturing site in Shannon, Miss. The company has shifted its operation from making custom jeans to help with the demand of face masks to combat the coronavirus outbreak. The new coronavirus causes mild or moderate symptoms for most people, but for some, especially older adults and people with existing health problems, it can cause more severe illness or death. (AP Photo/Julio Cortez)

Macy’s will stop paying tens of thousands of employees who were thrown out of work when the chain closed its stores in response to collapsing sales during the pandemic. The majority of its 130,000 employees, including stock people and sales clerks, will still collect health benefits, but the company said that it is transitioning to an “absolute minimum workforce” needed to maintain basic operations.
Rent the Runway confirmed that it laid off its entire retail staff and is not sure whether stores will reopen. The layoffs were announced via video conference on Friday, the company said. Workers will be getting severance and two months of health insurance. It’s unknown how many employees will be affected. The company’s online subscription service continues. The job cuts were first reported by online news website Verge.
Gannett, the country’s largest newspaper publisher, is cutting pay and hours of newsroom employees by 25% in April, May and June because of advertising declines. Executives are getting a pay cut of 25%.

U.S. restaurant sales dropped 36% in the week ending March 22, according to consulting firm The NPD Group, with about 94% of restaurants operating under some restrictions that week.


U.S. restaurant sales dropped 36% in the week ending March 22, according to consulting firm The NPD Group, with about 94% of restaurants operating under some restrictions that week.
Dine-in restaurants like Olive Garden and Applebee’s reported sales declines of 71% compared to the same period last year. Fast food sales fell 34%.
To draw more customers, Restaurant Brands International — the parent company of Burger King, Popeyes and Tim Hortons — said it’s expanding delivery in the U.S. and Canada and adding curbside pickup to its mobile app for truckers or walk-up customers who can’t use the drive-thru windows. The Toronto-based company also said it’s mailing 15,000 thermometers to its restaurants so employees can be checked before they begin their shifts.
Meanwhile, OpenTable — an app that normally lets diners make reservations at 60,000 restaurants worldwide — is getting into the grocery business. Starting this week, OpenTable will let people reserve a time to shop at several California groceries, including Belcampo Meat Co. OpenTable says it’s making the technology available for free to groceries and other retailers.

Ford is repurposing an auto parts factory west of Detroit to start building simple ventilators to treat coronavirus patients.
The automaker says that starting the week of April 20, it expects to produce 50,000 ventilators in 100 days. The plant in Ypsilanti Township, Michigan, would have the ability to build 30,000 per month after that.
Ford also is working with GE Healthcare to quickly double production of a more sophisticated ventilator at a factory in Madison, Wisconsin.
The ventilators to be built in Michigan are a designed by Airon Corp. Ford says they work on air pressure, not electricity, and can handle the needs of most COVID-19 patients. Volunteer workers in a clothing factory manufacturing firefighting gear, pose for a photo as they make hospital gowns for medical staff to protect them from the coronavirus, in Arnedo, northern Spain, Monday, March 30, 2020. The new coronavirus causes mild or moderate symptoms for most people, but for some, especially older adults and people with existing health problems, it can cause more severe illness or death. (AP Photo/Alvaro Barrientos)

Hotels are bracing for a colossal drop in revenue this year. STR and Tourism Economics — two data firms — forecast revenue declines of 51% per available hotel room.


Hotels are bracing for a colossal drop in revenue this year. STR and Tourism Economics — two data firms — forecast revenue declines of 51% per available hotel room.
Revenue per available room is a key industry statistic; it grew for 10 years straight before reaching a record of $86.76 in 2019.
The American Hotel and Lodging Association estimates that by Tuesday half of all U.S. hotels will have closed, affecting 1.6 million jobs.
Marriott International — the world’s biggest hotel chain — has furloughed about two-thirds of its 4,000 corporate employees. Hilton plans furloughs or reduced hours for much of its corporate staff starting next week.
Airbnb, which has also seen a sharp drop-off in business, pledged Monday to offer more financial help to the hosts of its 7 million listings. Airbnb will pay hosts 25% of what they would have earned if a guest cancels a reservation between March 14 and May 31. It estimated the program will cost $250 million. Hosts were angered earlier this month when Airbnb announced guests could cancel their stays without any penalty. Airbnb also said it is creating a $10 million fund for some of its best hosts and experience providers to help them pay rent or mortgages.

Johnson & Johnson expects to begin human clinical studies of its “lead vaccine candidate” no later than September. The company said the first batches of a COVID-19 vaccine could be available for emergency use in early 2021.
Shares of Abbott Laboratories jumped more than 6% Monday in the first day of trading since announcing that the Food and Drug Administration had approved its test for the detection of the novel coronavirus. Abbott’s portable ID NOW platform can produce positive test results in as little as five minutes, and negative results in 13 minutes. The tests are expected to be available next week and the company says it will ramp up manufacturing to deliver 50,000 per day.

Stocks pushed higher on Wall Street, led by big gains for health care companies announcing developments that could aid in the coronavirus outbreak. Monday’s rally tacked more gains onto a recent upswing for the market, which is coming off the best week for the S&P 500 since hitting bottom after the financial crisis. It was a different story in energy markets, where a barrel of U.S. crude plunged below $20 per barrel.

Facebook is investing an additional $100 million in local journalism to support reporting on the pandemic. Emergency grant funding of $25 million will go to local news through the Facebook Journalism Project and another $75 million will be devoted to media marketing. Facebook, which has a rocky relationship with the media industry, has already committed $300 million to journalism organizations.
One of Florida’s largest newspapers, meanwhile, announced Monday that it would temporarily change it’s print frequency to two days a week. The Tampa Bay Times, which is based in St. Petersburg, said it will deliver newspapers to homes on Wednesdays and Sundays, the paper’s largest circulation days.

Related Topics:coronavirusEconomyglobal economy
Up Next