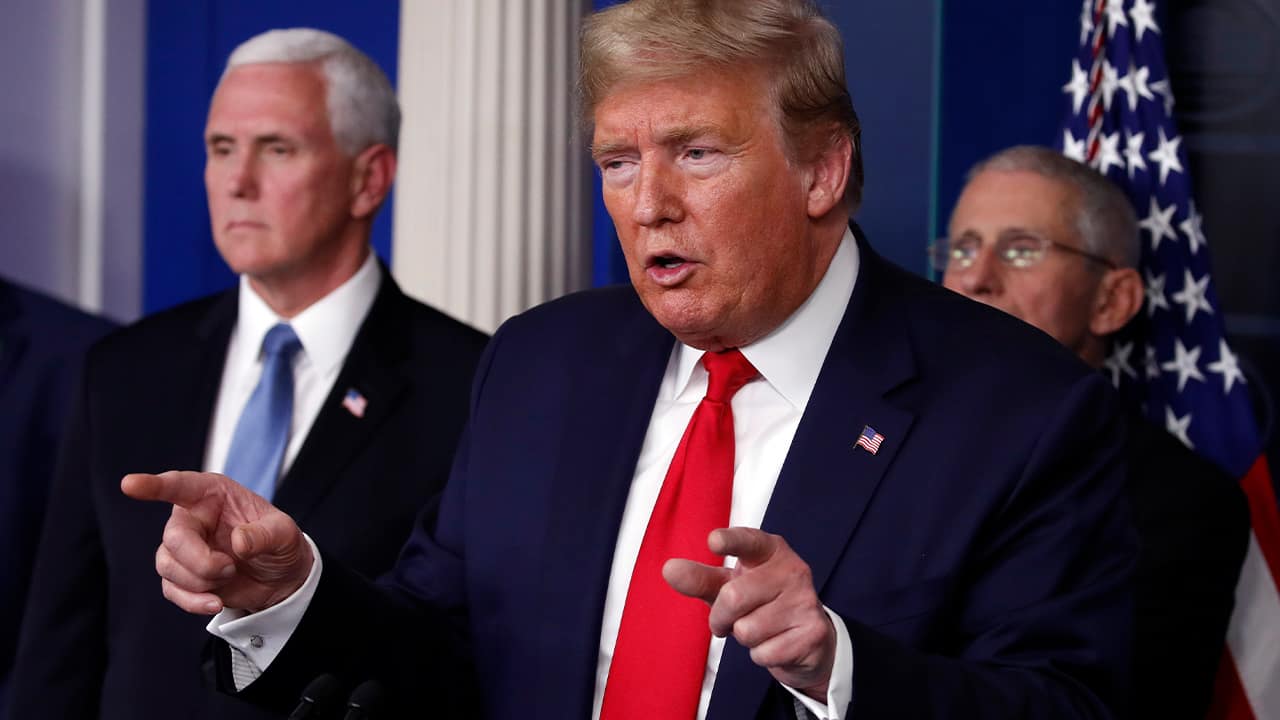 DETROIT — President Donald Trump issued an order Friday that seeks to force General Motors to produce ventilators for coronavirus patients under the Defense Production Act.
Trump said negotiations with General Motors had been productive, “but our fight against the virus is too urgent to allow the give-and-take of the contracting process to continue to run its normal course.”
Trump said “GM was wasting time” and said his actions will help ensure the quick production of ventilators that will save American lives.
Previously Trump has been reluctant to use the act to force businesses to contribute to the coronavirus fight, and wasn’t clear what triggered his order against GM.
The Detroit automaker is farthest along in the effort to make more of the critical breathing machines. It’s working with Ventec Life Systems, a small Seattle-area ventilator maker to increase the company’s production and repurpose a GM auto electronics plant in Kokomo, Indiana, to make the machines. The company said Friday it could build 10,000 ventilators per month starting in April with potential to make even more.
After Trump invoked the act, GM said in a statement that it has been working around the clock for more than a week with Ventec and parts suppliers to build more ventilators. The company said its commitment to build Ventec’s ventilators “has never wavered.”
Trump said that while the White House activated the act against GM, it may not be needed. “Maybe we won’t even need the full activation. We’ll find out,” Trump said Friday in the Oval office.

The move appears aimed at price and volume negotiations with the government. But it’s Ventec, not GM, that is talking with the government, said Chris Brooks, Ventec’s chief strategy officer.
Ventec ventilators, which are portable and can handle intensive care patients, cost about $18,000 each, Brooks said. That’s much cheaper than the more sophisticated ventilators used by hospitals that can cost up to $50,000, he said.
The Federal Emergency Management Agency has made multiple requests since Sunday for estimates of how many ventilators it can build at what price, and has not settled on any numbers, according to Brooks. That could slow Ventec’s efforts to ramp up production because it doesn’t know how many breathing machines it must build, he said.
Trump’s action came just after a series of tweets attacking GM, alleging that the company promised to build thousands more breathing machines than it can deliver for coronavirus patients and that it wants too much money for them.
“As usual with ‘this’ General Motors, things just never seem to work out,” Trump wrote on Twitter, adding that the company promised 40,000 ventilators quickly but now says it will build only 6,000 in late April. Trump also tweeted that Ford should start making ventilators fast.
The move escalated a feud involving the president, GM, several governors and medical experts over the severity of the crisis and just how many ventilators will be needed to handle it.

Experts say the U.S. is hundreds of thousands of breathing machines short of what it likely will need to treat a rapidly rising number of COVID-19 patients. New York, Michigan, Louisiana and the state of Washington have been singled out as virus hot spots in the U.S.
The series of tweets came just hours after Trump, during a Fox News interview Thursday night, said he had “a feeling” that the number of ventilators being requested to handle the virus was too high. GM said it is offering resources to Ventec “at cost.”
In the Fox interview, Trump questioned whether the number of ventilators requested by hospitals was exaggerated: “I have a feeling that a lot of the numbers that are being said in some areas are just bigger than they’re going to be,” Trump said.
“I don’t believe you need 40,000 or 30,000 ventilators,” he continued. “You know, you’re going to major hospitals sometimes, they’ll have two ventilators. And now, all of a sudden, they’re saying, ‘can we order 30,000 ventilators?’”
His remarks contradicted medical experts and apparently were aimed at New York Gov. Andrew Cuomo, who has been pleading for 30,000 more ventilators to handle an expected surge in critical virus patients during the next three weeks.
“When the president says the state of New York doesn’t need 30,000 ventilators, with all due respect to him, he’s not looking at the facts of this astronomical growth of this crisis,” said New York City’s mayor Bill de Blasio on ABC’s “Good Morning America.”