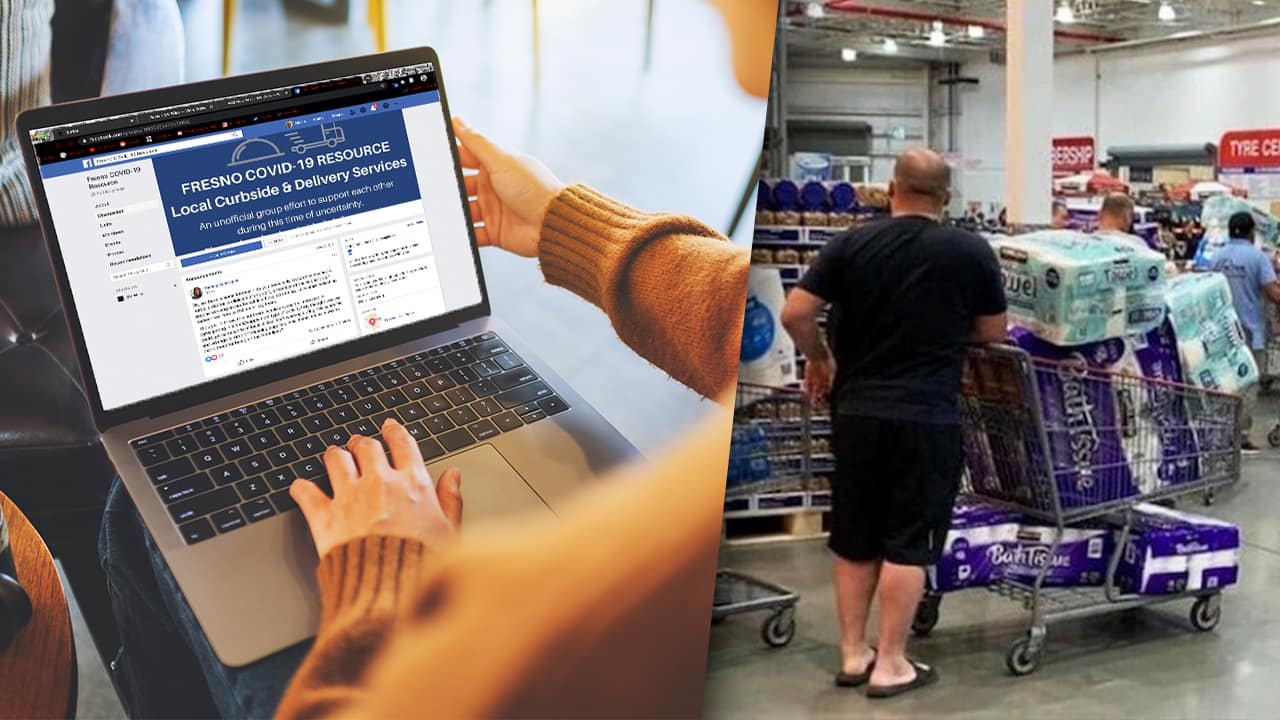 Want to know which Fresno or Clovis stores have toilet paper or Clorox wipes right now, and which restaurants have curbside service? There’s a Facebook group for that.

After Mykel Suntrapak created the Facebook group, the pair proceeded to invite all their local friends, who then invited their friends, and soon word of the resource group was spreading like, well, COVID-19 — but this time, as a force for good.
As of Wednesday morning the group had more than 6,000 members who are sharing things like free online yoga lessons, difficulties in getting unemployment benefits applications started, and even how to find free movies through your Fresno County Public Library membership (Kanopy).
It’s not the only new arrival on the social networking scene, which is exploding with options as people cope with the abnormal that is the New Normal.


“At a time where we need community more than ever, but we’re not able to get that in the physical sense, I think that social media provides us the opportunity to get that in the virtual sense.” — Fresno State professor Betsy Hays
Other recent COVID-19-related groups on Facebook include Fresno/Clovis Takeout 411-Small Business, Fresno Coronavirus Community Support, and Families surviving Coronavirus together!

The rapid expansion of Facebook groups prompted by the COVID-19 pandemic doesn’t surprise Betsy Hays, chairwoman of Fresno State’s Department of Media, Communications, and Journalism.
“At a time where we need community more than ever, but we’re not able to get that in the physical sense, I think that social media provides us the opportunity to get that in the virtual sense,” she said.
Hays said she believes Facebook groups will continue to grow and could be the future of Facebook, because they are easy to create and target their audiences.
“You’re able to find like-minded and like-interested individuals, regardless of where they live … the exact best use of social is really being amplified in these groups,” she said.
Groups like Fresno COVID-19 Resource are attracting attention and rapidly growing in membership because community members are looking for help to meet similar needs, and that help is coming from other community members, Hays said.

Not only has the group’s membership skyrocketed, so have the types of topics posted.
Restaurants are posting that they’re open for curbside customers, and in some cases, they’re offering up “pantry boxes” with chicken, eggs, and other basic cooking foodstuffs — and the much sought-after toilet paper.
Auto repair shops are offering to come to people’s homes to pick up a vehicle needing repair and then bring it back.
Other members have used the page to share up-to-date information about the inventory of stores they’ve just visited, and whether that inventory included TP, hand sanitizer, distilled water, or Clorox wipes — the Big Four.
Suntrapak has noticed that supplies in stores appear to be returning to normal, based on posts to the Facebook page. Likewise, delivery services are not as backlogged as they were a few days to a week ago, she said.
“I was noticing for at least a week that Instacart had no available deliveries for my area,” said Suntrapak, who is staying close to her northwest Fresno home because she has an immune-compromised system. “Finally, I was able to get a date.”

And the posts also include real-time reports on what members have seen at stores.
One member posted Tuesday morning that at the Costco store on Abby Street in north Fresno, “100s of seniors lined up. On top of each other.” That was just before 8 a.m. when the store was opening to seniors only, something that Costco is doing on Tuesdays and Thursdays from 8 a.m. to 9 a.m.
Meanwhile, a Winco employee posted that her store has added blue tape on the floor near the checkout stands to mark out the six feet recommend for social distancing.
After one woman posted a request for help in buying groceries because she has immunological health issues and needs to remain isolated at home, a vast number of people stepped up, some offering to take her shopping list to the store and others pointing her to resources she could use for grocery deliveries.
“I thought that was amazing,” Tammy Suntrapak said.

Other Social Networks in Play

In addition to Facebook groups, the Next Door social networking app is a way for larger neighborhoods to communicate and stay in touch.
On Sonja Dosti’s block in northwest Fresno, an email chain shares daily updates. Dosti, the spokeswoman for Central Unified School District, also shares information through her church’s social network.
Her big seek? Rubbing alcohol. She had called a Rite-Aid store, learned when the next shipment was due, and got to the store at what she thought was an early-enough hour — just in time to buy the last bottle.