NEW YORK — At first, Jonathon Seidl wasn’t worried about the coronavirus despite his anxiety disorder. But that changed.

The pandemic is worrisome enough for most people. For those with anxiety disorders, it presents a special challenge, especially if they are not receiving treatment.

The 33-year-old digital media strategist from Dallas, who takes medication, said his concern was less about getting sick than about the battering the economy could sustain. Would he be able to feed his family? Would there be a run on food stores? He could not shake his worries.

So he paced. His heart raced. He wanted to go to bed early “because sleep was the only respite.” But his sleep was rarely restful. “I would wake up during the night,” he said.

The pandemic is worrisome enough for most people. For those with anxiety disorders, it presents a special challenge, especially if they are not receiving treatment.

That’s the case for about two-thirds of people with anxiety disorders, says Dr. Bruce Schwartz, president of the American Psychiatric Association. “Those are the ones I’m worried about,” he said.

Schwartz, who maintains a practice in New York, said those who are in treatment “do pretty well” in the face of the pandemic.

Still, some psychologists say the have noticed an uptick in symptoms with the spread of the virus. And for some anxiety conditions, the recommendations from health officials can appear to feed the problem. People who fear interacting with others now hear advice to avoid crowds. People with obsessive-compulsive disorder who fear germs so much they wash their hands excessively now hear public health authorities encouraging frequent hand-washing.

Standard treatments can deal with coronavirus fears in people who already had anxiety troubles, helping them to avoid emotional extremes, psychologists say. The goal is accepting an appropriate level of anxiety and living with some uncertainty.

“You don’t have to like that any of this is happening to accept that this is our reality right now,” said Vaile Wright, director of clinical research and quality at the American Psychological Association. People can focus on what’s under their control, she said, like how to work from home or manage the kids with schools closed.

Mary Alvord, a psychologist in Rockville, Maryland, said she sees increased anxiety in people whose fear of picking up germs drives them to rituals to ease that fear. Public health messages about cleaning surfaces and washing hands can make some patients think “we were right all along,” Alvord said.

So “we have to really deal with reality checks,” she said. People with an anxiety disorder tend to focus on “what-if” ideas and worst-case scenarios more than what is going on in the present, she said. “That’s what we’re trying to get under control.” 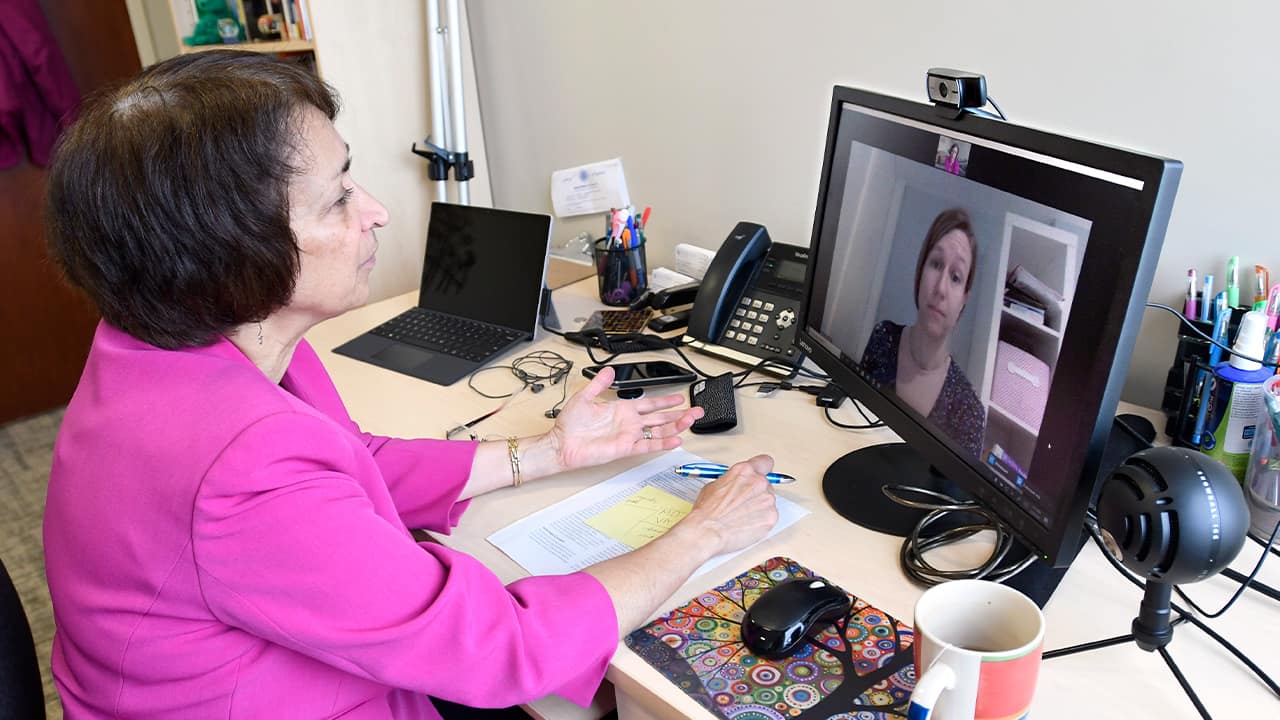 Psychologist Mary Alvord, left, holds a video conference with her colleague, psychologist Veronica Raggi, whom she had scheduled to meet in person, in Chevy Chase, Md., Wednesday, March 18, 2020. For people with anxiety disorders, the coronavirus outbreak presents a new set of worries to deal with, psychologists say. (AP Photo/Steve Ruark)

It’s tricky to get people with obsessive-compulsive behavior to focus on taking reasonable precautions without fueling their condition, said Neda Gould, associate director of an anxiety clinic at the Johns Hopkins Bayview Medical Center in Baltimore. A mental health provider can help them set goals and limits, she said, while techniques for relaxation and meditation can help “turn off that heightened anxiety or stress response … or at least to turn it down.”

Somebody with obsessive-compulsive disorder might be encouraged to touch some surface they fear is contaminated, and then not wash their hands for 20 minutes, and even then for only the recommended 20 seconds rather than five minutes with scalding-hot water, Wright said.

For people apprehensive about dealing with others, the public health advice about avoiding groups also makes therapy challenging, Gould said. The key thing is to stay connected to other people, and that can be done by social media, email, video conferencing or phone calls, she said.

Alvord, in fact, said she avoids the term “social distancing” and instead talks about “physical distancing and social connectedness.” That allows for connecting online, she said.

It can be hard for anxiety-prone people to reach out when they feel overwhelmed, Wright said, so other people should put in the effort to contact them, just to ask how they’re doing. “There’s nothing wrong in talking about the virus in a productive way,” encouraging people to take care of themselves physically and emotionally without inducing panic and destructive riffs of “what-if,” she said.

And it’s OK to contact friends and family “and talk not at all about the virus right now,” she said. “We need that too. We need a balance.”

Research Shows Internet Therapy Can Be as Effective as In Person

Schwartz recommends that people staying home limit the amount of time spent listening to the news, which includes not leaving it on in the background. And he suggests staying busy with projects like cleaning closets and drawers and cooking with one’s family, as well as getting outdoors for walks.

Research shows internet therapy can be as effective as doing in in person, Alvord said. But “it’s different than having somebody in the office,” she said. “I only see you from the waist up … I don’t see you walking. I don’t see all the full range of gestures.”

Alvord, who directs 18 therapists in two offices, said her practice, like many others, has moved its patients to online contact. She noted that thousands of psychologists signed up for her recent webinar on practicing psychology remotely in the pandemic age.

In her case, the shift was promoted both by people anxious about showing up in person and the practice’s own precautions for a caseload that could land 50 people in a waiting room on a Saturday morning.

Research shows internet therapy can be as effective as doing in in person, Alvord said. But “it’s different than having somebody in the office,” she said. “I only see you from the waist up … I don’t see you walking. I don’t see all the full range of gestures.”

Gould said she recently moved all her sessions to telephone or videoconferencing, including group sessions. The goal is to help people like Seidl, who says he has found some solace in thinking about life after the outbreak.