NEW YORK — The drive-in theater, long a dwindling nostalgia act in a multiplex world, is experiencing a momentary return to prominence.

“Obviously this isn’t the way you’d want it to occur, but I’m excited for the idea that there may be a new generation of people that will get to experience going to a drive-in theater and — I was going to say catch the bug. Maybe some other turn of phrase.” — Andrew Thomas, owner of Showboat Drive-In Theater

With nearly all of the nation’s movie theaters shuttered due to the coronavirus pandemic, some drive-in owners think they’re in a unique position to give moviegoers a chance to do something out of the house while keeping distance from others. This weekend, some drive-ins aren’t the only show in town. They’re the only show in the country.

The Showboat Drive-In Theater in Hockley, Texas, about a 30-minute drive outside Houston, normally sees ticket sales go down about 40% on a weekend when they don’t have any new movies. Last weekend, they saw a 40% increase, says the theater’s owner, Andrew Thomas. Usually open weekends, Thomas has kept screenings going through the week.

“Obviously this isn’t the way you’d want it to occur, but I’m excited for the idea that there may be a new generation of people that will get to experience going to a drive-in theater and — I was going to say catch the bug,” said Thomas, laughing. “Maybe some other turn of phrase.”

There are just over 300 drive-ins left in the country. They constitute a small, oft-forgotten flicker in today’s movie ecosystem that hardly competes with the megawatt glare of the megaplex and the nation’s 5,500 indoor theaters. But through decades of disruption and change in American life, they have managed to survive. They’ve somehow clung to life as relics of past Americana only to find themselves, for a brief moment anyway, uniquely suited to today.

Drive-Ins Aren’t Without Their Own Virus Concerns

Not many drive-ins are open. It’s a seasonal business to begin with, with many drive-ins not planning to open until April. John Vincent, president of the United Drive-in Theater Owner Association, estimates about 5-10% were open as of last weekend, and some of those are closing due to the pandemic. In states like California and New York, restrictions on movement and gathering are being ramped up that mandate closures. As infections rise in other parts of the country, Vincent suspects the drive-in’s window is already closing.

“We’d love the drive-ins to shine but this is probably not the moment,” said Vincent, who owns Wellfleet Cinemas on Cape Cod.

However long it lasts, the drive-in is for now, in certain parts of the country, one of the only remaining refuges of public entertainment — of getting out the house to do something while still staying inside your car. At the Paramount Drive-in near Los Angeles, Forrest and Erin McBride figured a drive-in movie was one of the only ways they could responsibly celebrate their anniversary.

“We were like, what can we do? Everything’s closed,” said Forrest before a showing of “Onward” on Thursday night. “We were like, ‘Well, a drive-in theater is kind of like a self-quarantined movie date.’”

Aman Patel, a 25-year-old from Los Angeles, attended his first drive-in with his roommate and friends. “I always wanted to do it,” said Patel.

Drive-ins aren’t without their own virus concerns. Concessions and restrooms, in particular, still pose issues. All owners interviewed for this article said they were spacing out cars, reworking how customers could order food (sometimes via text messages) and limiting restroom occupancy. 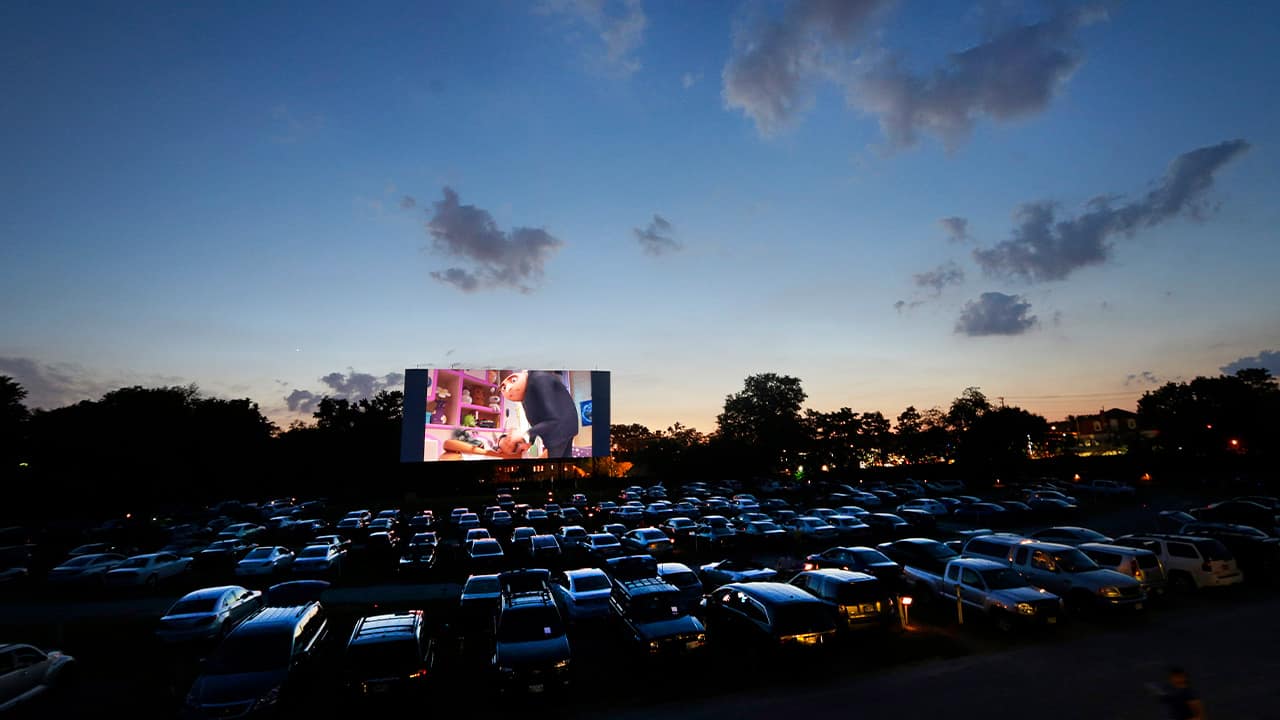 FILE – In this July 26, 2013 file photo, patrons watch a movie as the sun sets over Bengies Drive-In Theatre in Middle River, Md. The drive-in theater, long a dwindling nostalgia act in a multiplex world, is experiencing a momentary return to prominence. With nearly all of the nation’s movie theaters shuttered due to the pandemic, some drive-ins are the only show in town. (AP Photo/Patrick Semansky, File)

Concern That Too Many People Could Show up This Weekend

Chris Curtis, owner of the Blue Moon Drive-in in Guin, Alabama, said he was doing something that has long been anathema to drive-ins: allowing outside food and drink in. “In fact, we suggest it,” reads the Blue Moon’s Facebook page. Like indoor theaters, drive-ins make their money almost entirely by concessions.

“We’re just trying to pay the power bill and the water bill and get through this, and give the community something to do at a time when there’s not a whole lot to do. It’s not about the movies anymore. It’s about having something to do.” — Chris Curtis, owner of the Blue Moon Drive-in

“We’re just trying to pay the power bill and the water bill and get through this, and give the community something to do at a time when there’s not a whole lot to do,” said Curtis, who’s owned the Blue Moon for 24 years. “It’s not about the movies anymore. It’s about having something to do.”

Curtis is concerned that too many people could show up this weekend, given the responses he’s gotten. To keep the Blue Moon uncrowded, Curtis launched online ticketing for the first time. “I don’t want people driving from long distances just to see that we’re sold out,” he said.

There are few movies left for drive-ins to play. For now, they can still screen recent releases like “Onward” and “The Hunt,” but those movies are already available on various digital platforms as studios have funneled their films to homes due to the virus. Earlier this week, all of the nation’s movie chains shuttered following federal guidelines that urged against gatherings of more than 10 people. The studios have cleared out their release calendars into May.

Those postponements have extended all the way to major summer releases, including Marvel’s “Black Widow” (previously slated for May 1). Eating into spring releases will be hard enough for drive-ins, but summer is when they sell most of their tickets. Owners say that if they manage to remain open in the coming weeks, they could potentially play older films (though those cost almost as much as new releases to play).

Drive-Ins Could Also Improvise in Other Ways

“We don’t know how long we’re going to have to live this way,” said Thomas. “Everybody’s wrestling with what it is going to be like in the middle of the summer when normally everyone is high-fiving and having a good time because the box office is going crazy. It’s when you go: This is why I got into this business.”

Drive-ins could also improvise in other ways. Lisa Boaz, who with her husband has operated the Monetta Drive-in in Monetta, South Carolina, since 1999, said they’ve been contacted by churches interested in using the drive-in for Sunday services. Parishioners would listen to sermons from their cars through the drive-in’s FM-radio transmitters.

Boaz said they had opened the Monetta earlier in March, hopeful for a good year. They have stacks of souvenir cups with “2020 season” printed on them. She’s not sure how long the Monetta will stay open, and — like other owners — said she would be quick to follow any state-ordered shelter-in-place guidelines. Deciding just to open this weekend, she said, was difficult. And she’s worried that other drive-ins won’t be able to withstand a few dark months.

But so long as it’s safe, Boaz appreciates the irony that in the year 2020, the best — and in many cases only — way to see a movie outside the house is at the drive-in. The pandemic hasn’t proven the supremacy of streaming as much as it’s shown how indomitable the urge is to spend a night at the movies.

“It is kind of nice that we’re getting a little bit of extra attention. Maybe people don’t want to stay inside as much as they thought they did,” said Boaz. “The old ways are the best ways.”