Calling it “a very momentous day,” Superintendent Bob Nelson announced Friday that Fresno Unified schools will close Monday and remain closed until April 14 in an effort to diminish the spread of the COVID-19 coronavirus.

Nelson, flanked by school board president Keisha Thomas and trustees Claudia Cazares, Veva Islas, and Carol Mills, said the decision to close schools was not made lightly, and school officials are well aware of the impacts on families.

“We don’t want our kids to be afraid. In Fresno, the last thing we need is for our kids to be scared. And when you start hearing stories that kids are scared to come to school, you need to be present with that.” — superintendent Bob Nelson

Many of the district’s 73,000 students are becoming increasingly aware of the coronavirus and the serious health threat it presents, he said.

“It’s never happened that we’ve closed schools, up and down the state of California. This is a completely new uncharted territory,” he said. “And at a time when our community has a high degree of anxiety, it’s gut-wrenching.

“We don’t want our kids to be afraid. In Fresno, the last thing we need is for our kids to be scared. And when you start hearing stories that kids are scared to come to school, you need to be present with that.” 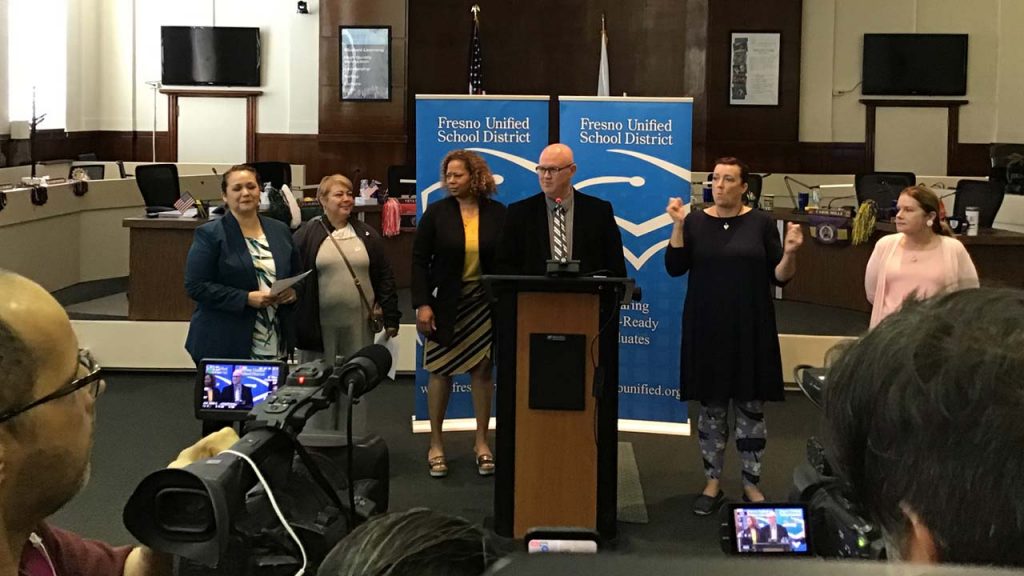 The mid-afternoon news conference in the Fresno Unified’s headquarters downtown came only a day after Nelson and four other area school superintendents stood with Jim Yovino, Fresno County Schools superintendent, to talk about weighing the impacts of keeping schools open versus closing them.

“We have reason to believe that now that testing is going to increase across the Valley that we will see a J-shaped increase in the number of COVID-19 positive individuals, including children potentially.” — superintendent Bob Nelson

Nelson acknowledged Friday that so far only one person in Fresno County has tested positive for the virus, and that person picked up the infection on a cruise ship, not within the community.

But with the impending increase of testing, Nelson said, officials expect a rapid increase in the number of people who test positive for the virus, which is highly contagious and potentially fatal for people who have underlying health problems or who are older.

Keeping a lid on the number of new cases, especially those requiring hospitalization, will help keep the region’s healthcare systems from being overloaded, to the point of being unable to treat some seriously ill people.

“We have reason to believe that now that testing is going to increase across the Valley, that we will see a J-shaped increase in the number of COVID-19 positive individuals, including children potentially,” he said.

So the school closings are necessary for the sake of the community’s health, Nelson said.

Todd Suntrapak, president and CEO of Valley Children’s Healthcare, said school leaders like Nelson who decided to cancel in-person classes and close schools have made the right decision.

“The actions of these educational leaders speak directly to their bold leadership, to their commitment to keeping our children, students and their families safe, and to their commitment to act in the interest of the greater community good,” Suntrapak said in a statement. “Valley Children’s stands beside these community leaders in their actions today and we are committed to do all we can to help keep our children safe during these unprecedented times.”

Suntrapak said that as of Friday there were no cases of the COVID-19 coronavirus in the Valley Children’s Healthcare system. He said families need to protect themselves from this virus and others by practicing good health habits, including thorough hand-washing, not touching your face with unwashed hands, and avoiding close contact with people who are sick.

As we work through the details related to today’s unprecedented announcement to close schools as a result of COVID-19, Fresno Unified has established a call center for parents and employees. pic.twitter.com/QrNyzu12fp

The district will be in touch with families through the weekend to provide information about how students can continue to receive the free breakfasts and lunches that they usually get at school, and a call center will be set up to answer questions and concerns, he said.

Related Story: Coronavirus Won’t Stop Free School Meals — Even If Schools Have To

Nelson said Fresno Unified’s decision to close schools comes the same day that several of the state’s other largest districts made the same decision, in an effort to “flatten the curve” of new coronavirus cases. Those decisions, as well as Fresno State’s closure of classes on campus, were weighed as the district formulated its plan, he said.

The Fresno Teachers Association issued a statement Friday urging the district to close the schools to keep students as well as staff safe. The FTA also local and state leaders to clearly communicate how workers and families can apply for unemployment and disability benefits while they stay home with their children.

While schools will be closed to students, maintenance workers will be continuing to clean the facilities and all the district’s employees will still be on the payroll, Nelson said.

He urged parents to make sure that students remain isolated and don’t gather in large groups, which would defeat efforts to maintain social distancing — and which is why schools are being closed in the first place

Trustees Were Polled By Nelson

Trustee Terry Slatic, who represents the Bullard High School region, told GV Wire about the news conference. He said that superintendent Bob Nelson polled trustees of the state’s third-largest school district on whether to continue classes or cancel them.

“I said that I supported the decision to close as of today,” Slatic said.

Nelson said in a text to trustees that he expected other school districts in Fresno and Madera counties to follow Fresno Unified’s lead.

“We have reason to believe (that) Covid-19 cases are going to come out of Valley Children’s (Hospital) and we do not want to be open when that occurs,” Nelson also wrote in the text.

Fresno Unified is on spring break April 6 through April 13.

More than 1 million public, private and parochial school students in California will be home from school in the coming weeks to avoid the pandemic.

The Los Angeles schools will close for two weeks, although superintendent Austin Beutner indicated at a news conference it could extend beyond that. San Diego said it would keep schools closed until April 6.

“We will see what happens,” Beutner said. “The facts and the circumstances will tell us.”

By Monday, one-third of California’s 6 million public school students will kept out of the classroom, as schools look to limit the risks, according to state officials.