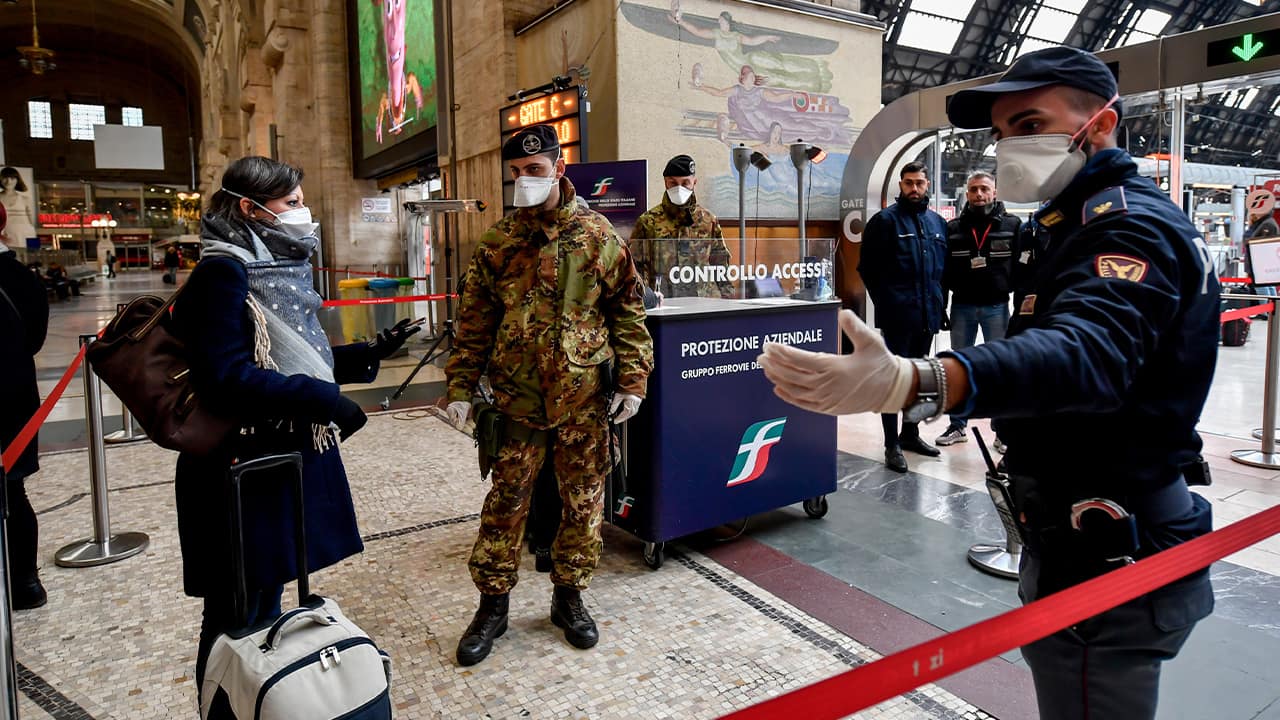 SOAVE, Italy — Fear over the new coronavirus epidemic sent global stock markets and oil prices plunging Monday, touched off prison riots in Italy and caused a cascading shutdown of sites and events ranging from Saudi schools to a Holocaust march.
While many of Beijing’s white-collar workers returned to work as new infections subsided in China, some 16 million people under a widespread lockdown in northern Italy struggled to navigate the new rules of their mass isolation. Army soldiers spray disinfectant as a precaution against a new coronavirus at an apartment building in Daegu, South Korea, Monday, March 9, 2020. The world’s largest economies delivered more worrisome cues Monday as anxiety over the virus outbreak sent stock and oil prices plunging around the world. (Kim Ju-sung/Yonhap via AP)

Trying to Send a Message of Confidence in the Economy

Italy’s financial hub, Milan, and the popular tourist city of Venice were among the places under the quarantine lockdown. Across Italy, museums and archaeological sites were closed, weddings were canceled and restaurants were told to keep patrons a meter (more than 3 feet) apart. The country has counted 7,375 cases of COVID-19 virus and 366 deaths, more than any other country outside of Asia.
Pope Francis celebrated Mass by himself Monday at the Vatican hotel where he lives, live-streaming the event, but he did resume some meetings.
Trying to send a message of confidence in the economy, French President Emmanuel Macron and his wife walked on Paris’ famous Champs-Elysees avenue, but kept a one-meter security distance from passersby. “I’m shaking hands using my heart,” he said, as he waved to people from a distance.
He called for a proportionate government response.
“We cannot shut down the country but we need to protect the most fragile people,” he said.
China’s slow re-emergence from weeks of extreme travel restrictions offers a grim sense of the longer-term effects the virus can have on a country’s economy.
“Our business is one-fifth of what it was before,” said Cheng Sheng, who helps run a stand in Beijing that sells sausages and noodles. “There’s much less foot traffic. There are no people.”
Infections were reported in more than half the world’s countries, and flashpoints were erupting around the globe.

Buses and Planes Were Ready to Whisk the More Than 2,000 Passengers to Military Bases

“We are working for valuable time, time in which scientists can research medicines and a vaccine” and in which governments can help stock up on protective equipment, said German Chancellor Angela Merkel, whose country has reported over 1,000 cases but not yet any deaths.


“We are working for valuable time, time in which scientists can research medicines and a vaccine  [and in which governments can help stock up on protective equipment].” — German Chancellor Angela Merkel, whose country has reported over 1,000 cases but not yet any deaths
In Iran, state television said the virus had killed another 43 people, pushing the official toll up to 237, with 7,161 confirmed cases. But many fear the scope of illness is far wider there.
In the United States, where more than 500 infections have been reported, the Grand Princess cruise ship, which has at least 21 confirmed virus cases, was expected to dock in Oakland, California, amid elaborate protective procedures.
Fleets of buses and planes were ready to whisk the more than 2,000 passengers to military bases or their home countries for a 14-day quarantine.
In Florida, passengers disembarked from the Regal Princess after it received clearance to dock. Two crew members eyed as possible carriers had negative tests for the virus.
The Caribbean Princess cruise ship, meanwhile, cut short a Fort Lauderdale-Mexico cruise because crew members had been on another ship where people were infected.
In Washington, the Capitol’s attending physician’s office said “several” members of Congress had contact with a person who attended a recent political conference and subsequently developed COVID-19, the illness caused by the new coronavirus. They “remain in good health,” the office said. Two members of Congress, Sen. Ted Cruz and Rep. Paul Gosar, said they are isolating themselves after determining they had contact with the person.


Related Story: Homeless at 'Double Risk' of Getting, Spreading Coronavirus Empty shelves are seen at a supermarket in Paris, Monday, March 9, 2020. Global share markets have plunged as panicked investors fled to the safety of bonds and the yen to hedge the economic trauma of the coronavirus, while oil plunged more than 30 per cent after Saudi Arabia opened the taps in a price war with Russia.(AP Photo/Michel Euler)

China Reported 40 New Cases of the Virus Monday, Its Lowest Number Since Jan. 20

Countries around the world showed a willingness to take tough steps to try to stop the virus’ spread.
After earlier closing off its land borders, Saudi Arabia cut off air and sea travel to and from Bahrain, Egypt, Iraq, Italy, Kuwait, Lebanon, South Korea, Syria and the United Arab Emirates. All Saudi schools and universities closed beginning Monday.
Qatar cut off travel to 15 countries and announced it would shut down schools and universities beginning Tuesday.
The Czech Republic banned visits to hospitals and retirement homes and began random checks on vehicles arriving at border crossings, including taking the temperatures of occupants.
Organizers of the annual Holocaust remembrance march in southern Poland postponed the event this year due to coronavirus fears, and soccer authorities announced that at least four major matches — in France, Germany and Spain — would take place with no fans.
China reported 40 new cases of the virus Monday, its lowest number since Jan. 20. More than three-quarters of the country’s surviving virus patients have been released from treatment. South Korea reported 165 more cases Monday, bringing its total to 7,478.
Albania and Brunei announced their first cases of COVID-19, and the president of the Philippines declared a public health emergency.


Related Story: Thousands Prepare to Get Off Ship Hit by Virus in Oakland