SALEM, Ore. — They often don’t have places to wash their hands, struggle with health problems and crowd together in grimy camps.

That’s what makes homeless people particularly vulnerable to the coronavirus. Almost 200,000 people live in those conditions in the United States, according to a White House report, with Washington state, California and Oregon among the states most affected by homelessness as income inequality grows and housing costs rise.

“They are double risk. One is a risk to themselves, the other is a risk to society.” — Chunhuei Chi, director of the Center for Global Health at Oregon State University in Corvallis

And — in a possible recipe for disaster — the new virus has hit hardest on the West Coast, where nearly all of the nation’s deaths have occurred. Health officials have not yet reported coronavirus outbreaks among homeless populations, but tuberculosis and other diseases have swept through them in the past, underscoring their vulnerability.

Yet few communities that are trying to contain the spread of the COVID-19 virus have rolled out plans to protect the homeless and give them a place to recover in isolation, which would prevent them from passing it on.

“They are double risk. One is a risk to themselves, the other is a risk to society,” said Chunhuei Chi, director of the Center for Global Health at Oregon State University in Corvallis.

King County, which includes Seattle and has seen most of the deaths in the U.S., is one of the few places that’s taken action: installing more than a dozen module units where infected homeless people can recover, some on county-owned land flanked by apartment buildings. The units, roughly the size of a mobile home that accommodate several people, were previously used by oil workers in Texas. County officials also bought a motel where coronavirus patients can recover in isolation.

That approach needs to be replicated in many more places, said Chi, who has been closely following the global outbreak that originated in China.

“This should be treated as an emergency policy, not as a permanent solution to homelessness, but more of framing it as a solution for containing the spread,” Chi said. 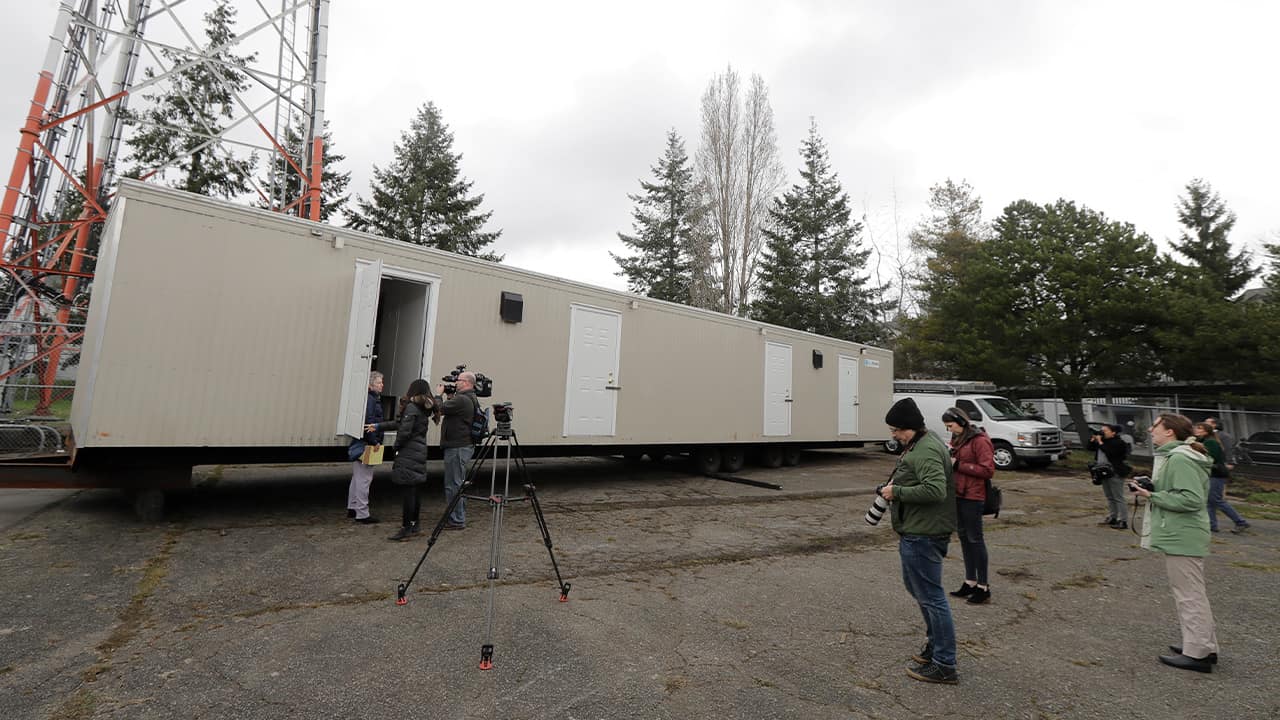 Reporters and photographers work Tuesday, March 3, 2020, at the site in South Seattle where King County will be placing several temporary housing units like the one shown here to house patients undergoing treatment and isolation in response to the COVID-19 coronavirus. (AP Photo/Ted S. Warren)

San Francisco says it’s developing a plan to protect the homeless from the virus but hasn’t released details yet. A cruise ship believed to be a breeding ground for more than 10 cases has been lingering off the coast of the city.

San Francisco postponed an event Thursday at a major arena that was to provide community services for the homeless. It typically draws up to 1,000 people and was delayed to reduce the risk of exposing the homeless population to coronavirus “because they are older as a group and typically have multiple chronic medical conditions,” the city said in a statement.

Farther south, in Los Angeles County, the health department is sending teams to over 300 homeless facilities to ensure people are washing their hands and not sharing food or utensils, department director Barbara Ferrer said. She’s urging shelters to prepare large spaces to isolate those who may become sick.

Health officials in the nation’s most populous county also are planning for a possible large-scale quarantine of homeless people in case the virus spreads, and will deploy street teams to work with those living in encampments to get people with symptoms treated.

Ferrer noted that health officials tell people to stay home when they’re sick, to wash their hands often and call their doctors with concerns.

“My heart goes out to the fact that they live in conditions that make it almost impossible for them,” she said of the homeless Friday.

In Oregon’s capital city, where a makeshift homeless camp has sprouted up on downtown Salem sidewalks, an agency that aids the homeless is bringing in hand-washing stations.

Homeless are More Vulnerable Because So Many Have Underlying Health Conditions

A homeless man in a long gray coat who was walking along a sidewalk in Salem said he is not particularly worried about the coronavirus.

Still, the man, who would only give his first name, Alex, and his age, 33, asked what areas it had spread to and how quickly it progresses in an infected person.

“I thought it could have been quarantined over in China maybe and didn’t know how much it would spread before they had it all figured out,” he said.

Instead of being more vulnerable to the virus, he thought younger homeless people might be better able to fight it off.

“Their immune systems have already been tested more than most people,” Alex said. “In general, I would think they might be less susceptible, unless it’s an elderly homeless person.”

Experts, though, say the homeless are more vulnerable because so many have underlying health conditions. So did many patients who have died.

Jones, the homeless advocate, said hepatitis C, heart disease and diabetes are prevalent among many of the 1,400 people who sleep on the streets, in cars or abandoned buildings, or in the woods and fields in Salem.

“If they get this particular virus, there’s a high degree of probability it’s going to impact them more severely than it does the general population, with a higher mortality,” Jones said.