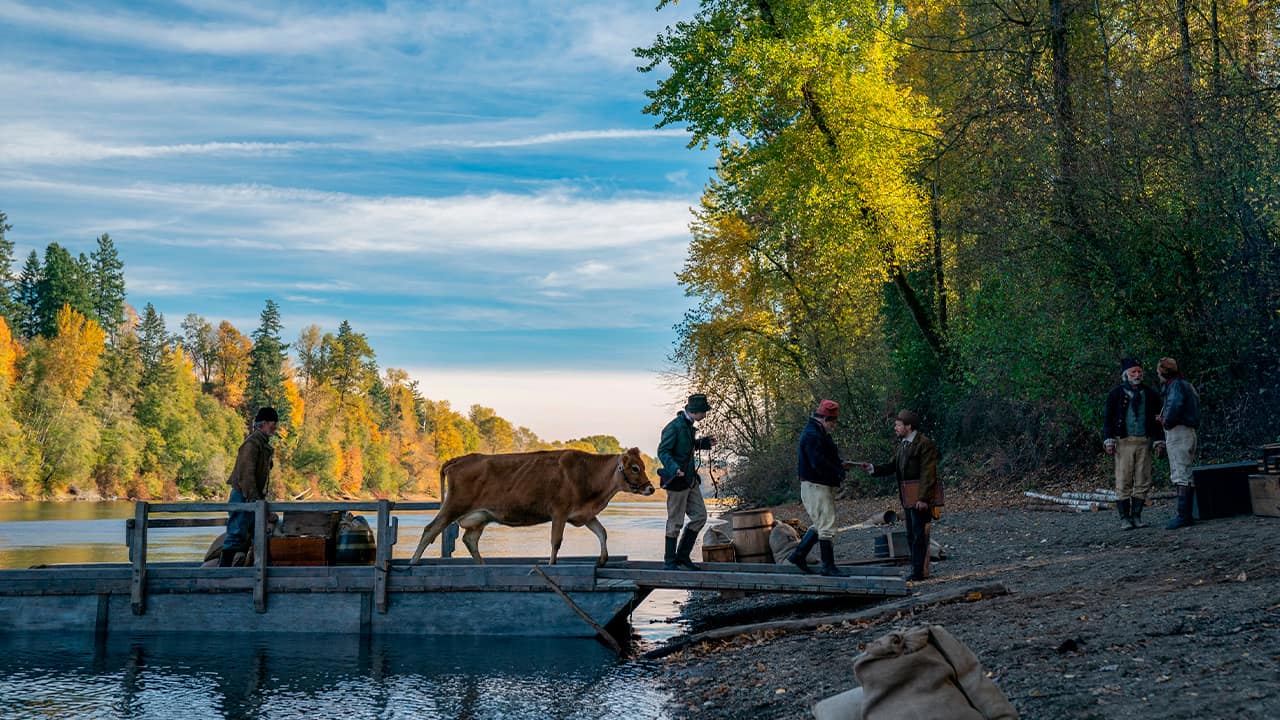 The American West is about as well-trod territory as there is in movies, but Kelly Reichardt keeps unearthing new treasures.
Her latest excavation, “First Cow,” is her most sublime yet. Like many of Reichardt’s previous films, it’s set in Oregon but in a seemingly unremarkable in-between moment in history. It’s a tale literally dug up. In its opening scenes, a contemporary woman and her dog are walking near a broad river where an oil tanker slowly glides past. The dog sniffs something first, then the woman sets to clawing the dirt away. This image released by A24 Films shows John Magaro in a scene from “First Cow.” (Allyson Riggs/A24 Films via AP)

Her find can only be mysterious to her; it reveals nothing for posterity or science. Just some eternal truths, and one achingly lovely yarn that reaches, through time and cinema, to today. “First Cow” leaps back to the Oregon Territory of the 1820s, where a pair of aimless and impoverished travelers are brought together by circumstance, kindness and baked goods.
Otis, known as “Cookie” (John Magaro), is a cook for a band of trappers who gruffly order him around. Shortly before coming to a sparsely populated trading post, he encounters King-Lu (Orion Lee), a Chinese immigrant who, having been sought for murder, Cookie finds cowering naked behind a fern.
They have an immediate rapport, and recognize in each other fellow low rungs on the already forming ladder of society. When they later encounter each other at the trading post, a tender, unspoken friendship develops between them. King-Lu invites Cookie, a shy and guileless grown orphan soulfully played by Magaro, to drink a bottle at their shack. Once there, Cookie sweetly begins to sweep the place and add a few flowers. It’s as beautiful a beginning to a friendship as you’re likely to see this side of “Casablanca.”
Friendship is indeed what “First Cow,” a simple and radiant Old West fable, is about. The movie opens with a quote from William Blake about its indispensable and homely place in life: “The bird a nest, the spider a web, man friendship.” But as a portrait of human connection, “First Cow” is situated within the rugged terrain of capitalism, even the rough and ill-formed variety found 200 years ago in the Pacific Northwest.
King-Lu, the sharper schemer of the two, senses an opportunity. “History isn’t here yet,” he says. “It’s coming but maybe this time we can take it on our own terms.” The tragedy of “First Cow” is that it has, in fact, already arrived, and any momentary window of opportunity and freedom is fast closing for Cookie and King-Lu. This image released by A24 Films shows John Magaro in a scene from “First Cow.” (Allyson Riggs/A24 Films via AP)

The Joys of ‘First Cow’ Are Many

Ordered by the area’s local official (Toby Jones), the territory’s first bovine (Evie, in the credits) arrives on a raft while onlookers gawk. The force of history has been heralded by many sounds before — a railroad whistle, for instance. But I can’t recall it ever before arriving with a “moo.” One man jokes that the cow is no more suitable to the Oregon frontier than the white man.

Related Topics:filmOld West
Up Next