Specialty Drinks in a Vault: Inside Election Night Party 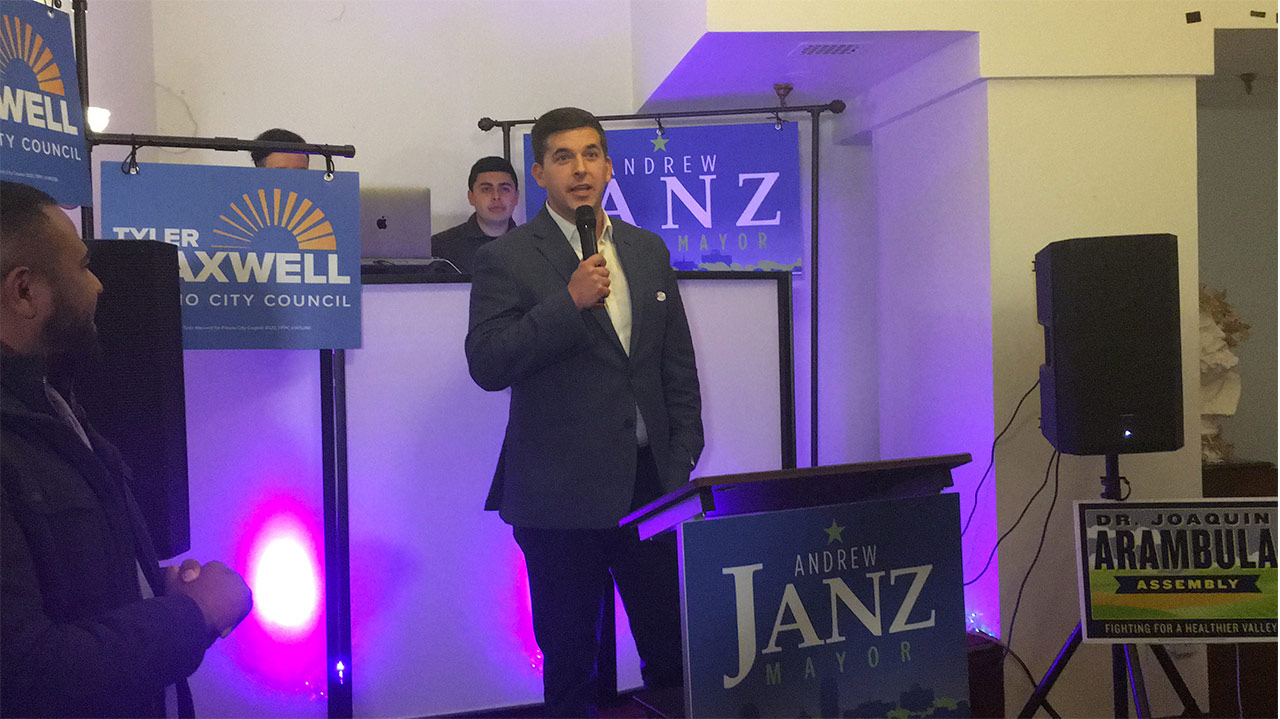 Progressives packed a party celebrating election night returns Tuesday for Andrew Janz for Fresno mayor and Tyler Maxwell for city council District 4.
At The Vault inside the iconic Pacific Southwest building, hundreds partied for an apparent Election Night split decision — Maxwell was winning his race, while Janz was trailing.

As the Fresno County clerk updated numbers, Maxwell maintained a consistent lead over Nathan Alonzo of about 6 percentage points.
Janz continually trailed Jerry Dyer, but the county prosecutor chipped away at the retired police chief’s initial 59% share of the vote with each subsequent return. After day one counting, Dyer leads 54%-36%. If Dyer falls below 50%, there will be a November run-off.

His wife, Heather, and newborn daughter, Wilhelmina, preceded Janz to the party by hours. He didn’t show up until after 10 p.m., even though partygoers arrived before 8 p.m.
Janz took the stage and thanked Assemblyman Joaquin Arambula and his wife, Elizabeth, for their support.
Arambula’s parents, Juan and Amy, funded an independent expenditure campaign that attacked Dyer.
After carrying a serious demeanor during the campaign, Janz appeared relaxed and grateful. He also expressed optimism that despite the numbers, the election may carry on through November.
“We know many young people, people of color voted today,” Janz said. “There is a chance for the numbers could move. Look, we need to get Jerry under 50%. There is no question about that. I think there is an opportunity for that to happen.”

Thank you to all of our amazing volunteers and supporters! Tens of thousands of ballots are still being counted! We anticipate the voters will send this race to a runoff in November! We’re told next ballot update from Fresno County will be on Friday! #FresnoForward -AJ Lessons Learned in the Campaign

Mounting his second major campaign in a row, Janz said running for mayor was much different than his 2018 bruising battle for Congress against Devin Nunes (R-Tulare). While Nunes won, Janz came closer than any Nunes opponent. The combined fundraising total ranked near the top of any race that year.
“In this race, Jerry and I kept an open line of communications behind the scenes. I think, for the most part, it helped create a very clean campaign,” Janz said.
Notwithstanding the independent money in the race, Janz is proud both candidates ran a clean slate.
“I think it was helpful for me and Jerry to talk whenever there was an issue,” Janz said. He said the both condemned any attack on the other’s signs or property. “When you keep open lines of communication, it creates a cleaner campaign.”

The party’s host, councilman Nelson Esparza, read the preliminary election results shortly after 8 p.m. Maxwell addressed the crowd, brimming with confidence.
“The next ten years of this city go to the working class. This is not a victory for Tyler Maxwell. This is a victory for the working-class people, the city of Fresno, the working poor, the middle class, the disenfranchised, the disabled … the have nots. The next ten years go to you,” Maxwell said.
“This is just the beginning. The next ten years is ours. Everyone knows the power resides in the city council. We finally have a supermajority. All I have to say for now is, hold onto your seats Fresno, because things are going to start moving really fast,” Maxwell said.
One partygoer noted this wasn’t a Janz/Maxwell party: “This is Tyler’s party.”
Maxwell shook hands, posed for pictures, and generally wore a smile on his face as the night wore on and his lead maintained with each update.

“The next ten years of this city go to the working class. This is not a victory for Tyler Maxwell. This is a victory for the working-class people, the city of Fresno, the working poor, the middle class, the disenfranchised, the disabled … the have nots. The next ten years go to you.” — Tyler Maxwell
Others in the Valley’s progressive movement were there. Kingsburg councilwoman Jewel Hurtado rolled through. So did community activists Stacy Williams, Brian Bobbitt, and Yas Mendoza.
Fresno County Democratic Party Chairman Andy Hansen-Smith, as well as former chair Michael Evans, (now working at the state party level) chatted with the likes of labor leader Dillon Savory.

The Janz and The Maxwell

An interesting feature of The Vault is that it contains a literal vault, remnants of the building’s history as a banking center.
Others enjoyed specialty drinks created for the candidates. The Janz mixed gin, lavender, lemon, and honey. The Maxwell contained tequila with the soft drink Squirt. A bucket of Modelo, soft drinks, and water catered to those who didn’t favor a sour flavor to their drinks.

At @JanzAndrew party at The Vault in the Pacific Southwest building. A drink in his honor. pic.twitter.com/EbySyT0qXw