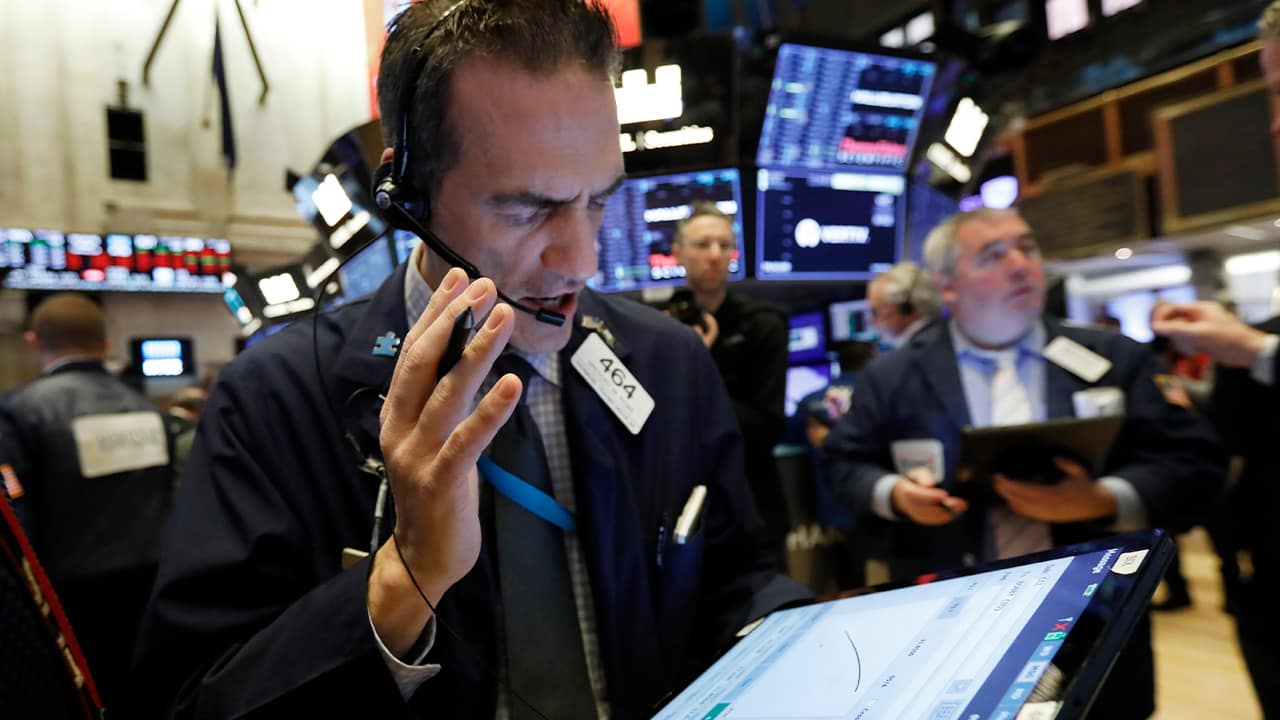 NEW YORK — U.S. stocks fell sharply Friday and were on track for their worst week since October 2008 as the spreading coronavirus threatens to derail the global economy.
The virus outbreak has been shutting down industrial centers, emptying shops and severely crimping travel all over the world. More companies are warning investors that their finances will take a hit because of disruptions to supply chains and sales. Governments are taking increasingly drastic measures as they scramble to contain the virus.
The Dow Jones Industrial Average fell 650 points, or 2.5%, to 25,038 as of 11:48 a.m. It was down as many as 1,085 points earlier.
The S&P 500 lost 2.1% and the Nasdaq fell 1.4%. China’s benchmark index fell 3.7% and Germany’s DAX fell 3.9%.
The benchmark S&P 500 index has now lost 14% since hitting a record high just 10 days ago. The rout has knocked every major index into what market watchers call a “correction,” or a fall of 10% or more from a peak. The last time that occurred was in late 2018, as a tariff war with China was escalating. Market watchers have said for months that stocks were heavily overpriced and long overdue for another pullback.
Bond prices soared again as investors sought safety and became more pessimistic about the economy’s prospects. That pushed yields to more record lows. The yield on the 10-year Treasury note fell sharply, to 1.16% from 1.30% late Thursday. That yield is a benchmark for home mortgages and many other kinds of loans.
Crude oil prices slumped 5.1% over worries that global travel and shipping will be severely crimped and hurt demand for energy. The price of benchmark U.S. crude has now fallen 16% this week.

“All this says to us is that there are still a lot of worries in the market,” said Gene Goldman, chief investment officer at Cetera Financial Group. “We need the Fed to come out and say basically guys, we got your back.”


“All this says to us is that there are still a lot of worries in the market. We need the Fed to come out and say basically guys, we got your back.” — Gene Goldman, chief investment officer at Cetera Financial Group
Traders have been growing increasingly certain that the Federal Reserve will be forced to cut interest rates to protect the economy, and soon. Goldman said the Fed’s current lack of action amounts to a tightening of rates compared with other nations and their actions to offset the impact of the coronavirus.
The weeklong market sell-off follows months of uncertainty about the spread of the virus, which hit China in December and shut down large swaths of that nation by January. China is still the hardest hit country and has most of the 83,000 cases worldwide and related deaths.
Uncertainty turned into fear as the virus started jumping to places outside of the epicenter and dashed hopes for containment.
Airlines and cruise operators have suffered some of the worst hits as flight routes are cancelled, along with travel plans. Big names like Apple and Budweiser brewer AB InBev are part of a growing list of companies expecting financial pain from the virus. Dell and athletic-wear company Columbia Sportswear are the latest companies expecting an impact to their bottom lines.
A big concern investors have is that the stock market rout could have a psychological effect on consumers, making them reluctant to spend money and go to crowded places like stores, restaurants and movie theaters.
The late-2018 stock market plunge, for instance, derailed holiday sales that year. Now, analysts are worried that the latest stock swoon could cause consumer spending — which makes up some 70% of the economy and has played a huge role in keeping the U.S. expansion going — to contract again.

Many Companies Face the Prospect of Crimped Financial Results

Craig Johnson, president of Customer Growth Partners, a consumer consultancy, says he had expected annual retail sales to be up 4.1%, but he now says it could increase just 2.2% if the impact of the new virus in China persists beyond April.
‘’This is a moving target right now,”’ he said. ‘’There is a lot of uncertainty.’’
Nitin Jain, managing director of the retail practice at AlixPartners, said that while sales of everyday items like canned goods and medical supplies could increase in the short term, sales of luxury goods could tail off as high-end shoppers become nervous.
Many companies face the prospect of crimped financial results with their stocks already trading at high levels relative to their earnings. Before the virus worries exploded, investors had been pushing stocks higher on expectations that strong profit growth was set to resume for companies after declining for most of 2019. If profit growth doesn’t ramp up this year, that makes a highly priced stock market even more vulnerable.
Nearly 60 nations representing every continent, except Antarctica, have confirmed cases. The virus outbreak has prompted a wide range of reactions from nations hoping to contain its spread and economic impact.
The Geneva auto show was cancelled as Swiss authorities banned large events of more than 1,000 people. Parts of Italy’s northern industrial and financial center remain under quarantine. Japan is preparing to close schools nationwide. The U.S. is preparing for the virus after a case unrelated to travel was confirmed in California.

Related Topics:Chinacoronavirusstock market
Up Next

Lawmaker Aims to Strip Cap on Freelancer Assignments in California