SEOUL, South Korea — The U.S. and South Korean militaries, used to being on guard for threats from North Korea, face a new and formidable enemy that could hurt battle readiness: a virus spreading around the world that has infected more than 1,200 people in South Korea.

“In the military, soldiers are living as a group. So even if just one person contracts the virus at his base, its aftermath would be really tremendous. This year, no military training can be the best option.” — Kim Dae-young, an analyst at the Korea Research Institute for National Strategy

As the new coronavirus, which was first found in China, has begun to sweep through South Korea, soldiers stationed in close quarters on bases throughout the country are at particular risk. Already 20 South Korean soldiers and one American have tested positive.

In response the allies are taking aggressive measures to guard against a viral outbreak and are even considering curtailing a key joint military exercise, something experts say is inevitable because if the virus were to spread through the ranks it could significantly weaken their ability to fight if necessary.

“In the military, soldiers are living as a group. So even if just one person contracts the virus at his base, its aftermath would be really tremendous,” said Kim Dae-young, an analyst at the Korea Research Institute for National Strategy. “This year, no military training can be the best option.”

The virus has infected more than 80,000 people worldwide, mostly in China, though over the past week South Korea has become the second-worst affected country after an outbreak centered in the southeast around its fourth-largest city, Daegu.

Related Story: CDC Warns It Expects Coronavirus to Spread in US

South Korea boasts a 600,000-strong military, while the U.S. stations 28,500 troops in the country largely as a deterrent to possible North Korean aggression. Daegu, with a population of about 2.5 million people, is near four American bases.

The United States Forces Korea on Monday said that a USFK widowed dependent tested positive for the virus. On Wednesday the U.S. reported that a 23-year-old soldier had tested positive and would be treated at Camp Humphreys near Seoul. It said the soldier was originally based at Camp Carroll near Daegu.

South Korea has suspended some unilateral field training, placed 9,570 troops under quarantine and banned most of its enlisted soldiers from leaving their bases. The U.S. military is also urging its personnel to avoid handshakes and large gatherings if possible.

At Camp Walker in Daegu, the U.S. has prohibited active-duty soldiers there from visiting public gatherings and places off-base, such as grocery stores, bars and restaurants, without permission. The infected U.S. soldier at Camp Carroll visited Camp Walker earlier this week.

Col. Edward Ballanco, commander of the U.S. Army Garrison Daegu, said bowling alleys, movie theaters and a golf course at the four U.S. bases in the Daegu region were closed after the soldier’s case was confirmed, and that all restaurants there were only serving take-out meals.

Restaurants, bars and stores near U.S. bases in South Korea have been hit hard by the outbreak. 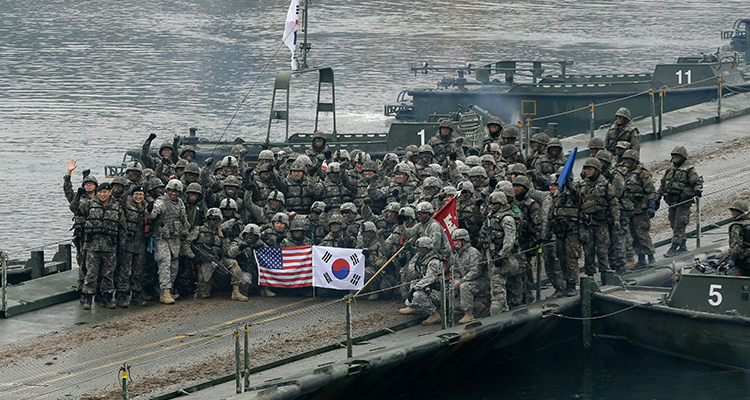 FILE – In this Dec. 10, 2015, file photo, U.S. and South Korean army soldiers pose on a floating bridge on the Hantan river after a river crossing operation, part of an annual joint military exercise between South Korea and the United States in Yeoncheon, south of the demilitarized zone that divides the two Koreas, South Korea. The U.S. and South Korean militaries, used to being on guard for threats from North Korea, face a new and formidable enemy that could hurt battle readiness: a virus spreading around the world that has infected more than 1,200 people in South Korea. (AP Photo/Ahn Young-joon, File)

“The number of customers has been declining outrageously,” said Song Doo Hak, owner of a hamburger restaurant near a U.S. air base near Seoul. “I’ve never experienced this kind of situation.”

“The number of customers has been declining outrageously. I’ve never experienced this kind of situation.” — Song Doo Hak, owner of a hamburger restaurant near a U.S. air base near Seoul

Song said he used to receive about 200 customers, about 40% of them U.S. service members, each day. He said he now receives about 15 customers a day. He said four U.S. soldiers visited his restaurant on Tuesday but none on Wednesday.

“Primero,” a Mexican restaurant near Camp Walker in Daegu, has seen its customers evaporate over the past week. The restaurant’s owner, who asked to be named only by her surname Ji citing privacy concerns, said revenue was down by at least 90%.

Concerned about the possibility that her restaurant becomes linked to a future infection, Ji has closed the dining room and is now serving only take-out meals.

“There’s nothing I can do until the outbreak comes under control,” she said.

After a meeting in Washington on Monday, the U.S and South Korean defense chiefs told reporters that the virus threatens their military exercise schedules.

U.S. Defense Secretary Mark Esper said both countries “are looking at scaling back” some training because of worries about the coronavirus. He added that he is confident that the allies will find a way to protect troops while also making sure that both countries “remain fully ready to deal with any threats that we might face together.”

The U.S. and South Korean militaries have regularly held drills since the 1950-53 Korean War and they have become a major source of animosity with North Korea, which views them as rehearsals for an invasion.

South Korea’s military already had announced plans two weeks ago to sharply reduce the number of personnel it was sending to the exercises from about 400 to 30, all senior level officers to take part only in a command post exercise, not field maneuvers.

North Korea hasn’t officially reported a single case of the new virus. But experts say an epidemic in North Korea could be dire because of its chronic lack of medical supplies and poor health care infrastructure. Pyongyang’s state media has called anti-virus quarantine efforts “a matter of national existence.”

In response to the virus, the North has likely drastically reduced its military activities as well, said Moon Seong Mook, a retired South Korean army brigadier general who participated in inter-Korean military talks.

Related Story: Director of Busiest US Port: Economic Fallout From Coronavirus Appears ‘Much ...

“The North likely reduced training and any other movement of military units as it intensifies national efforts to stem the spread of the virus,” Moon said.

The U.S. military is also taking precautions for its some 50,000 personnel in Japan, which has seen more than 800 people infected by the virus, most of them linked to a cruise ship.

U.S. Forces Japan said Wednesday that it was elevating the health precautions, requiring units to consider limiting or cancelling meetings, training events and large social gatherings as they monitor developments in areas close to American bases.

The outbreak comes at a delicate time in the decades-long alliance between Washington and Seoul. President Donald Trump has openly demanded a big increase in South Korea’s financial contribution to U.S. troop deployment in the country.

Kim Hyo-eun, whose 22-year-old son is performing his mandatory military service at a South Korean army base near Seoul, is watching the situation with increased unease.

“While I am relieved that the infections announced by the military so far haven’t been about my son’s unit, I am still worried because the illness is spreading so rapidly,” she said.

“If the virus continues to spread,” she said, “I think I will have to talk to my son again and ask what I can do to help keep him safe.”