WASHINGTON — President Donald Trump pushed back Wednesday against criticism that his administration isn’t doing enough to meet the coronavirus threat, as lawmakers called for giving disease fighters much more money than the $2.5 billion the White House has requested.

A day after he sought to minimize fears of the virus spreading widely across the U.S., Trump prepared to hold a White House press conference with experts from the Centers for Disease Control and Prevention.

Meanwhile, two new coronavirus cases have been reported in Americans who had traveled on the Diamond Princess cruise ship, health officials said Wednesday. The new cases bring the U.S. tally to 59.

Trump tweeted Wednesday that the CDC, Health and Human Services Secretary Alex Azar and others in the administration are “doing a great job with respect to Coronavirus!” and accused some news outlets of “panicking markets.”

The White House said Wednesday that it had faith in Azar and was not considering appointing a virus czar.

Related Story: CDC Warns It Expects Coronavirus to Spread in US

Trump and members of his administration have been sending mixed messages about the virus.

The CDC on Tuesday warned the American public to prepare for an an outbreak of the disease, which has spawned more than 80,000 cases around the world but relatively few so far in the U.S.

Schumer’s $8.5 billion plan includes $4.5 billion for the Department of Health and Human Services to work to contain the outbreak in the U.S., $1 billion to develop and manufacture a vaccine, $1 billion to help other countries battle the coronavirus, and $2 billion to reimburse states for costs incurred in tackling the outbreak.

The count includes 14 people who traveled back from outbreak areas in China, or their spouses; three people who were evacuated from the central China city of Wuhan; and 42 Americans, passengers on the Diamond Princess cruise ship who were evacuated by the federal government to the U.S. from where the ship was docked in Japan.

But before he flew home from India on Tuesday, Trump said the coronavirus situation is “very well under control in our country.” The administration has asked Congress for an additional $2.5 billion to speed development of a vaccine, support preparedness and response activities, and to gather needed equipment and supplies.

Republican and Democratic lawmakers alike have questioned whether that request is sufficient.

Schumer’s $8.5 billion plan is more than triple Trump’s request. It includes $4.5 billion for the Department of Health and Human Services to work to contain the outbreak in the U.S., $1 billion to develop and manufacture a vaccine, $1 billion to help other countries battle the coronavirus, and $2 billion to reimburse states for costs incurred in tackling the outbreak.

“We will put together a supplemental that will address this issue,” said Rep. Rosa DeLauro, D-Conn., who chairs a key panel that sets spending for health agencies. Aides said the House measure is likely to be unveiled next week. Bipartisan “four corner” meetings — Democrats and Republicans in both the House and Senate — are beginning Wednesday, a House Democratic aide said, with a bipartisan bill the goal. 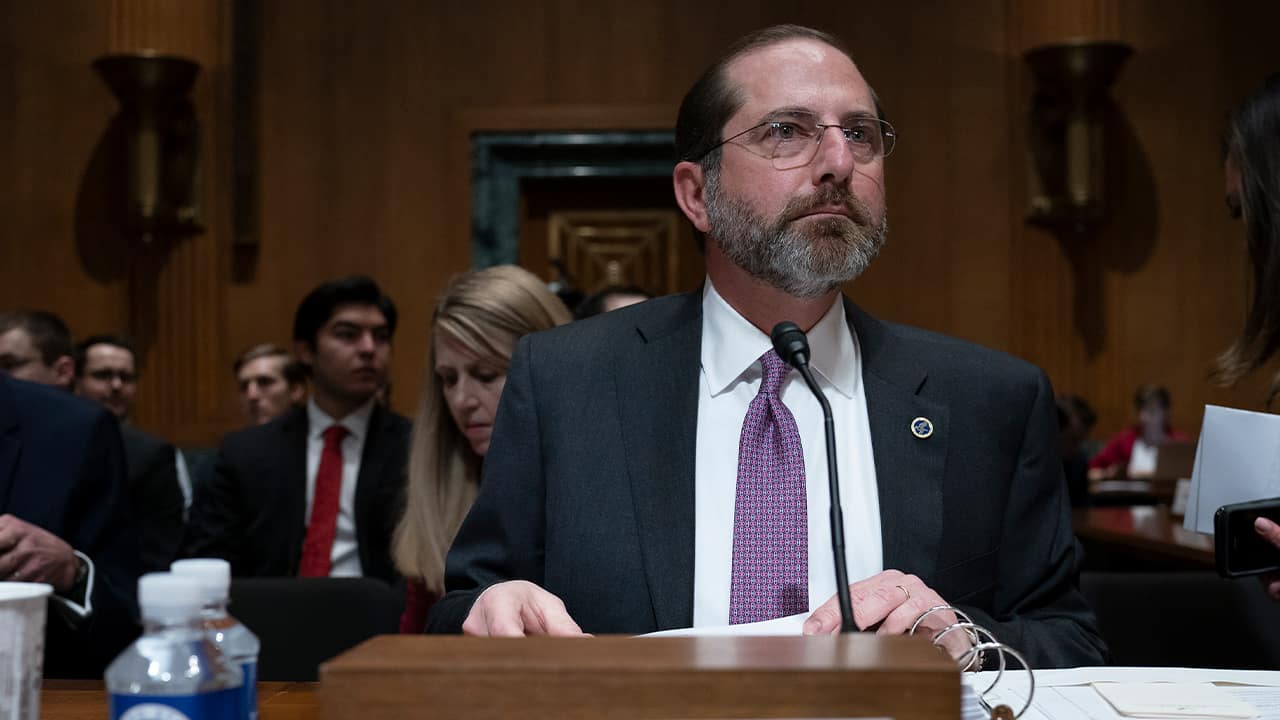 FILE – In this Feb. 13, 2020 file photo, Secretary of Health and Human Services Alex Azar testifies on Capitol Hill in Washington. Democrats controlling the House wrote HHS Secretary Alex Azar earlier this month to request funds to help speed development of a coronavirus vaccine, expand laboratory capacity, and beef up screening efforts at U.S. entry points. Azar is slated to testify before the Senate Appropriations Committee on Tuesday, and the U.S. response to the outbreak is sure to be a major topic. (AP Photo/J. Scott Applewhite)

DeLauro dismissed the White House’s $2.5 billion request, saying the two-page summary appeared to have been put together without much thought. She contrasted it to a 28-page submission from the Obama administration on Ebola.

Testifying before her committee Wednesday, Azar said, “I appreciate your frustration with the two-page letter being the documentation,” but he said he believes $2.5 billion will be enough for now. “If it doesn’t fund it, we’ll come back to you.”

Schumer has been harshly critical of Trump’s response to the outbreak, and his request — announced before the Democratic-controlled House Appropriations Committee has weighed in — rankled some Democrats hoping for quick, bipartisan action to address the crisis.

Arriving back in the U.S. early Wednesday, Trump immediately began to counter critics who say he should have acted sooner to bolster the federal response to the coronavirus.

He tweeted announced that he would be briefed later Wednesday. Then would come the news conference.

The president keeps close tabs on the stock market, seeing it as an indicator that his economic policies are working and frequently boasting of its growth. Markets tumbled Monday by a huge amount and then again on Tuesday, and Trump noticed.

“It’s very clear. If we have a global pandemic, no country is going to be without impact.” — Dr. Anthony Fauci, NIH’s infectious disease chief

White House press secretary Stephanie Grisham also engaged in the pushback after returning with Trump. Grisham retweeted a CDC post that said “there is currently no reported community spread” of coronavirus in the U.S.

This week, the National Institutes of Health received a shipment of test doses of a vaccine candidate from Moderna Inc., in preparation for first-step safety testing in a few dozen people aimed to begin by April. But Dr. Anthony Fauci, NIH’s infectious disease chief, cautioned reporters that in a best-case scenario, “you’re talking about a year to a year and a half” before any vaccine would be ready for widespread use.

Fauci said that while only a few cases have turned up in the U.S. from travelers outside the country, “we need to be able to think about how we will respond to a pandemic outbreak.”

“It’s very clear. If we have a global pandemic, no country is going to be without impact,” Fauci said.

A pandemic involves the continual spread of sustained transmission from person to person in multiple regions and hemispheres throughout the world simultaneously, Fauci noted.