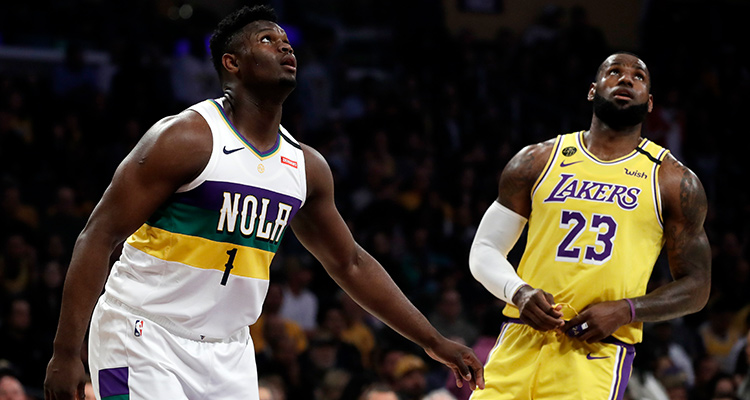 LOS ANGELES — LeBron James sees a long, prosperous future ahead of Zion Williamson and the up-tempo New Orleans Pelicans.
In the immediate present, James and Anthony Davis are a whole lot closer to basketball’s ultimate goal, as they proved in their first meeting with their fellow No. 1 overall draft pick.
James had 40 points and eight rebounds in his first career meeting with Williamson while leading the Los Angeles Lakers to their sixth straight victory, 118-109 over New Orleans on Tuesday night. Williamson was still injured for the Pelicans’ first two meetings of the season with the Lakers, but his delayed debut in Hollywood was as entertaining as everyone hoped. In his 13th NBA game, Williamson scored at least 20 points for the ninth consecutive time, but managed only one field goal in the fourth quarter.
“It was a great experience,” Williamson said. “He’s an incredible player. His resume speaks for himself. … He handled business. He came out here and did what he had to do to help his team get the win.”

‘He’s Going to Continue to Get Better and Better’

The Lakers still haven’t lost to the team with which they made the blockbuster summer trade that has appeared to benefit both teams. Davis has been just as good as the Lakers hoped in propelling them back to NBA championship contention, while the Pelicans are getting an All-Star season from Brandon Ingram alongside Williamson in an increasingly potent core.
Davis had 21 points, 14 rebounds and six blocked shots while improving to 3-0 against New Orleans. Davis and Williamson briefly were theoretical teammates during the time between the draft and Davis’ departure for the Lakers, and Williamson admitted he entertained the idea they might play together, even though Davis had requested a trade.
“He’s a great player,” Davis said of Williamson. “He’s got a quick first step. Very explosive. He’s going to continue to get better and better as he goes on.”
Although Davis missed 15 of his 21 shots and failed to score 40 points against New Orleans for the first time, James picked him up with a masterfully efficient, 17-for-27 performance that included five 3-pointers.
In the Lakers’ first game after an emotional memorial service for Kobe Bryant at Staples Center on Monday, James opened up a close contest with back-to-back buckets at the rim with about three minutes left. Danny Green sealed it for Los Angeles with his fifth 3-pointer with 51 seconds to play.
Ingram had 34 points against his former team, but just six in the final period as New Orleans lost for only the second time in seven games.
Williamson had several impressive dunks in his usual fearsome floor game, and only six missed free throws kept him from surpassing his career high of 32 points.
“(James) might see himself a little bit in Zion, the way they both came in with all the hype,” Lonzo Ball said of his former and current teammates. “I think Bron goes out there and plays his game every night no matter who’s the opponent.” Pelicans: These teams will complete their four-game season series Sunday in New Orleans. … UCLA product Jrue Holiday had 11 points and nine assists, but went 5 for 19 from the field.
Lakers: Davis gave the Lakers a scare midway through the fourth quarter when he appeared to hit his left hand on the glass while blocking Nicolo Melli’s shot. The oft-hobbling superstar stayed in the game after getting treatment during a timeout. Davis apparently had dinged his hand on the Lakers’ previous offensive possession as well. … Davis is the leading scorer and rebounder in New Orleans franchise history, making six All-Star teams during his tenure.

Ball had 10 points, eight assists and eight rebounds, and Josh Hart scored three points in their second return to face the Lakers, who traded them to New Orleans along with Ingram last July for Davis.


“It means everything to be in the purple and gold. Putting on this jersey is really special.” — Markieff Morris

Alex Caruso provided the Lakers with his usual injection of energy in the fourth quarter, particularly with a stunning block of Ball’s shot at the rim that left Ball flat on his back. Caruso finished with eight points and eight assists, including a beautiful between-the-legs drop pass to James for a dunk in the first half. “We play so well together,” James said.

Markieff Morris made his Lakers debut with four points and three fouls in 15 minutes. Los Angeles signed the veteran on Sunday for the playoff push after Detroit bought him out. Coach Frank Vogel plans to ease Morris into the rotation, which he says is already stacked with more quality players than he can use extensively. Morris is expected to see regular time as a backup power forward who can rebound and play solid defense.
“It means everything to be in the purple and gold,” said Morris, who acknowledged being exhausted after several days of personal upheaval. “Putting on this jersey is really special.”

Kobe Bryant Handprints, Other Memorabilia up for Auction