SANTA ANA — A federal judge on Monday ordered U.S. and California officials to answer questions from local officials about plans to relocate former cruise ship passengers who test positive for a new coronavirus to a facility in Southern California.

U.S District Judge Josephine Staton, who had already temporarily blocked federal officials from transferring passengers to the site, said mistakes can be made when acting in haste. She set another hearing to review the issue next Monday.

“There’s just something not right, and we have to question that, because the information that we’re being given is not credible.” — Costa Mesa Mayor Katrina Foley

The contentious hearing lasted more than two hours and was so crowded that some people had to sit on the courtroom floor.

Officials from Costa Mesa, an Orange County city of 113,000, are trying to halt the transfer to their community of patients who were evacuated from a cruise ship in Japan and are under quarantine at Travis Air Force Base in Northern California. Those who tested positive for the virus were sent to area hospitals but can’t be returned to Travis once they no longer need treatment, federal officials said.

City officials questioned why a facility that was recently deemed too dilapidated for a homeless shelter is suddenly being considered for this purpose.

“There’s just something not right, and we have to question that, because the information that we’re being given is not credible,” Costa Mesa Mayor Katrina Foley told reporters after the hearing.

Local officials said they weren’t included in the planning process and want to know what safeguards are in place to prevent the possible transmission of the virus that has caused more than 2,600 deaths, most of them in China. 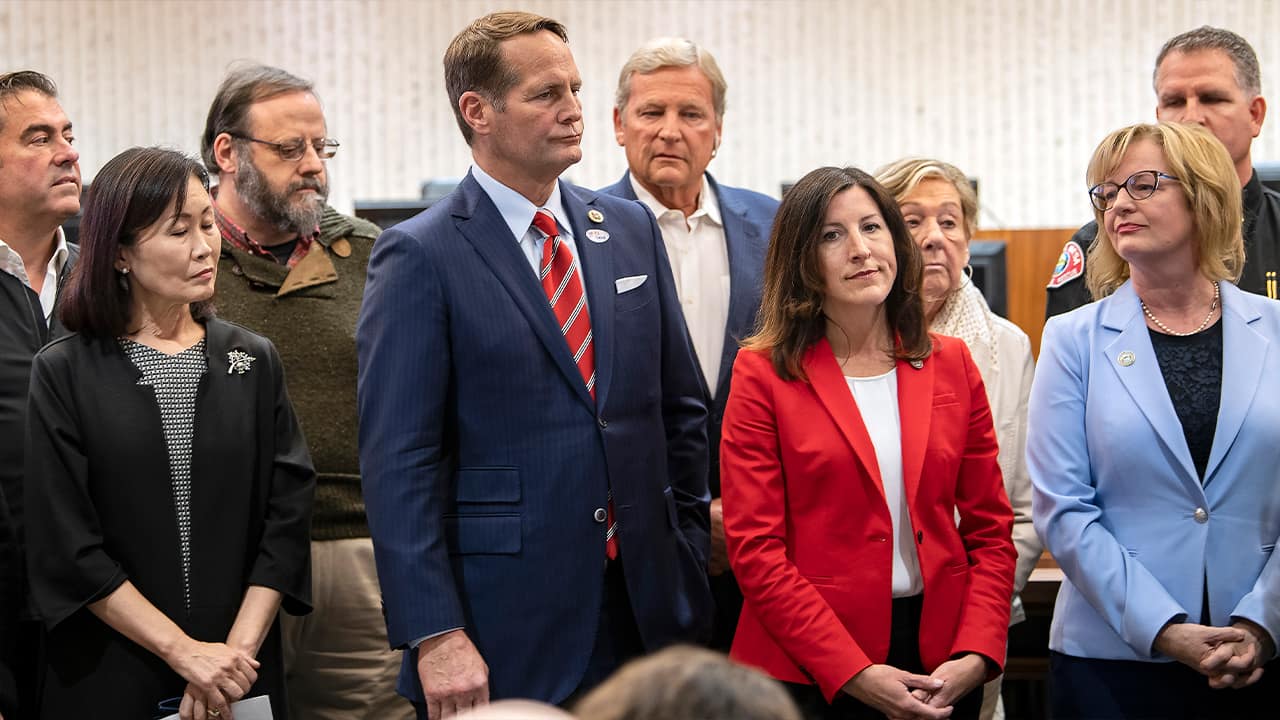 FILE – In this Monday, Feb. 22, 2020 file photo, members of the Orange County Board of Supervisors hold a news conference in Costa Mesa, Calif. U.S. District Judge Josephine L. Staton will hold a hearing about a proposal to house former cruise ship passengers infected with a new virus at a Southern California complex that used to be for people with intellectual and developmental disabilities. U.S. District Judge Staton will hear arguments Monday, Feb. 24, 2020, after temporarily blocking the relocation of people who test positive for the virus from a Northern California military base to the state-owned Fairview Developmental Center. Local officials are protesting they were not including in the planning process and want to know what safeguards are in place. The virus has killed thousands, mostly in China. (Mindy Schauer/The Orange County Register via AP, File)

Roughly 15 of Them Have Tested Positive for the Virus

Jennifer Keller, an attorney from Costa Mesa, told the judge that it made no sense to ship patients with a highly contagious virus to the state-owned Fairview Developmental Center because the 114-acre facility is located near golfers, a neighborhood and a busy street.

Federal officials said about 67 passengers who were evacuated to the air base are from California, and the complex would only be used for state residents. They said roughly 15 of them have tested positive for the virus.

She said U.S. officials had planned to send the passengers to the Federal Emergency Management Center in Alabama. But the site appears to have been removed as an option because of political pressure from that state.

Federal officials said about 67 passengers who were evacuated to the air base are from California, and the complex would only be used for state residents. They said roughly 15 of them have tested positive for the virus.

It was not immediately clear where patients who are not from California and test positive for the virus would be sent.

California officials contend the city doesn’t have the right to interfere with how federal and state authorities are handling the public health emergency. They said many evacuees are elderly and have other health issues, which makes keeping them in-state preferable as they may need to remain isolated from others for a month.

The federal government is requiring its own health agency to find an isolation site in California “that would pose no risk of transmission to the community,” the state’s Health and Human Services Agency said in a statement after the hearing.

“The state is working closely with the federal government to make sure they take every precaution in order to protect public safety,” the statement said.