BEIJING — Inspectors in protective suits went door-to-door Wednesday in the epicenter of China’s viral outbreak to try to find every infected person in an epidemic that is showing signs of waning as new cases fell for a second straight day.

“This must be taken seriously. If a single new case is found [after Wednesday] the district leaders will be held responsible.” — Wang Zhonglin, the city’s newly minted Communist Party secretary

The city of Wuhan, where the new form of coronavirus emerged, was in the final day of a campaign to root out anyone with symptoms whom authorities may have missed so far.

“This must be taken seriously,” said Wang Zhonglin, the city’s newly minted Communist Party secretary, adding that “if a single new case is found” after Wednesday “the district leaders will be held responsible.”

His remarks were published on Hubei’s provincial website, alongside the declaration, “If the masses cannot mobilize, it’s impossible to fight a people’s war.”

Mainland China reported 1,749 new cases and 136 additional deaths. While the overall spread of the virus has been slowing, the situation remains severe in Hubei province, whose capital is Wuhan. More than 80% of the country’s 74,185 total cases are in Hubei and 95% of its 2,004 deaths, according to data from China’s National Health Commission.

Cities in Hubei with a combined population of more than 60 million have been under lockdown since the Lunar New Year holiday last month, usually the busiest time of the year for travel. Authorities put a halt to nearly all transportation and movement except for quarantine efforts, medical care, and delivery of food and basic necessities. “Wartime” measures were implemented in some places, with residents prevented from leaving their apartments. 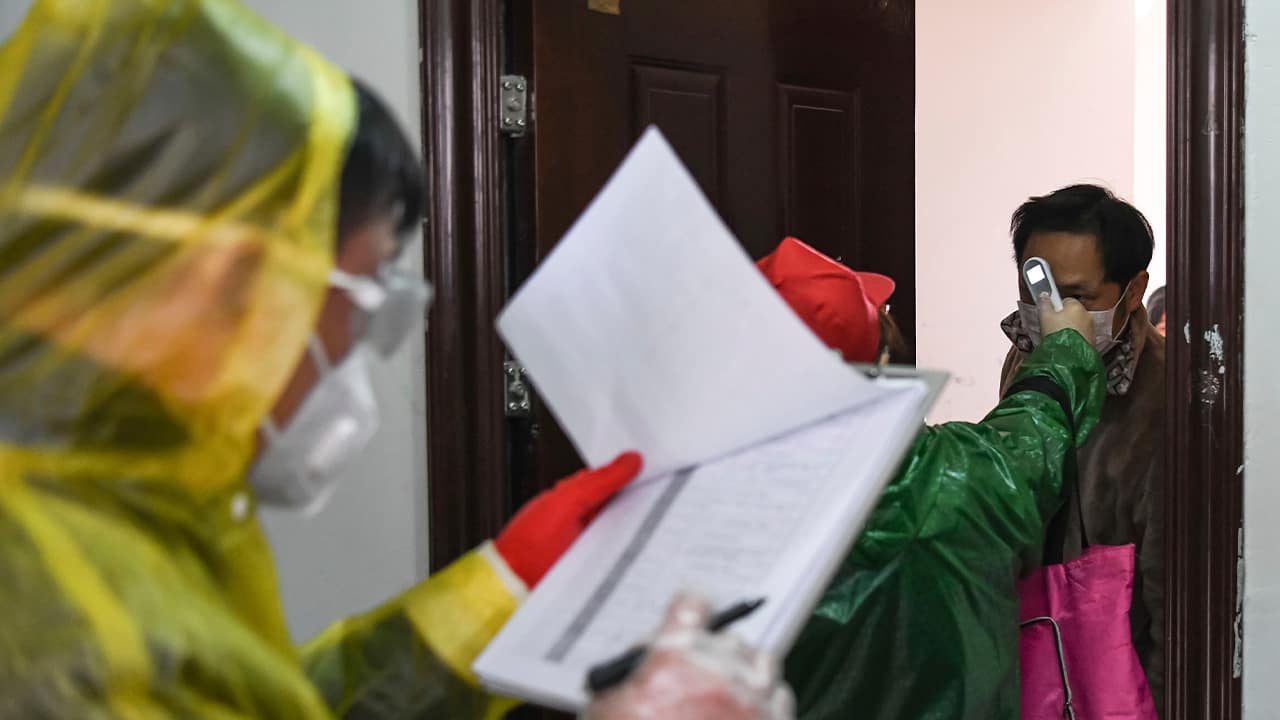 In this Feb. 18, 2020, photo released by Xinhua News Agency, workers go door to door to check the temperature of residents during a health screening campaign in the Qingheju Community, Qingshan District of Wuhan in central China’s Hubei Province. Protective suit-clad inspectors in the epicenter of China’s viral outbreak went door-to-door to find every infected person in the central city suffering most from an epidemic that is showing signs of waning as new cases fell for a second day. (Cheng Min/Xinhua via AP)

Many Countries Have Also Set up Border Screenings

The stringent measures have followed public fury over Hubei authorities’ handling of the outbreak when it began in December. The risk of human-to-human transmission was downplayed, and doctors who tried to warn the public were reprimanded by police. Wuhan residents reported overcrowding in hospitals and futile attempts to seek treatment.

Many countries have also set up border screenings and airlines have canceled flights to and from China to prevent further spread of the disease, which has been detected in around two dozen countries and caused about 1,000 confirmed cases outside mainland China. Six deaths have been reported outside the mainland — two in Hong Kong and one each in Taiwan, Japan, the Philippines and France.

China’s top diplomat, on a visit to Laos, assured his Southeast Asian counterparts that the situation in Hubei province and Wuhan has “been brought under effective control.”

Foreign Minister Wang Yi spoke to diplomats from the Association of Southeast Asian Nations ahead of an emergency meeting on Thursday to discuss the disease. Six countries in the 10-nation bloc have confirmed cases of the new virus.

In Hong Kong, the Hospital Authority reported a 70-year-old man had succumbed to the virus, the city’s second death out of 65 confirmed cases. The victim had underlying conditions including diabetes and hypertension, said Dr Lau Ka-hin, an authority official.

Passengers began leaving the Diamond Princess cruise ship after a much-criticized two-week on-board quarantine in Japan ended on Wednesday, with 79 more virus cases confirmed for a total of 621 — the most in any place outside of China.

South Korea evacuated six South Koreans and a Japanese family member from the ship, and they began an additional 14-day quarantine Wednesday. More than 300 American passengers were evacuated earlier and are being quarantined in the United States, including at least 14 who had tested positive for the virus.

On Tuesday, the U.S. government said the more than 100 American passengers who stayed on the ship or were hospitalized in Japan would have to wait for another two weeks before they could return to the U.S.

Passengers from the MS Westerdam, another cruise ship, have tested negative for the virus, Cambodia’s Health Ministry announced Wednesday.

Seven hundred of the Westerdam’s passengers had already left Cambodia after the ship docked last week, only to have one woman test positive for the virus when she arrived in Kuala Lumpur, Malaysia. The discovery that the 83-year-old American woman harbored the virus caused the suspension of plans to send home the other passengers still in Cambodia.

The dispersal of those who had already left for various countries has caused concern that they might be undetected carriers of the virus, and health authorities in several nations were tracing them to take protective measures. 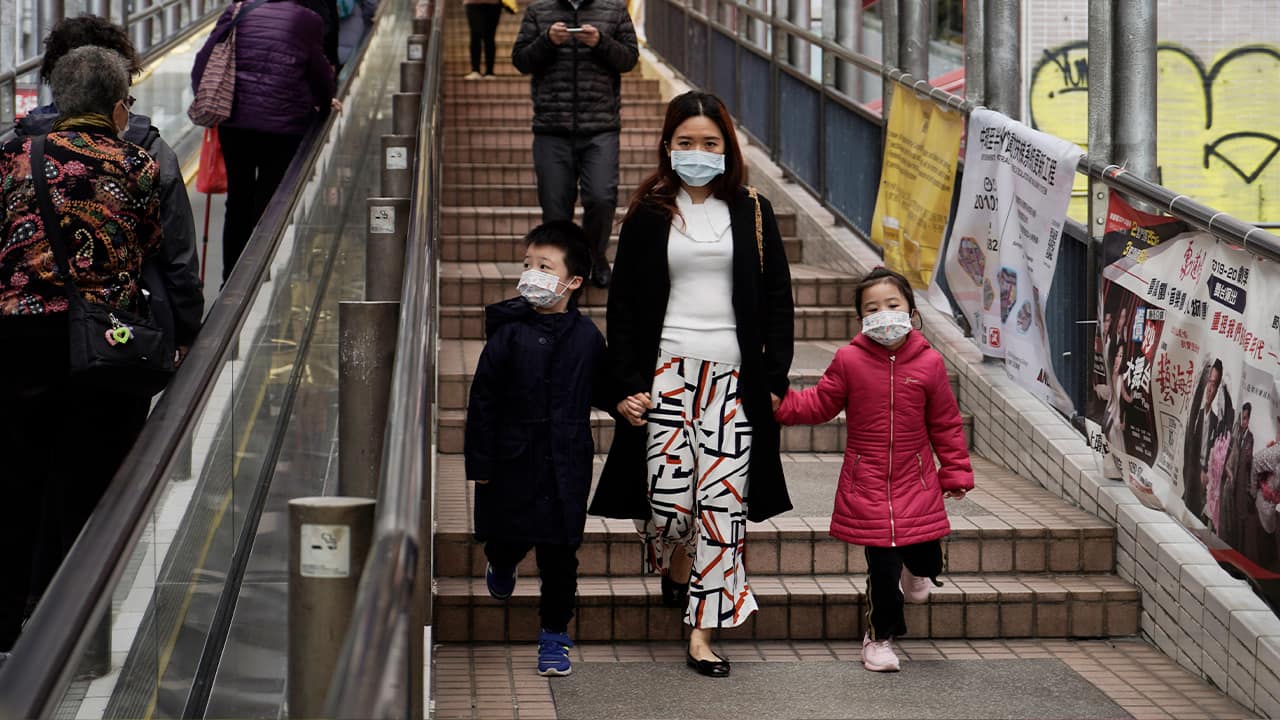 People wearing masks, walk on street in Central, a business district in Hong Kong, Wednesday, Feb. 19, 2020. Russia says it will temporarily ban Chinese nationals from entering the country amid the outbreak of the new virus centered in China that has infected more than 73,000 people. (AP Photo/Kin Cheung)

Beijing Was Showing Signs of Coming Back to Life This Week

Outside Hubei, other localities have imposed quarantine measures to varying degrees. Residential neighborhoods in Beijing have placed limits on the number of people per household who can go out, and those who do must carry exit-entry cards. In Shanghai, police detained a man for 10 days for repeatedly leaving his house and taking public transportation when he was supposed to be under quarantine at home.

China said it was expelling three Wall Street Journal reporters over a headline for an opinion column that referred to the current virus outbreak in China and called the country the “Real Sick Man of Asia.”

Despite such warnings, Beijing was showing signs of coming back to life this week, with road traffic at around a quarter of usual, up from virtually nothing a week ago. While most restaurants, stores and office buildings remained closed, some had reopened.

China said it was expelling three Wall Street Journal reporters over a headline for an opinion column that referred to the current virus outbreak in China and called the country the “Real Sick Man of Asia.”

Long sensitive to its portrayal in global media, China has been pushing a narrative of transparency and tight control over the current outbreak, while emphasizing the sacrifices made by its health workers and ordinary citizens.